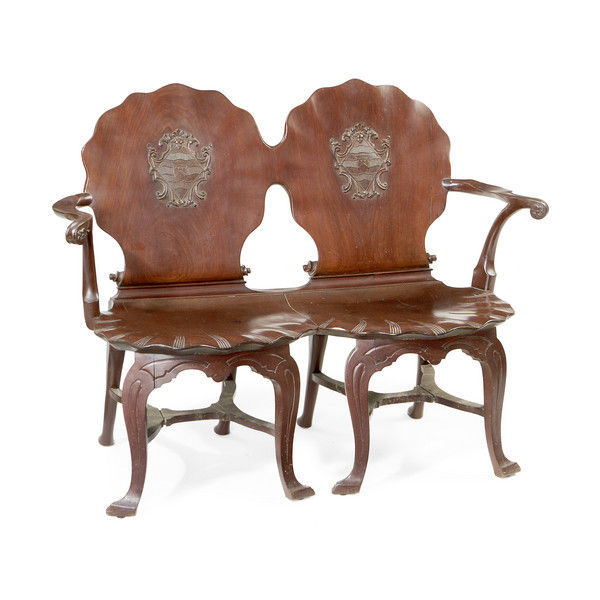 Literature: This double chairback settee relates to illustrations found in the 1763 edition of Thomas Chippendale’s Gentleman and Cabinet Maker’s Director. Plate XXIV shows three influential Chippendale designs for Garden Seats, but it is figure C from this page of drawings which is especially significant in relation to the present lot, since this illustrates an open armchair with a similar back and seat both carved in the form of a shell. The renowned cabinet maker notes that this design is ‘proper for Grottos’. A long seat, its back centred by a shell which ‘may be placed in Walks, or at the end of Avenues’, is also illustrated on the same plate. Chippendale goes on to state: ‘The backs may be cut out of the solid Board, and fixed on the Back Edges of the Seats’, and this can be seen in the seat construction of the above settee. The elegant S-shaped profile and form of the front legs, evident on the present example, appear in the drawings on plate XVII of The Director. Chippendale notes these designs as suitable for ‘Halls, Passages, or Summer-Houses’.

The coat of arms carved to the centre of both chairbacks belong to the Drummond family of Scotland, with the Clan’s ancestral home being that of Stobhall Castle in Perthshire. However, the particular branch of the family cannot be completely identified.

A number of similar chairs and settees of this type and form have been found, and include; a suite comprising ten chairs and two settees from Tehidy Park, Cornwall, carved with the Armorial arms of Basset quartering Pendarves impaled with St Aubyn, also a set of ten side chairs and two armchairs from Tythrop Park, Oxon. Those with painted crests, and a set of six padouk side chairs and two armchairs, from St. Giles’ House, Dorset. Interestingly, all of these examples have backs and seats in the form of shells, supported on frames and legs of the same profile as the present lot.