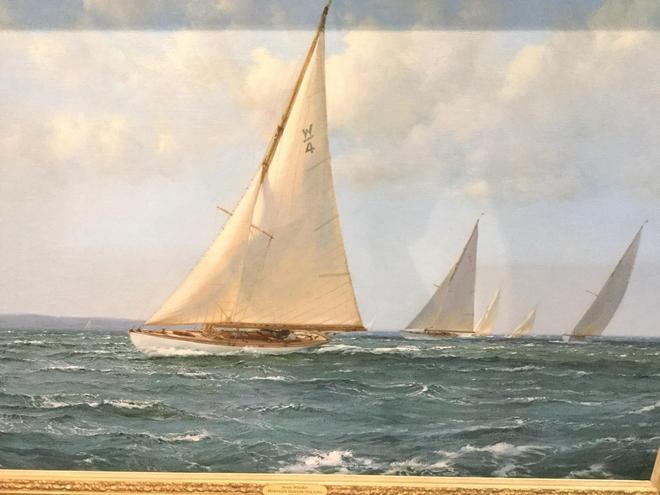 Well actually Florida has not been fair weather wise. Miami was chilly with such torrential rain we had to purchase an umbrella and the roads flooded instantly. However with the excellent drainage and warmth everywhere was dry by the next day, and of course we do not spend much time outside. Palm Beach is very cold even by English standards and the locals are wearing coats indoors.

However buying wise the Miami Fair was good. Charlie bought a fabulous micro mosaic, this meat trolley, a pair of Orientalist mirrors which used to hang in Helena Rubinstein’s salon (this detail of one of the faces shows just how fantastic the carving is) and an Unterberger carved wooden picture. Caroline found some of her favourite 20th century cloisonné vases and unusually two Islamic items – a rare piece of Islamic pottery and a Balkan silver bowl.

In Palm Beach we had two amazing coincidences with Montague Dawson oil paintings. The first was of a clipper called ‘Hawaiian Isles’ who, when we researched her, turned out to have been renamed ‘The Abraham Rydberg’ in 1929. She was the first ship Charlie’s father served on as a junior officer. In those days, he was fond of telling us, the crew had 1litre of water per man to drink and wash in, hammocks for sleeping and weevils in the biscuits. He was rather envious of his fellow cadets from the sail training ship ‘Worcester’ because they all joined luxury cruise ships but his father insisted he had to ‘start at the bottom on a proper ship’. War was declared during his first passage from South America to the Baltic so he jumped ship in the Bahamas to join the Royal Navy. In the second painting West Wight One Design yacht are racing in the Solent. This class was built by the world-renowned Berthon Boat Company in Lymington less than a mile from our Showroom. Also on the stand we have our normal blend of maritime and library furniture and Japanese works of art.