Once more the highlight of our year is upon us – Masterpiece. Although furniture is seeing a welcome resurgence in popularity and price in the salerooms, we are putting works of art at the heart of our stand. There is particular focus on metalwork, ivory and textiles, with Japanese craftsmanship to the fore. Having said that, arguably one of our most collectable and sought after offerings, is British. The £50 Lloyd’s Patriotic Fund sword above, made of blued steel with lavish gilt mounts and a shagreen scabbard, was awarded to ‘Lieut. James Boxer R.N. of H.M.S. ANTELOPE for his gallant conduct on the capture of the Dutch armed galliot SCHRIK by the boats of the ANTELOPE and MAGICIENNE in the night of 23rd. March near Zeurick Zee’ 1804. Swords of £30, £50 and £100, according to rank, were awarded for gallantry in naval actions with an additional, even more elaborate £100 sword, created for the Trafalgar Captains.

Other metalwork includes two pairs of exhibition quality bronze vases. One pair shows sparrows on flowering branches picked out in silver, gilt and shakudo with an attractive mottled patination on the bases. The other pair features high relief carp with shakudo eyes swimming amongst gilt water weed and swirling silver ripples, supported on very unusual stands in the form of tree trunks holding them above the eddying waters of the stream. In the centre is one of Charlie’s favourite eagles by Gyokko, with a massive three foot wingspan as he unfurls them to take flight.

Ivory is represented by a collection of four 19th century German tankards beautifully carved with bacchanals and classical feasts, with abundant nymphs and putti, satyrs and swags. Two are shown above. The one on the left shows an enthroned goddess surrounded by cavorting nymphs and on the right we have the abduction of Persephone by Pluto in a chariot and the goddesses Aphrodite, Athena and Hera. In the centre is one of two Japanese shibayama and lacquer panels of flowers and butterflies, this one with a superb carving of a feathery peony in a suspended flower basket.

Charlie has also added some of his more unusual finds. On the left we have two fine walnut figures by Jean-Paul Mazaroz, (1823-1900) of two pages, one dressed as a fisherman and the other a falconer. Then there is the most extraordinary large Japanese wall-hanging with embroidered, couched and appliqued sages by a waterfall and finally, representing furniture, a pair of striking side tables in the form of Moorish acrobats doing hand stands and balancing trays on their feet.

We hope to see you during our week at the show and don’t forget to pop into the shop as you will go right past it to get to the Show from Sloane Square. If you would like tickets left at the door, rather than going through the online link below, please ring Charlie on 07768 877069 or email charles@wickantiques.co.uk

Dates for your Diary
Masterpiece

Please click the image below to download your ticket.
This can be printed, or downloaded to your phone, as many times as you wish. 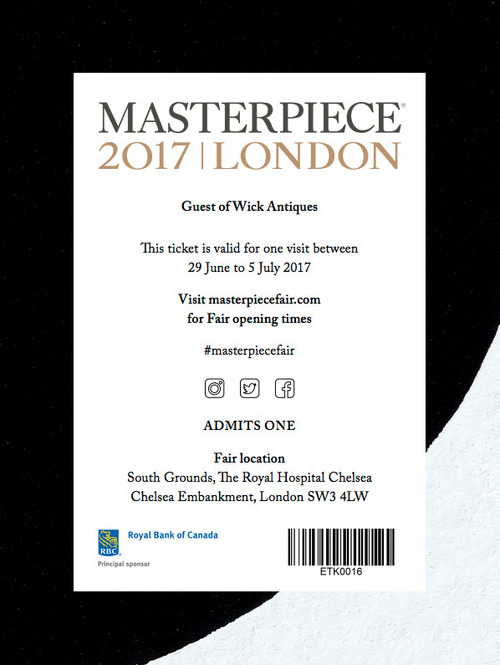