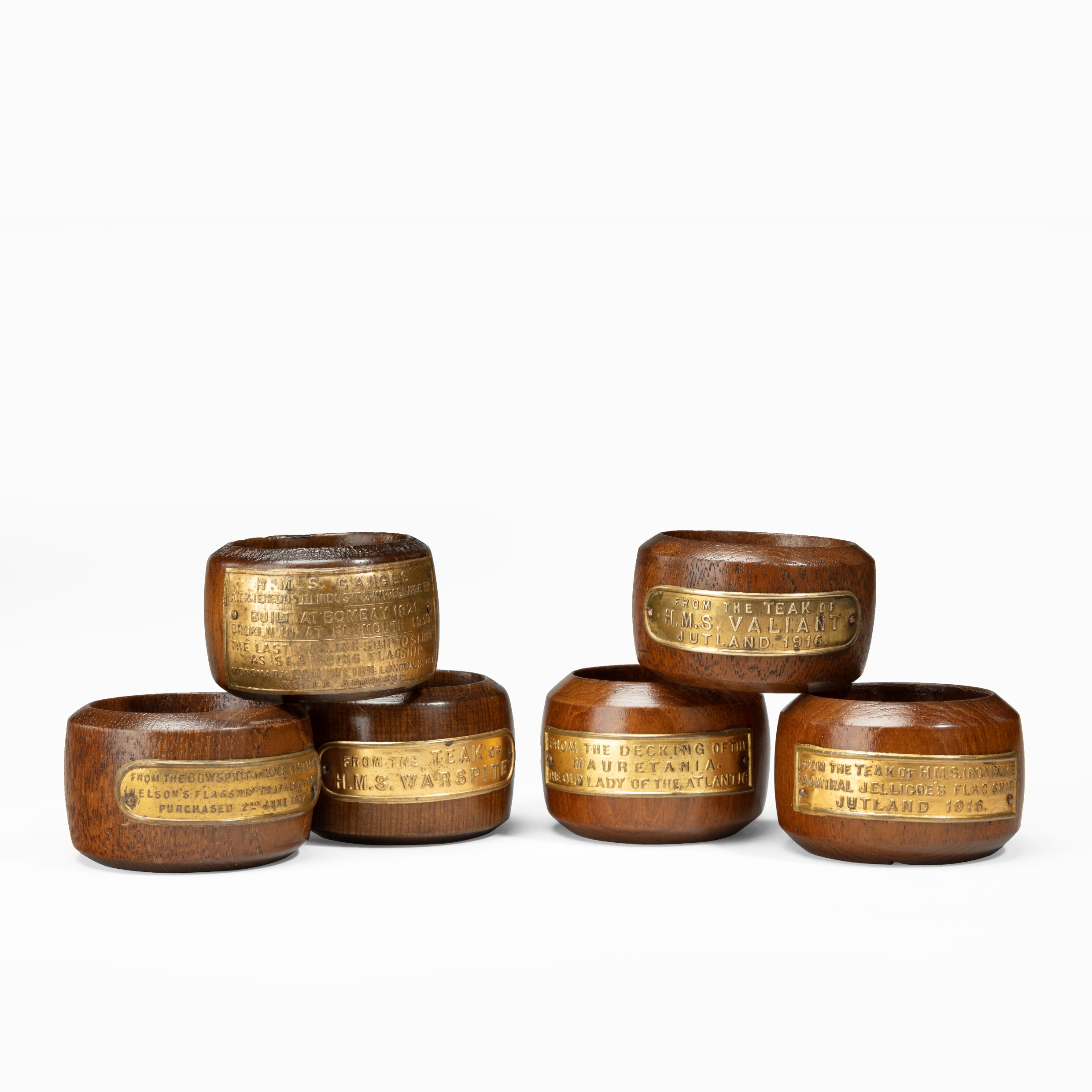 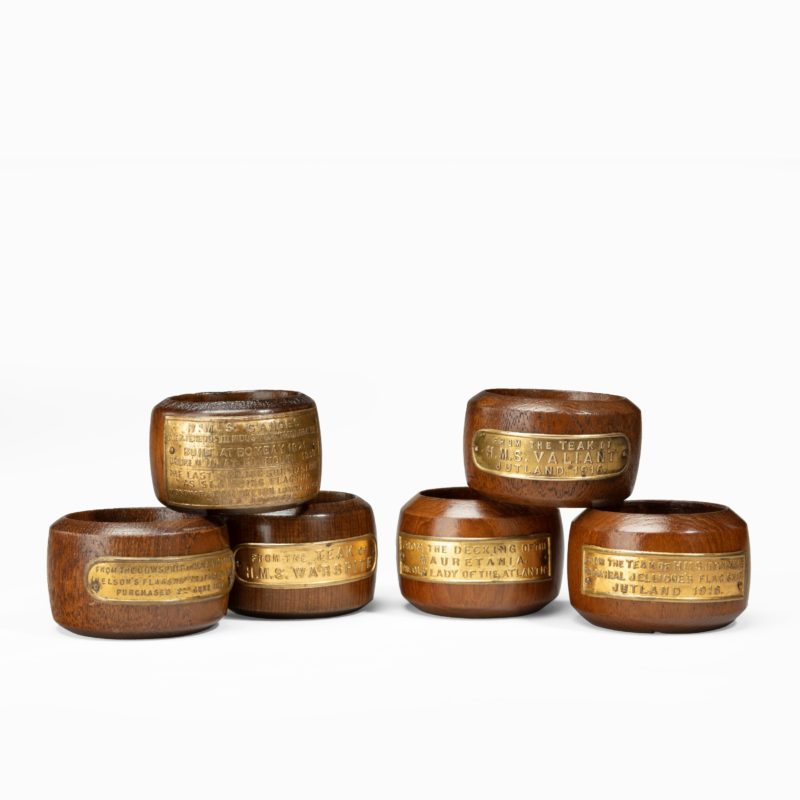 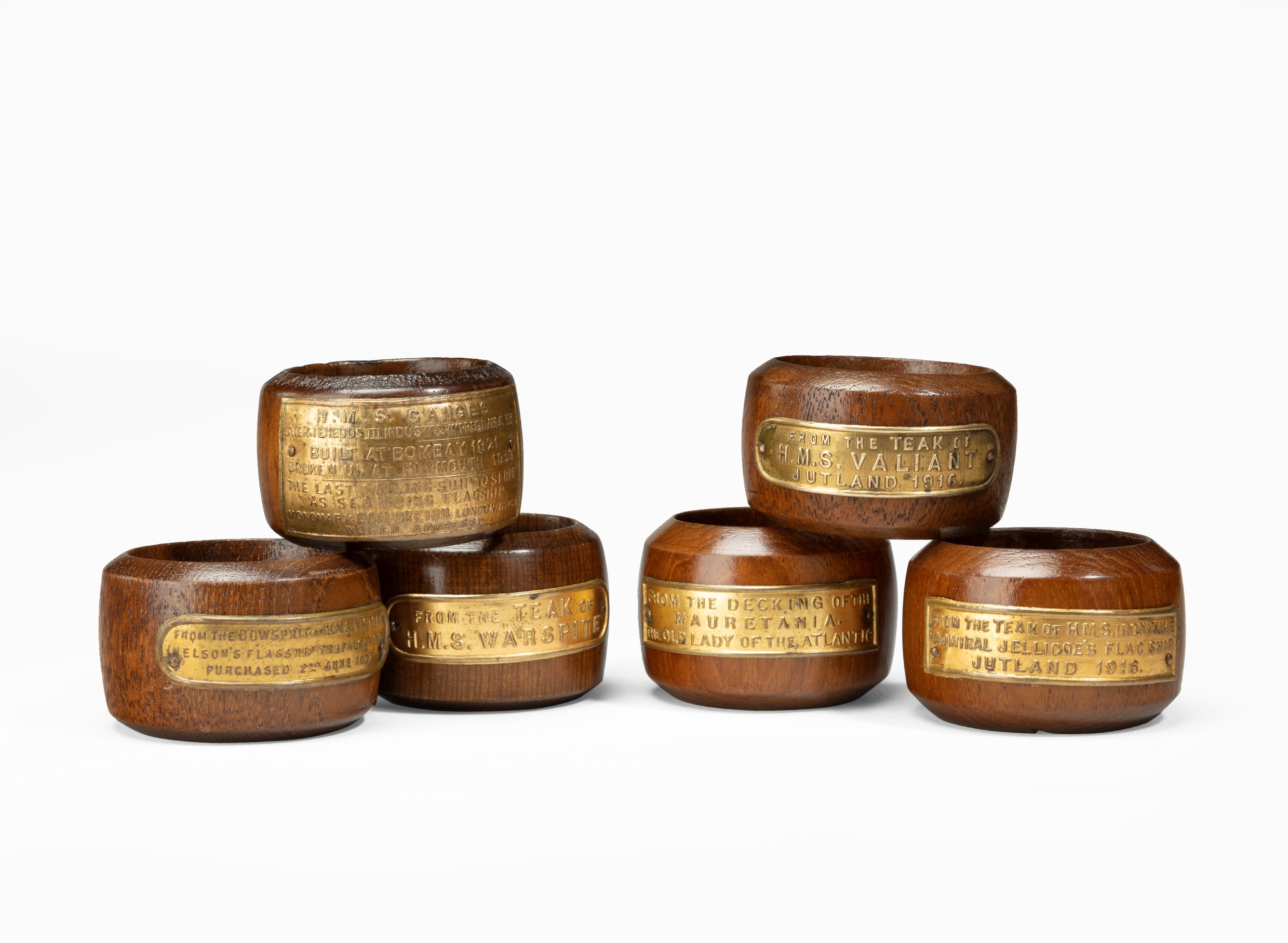 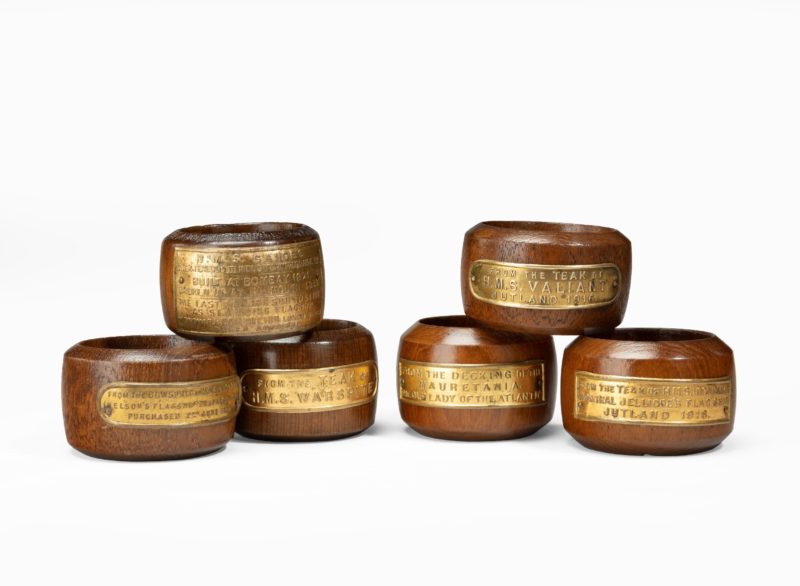 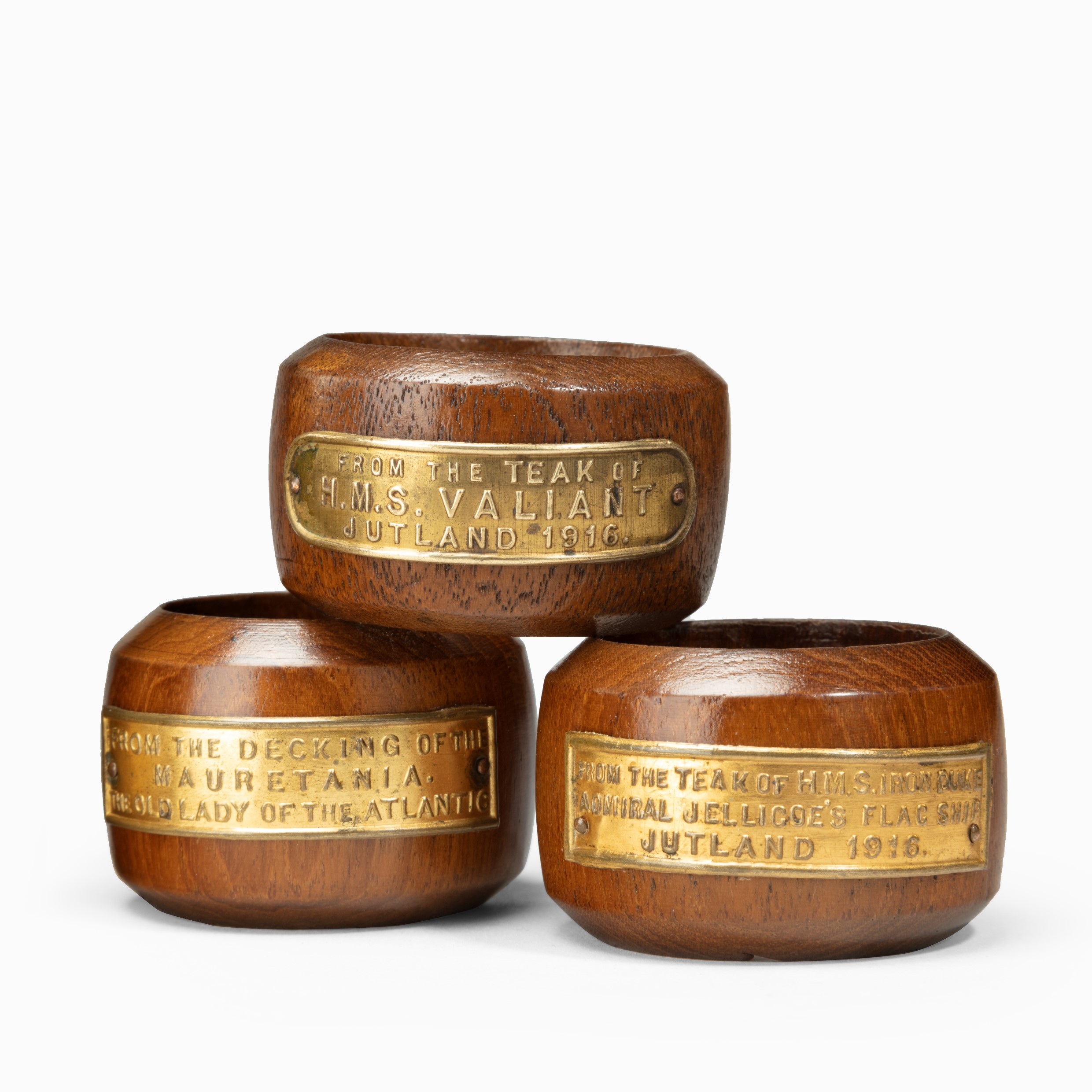 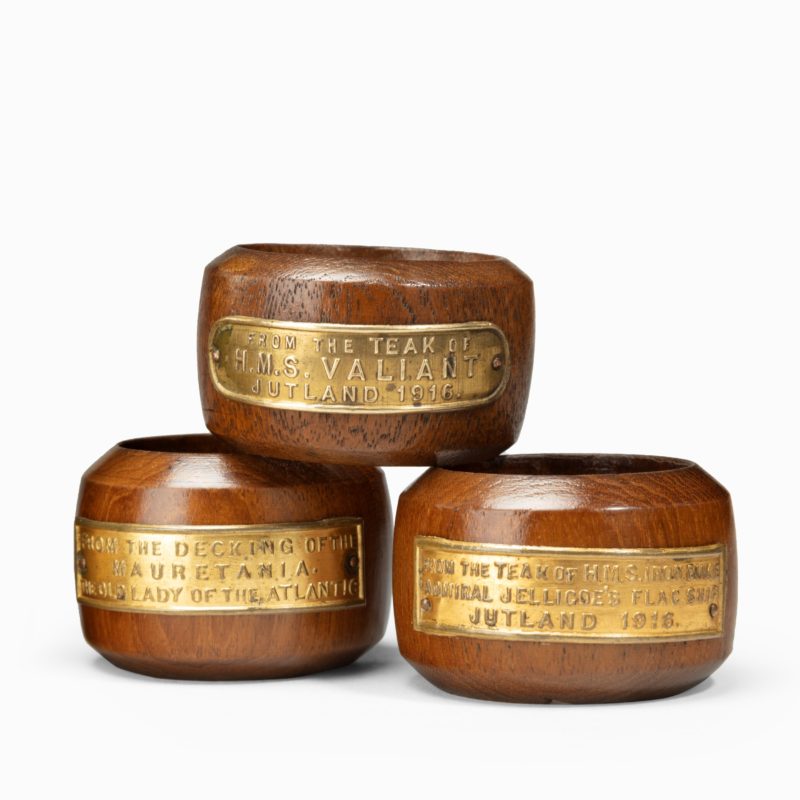 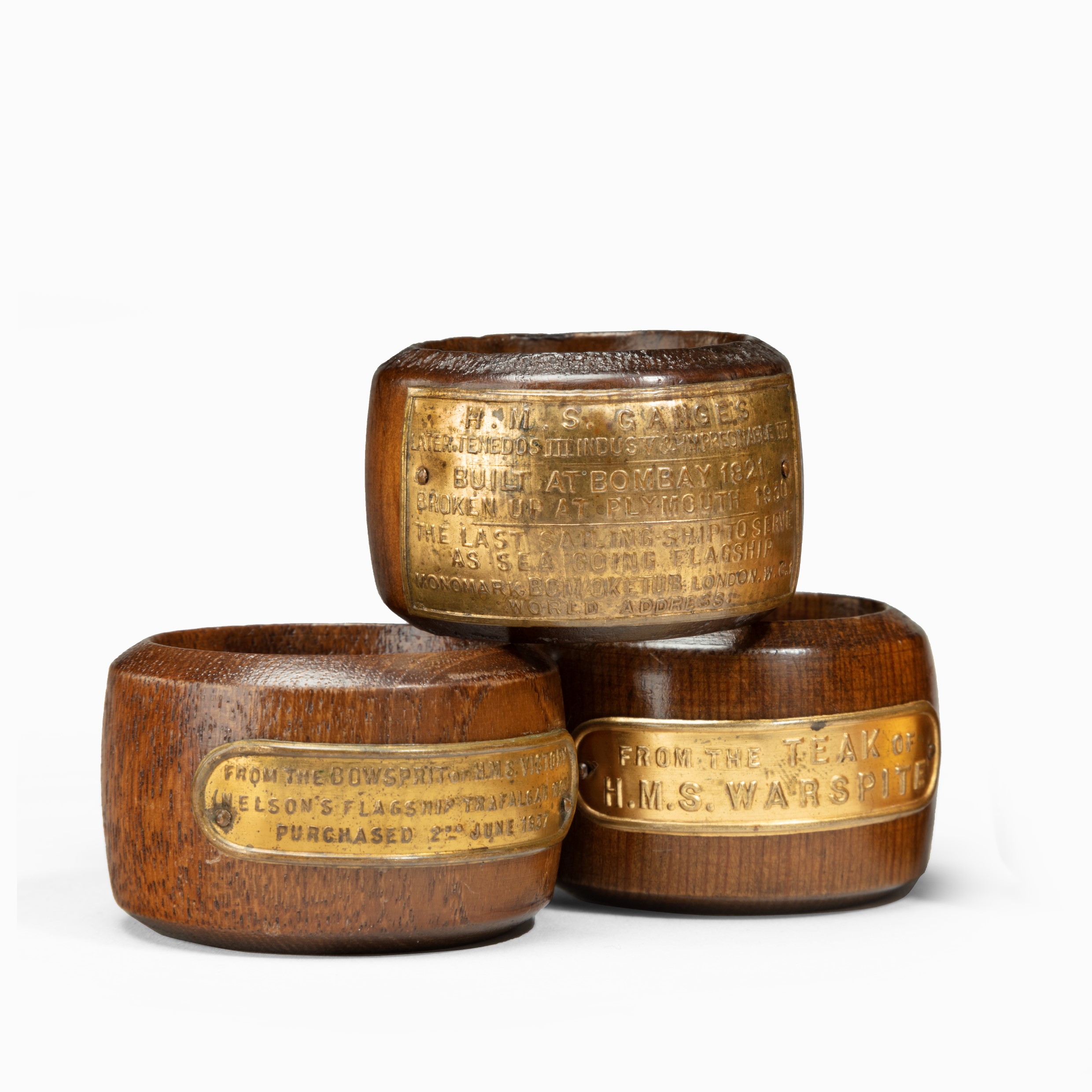 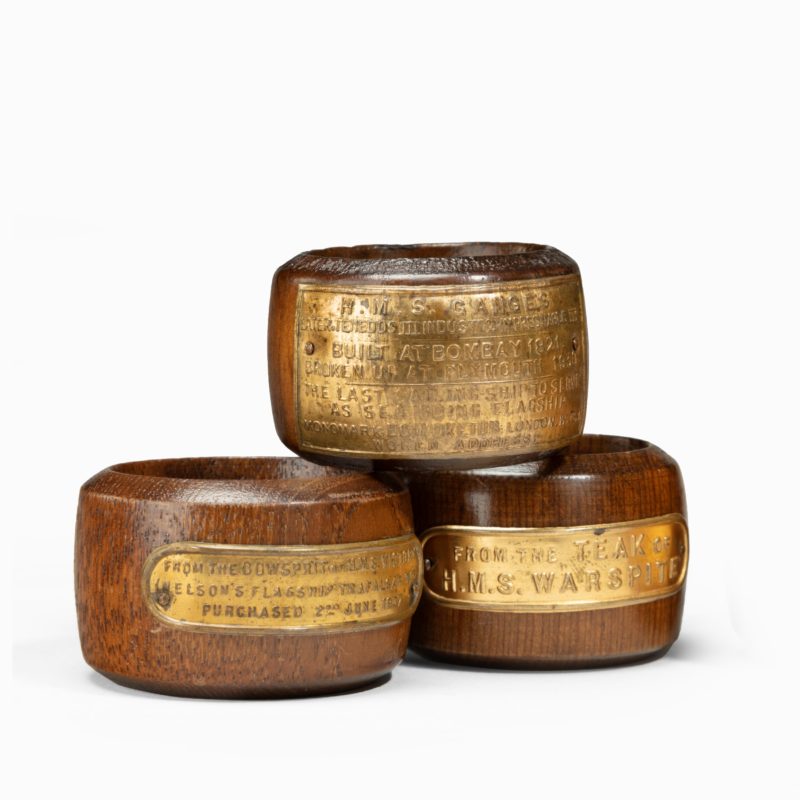 A collection of napkin rings made from ships’ timbers

HMS Victory is a 104-gun first-rate ship of the line and Admiral Lord Nelson’s flagship at the Battle of Trafalgar, 1805. She was also Keppel’s flagship at Ushant, Howe’s flagship at Cape Spartel and Jervis’s flagship at Cape St Vincent. One hundred years ago, she was moved to a dry dock at Portsmouth and has been the flagship of the First Sea Lord since October 2012, making her the world’s oldest naval ship still in commission, with 244 years’ service as of 2022.

HMS Ganges was an 84-gun second-rate ship of the line built of teak in 1821 at Bombay Dockyard under master shipbuilder Jamsetjee Bomanjee Wadia. From 1823 until 1865 she served in varied locations from the South America Station to the Mediterranean and was flagship of the Pacific Station. She was converted to a training ship in 1865 and changed name several times. Once broken up in 1930, the panelling in the captain’s cabin was purchased by Thomas Nelson, 4th Earl Nelson, who installed it in the principal top-floor room at Trafalgar Park in Wiltshire and the captain’s stern cabin survives in the Burgh Island Hotel in Devon.

HMS Iron Duke served as Lord Jellicoe’s flagship for the Grand Fleet in World War I, including at the Battle of Jutland in 1916. There, she inflicted significant damage on the German battleship SMS König in the main fleet action.

HMS Valiant was one of five Queen Elizabeth-class battleships built for the Royal Navy during the early 1910s. She was part of the Grand Fleet in World War I and participated in the Battle of Jutland.

HMS Warspite was also a Queen Elizabeth-class ship at the Battle of Jutland and she continued to serve her country into World War II including in the Norwegian Campaign (1940), the Battle of Crete (1941), with the Eastern Fleet in the Indian Ocean (1942) and at the Normandy Landings. These actions earned her the most battle honours ever awarded to an individual ship in the Royal Navy.

RMS Mauretania, owned by the British Cunard Line, was the world’s largest ship in 1906. She won the Blue Riband eastbound on her maiden voyage in December 1907 and westbound in 1909. She held both speed records for 20 years.