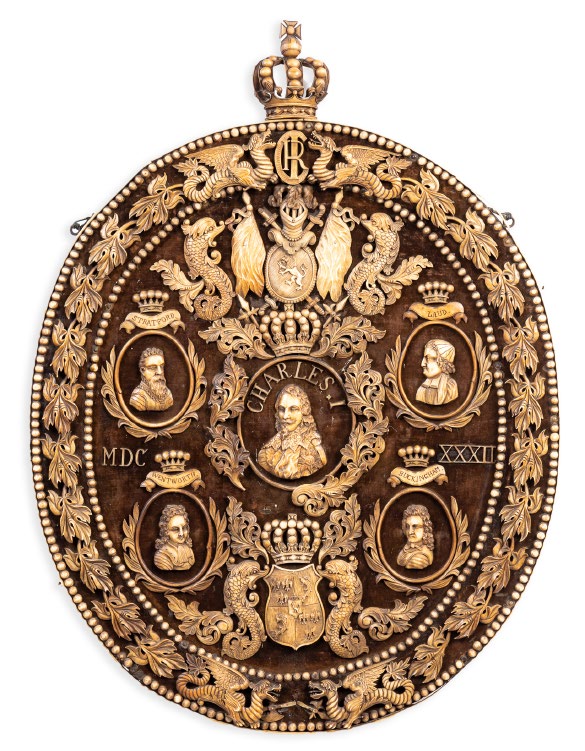 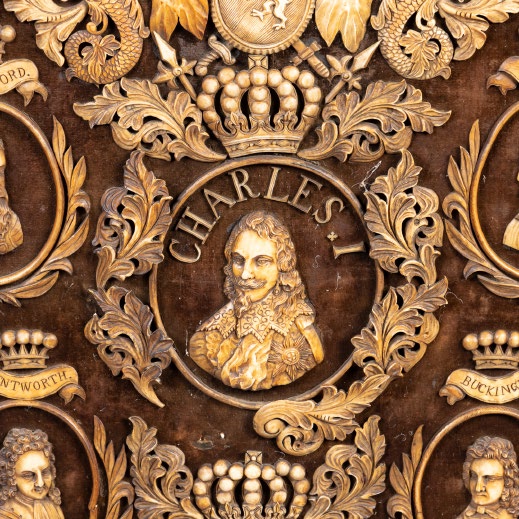 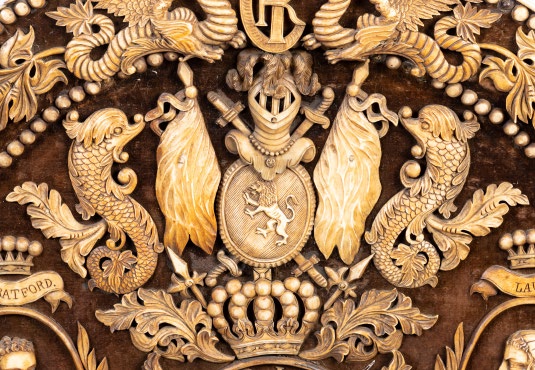 This prisoner of war bone wall panel has a central roundel depicting Charles I and four of his closest advisors, William Laud, Archbishop of Canterbury, George Villers, Duke of Buckingham, Thomas Wentworth, Earl of Strafford and Lord Stratford (more likely Richard Weston, Earl of Portland), on a brown velvet ground. In addition, there is a large coat of arms flanked by banners and dolphins above and royal crown and the arms of the Dauphin of France below, all in a border of confronting dragons and pendent bellflowers. The date 1632 is written across the centre in roman numerals and the frame is surmounted by crown. English, circa 1850.

This work is centred around a portrait of Charles I after a painting by Van Dyck which was later copied by a variety of printmakers in the 17th century and beyond. Comparison with an early 18th century print after the Van Dyck painting by the celebrated John Faber shows that the carver has copied the way that the King’s hair falls across his ruff, the Garter Star on his shoulder and the distinctive curl of his moustache. The carver’s use of the date 1632 on the plaque is somewhat mysterious. It may refer to Van Dyck’s appointment as Charles I’s court painter in this year – all of those depicted on this plaque were painted at some stage by the great artist.

The figure labelled “Stratford” is probably a confusion between ‘Stratford’ and ‘Stafford’ as the later title was not created until some centuries later. The portrait is almost certainly a likeness of Richard Weston, Earl of Portland, who served as Chancellor of the Exchequer under both James I and his son Charles I. The addition of the arms of the French Dauphin, marks a brief period in the 17th century when England and France were allies. The wood and ivory carvers of Dieppe were considered experts in their craft and, gradually, the term became synonymous with the large variety of carved bone and marine ivory artefacts produced by French prisoners of war and then sold to augment their meagre rations.