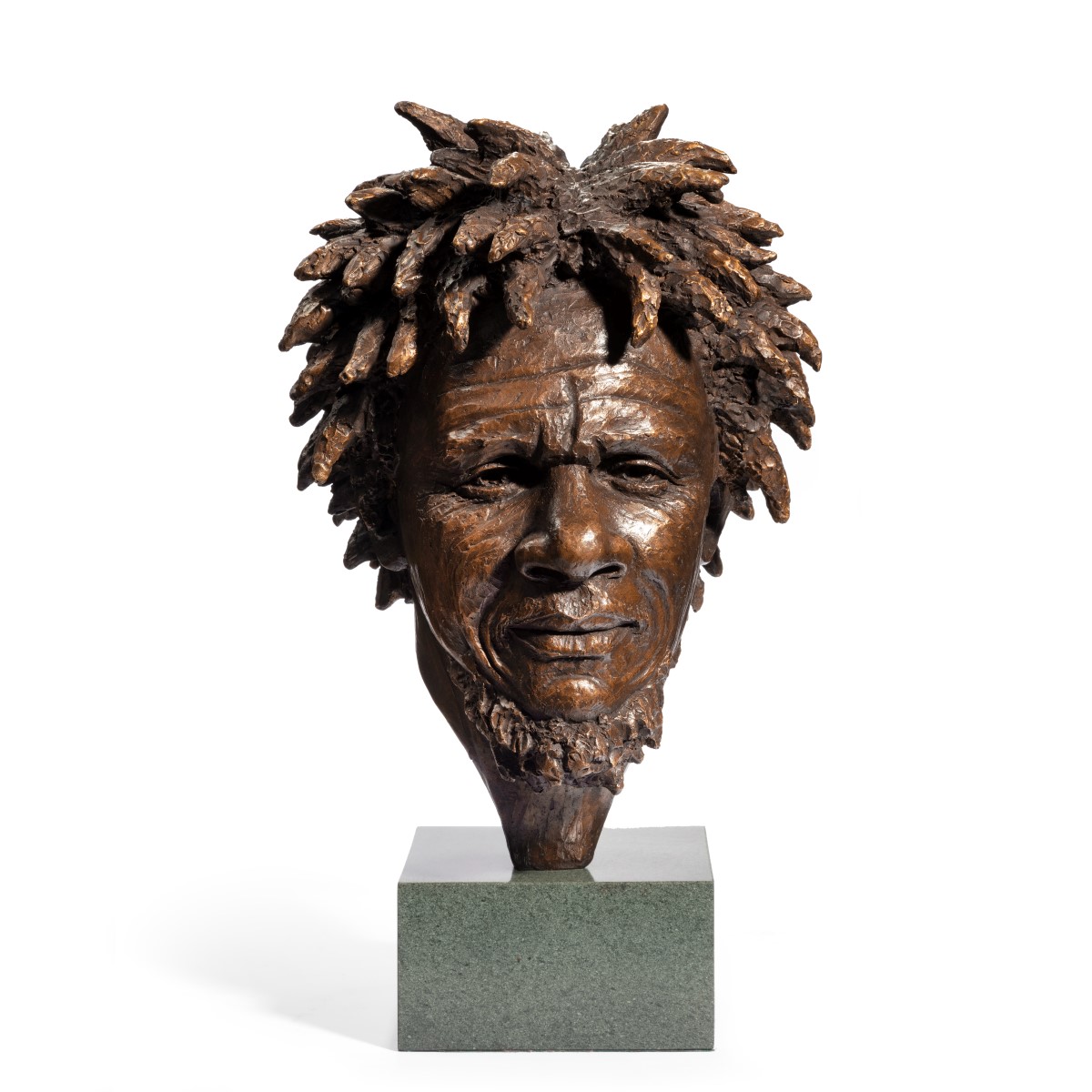 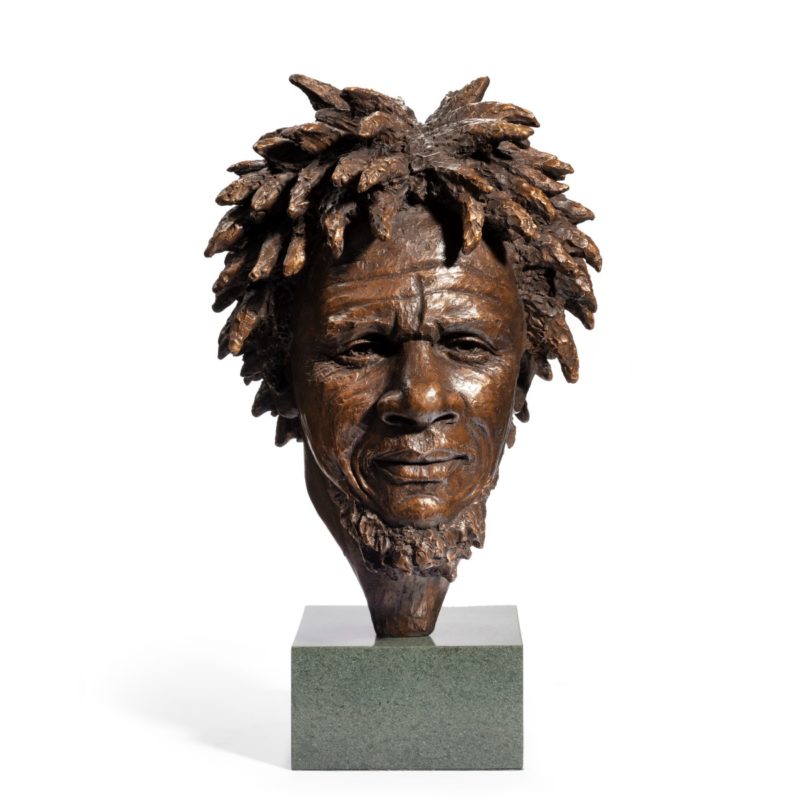 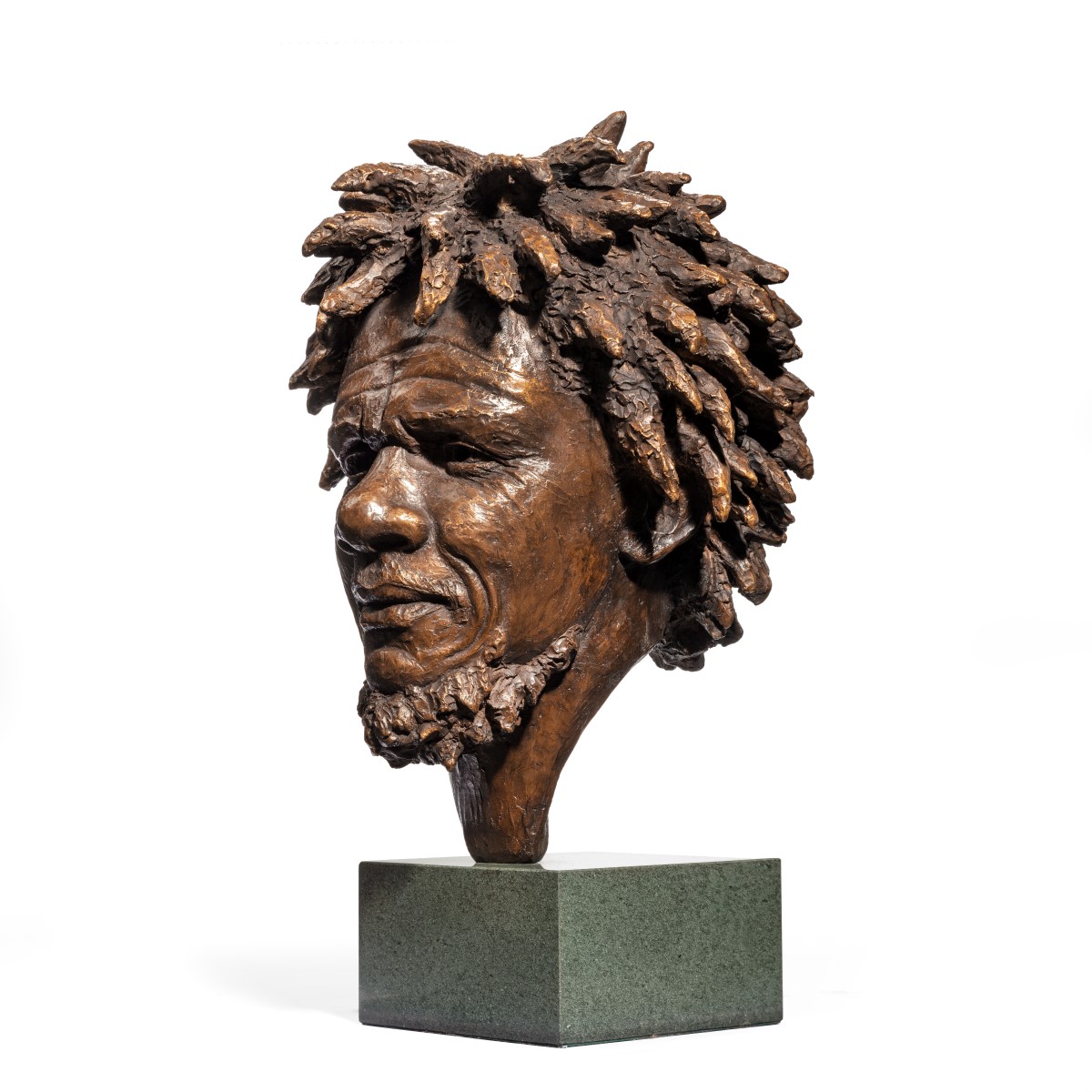 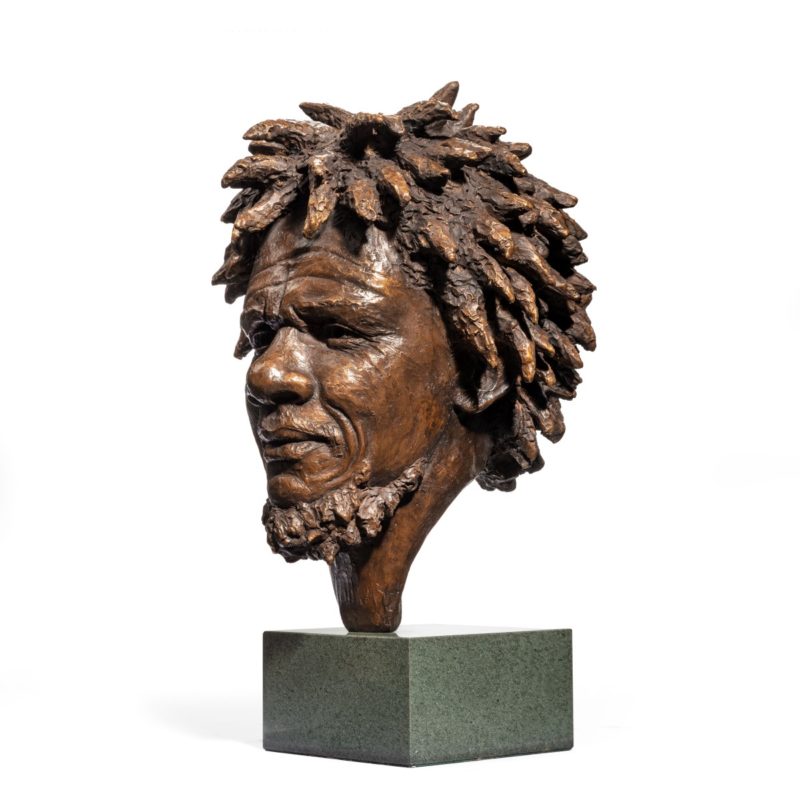 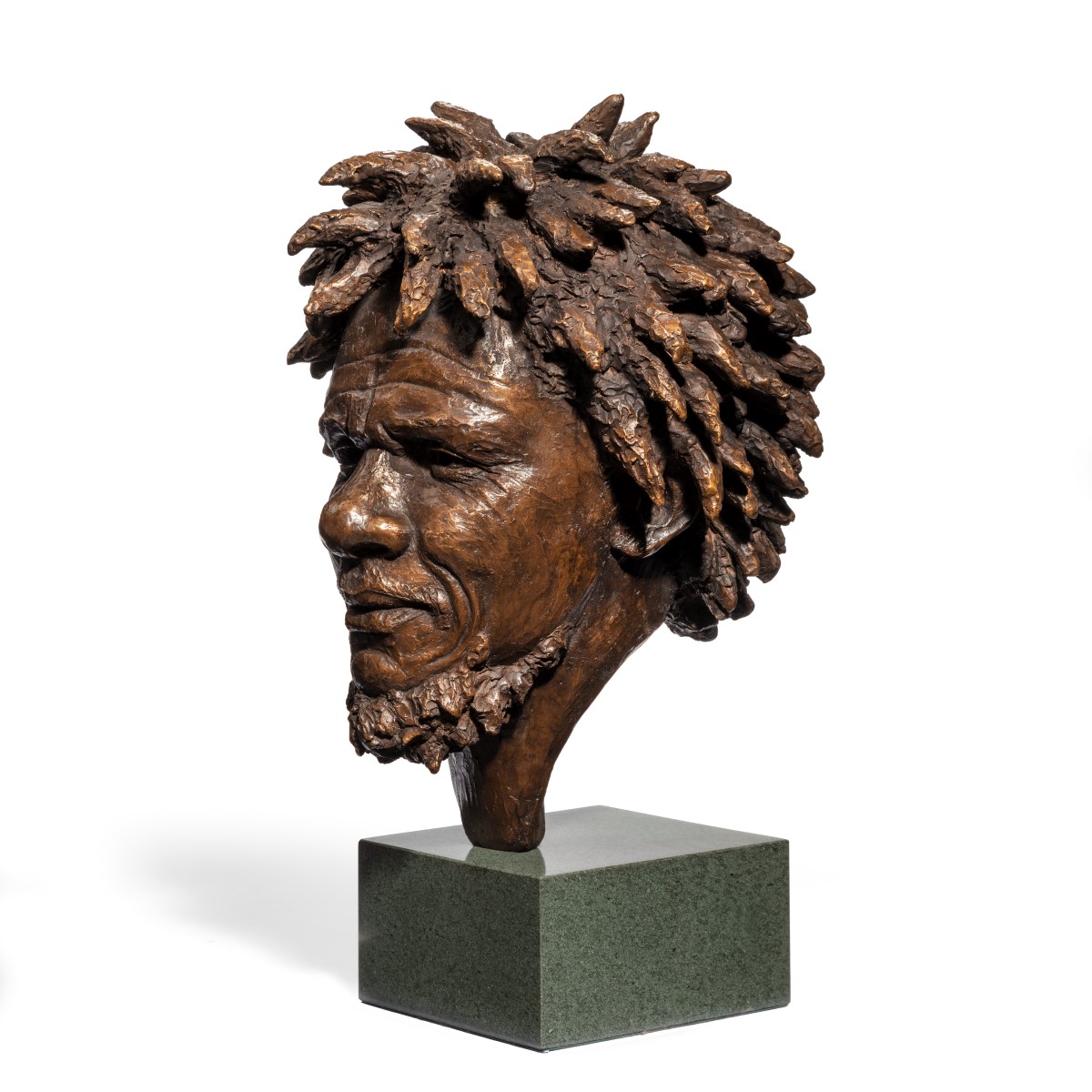 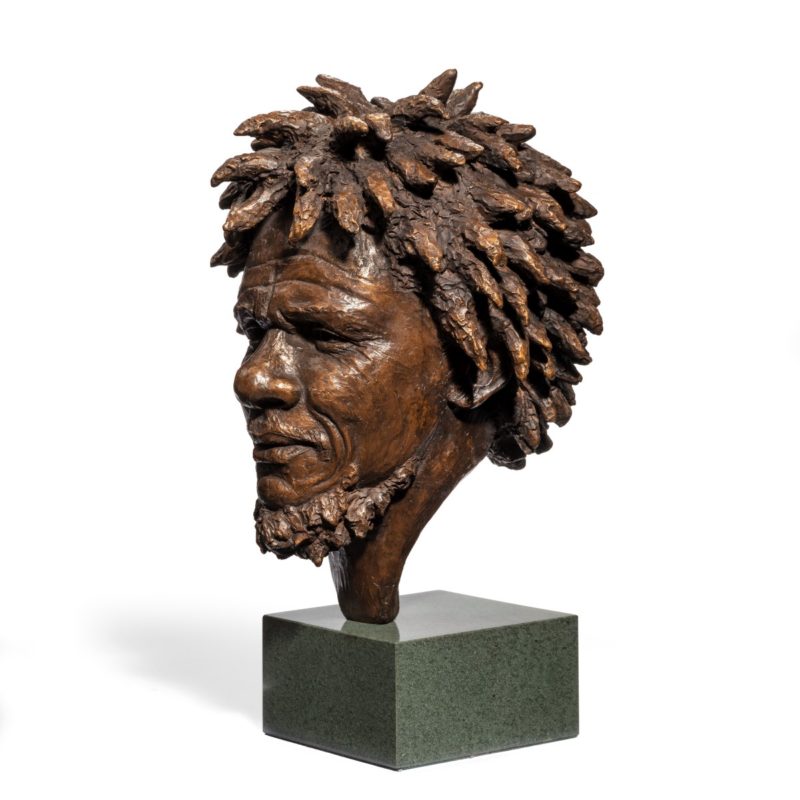 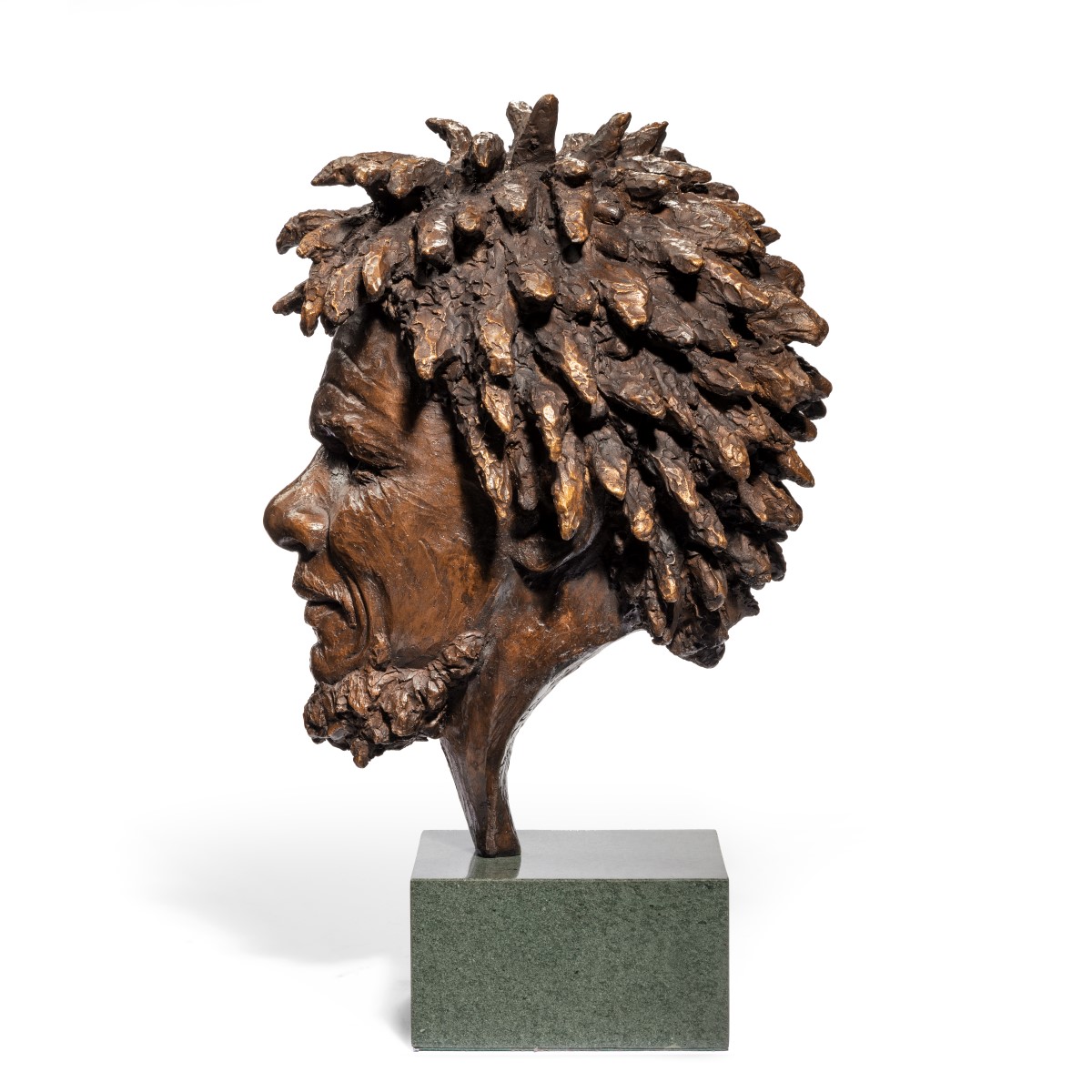 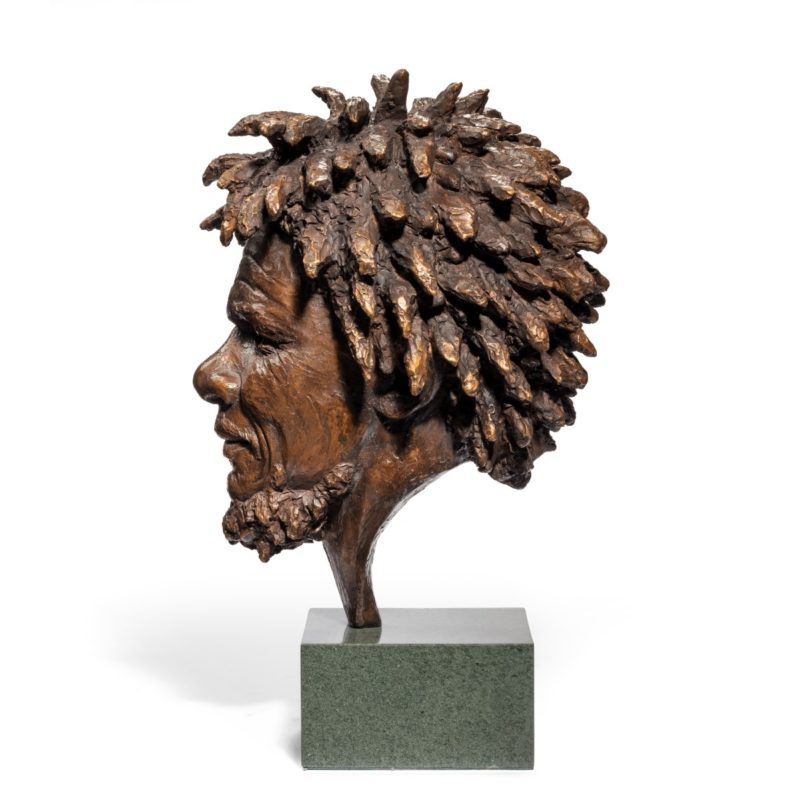 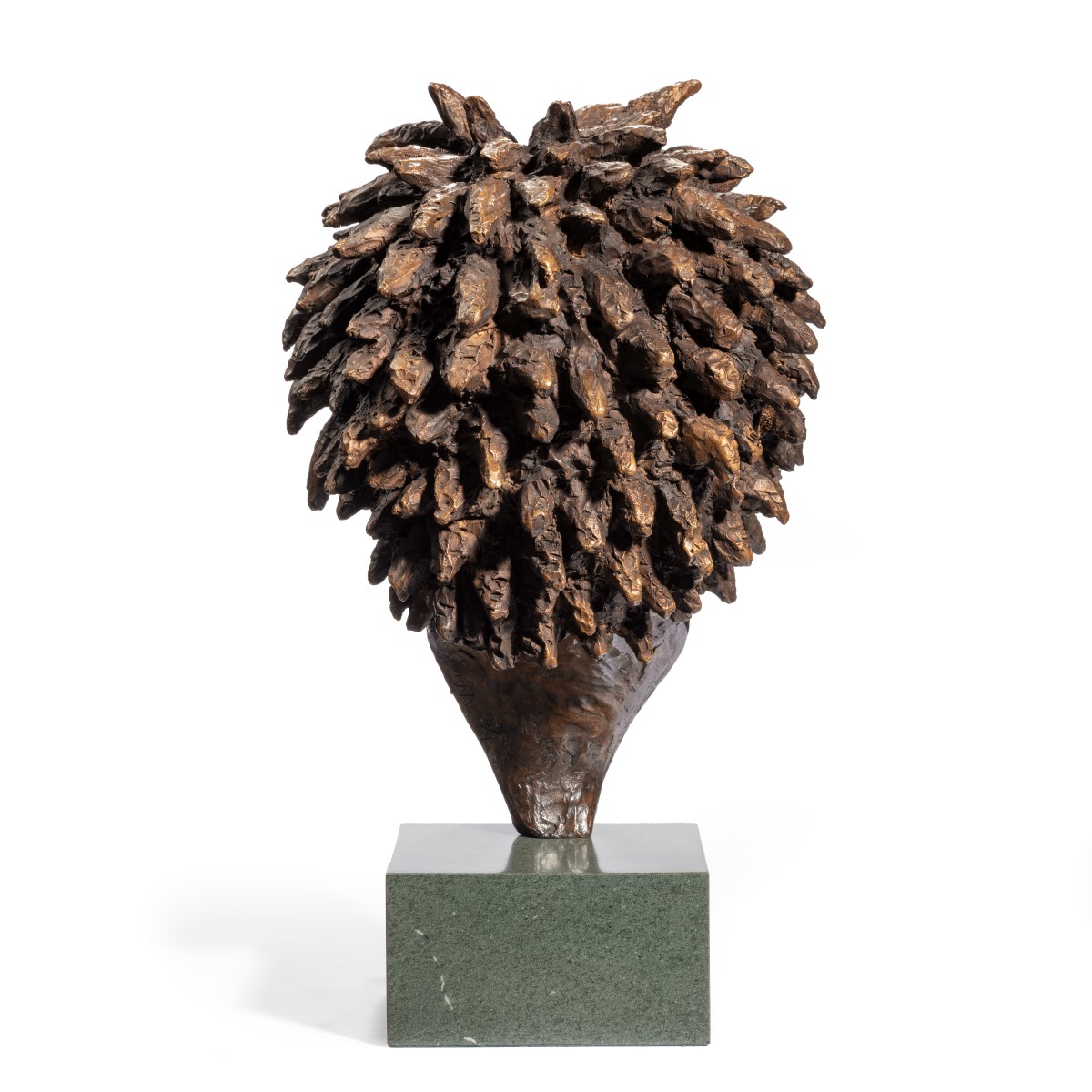 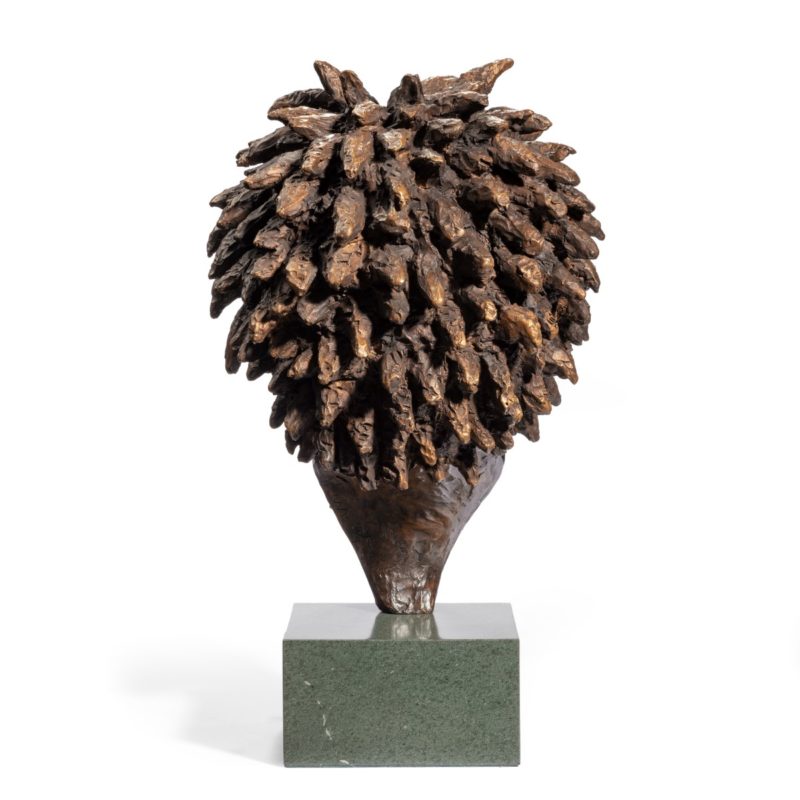 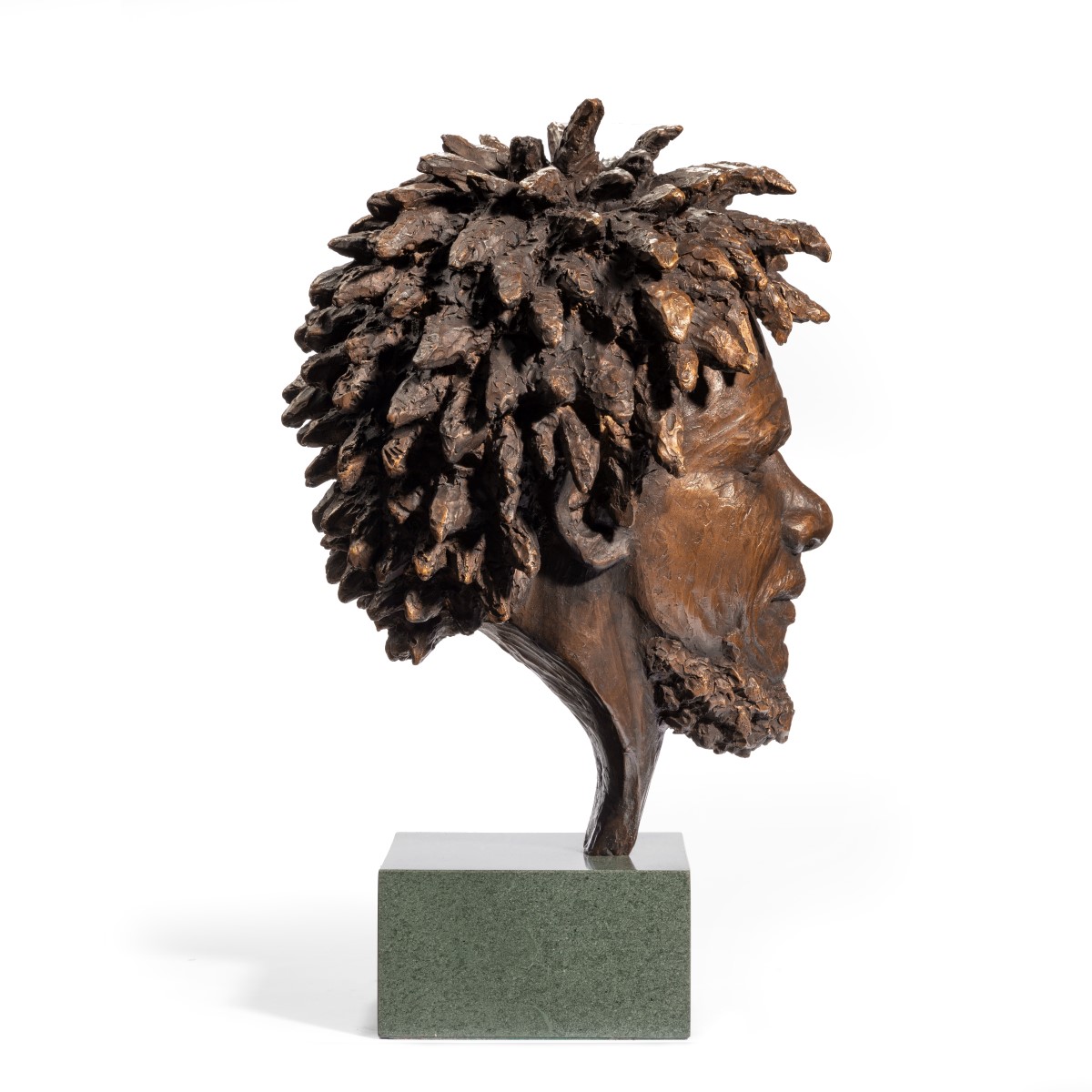 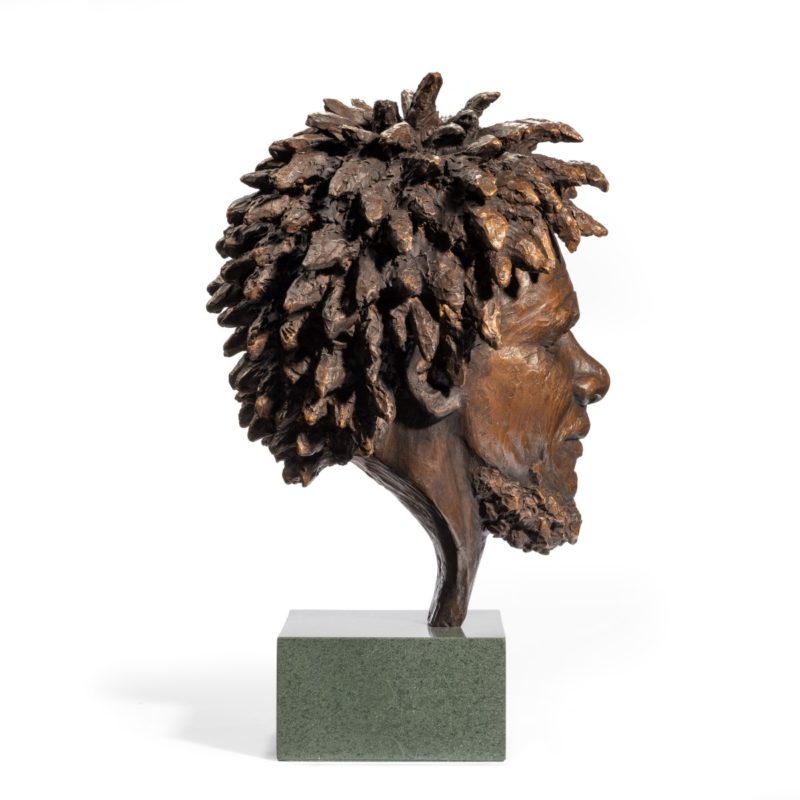 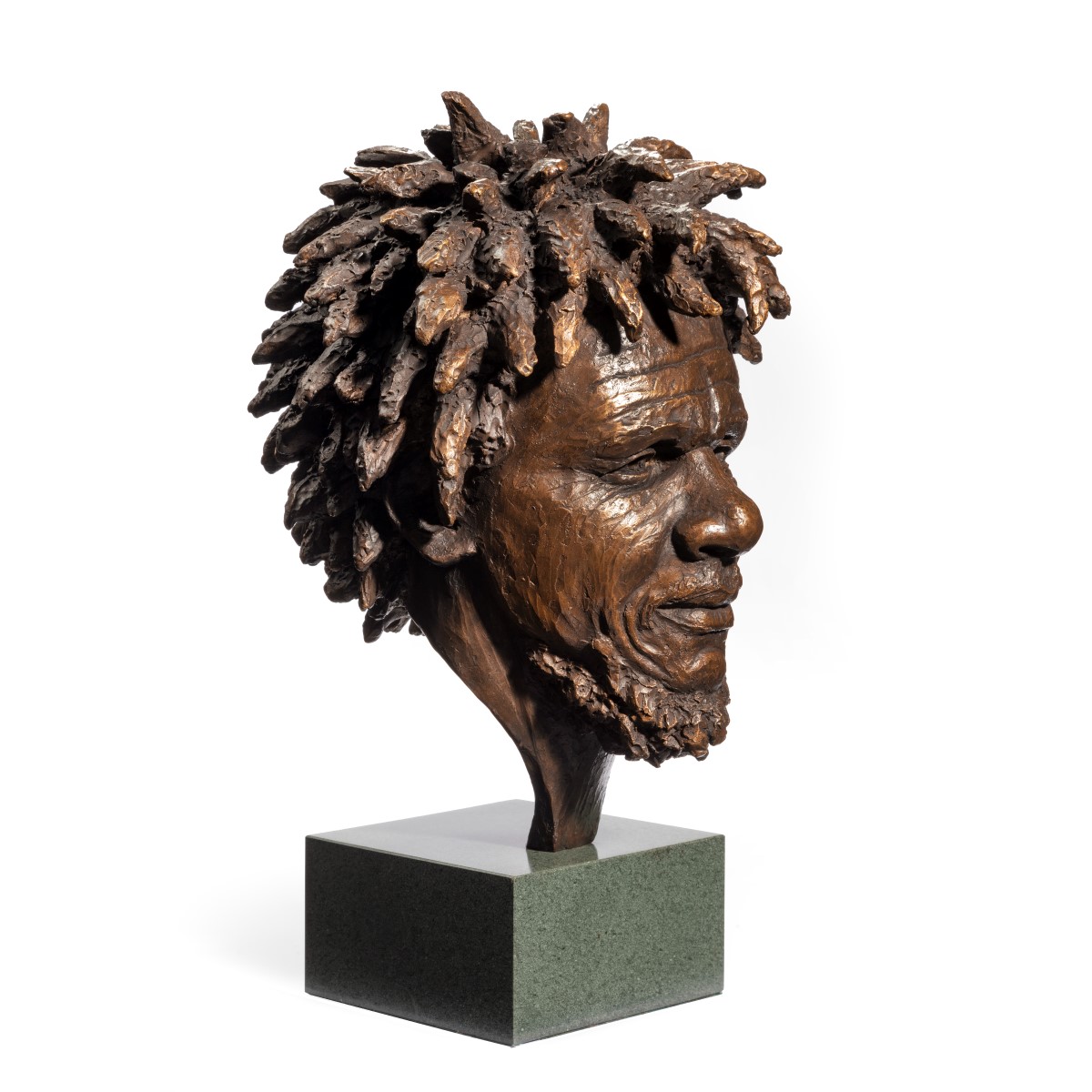 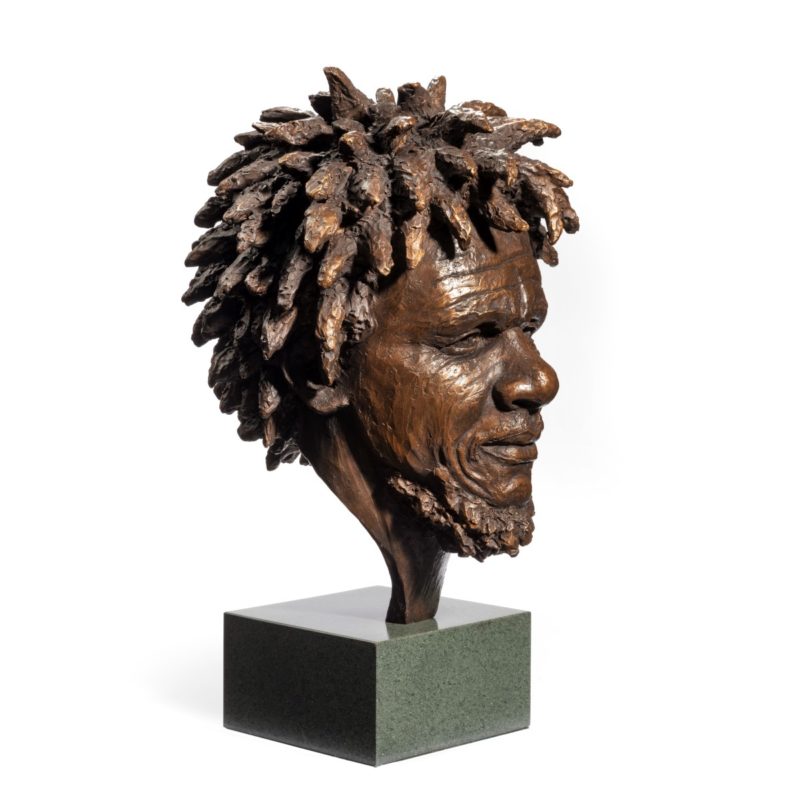 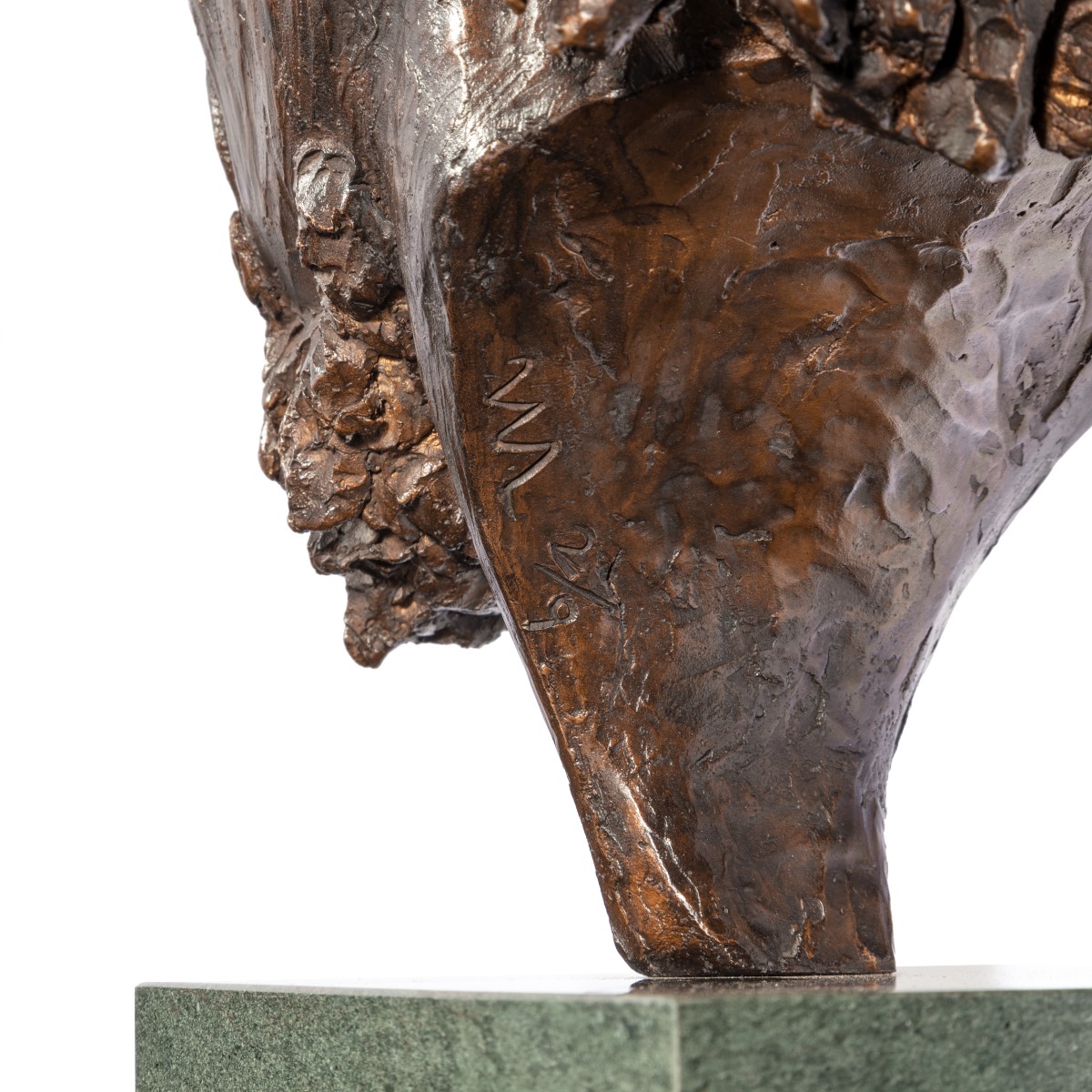 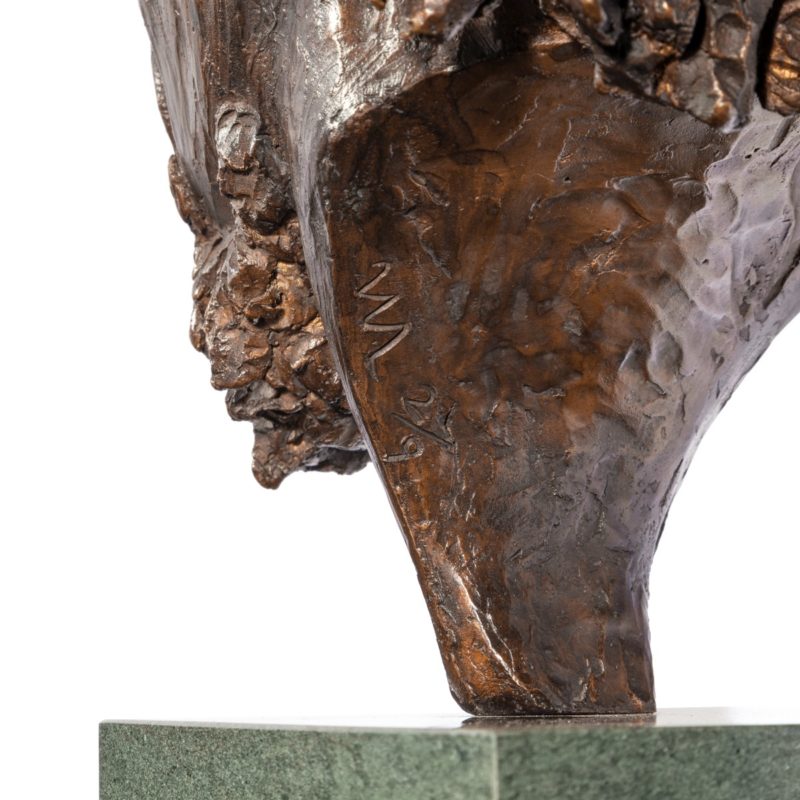 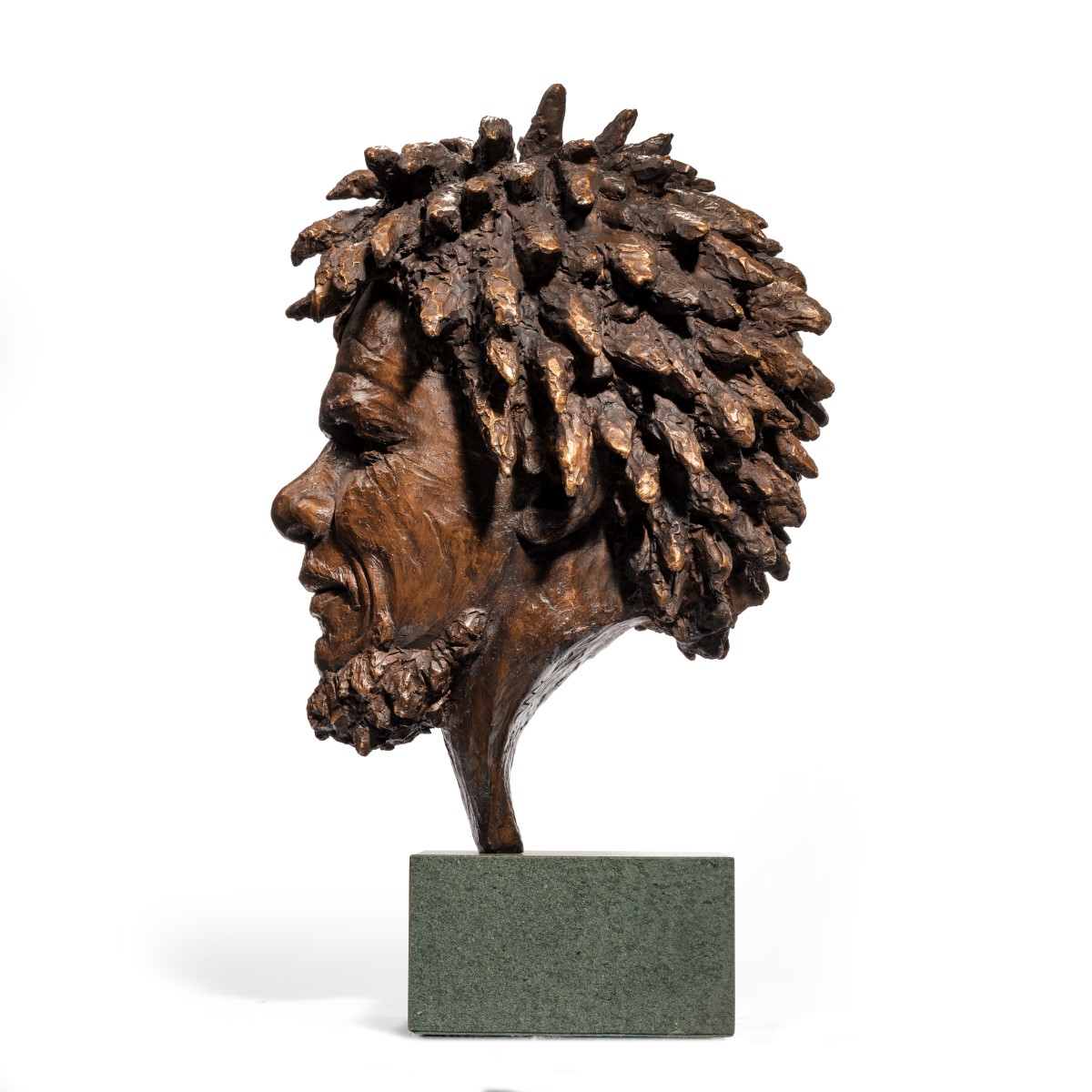 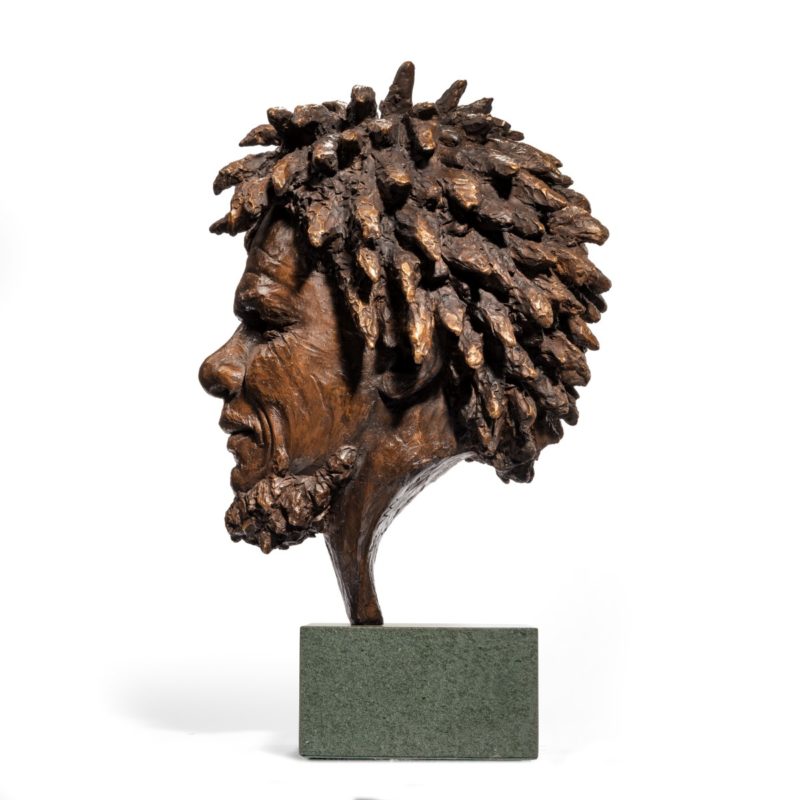 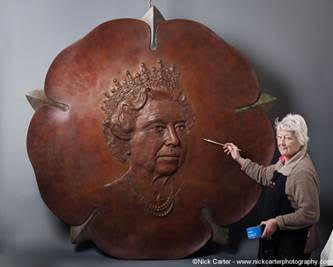 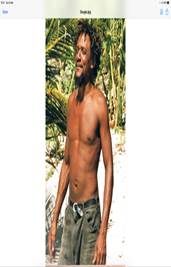 A fine bronze bust of ‘Dougie’ by Vivian Mallock

A fine bronze bust of ‘Dougie’ by Vivian Mallock depicting the head and smiling face of a Vincentian calypso singer with a dark patination becoming lighter at the end of his dreadlocks.  Signed, 2/9. English, 2000.

Vivian writes ‘The story of Dougie is fairly simple: In August 2000, we chartered a yacht in Grenada with some friends for a couple of weeks. We sailed north to St Vincent and, en route, dropped anchor overnight at Tobago Cays—a beautiful cluster of tiny uninhabited islands (pic attached) where we fished and snorkelled during the day.  A passing fisherman told us that the nearest island was in fact occupied by three locals who wanted to offer us barbequed iguana for supper.  This seemed too good to miss, so we took the dinghy ashore where Dougie welcomed us. He had heard us playing a guitar on board and promised to sing us some calypsos after supper. While we were eating our grilled iguana, we were told that Dougie’s main claim to fame was as the champion Calypso singer of the Grenadines.  Long after dark, we sat on driftwood on the beach and listened spellbound to his performance.  I was so taken by his character that I insisted on returning the following morning to take pictures of him so that I could sculpt him as soon as we returned to the UK.  Armed with an ‘instant camera’, I took shots of Dougie from all angles. We parted the best of friends and within a couple of weeks of our return home, Dougie’s bronze bust was there for all to see in her studio.

Vivien Mallock became an Associate of the Royal Society of British Sculptors in 1998.  Her largest work to date, the nine-foot memorial to the Royal Tank Regiment, unveiled by HM The Queen in 2000, stands in Whitehall Court and depicts the five-man crew of a Comet tank.  In 2013, her large bronze roundel bass relief portrait of Her Majesty The Queen was unveiled in the Great Hall in Winchester (see above).

She has completed numerous public sculptures of military figures, six of which constitute a unique series in Normandy, one of Major John Howard near Pegasus Bridge and in early 2014 her bust of Sir Winston Churchill was unveiled in the Pentagon as a gift from the British Government to the US Department of Defense.  Other recent subjects have varied from footballer Brian Clough to Sir Walter Raleigh.  She was the last artist for whom Queen Elizabeth The Queen Mother sat for a portrait.