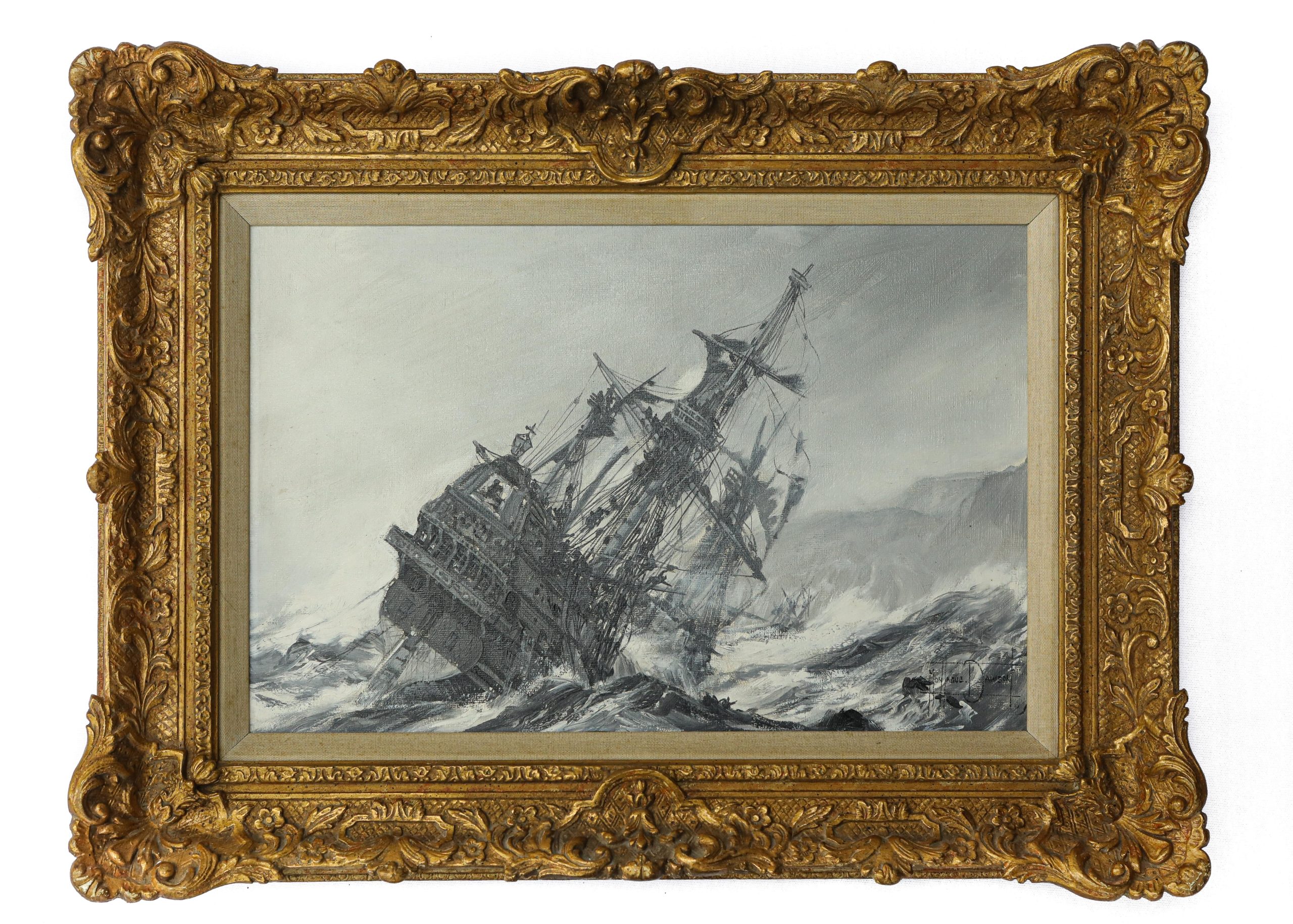 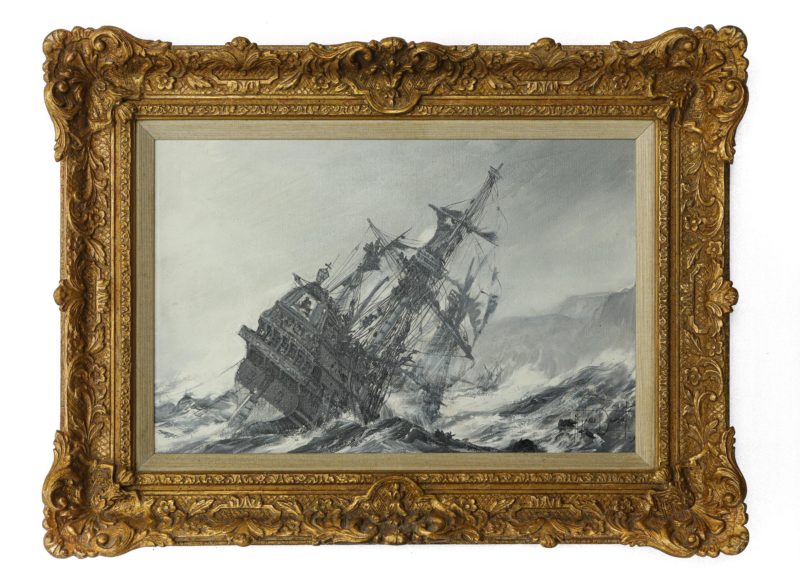 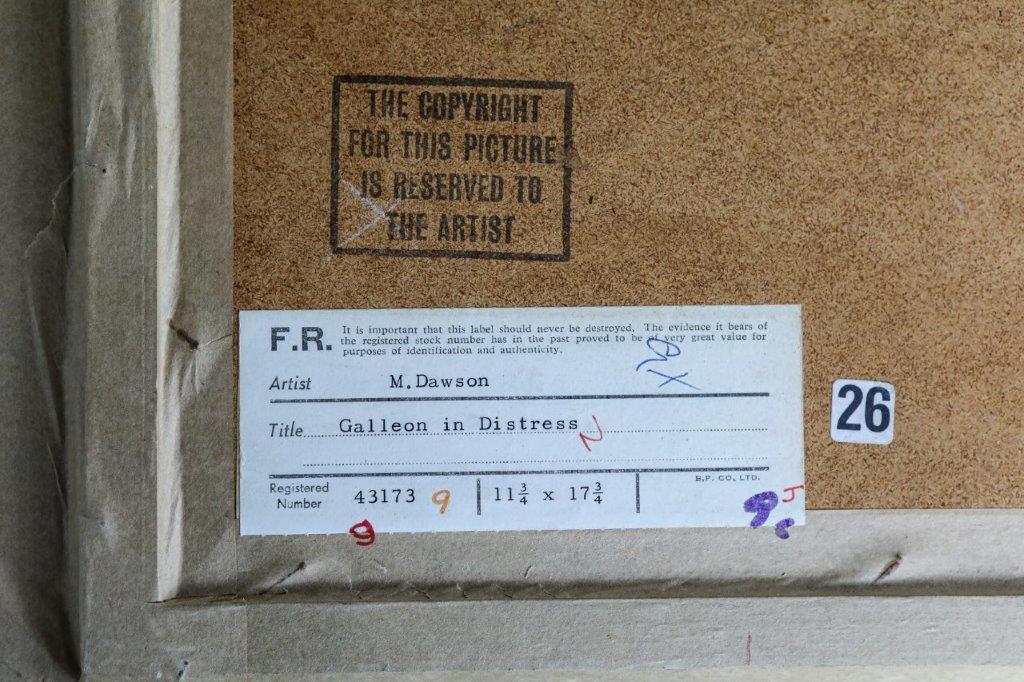 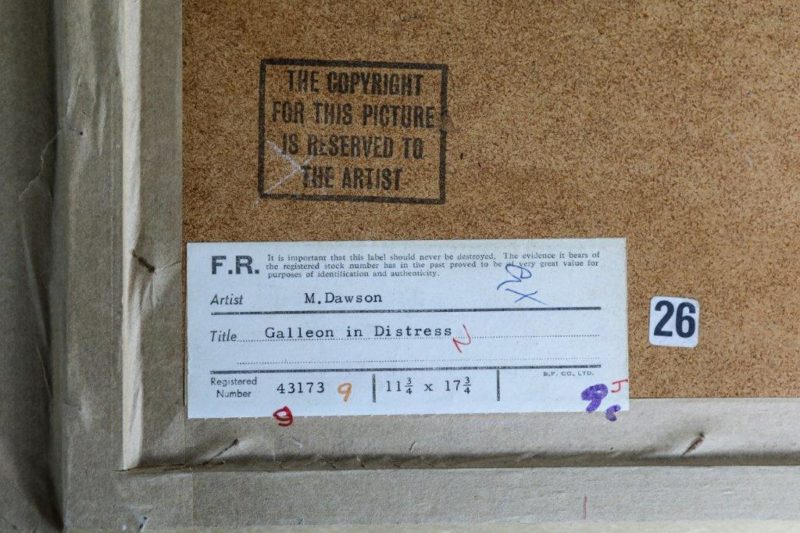 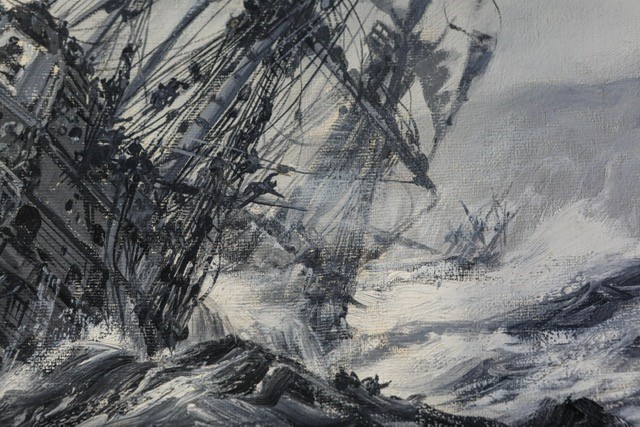 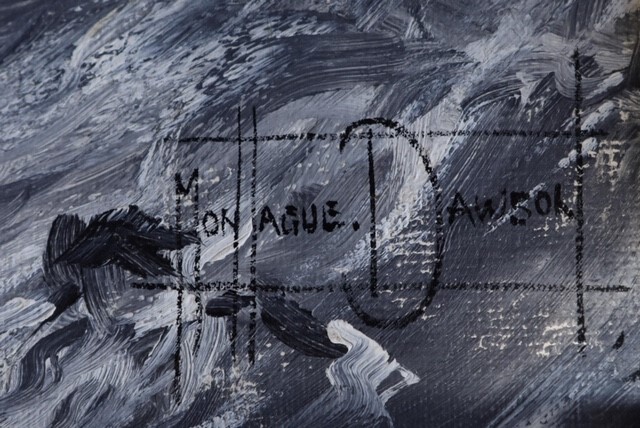 ‘A Galleon in Distress’ by Montague Dawson

‘A Galleon in Distress’ by Montague Dawson, a grisaille oil on board showing a galleon on port tack in grave danger of being wrecked on a rocky lee shore, with shredded sails and waves threatening to scupper her through her open gun ports, in the far distance another galleon is facing the same fate, close up details show figures clinging to in the rigging and floundering in the water, the reverse with a paper I.D. label. Signed ‘Montague Dawson’, in an ornate gilt frame. English, circa 1950.

Footnote:  Alan Russett, author and naval historian writes ‘Being Montague Dawson, the drawing is very likely to be a totally accurate representation of a vessel either from an earlier model or based on a known design and therefore authentic.  Considering the principal features, I am prepared to hazard the view that the vessel is Spanish from the end of the 16th. century or the first half of the 17th, which leads of course to the Armada of 1588. The scene is of a storm, a shipwreck on a high rocky shore and another vessel in similar state in the distance. After its defeat in the Channel and failure to land, the Armada sailed around the British Isles endeavouring to return to Spain. Many ships were wrecked in storms on the west coast of Ireland and it might not, therefore, be too fanciful to see this work as a representation of such a disaster. I emphasise that this is entirely hypothetical in the absence of hard evidence.

The use of grisaille, and its apparent size, suggest that this work was intended for publication in ‘The Sphere’, ‘Tatler’ or ‘Illustrated London News’, to which Dawson contributed regularly, as their illustrations used this medium.’

Montague Dawson RMSA, FRSA (1890–1973) was the son of a keen yachtsman and the grandson of the marine painter Henry Dawson (1811–1878. He served in the Dazzle Painting Section at Leith and in 1924 in WWI and was the official artist for an Expedition to the South Seas by the steam yacht St.George. He was present at the final surrender of the German High Seas Fleet and many of his illustrations depicting the event were published in the Sphere. After the war, Dawson established himself as a professional marine artist, concentrating on historical subjects and portraits of deep-water sailing ships often in stiff breeze or on high seas. During WWII he was once again employed as a war artist and again worked for The Sphere. He exhibited regularly at the Royal Society of Marine Artists, of which he became a member, from 1946 to 1964, and occasionally at the Royal Academy between 1917 and 1936. By the 1930s he was considered one of the greatest living marine artists, whose patrons included two American Presidents, Dwight D Eisenhower and Lyndon B Johnson, as well as the British Royal Family.