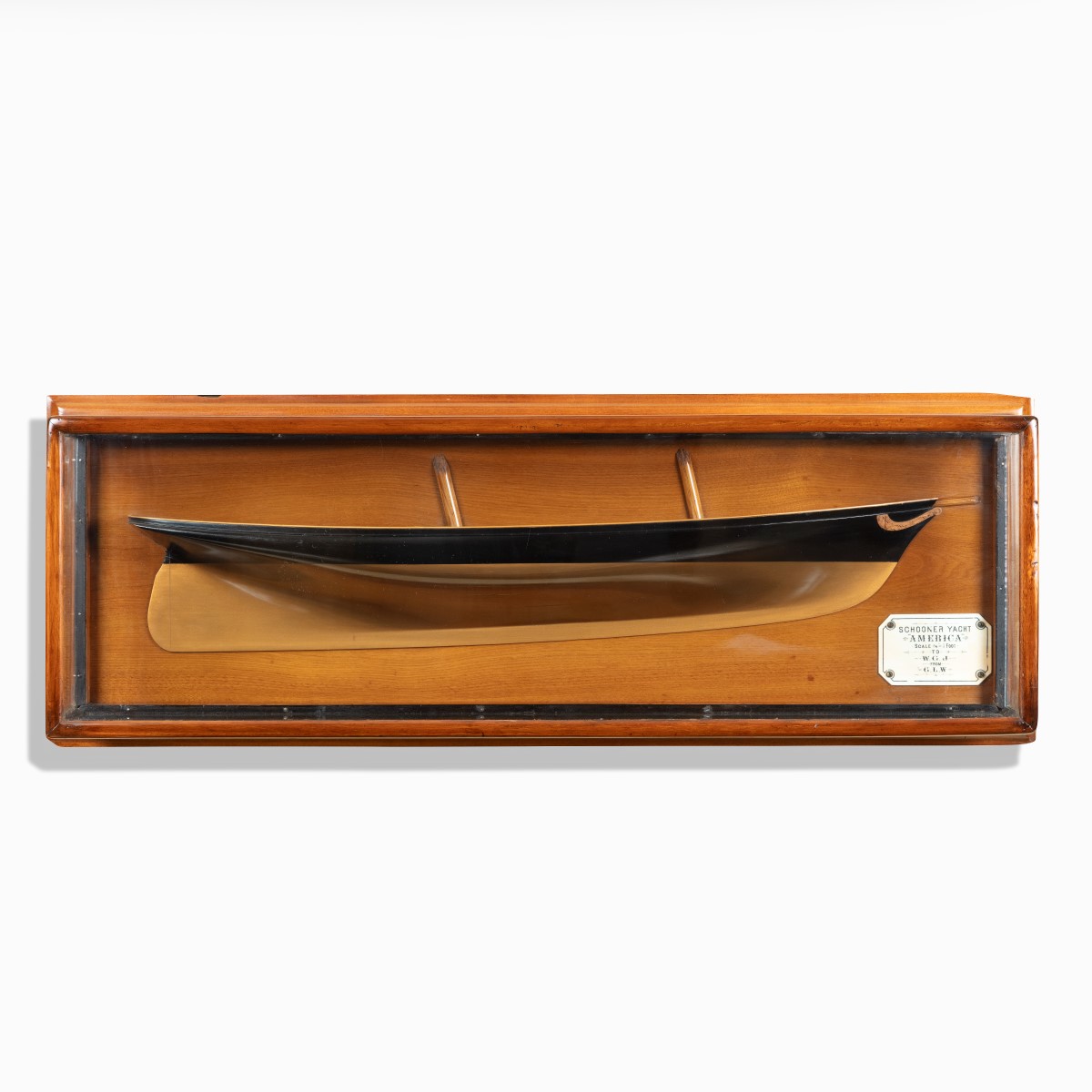 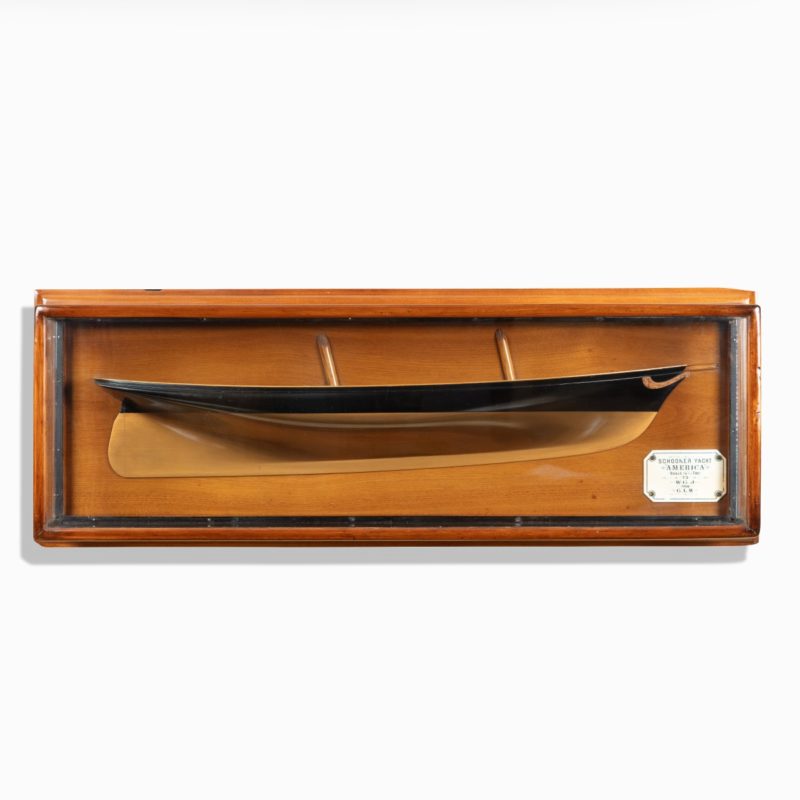 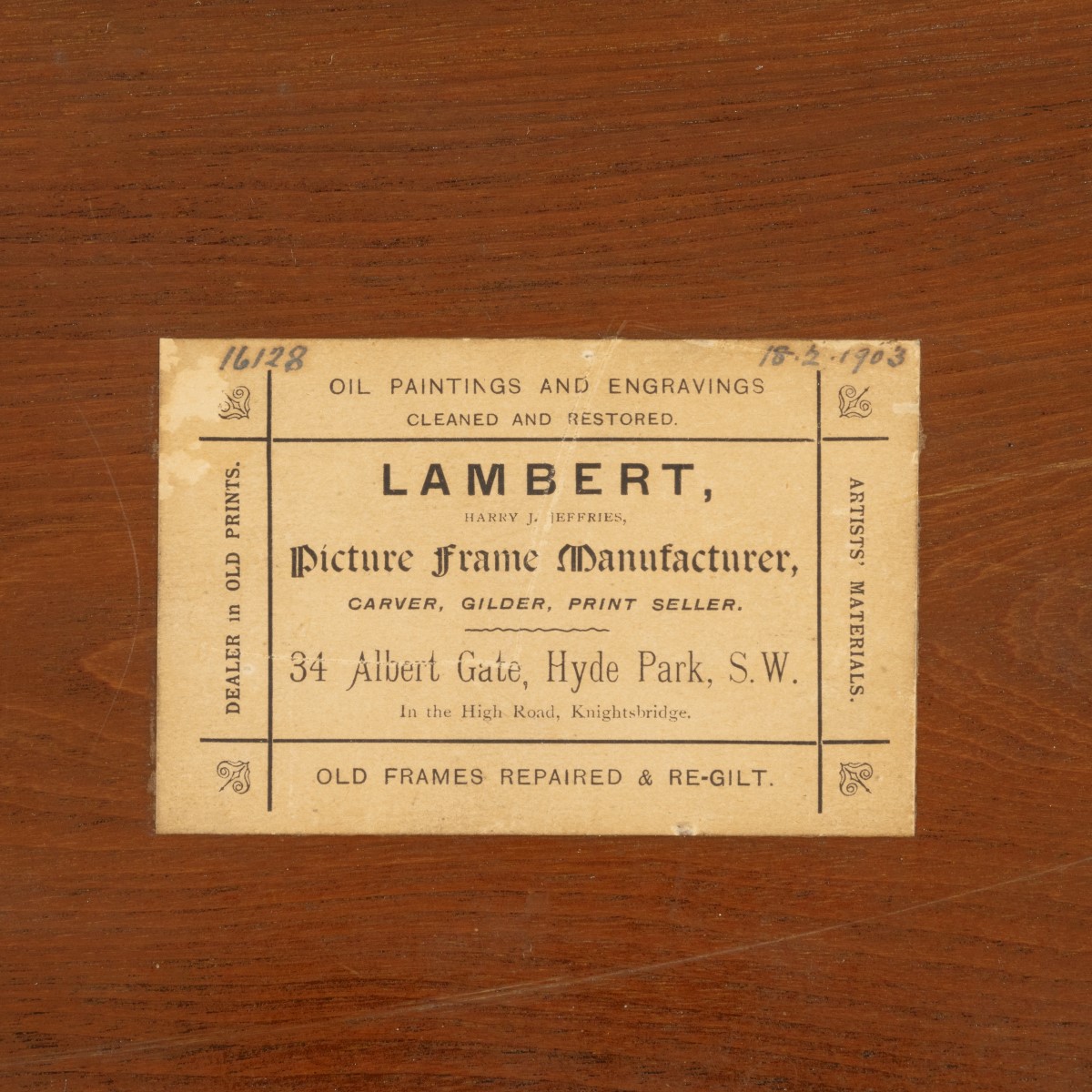 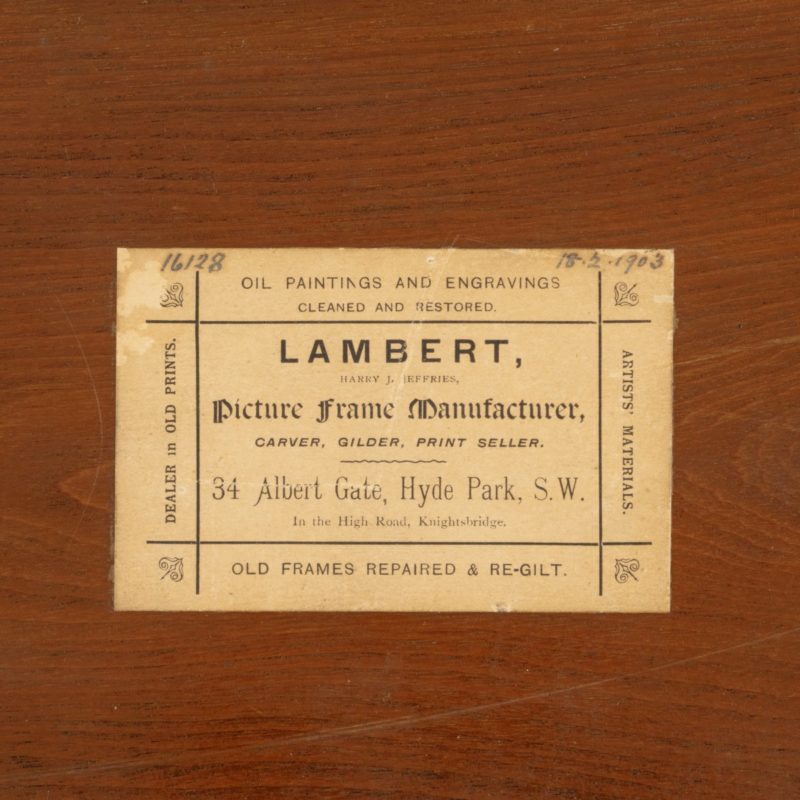 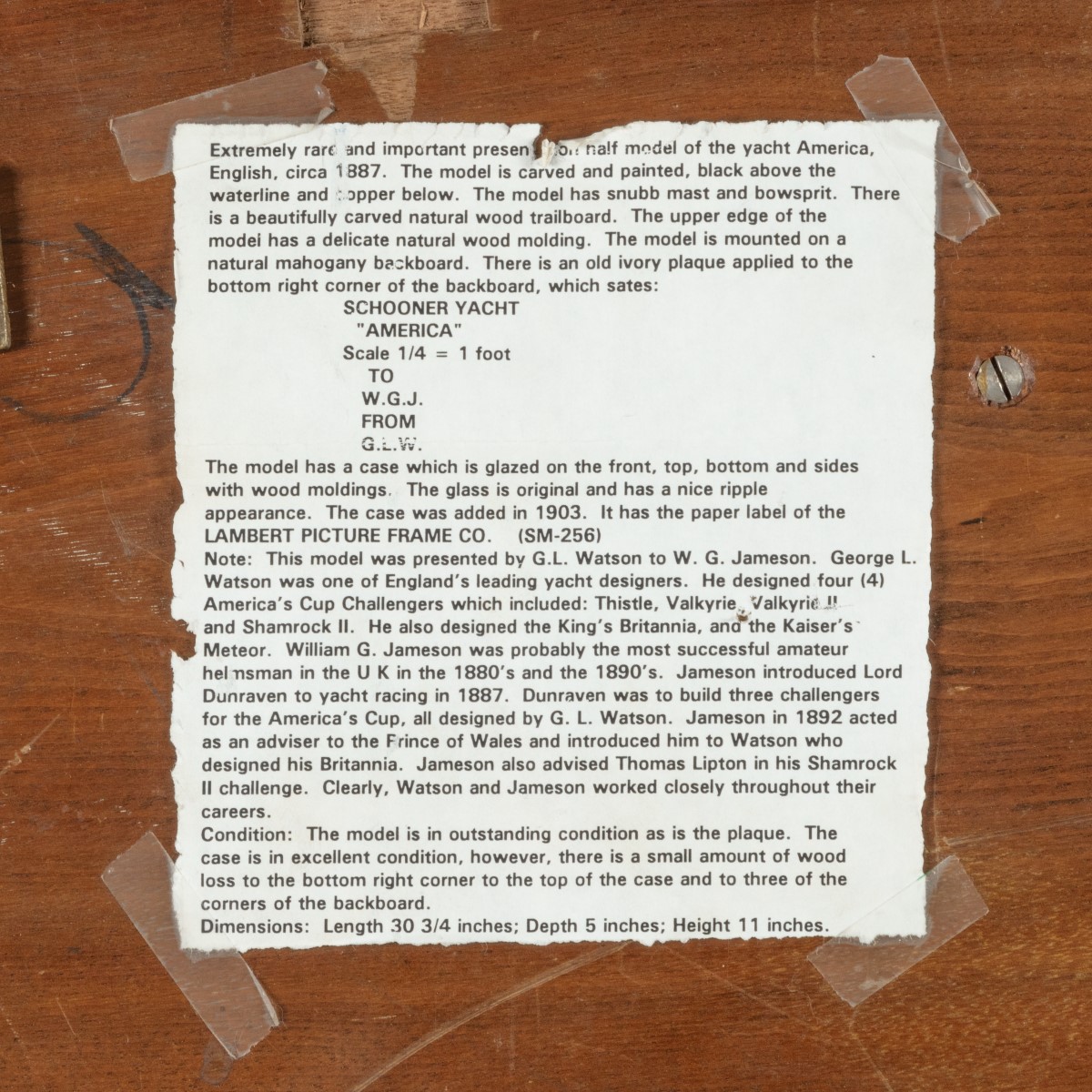 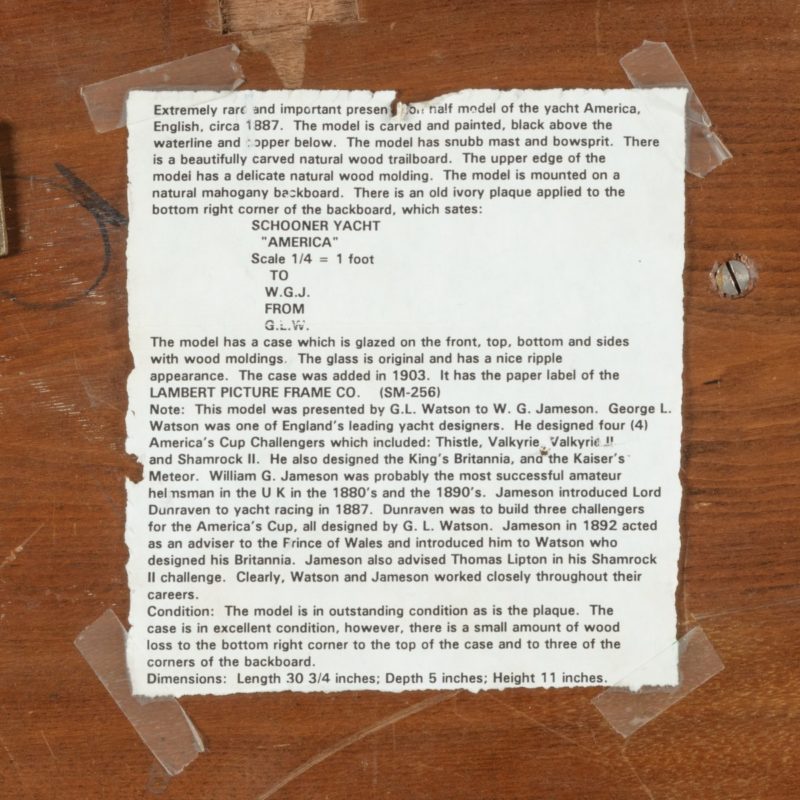 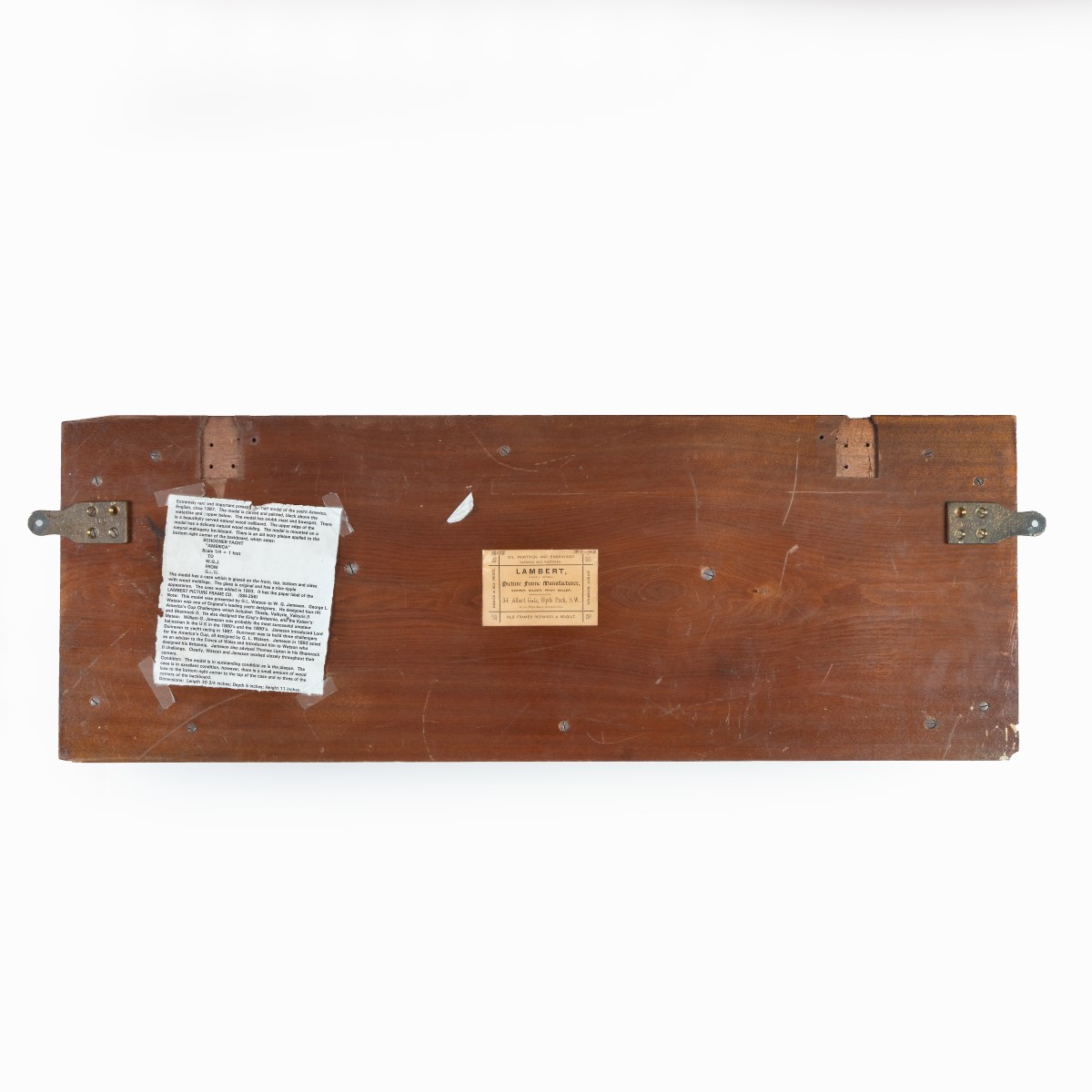 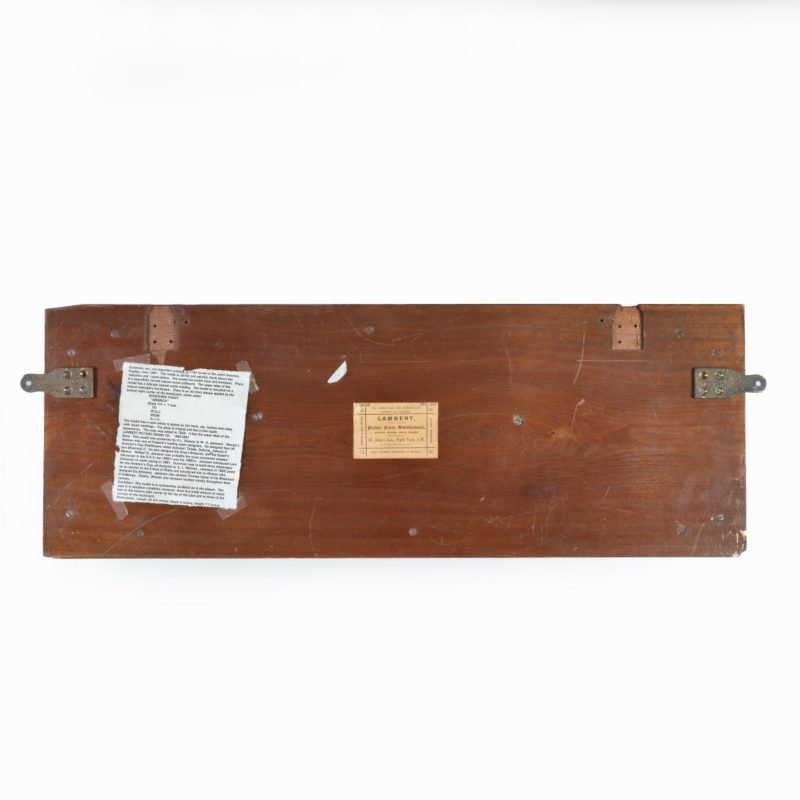 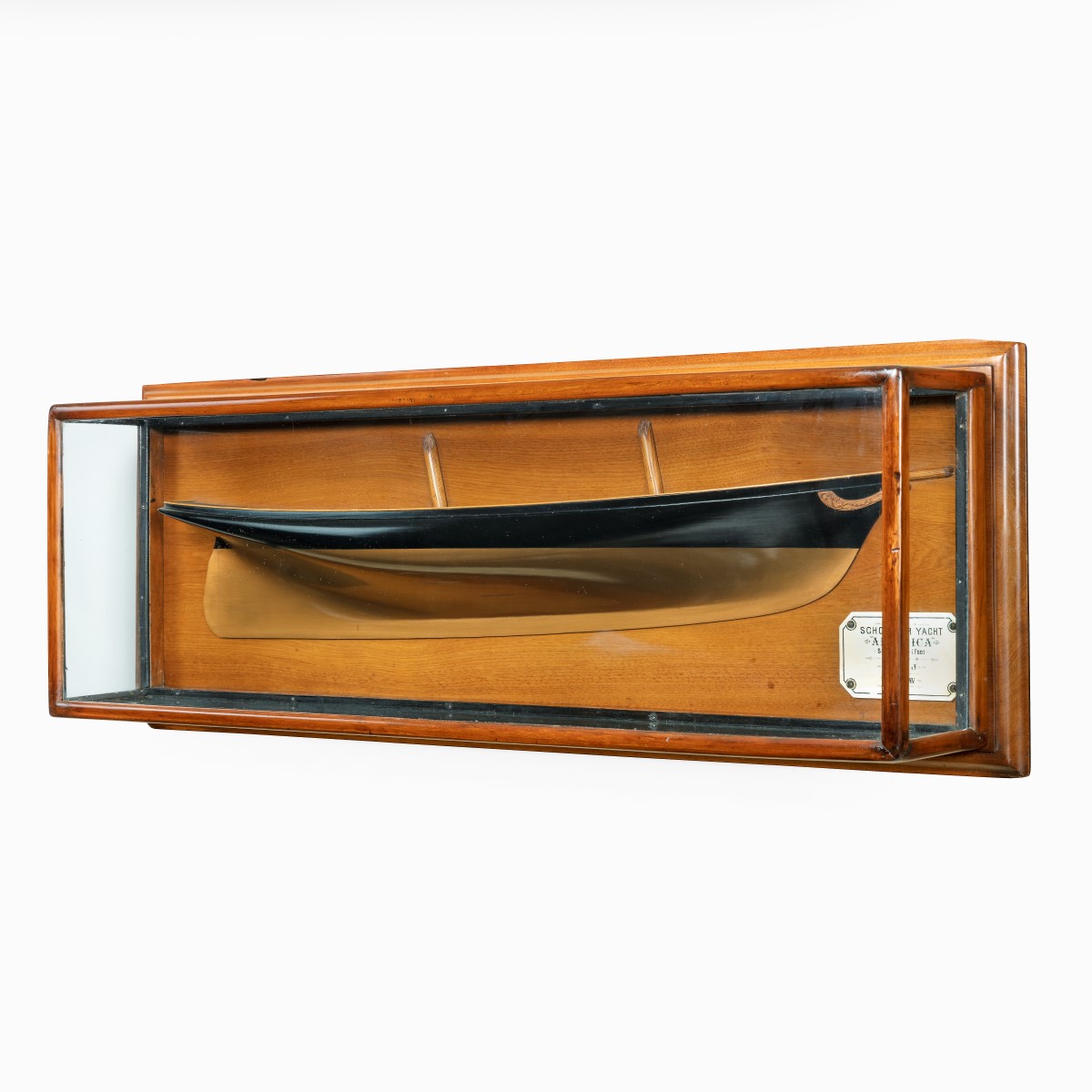 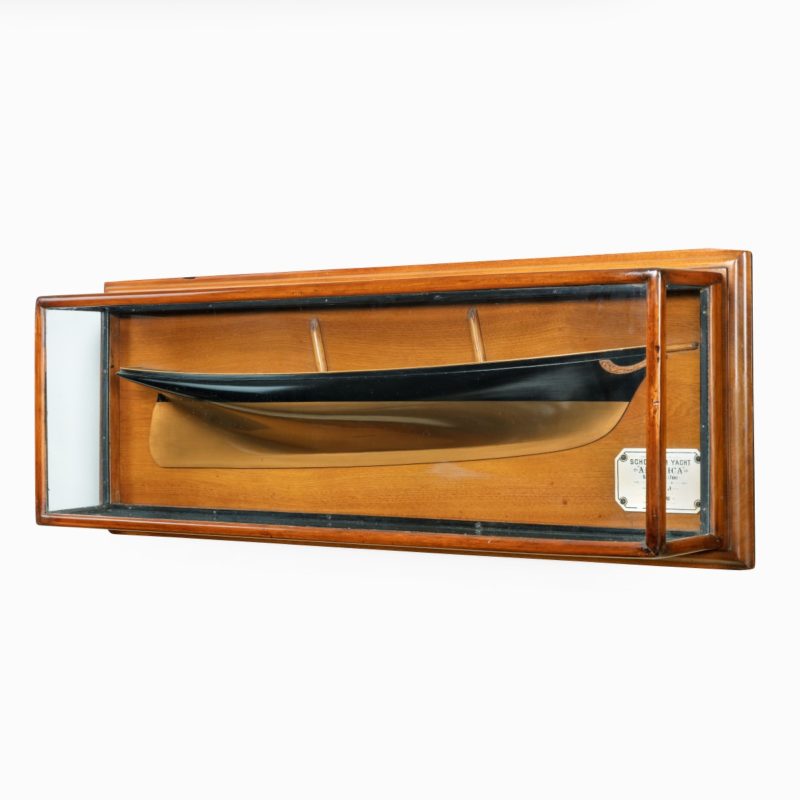 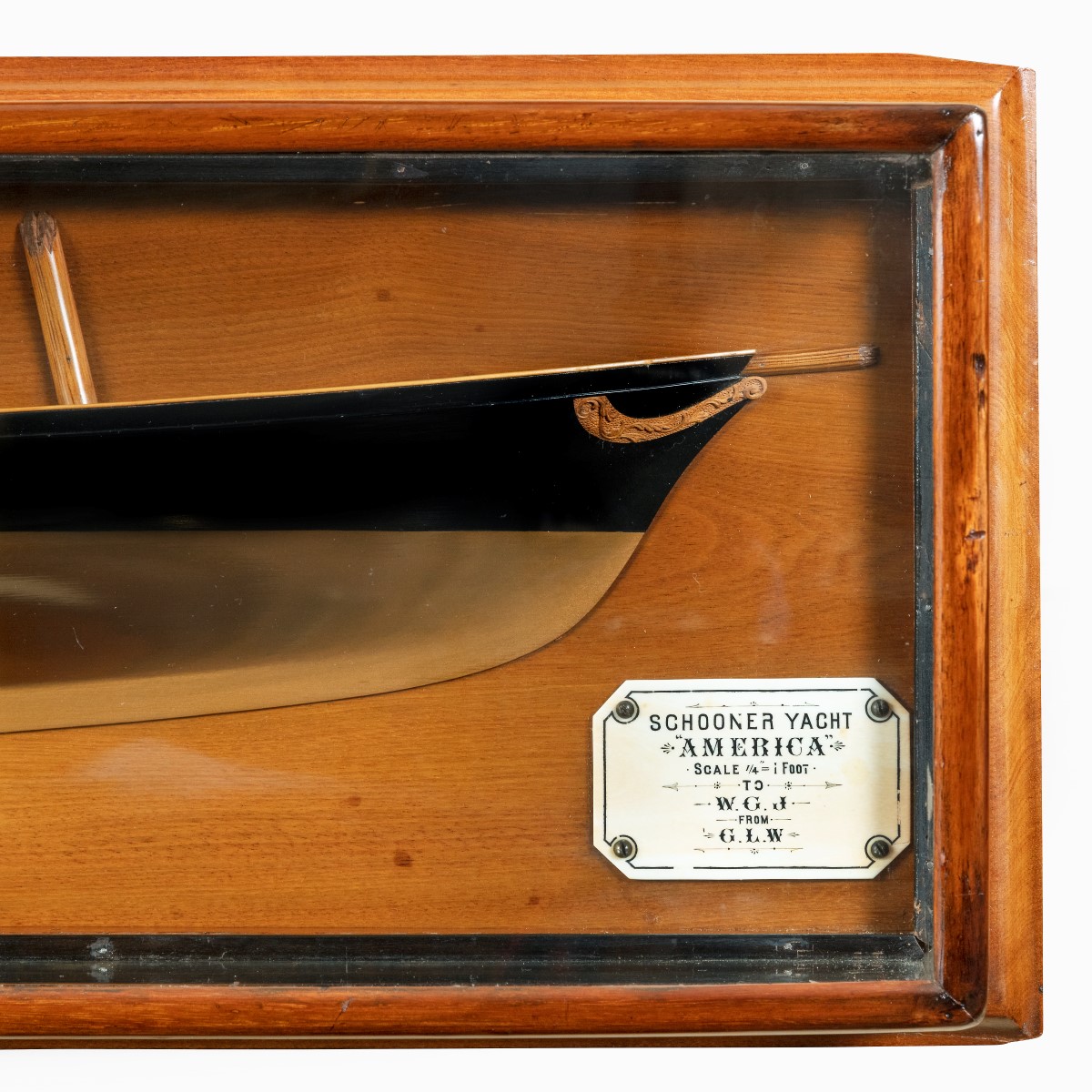 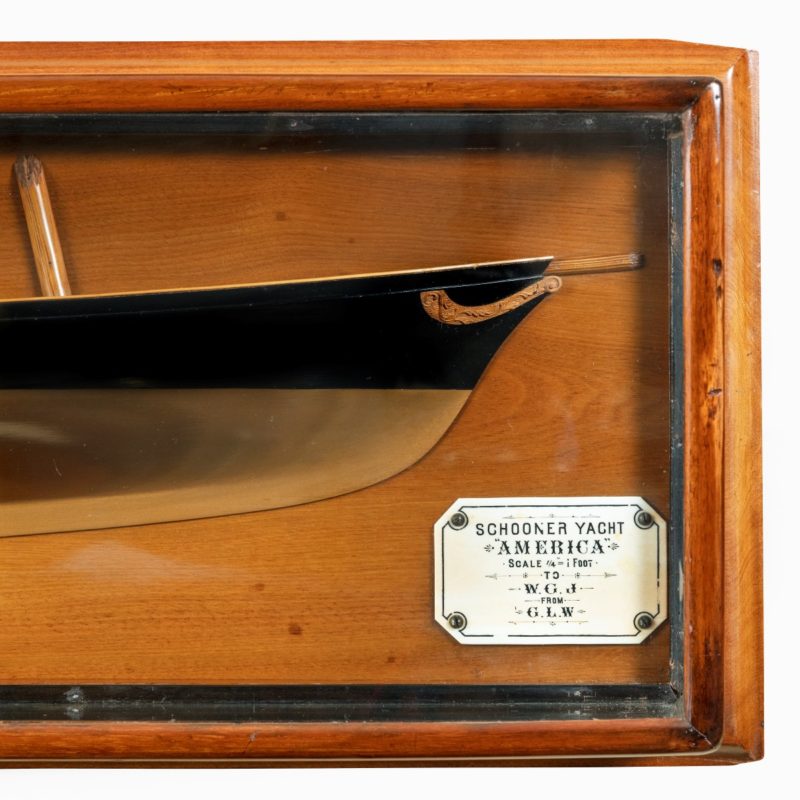 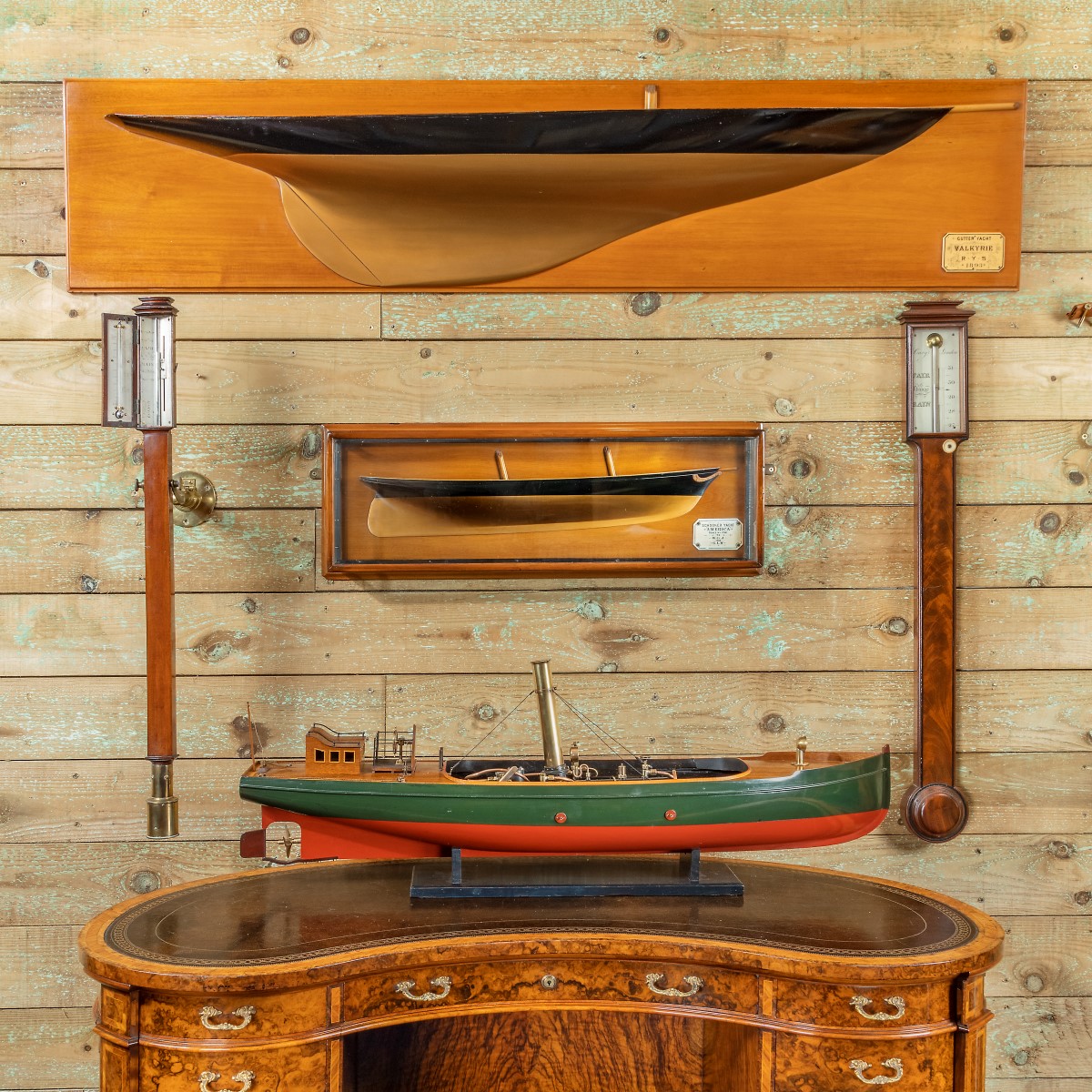 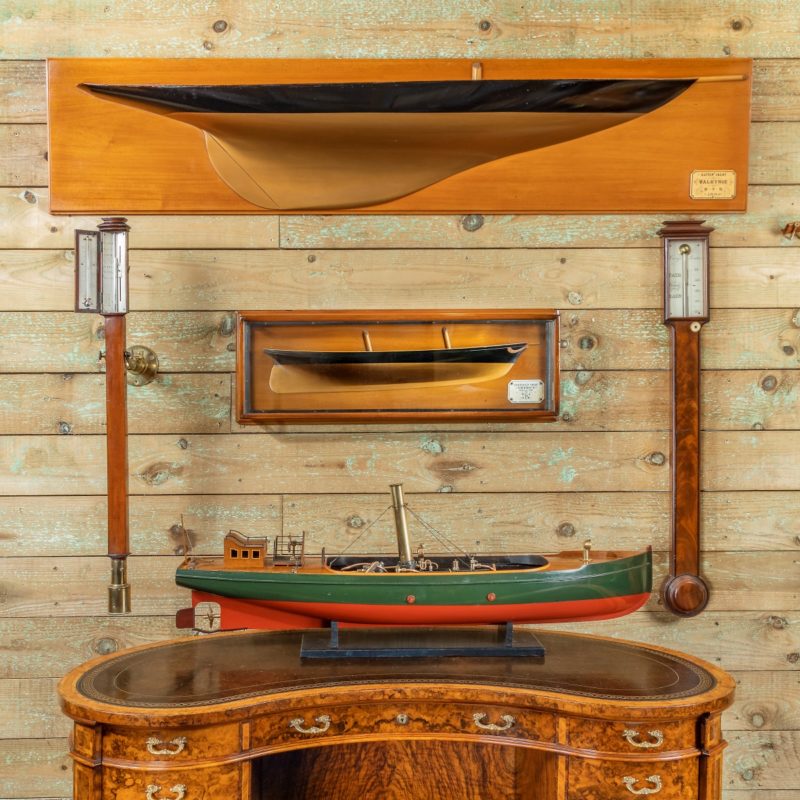 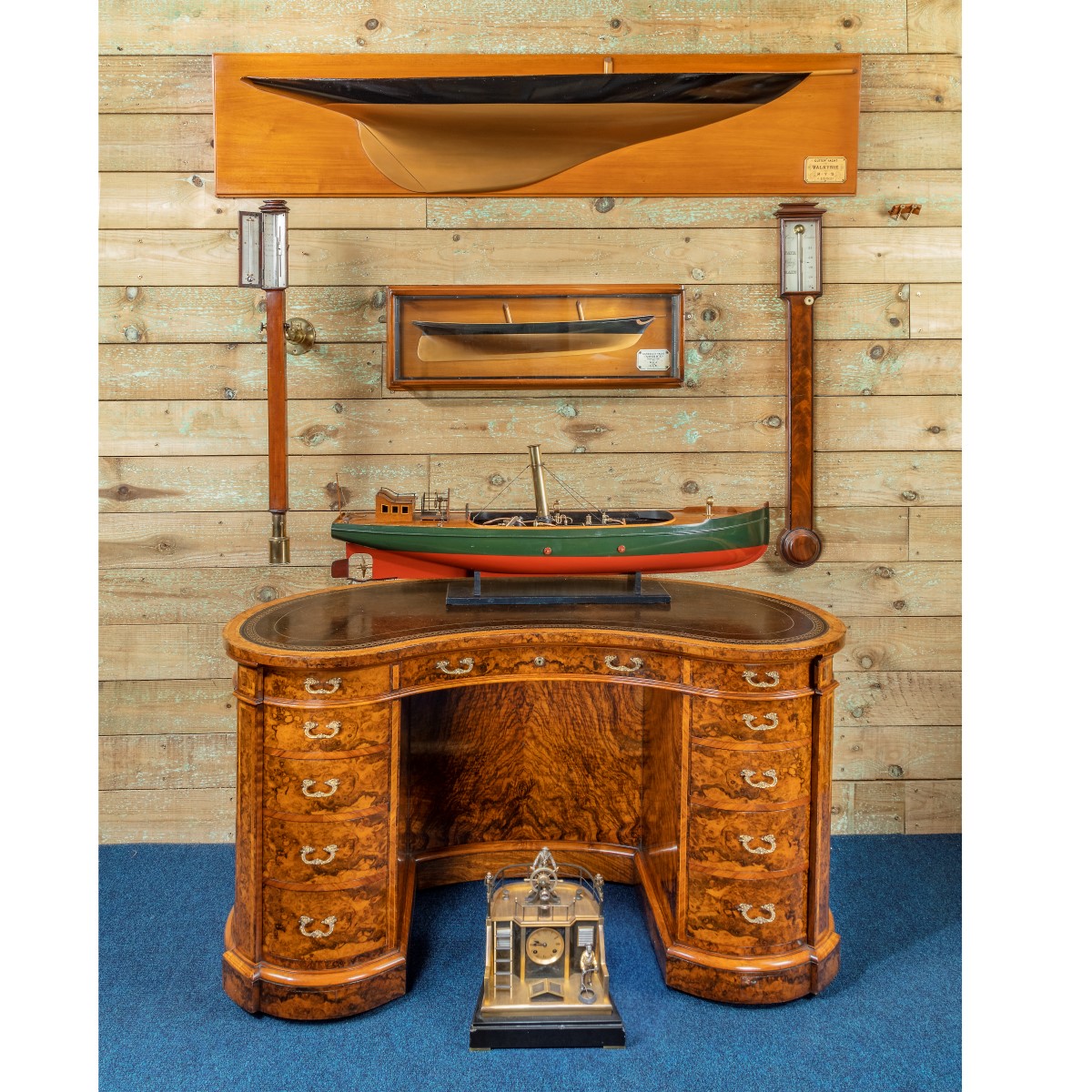 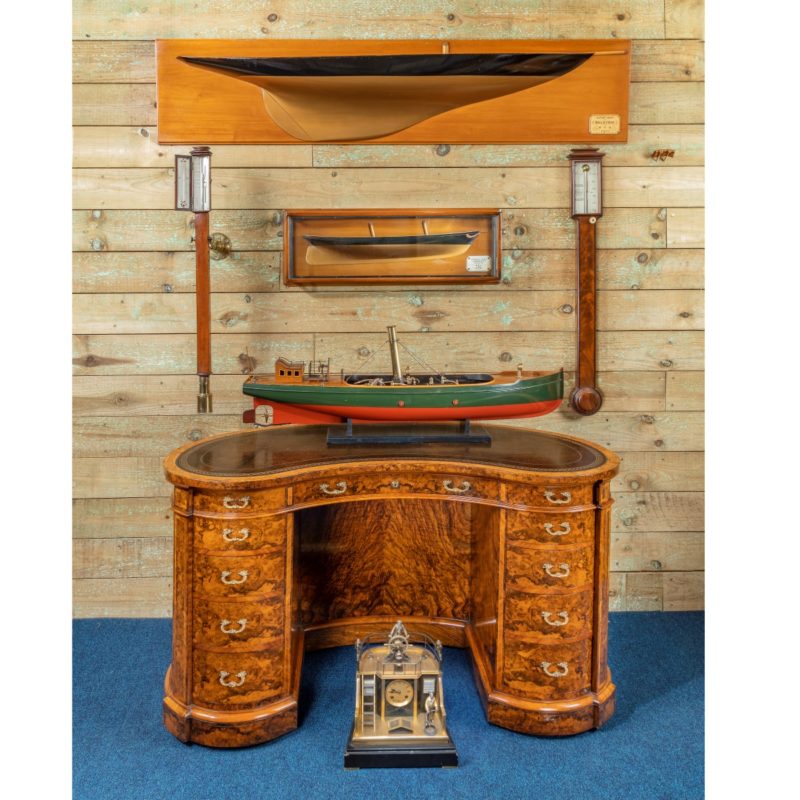 This cased presentation half hull model is of the first winner of the America’s Cup, the schooner America.  The copper coloured bottom is painted with black topsides and has a finely carved garland around the bow.  There are two stump masts, a caprail and bowsprit.  It is set on a mahogany backboard with a Bakelite name plaque engraved ‘Schooner Yacht ‘America’ Scale ¼ = 1 foot to W.G.J. from G.L.W’.  A label identifies the case maker as ‘Lambert Picture Frame Manufacturer, 34 Albert Gate, Hyde Park, S.W.’ and another describes the model, including the fact that the case was added in 1903.  It then explains the initials W.G.J. and G.L.W.  ‘This model was presented by G.L.Watson to W.G.Jameson.  George L.Watson was one of England’s leading yacht designers.  He designed four America’s Cup Challengers which included: Thistle, Valkyrie, Valkyrie II and Shamrock II.  He also designed the King’s Britannia, and the Kaiser’s Meteor.  William G.Jameson was probably the most successful amateur helmsman in the U K in the 1880’s and the 1890’s.  Jameson introduced Lord Dunraven to yacht racing in 1887.  Dunraven was to build three challengers for the America’s Cup, all designed by G.L.Watson.  Jameson in 1892 acted as an adviser to the Prince of Wales and introduced him to Watson who designed his Britannia.  Jameson also advised Thomas Lipton in his Shamrock II challenge.  Clearly, Watson and Jameson worked closely throughout their careers.  Scottish, 1887.

Probably the most famous racing yacht ever built, and the first winner of the America’s Cup, this schooner, designed by James and George Steers, was built by a syndicate of New York Yacht Club members to sail to England.  The purpose of this visit was twofold: to show off U.S. shipbuilding skills and make money through competing in regattas.  Only launched on 3rd May 1851, she had crossed the Atlantic and won the 53-mile race around the Isle of Wight by 22nd August that same year.  America was captained by Richard Brown, who was a skilled member of the Sandy Hook Pilots group, renowned worldwide for their expertise and speed in manoeuvering schooner-rigged pilot boats.  These vessels and crews had to be fast, for harbour pilots competed with each other for business.

Ten days after she won the regatta she was sold to British owners, firstly, John de Blaquiere, 4th Baron de Blaquiere and then Henry Montagu Upton, 2nd Viscount Templetown, who renamed her Camilla, and finally Henry Sotheby Pitcher.  Camilla was returned to the United States by Henry Edward Decie in 1860, and used in the American Civil War until she was finally renamed America and, armed with cannon, served in the United States Navy.  On August 8, 1870, the Navy entered her in the America’s Cup race at New York Harbor, where she finished fourth.  For the next 50 years she changed hands numerous times in a repeated cycle of successful competition followed by neglect, probably due the phenomenal costs of big yacht racing.  In 1921 she was donated to the U.S. Naval Academy in Annapolis but again fell into disrepair until finally the shed which housed her collapsed during a heavy snowstorm 1942 and the remains of the shed and ship were scrapped and burned in 1945.  America was one of only three ships in commission in the U.S. Navy in both the Civil War and World War II, joined by the USS Constitution and USS Constellation. 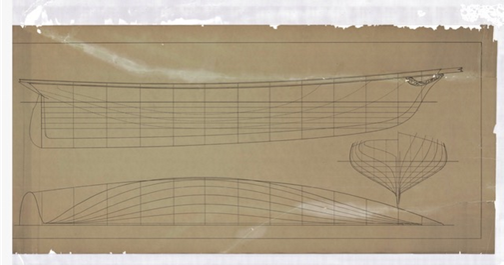 We are indebted to Dr William Collier, Managing Director of G. L. Watson & Co. Ltd, whose research has unearthed both this drawing of plans of America’s hull and Watson’s own notebook on Britannia, or design No. 270, as she was then.  The first entry reads ‘Racing Cutter 87ft [waterline length] per W G Jamieson’ followed by ‘Note of costs as given to the Prince of Wales’, the total was £8,300.  The drawing is one of a series that were made for models and there is at least one other of America made at the same time and given as a thank you present in connection with the Valkyrie IIchallenge.