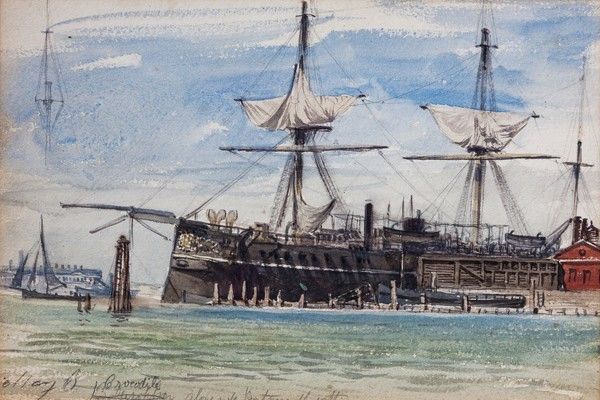 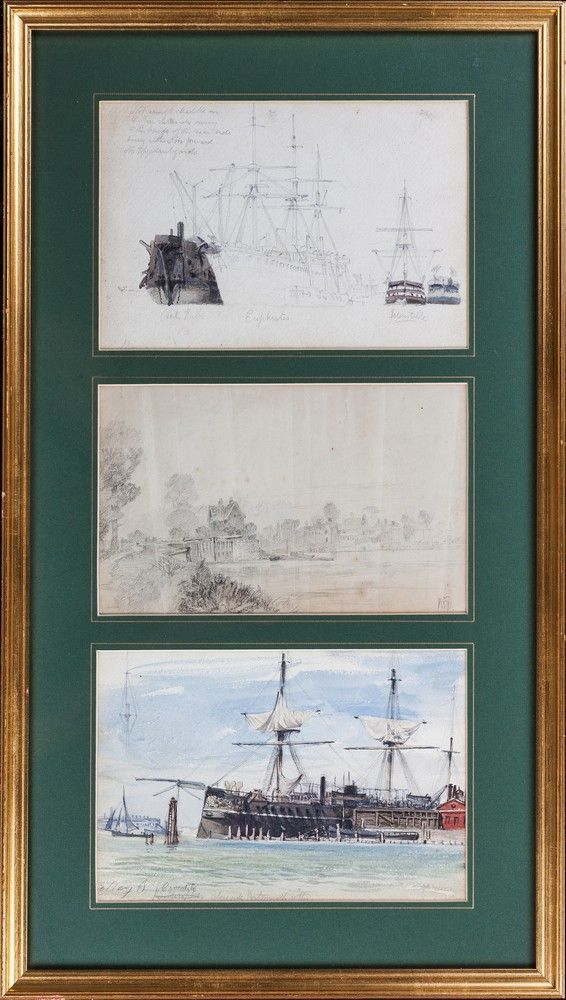 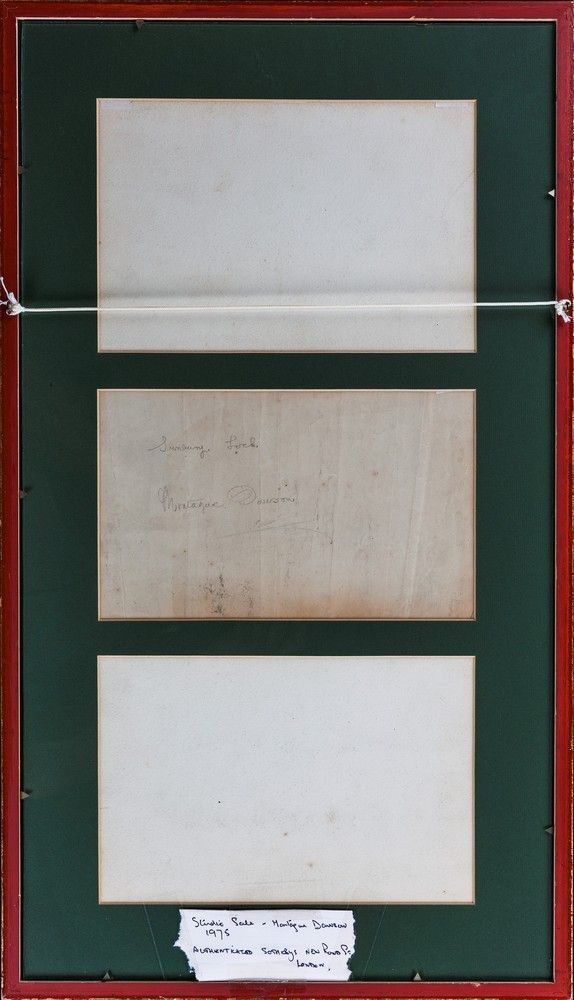 A set of three pen, ink and water colour sketches by Montague Dawson

A set of three pen, ink and water colour sketches set in a single farme, HMS Euphrates, HMS Irresistible and a hulk, a view of Sunbury Lock and a Dreadnought alongside at Portsmouth with notations by Montague Dawson RA.

Montague Dawson born in West London, in Chiswick in 1895, He was the grandson of Victorian landscape painter Henry Dawson. He studied under the seascape artist Charles Napier Hemy at the Royal Academy. He also worked in an art school in Bedford Row. Dawson joined the navy during World War I and painted naval battles for illustrated magazines. He first met his mentor, Hemy, while on leave from the Royal Navy and frequented his studio in Cornwall. Hemy advised Dawson, “You must follow after me and you must do better than me.”
After the war Dawson became a frequent exhibitor at the Royal Academy in London and began a life-long exclusive relationship with the Gallery Frost & Reed in London. He was also an associate of the Royal Society of Artists and a member of the Royal Society of Marine Artists. He was an official war artist during World War II.
Dawson’s paintings are instantly recognizable by many. He developed a style and approach to marine painting that was completely his own, it was consistent throughout his long developing career. Dawson combined what he called ‘portraits’ of clipper ships and racing yachts with ‘landscapes’ at sea in order to lure the viewer into “that moment of time”, as he said, in which “you can hear the sea –that sea.” The dazzling array of oceans and skies in Dawson’s work is encapsulated by his evocative titles such as “Song of the Sea” or “Vast Heaving”. Dawson was as at ease painting Queen Elizabeth’s Royal Yacht “Bluebottle” racing in the Solent as he was summoning the great clipper ship “Cutty Sark” from its noble past.
“Shortly before his death in 1973,” writes Ron Ranson in his 1993 monograph, “a remarkable tribute was made to Montague Dawson. He looked out of his window one day to see two fully rigged training ships, the Royalist and the Sir Winston Churchill, apparently sailing straight towards his house on the shore. At what appeared to be the very last moment, they turned about, and both ships dipped their ensigns in salute to the man who had probably done more than any other to capture the magic and majesty of sail” (Ron Ranson, The Maritime Paintings of Montague Dawson, Newton Abbot, Devon, 1993, p. 15).
Museum Collections:
Laing Art Gallery, Newcastle upon Tyne
McLean Museum and Art Gallery, Greenock
National Maritime Museum, Greenwich
North Carolina Museum of Art, Raleigh, NC
Royal Naval Museum, Portsmouth
Southampton City Art Gallery, Southampton
Tyne and Wear Museum, Newcastle upon Tyne