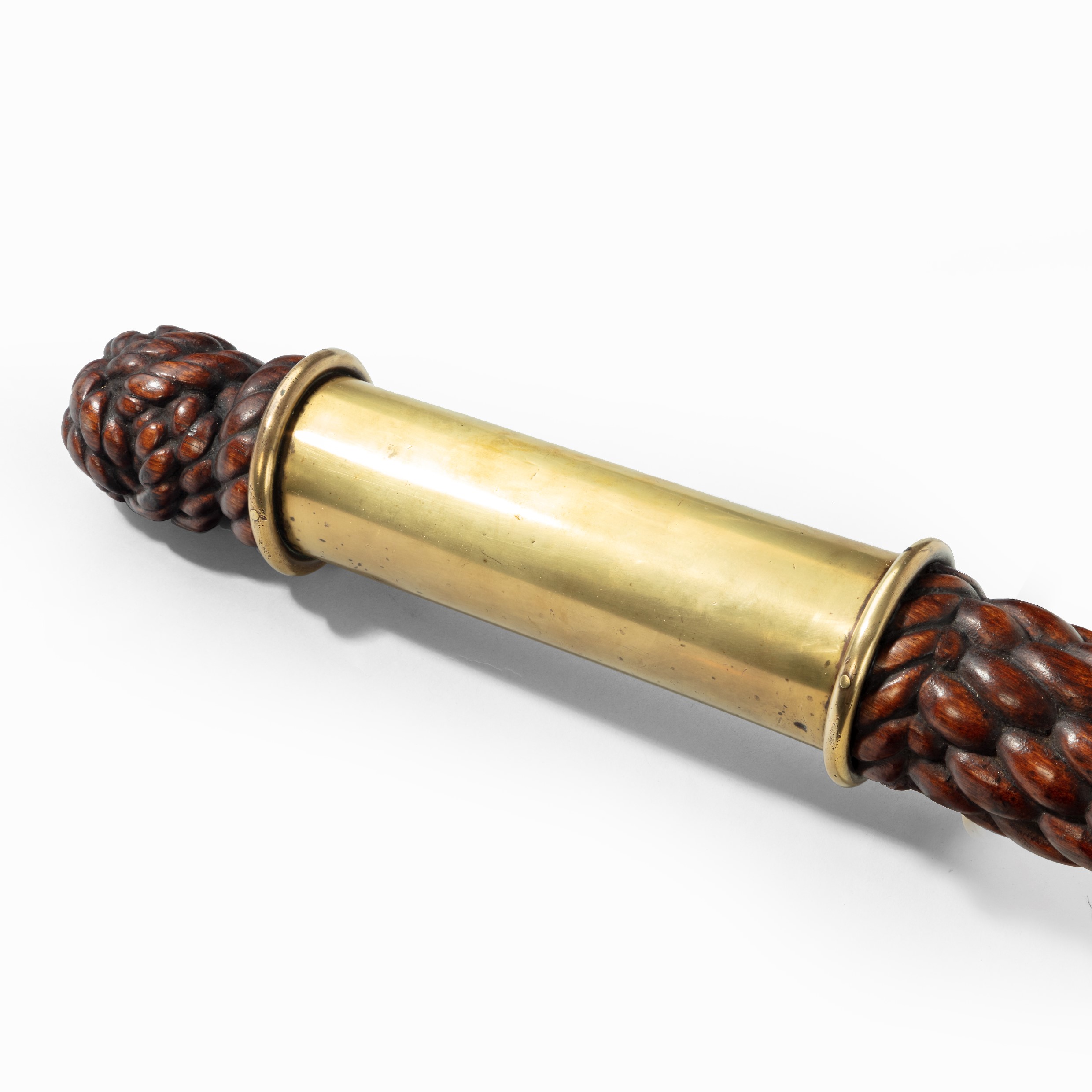 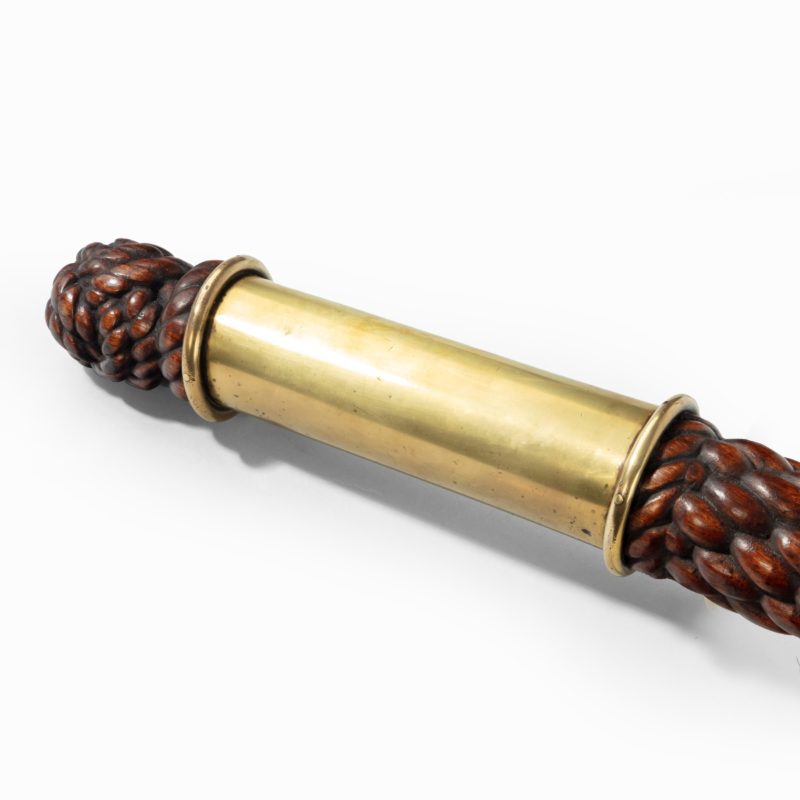 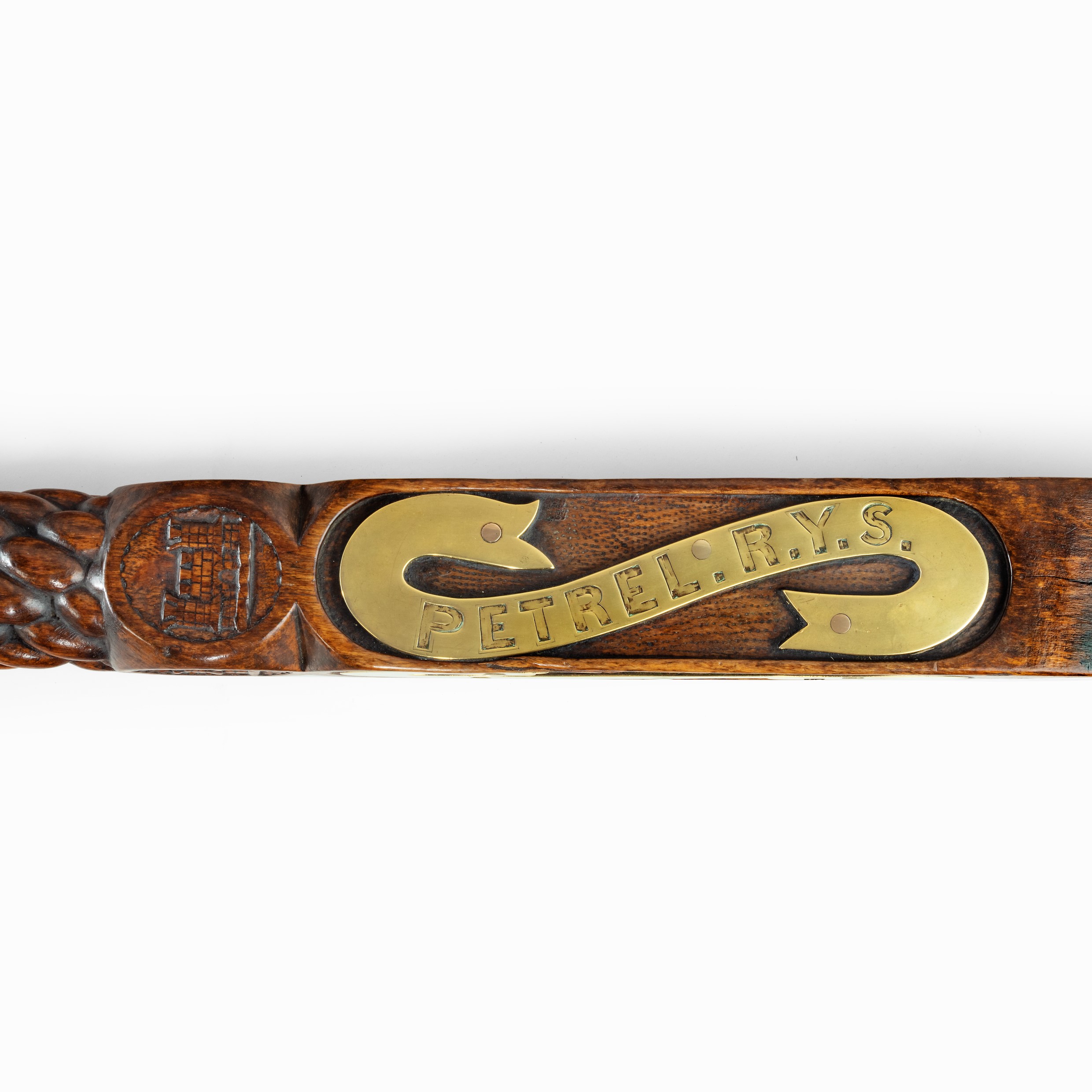 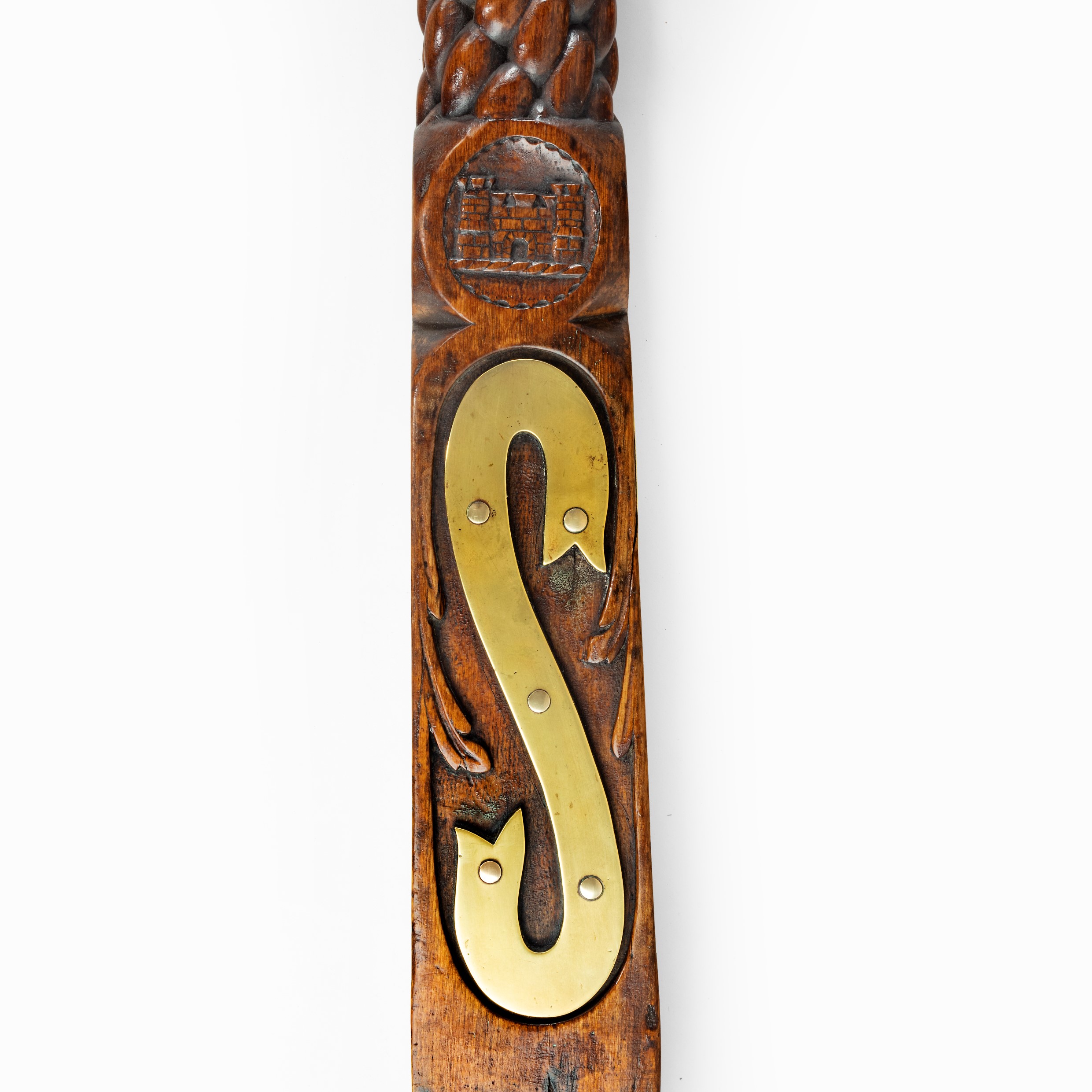 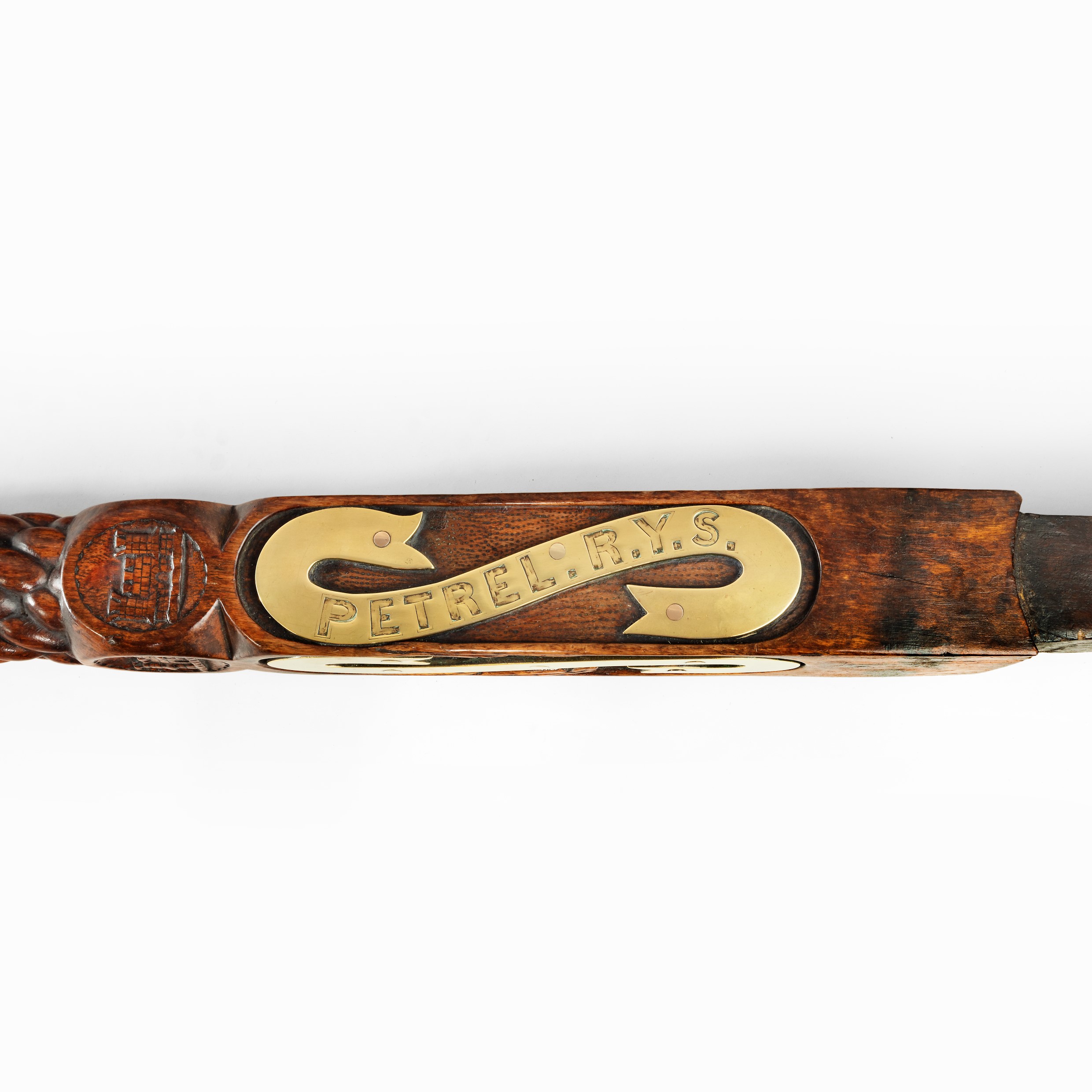 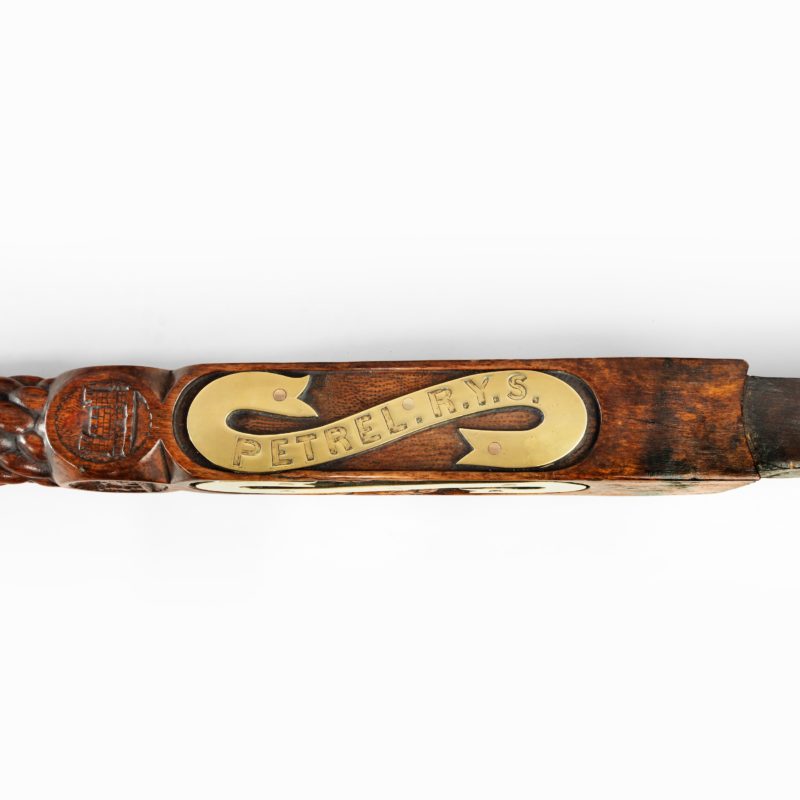 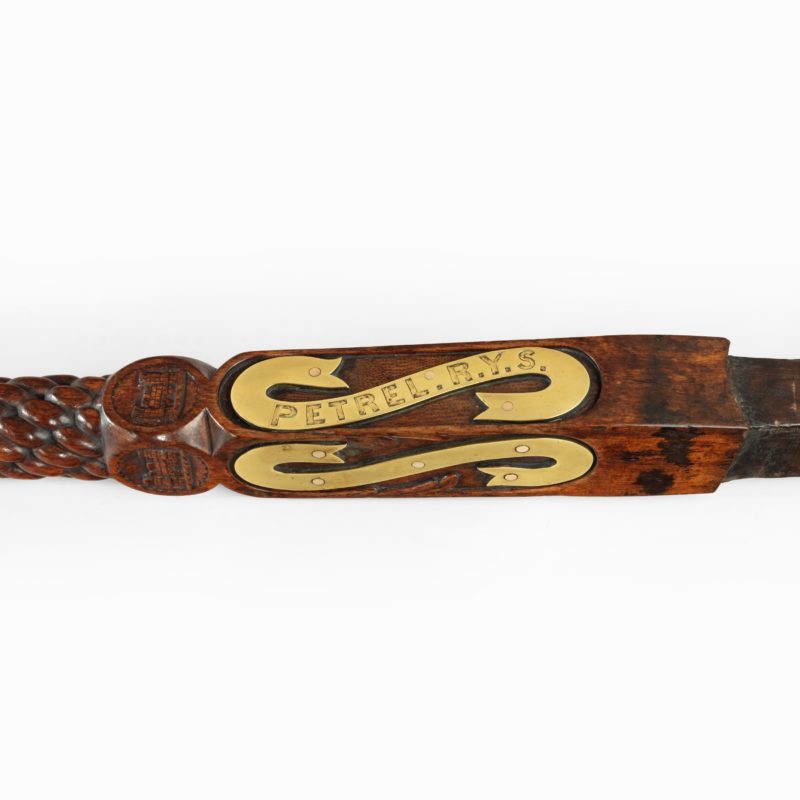 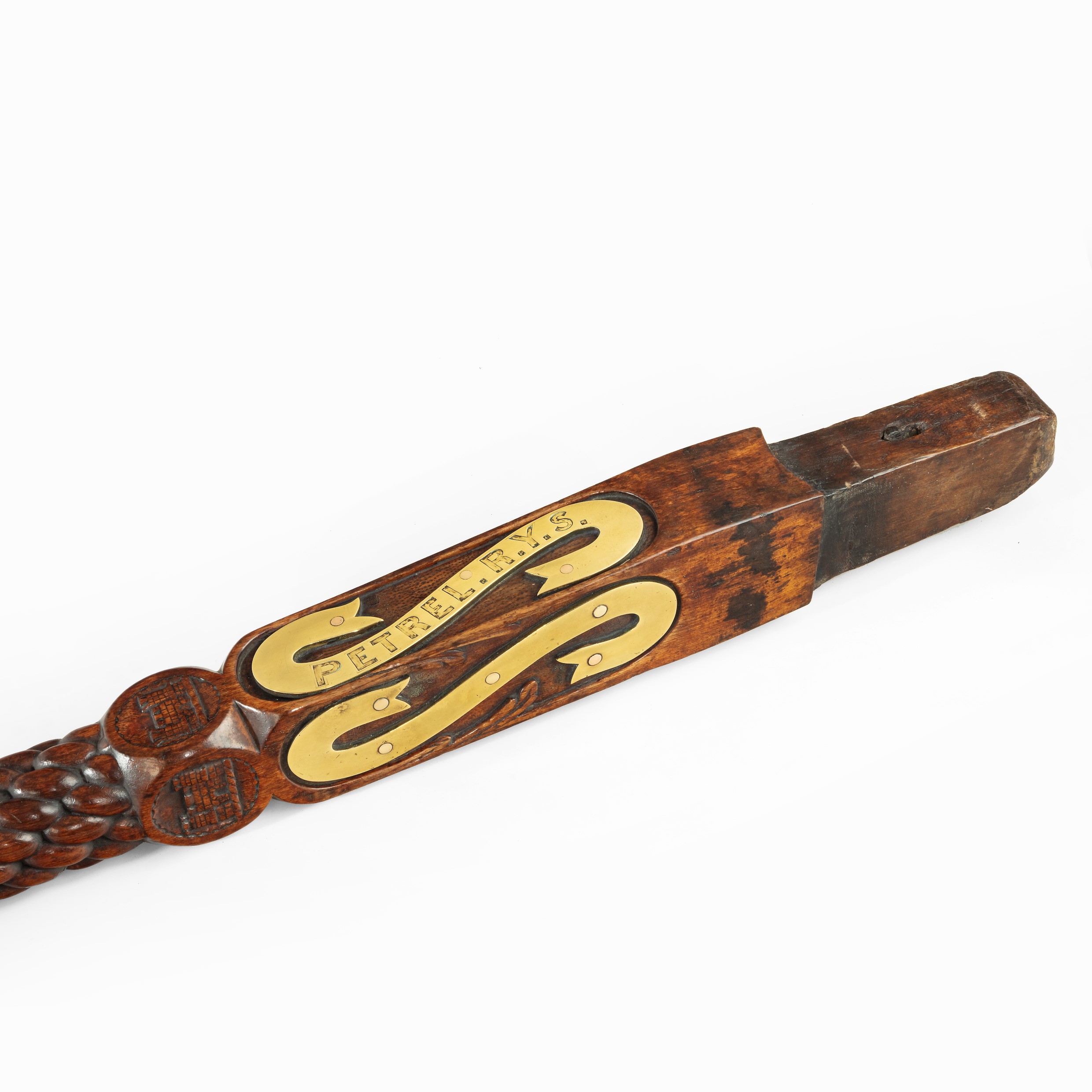 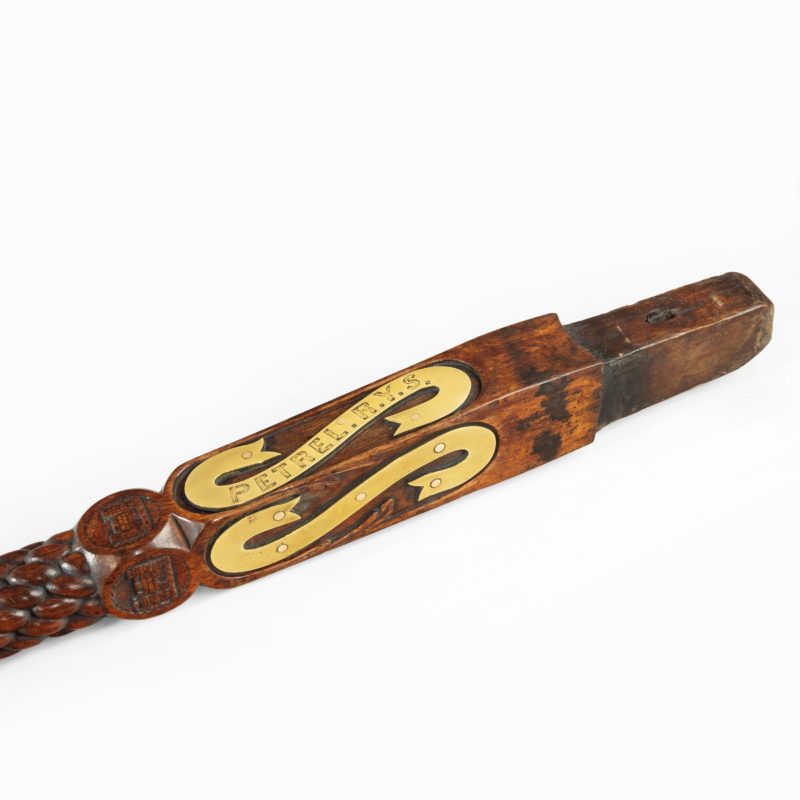 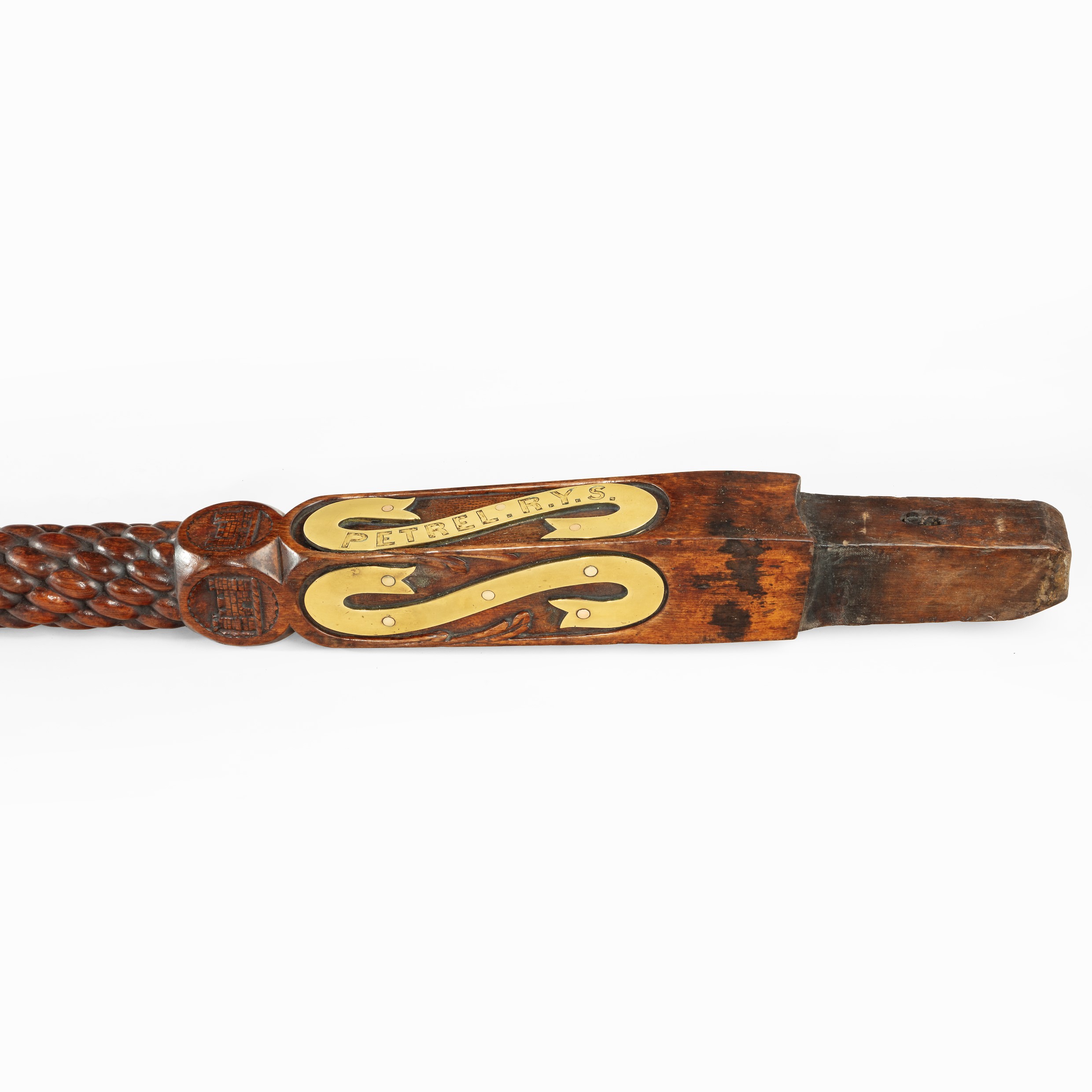 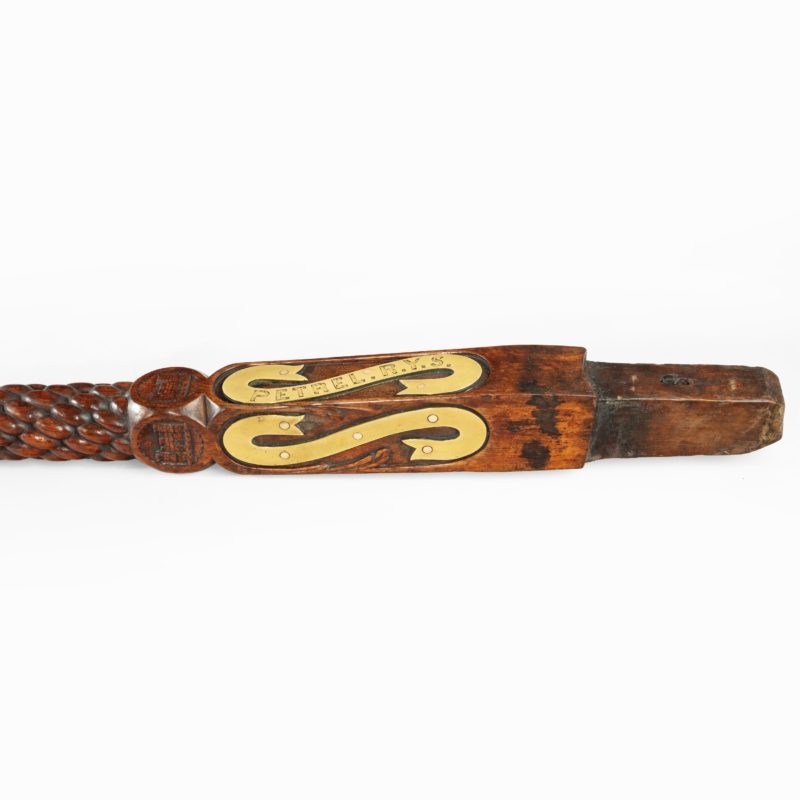 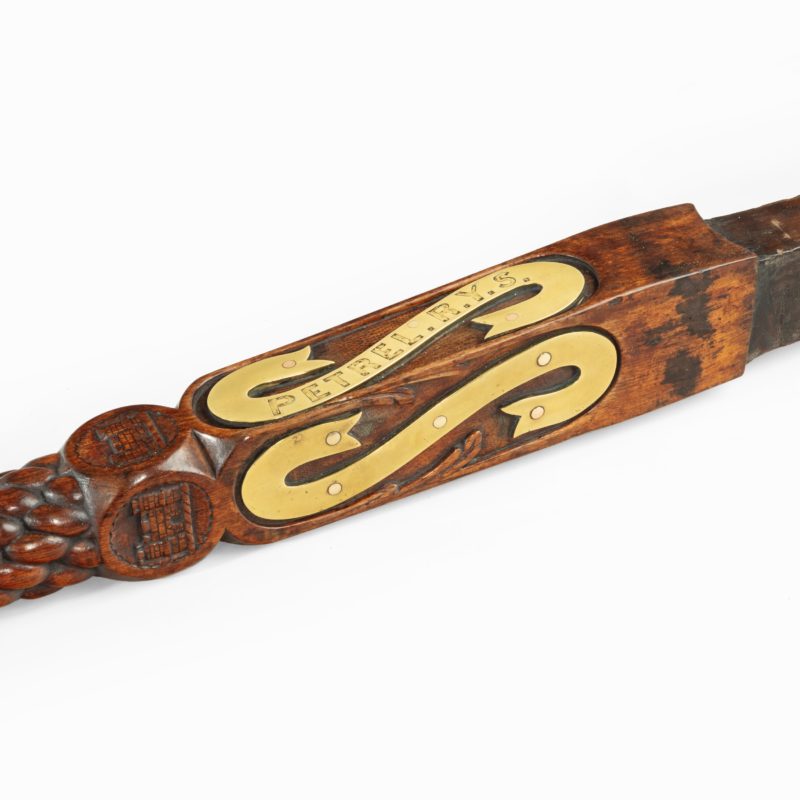 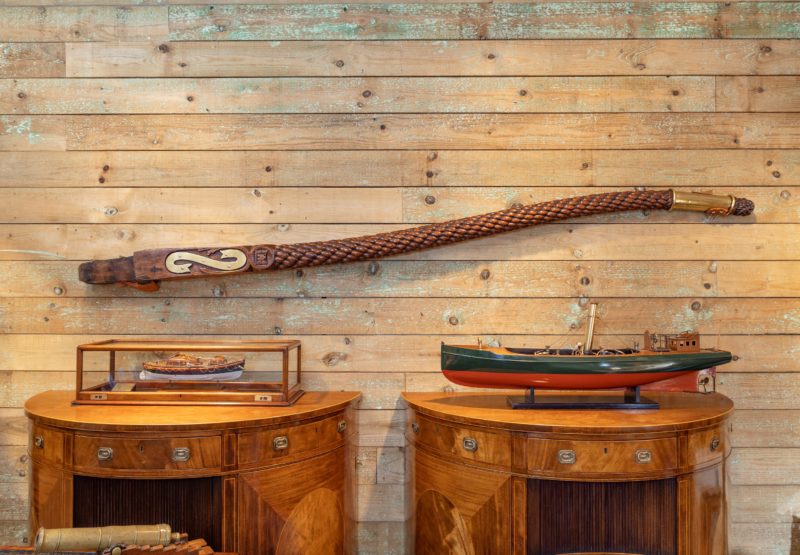 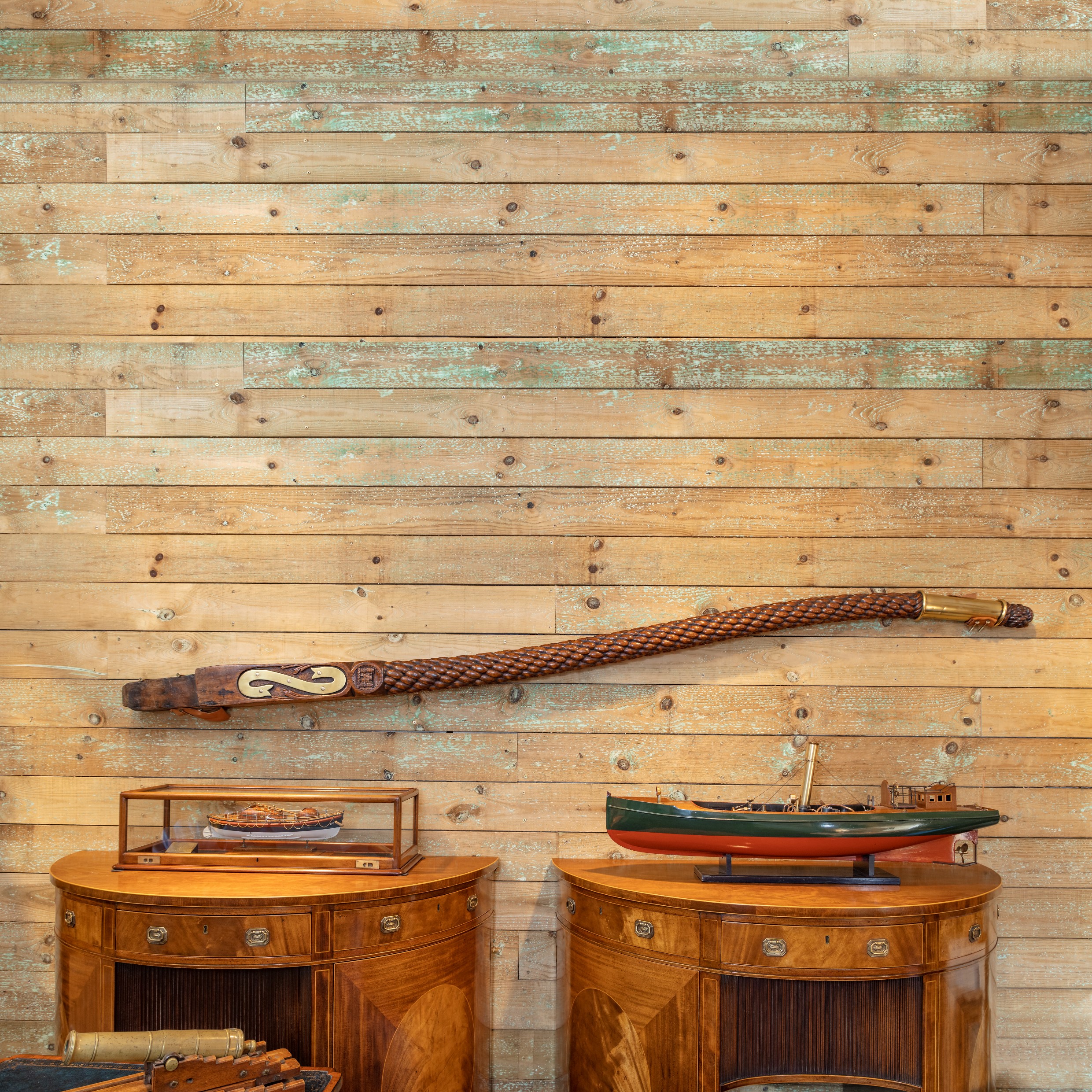 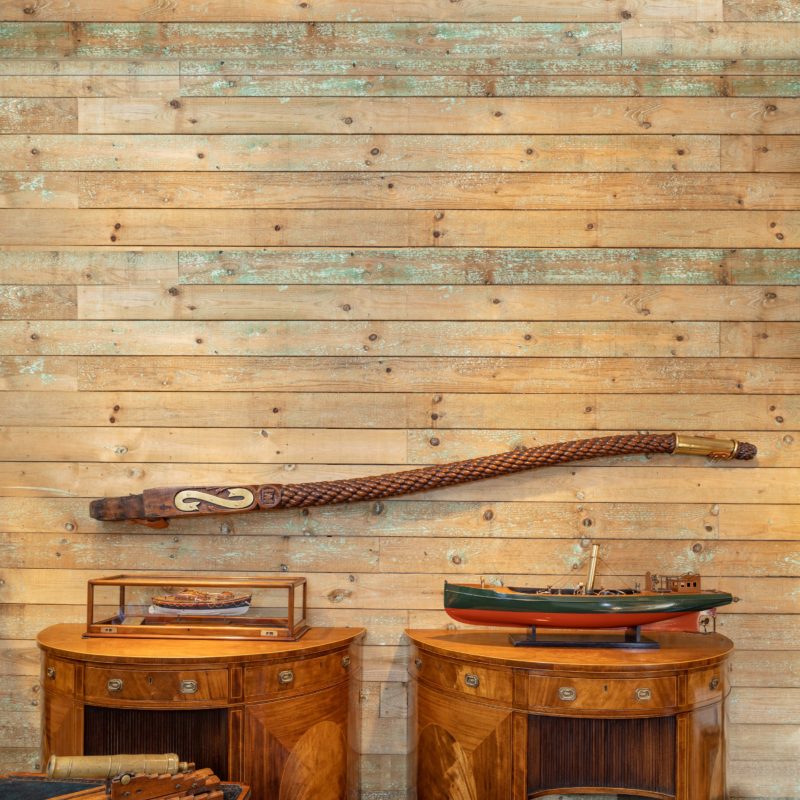 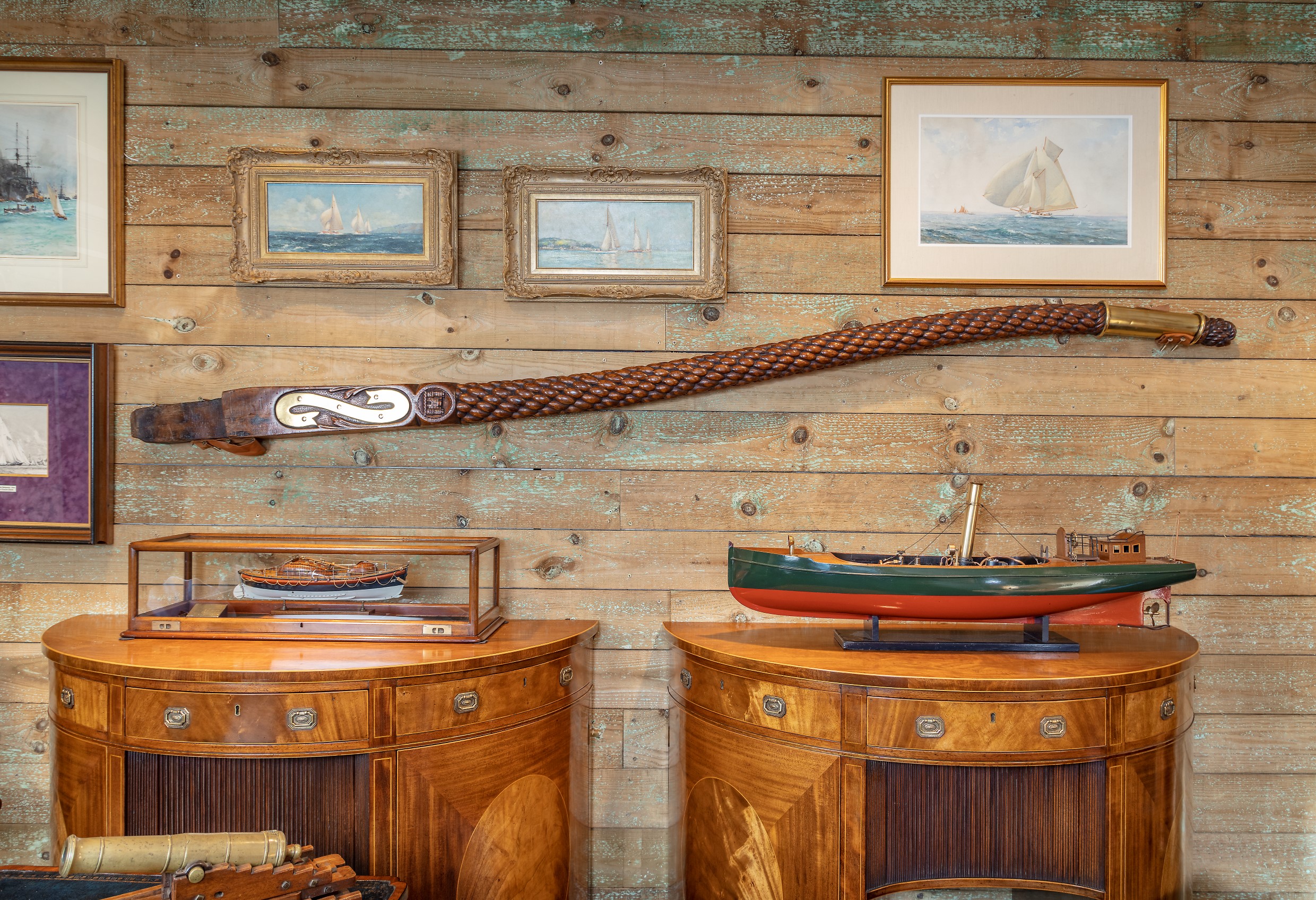 A substantial yacht’s tiller from the schooner Petrel R.Y.S., circa 1852

A substantial yacht’s tiller from the schooner Petrel R.Y.S., circa 1852. This mahogany tiller has a square section rudder head with three inset brass S-shaped banners flanked by a carved castle roundel, the top banner inscribed ‘Petrel R.Y.S.’.  The shaft is carved throughout with finely observed ropework and terminates in a brass cuff and Turk’s head knot.  English, circa 1852.

In the long and glamorous history of the Royal Yacht Squadron, there were several yachts named Petrel, but only one whose size would require a tiller as large and handsome as this example.  Designed and built by George & Thomas Inman Bros. at Lymington in 1852, this Petrel was a big schooner registered at 110 tons gross (57 net) and measuring 70 feet in length.  She was owned by R.Y.S. member Philip Perceval from 1858 to 1866 and then again from 1867 to 1869.  (Incidentally, his son, who became Sir Philip Hunloke, was generally regarded as one of the 20th century’s greatest helmsman; he won a bronze medal for Great Britain at the 1908 Olympics, was King George V’s Sailing Master on Royal Yacht Britannia from 1920 and commodore of the R. Y. S. from 1943 until 1947.)  Petrel was extended to 84 feet in 1866.  Her next owner was Lord Richard Grosvenor of 76 Brook Street, Mayfair.  Despite being elected to the R. Y.S., Cowes, in May 1870, it would seem he kept Petrel primarily for cruising from Dartmouth, as there is no record of her taking part in any racing activity.