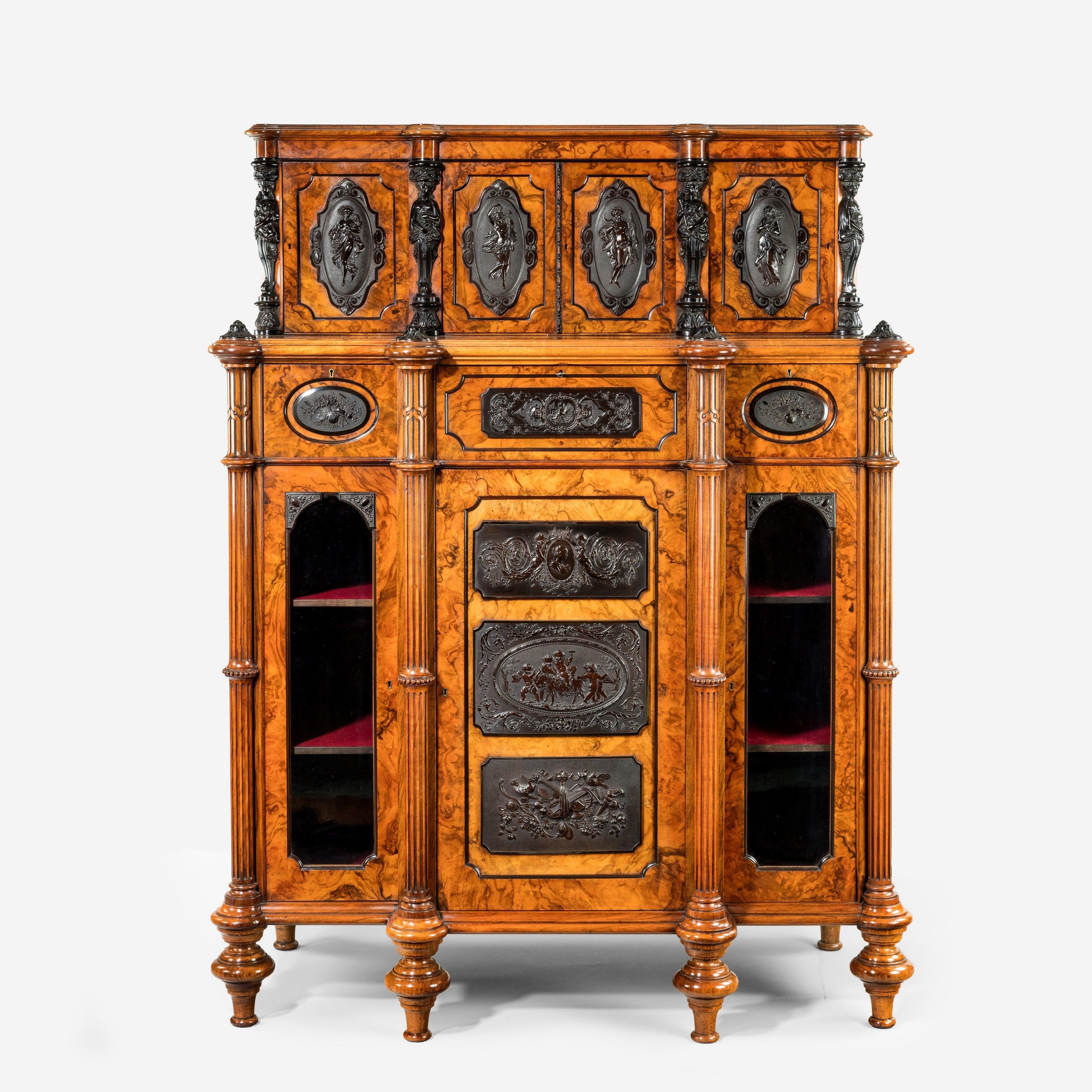 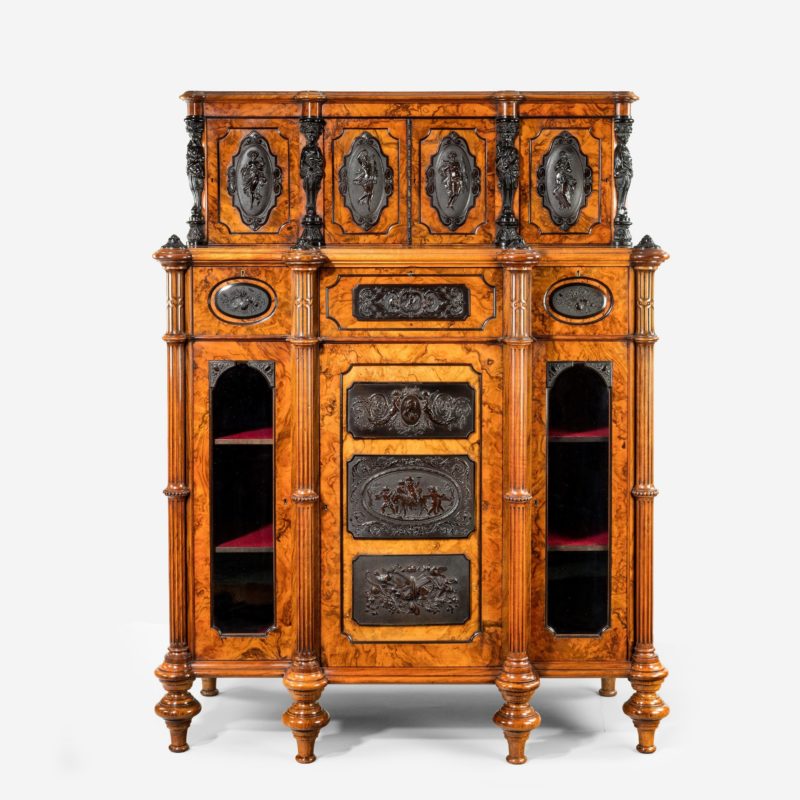 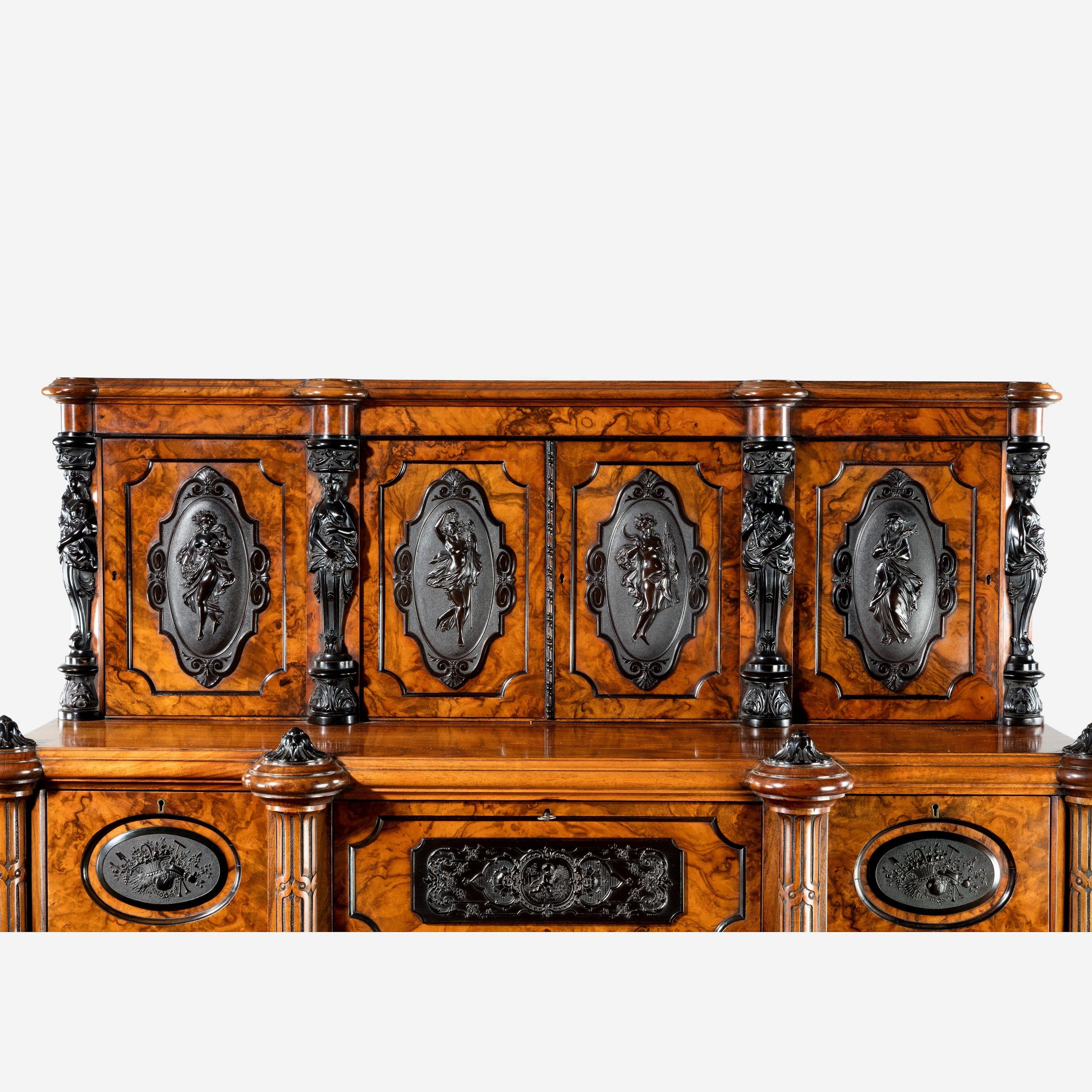 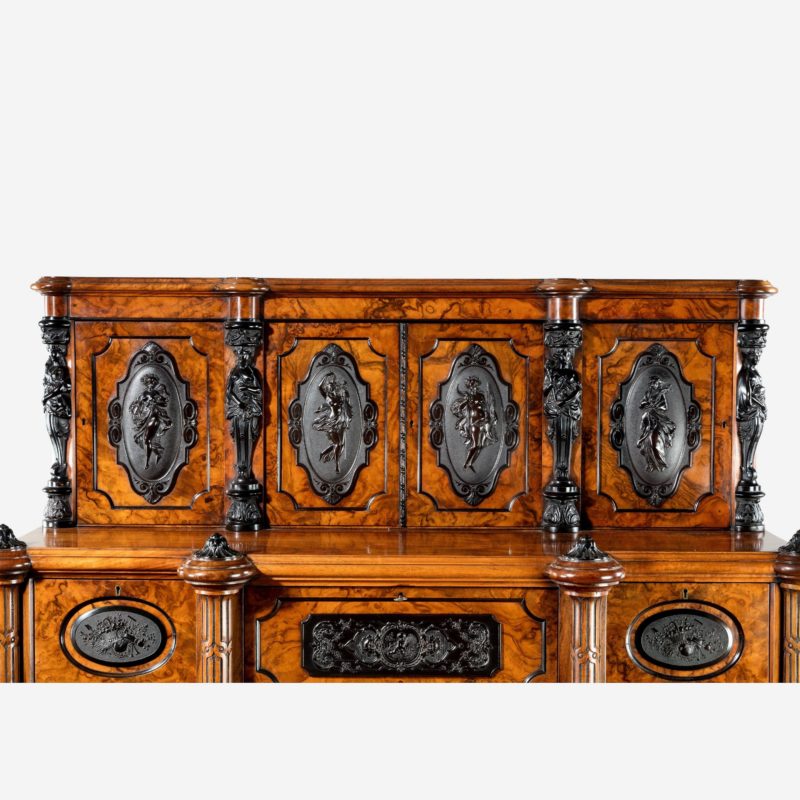 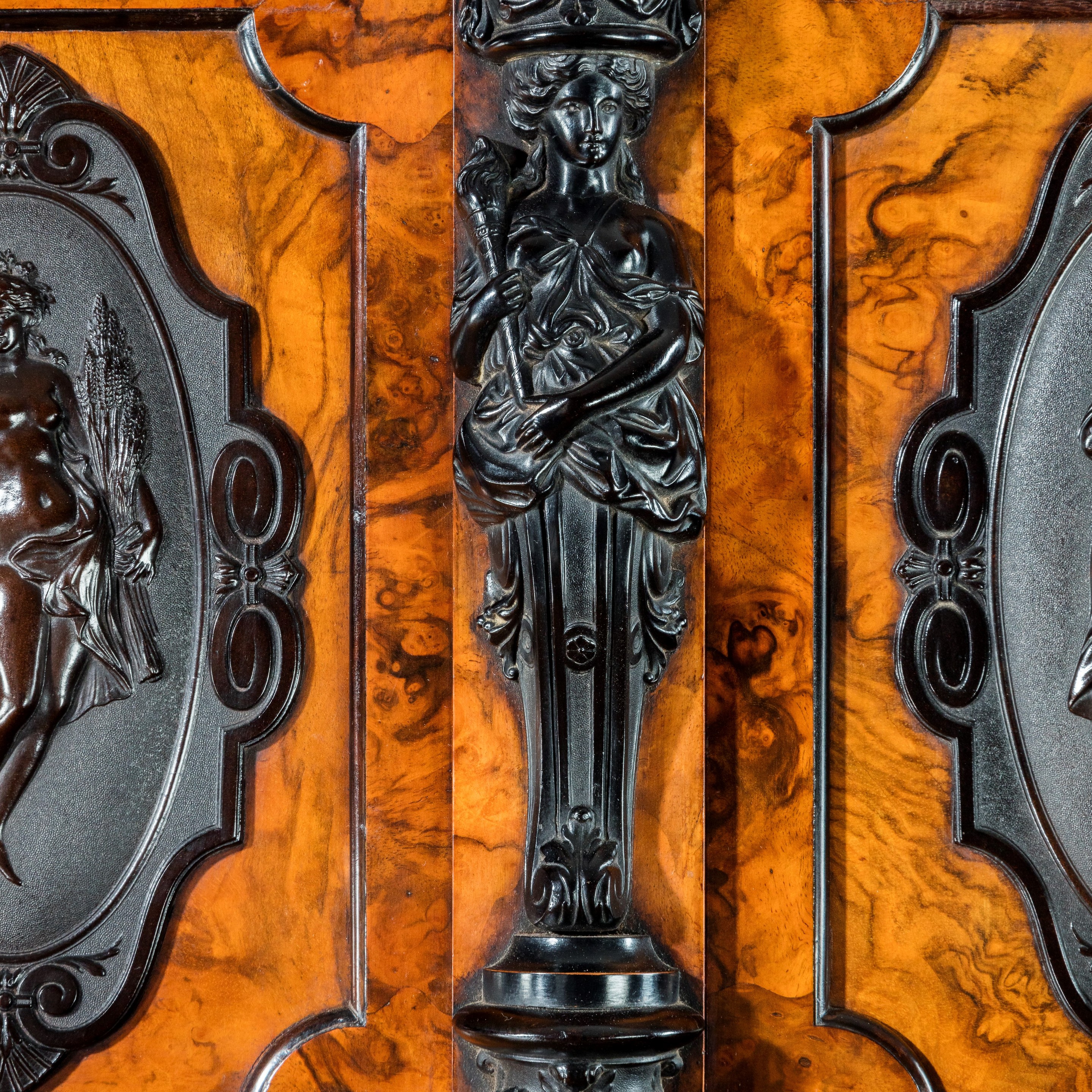 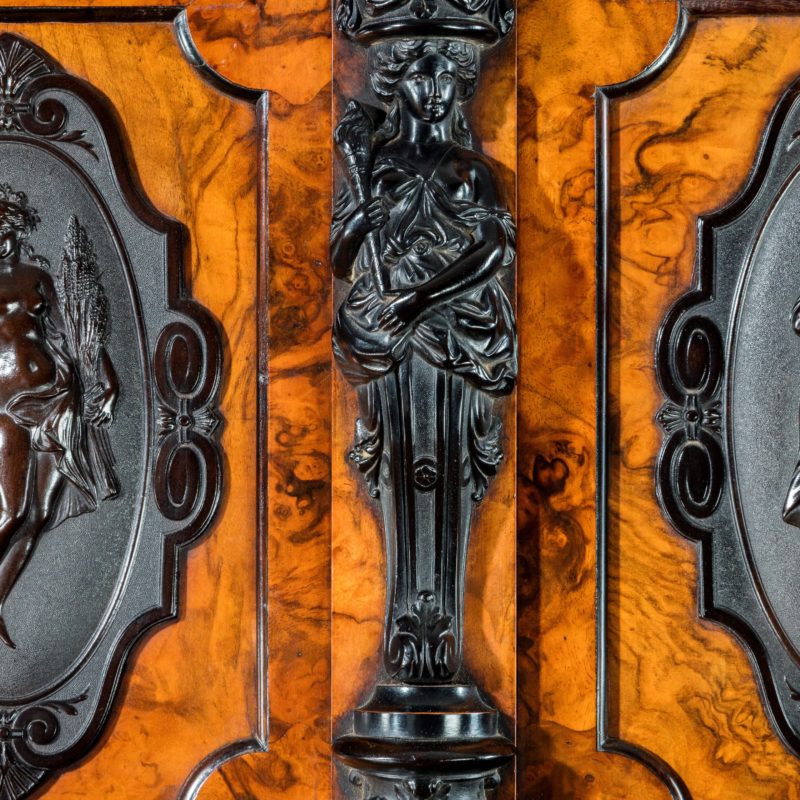 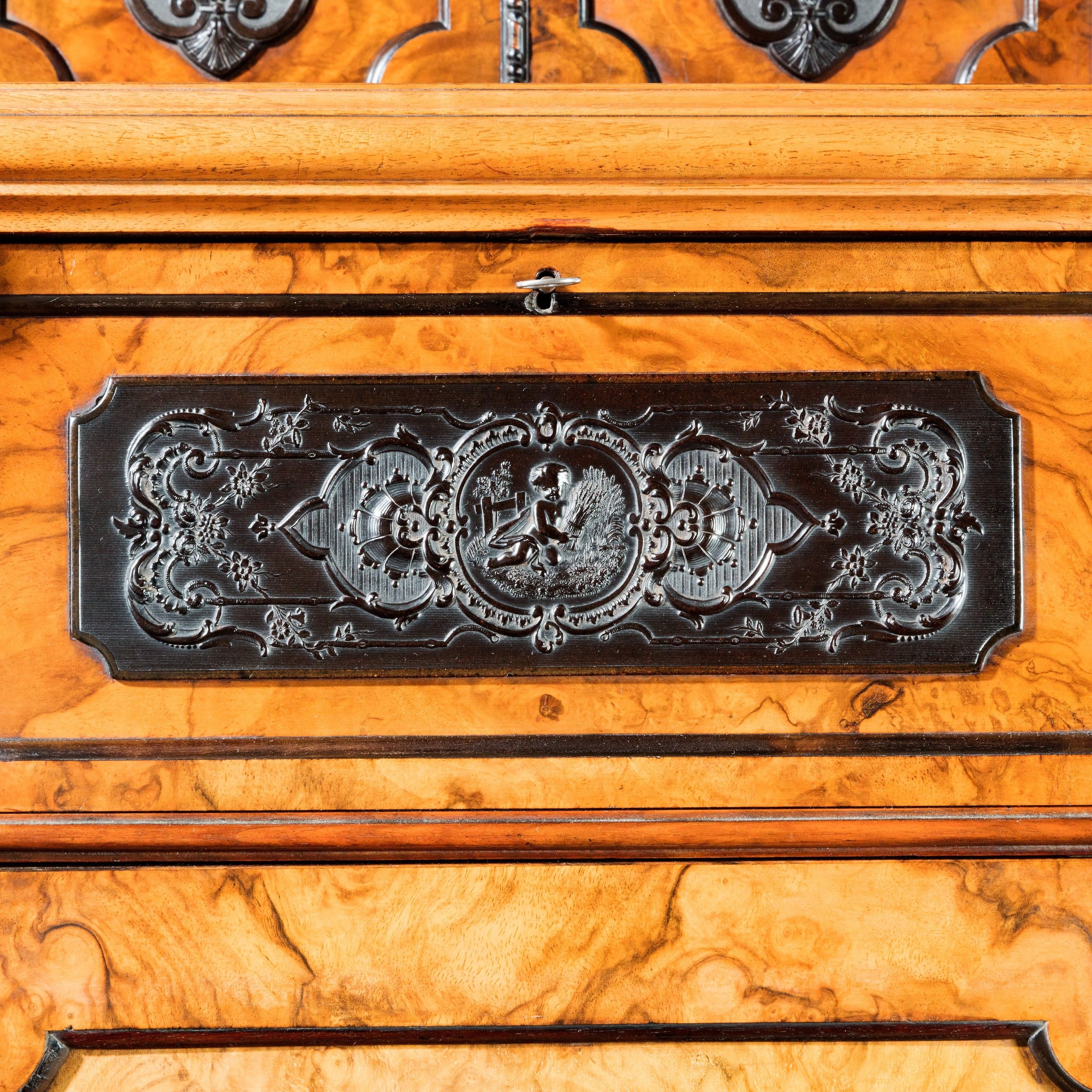 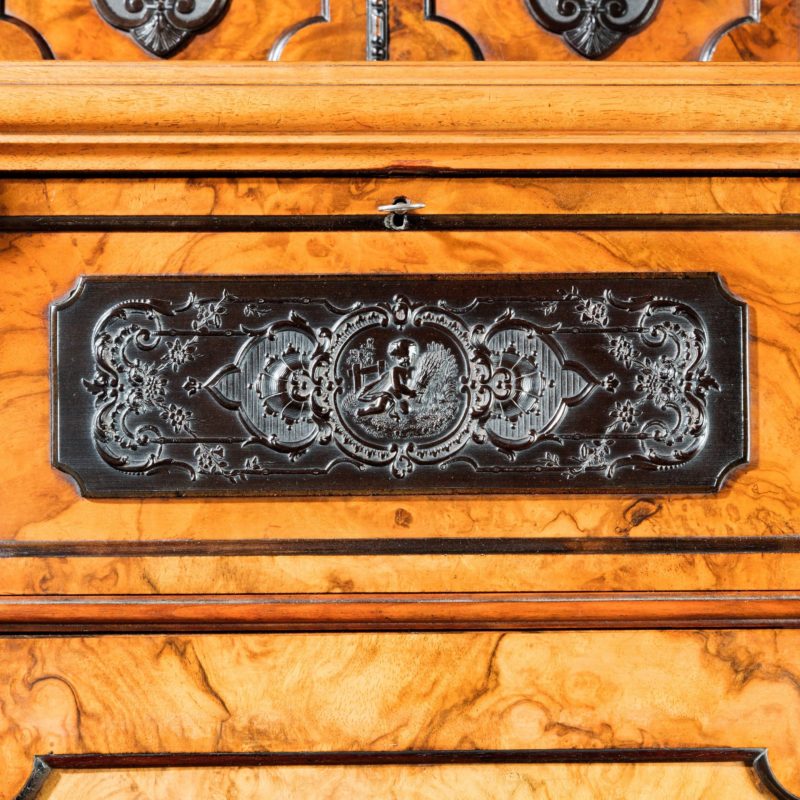 A superb quality burr walnut cabinet of upright rectangular form with three small drawers disguised in a frieze above three glazed cupboards between pilasters, the upper section comprising four smaller cupboards applied with black cartouches showing the Four Seasons flanked by Caryatids, decorated throughout with further plaques of classical motifs including a Bacchanal, a musical trophy, floral baskets, goddesses and rosette bosses, the sides with latticework, all within black stringing.

Provenance: Lambs of Manchester were a renowned cabinet making firm, founded by James Lamb. He was a Manchester cabinetmaker who started in the mid Victorian era. James Lamb was born in 1816, he joined the family business and turned it into a high class interior design, decorating and furnishing firm. The firm had a cabinet making workshop in Castleford and their main gallery in John Dalton Street, Manchester, with vast furniture showrooms over three floors showing their quality pieces for sale.
The firm was to go onto international success winning medals at the London 1862 Exhibition and the Paris 1867 Exhibition.
James Lamb died in 1903, his obituary appeared in The Journal of Decorative Art and British Decorators where it stated that:
His name was a synonym for the best in everything that he did from 1850 – 1885, and he towered over everybody in Lancashire and Yorkshire as maker of high class furniture. His name for 50years stood as a landmark for all that was best in both spheres of industrial art.

Literature: ‘Bois Durci’ was invented and patented in France and England in 1854 by Francois Charles Lepage, and it is made from finely ground wood ‘flour’ mixed with a binder, either egg or blood albumen or gelatine. The wood is probably either ebony or rose wood, giving a black or brown result. The mixture is dried and ground to a fine powder. The powder is placed in a steel mould and compressed in a powerful hydraulic press whilst being heated by steam. The final product has a highly polished finish imparted by the surface of the steel mould