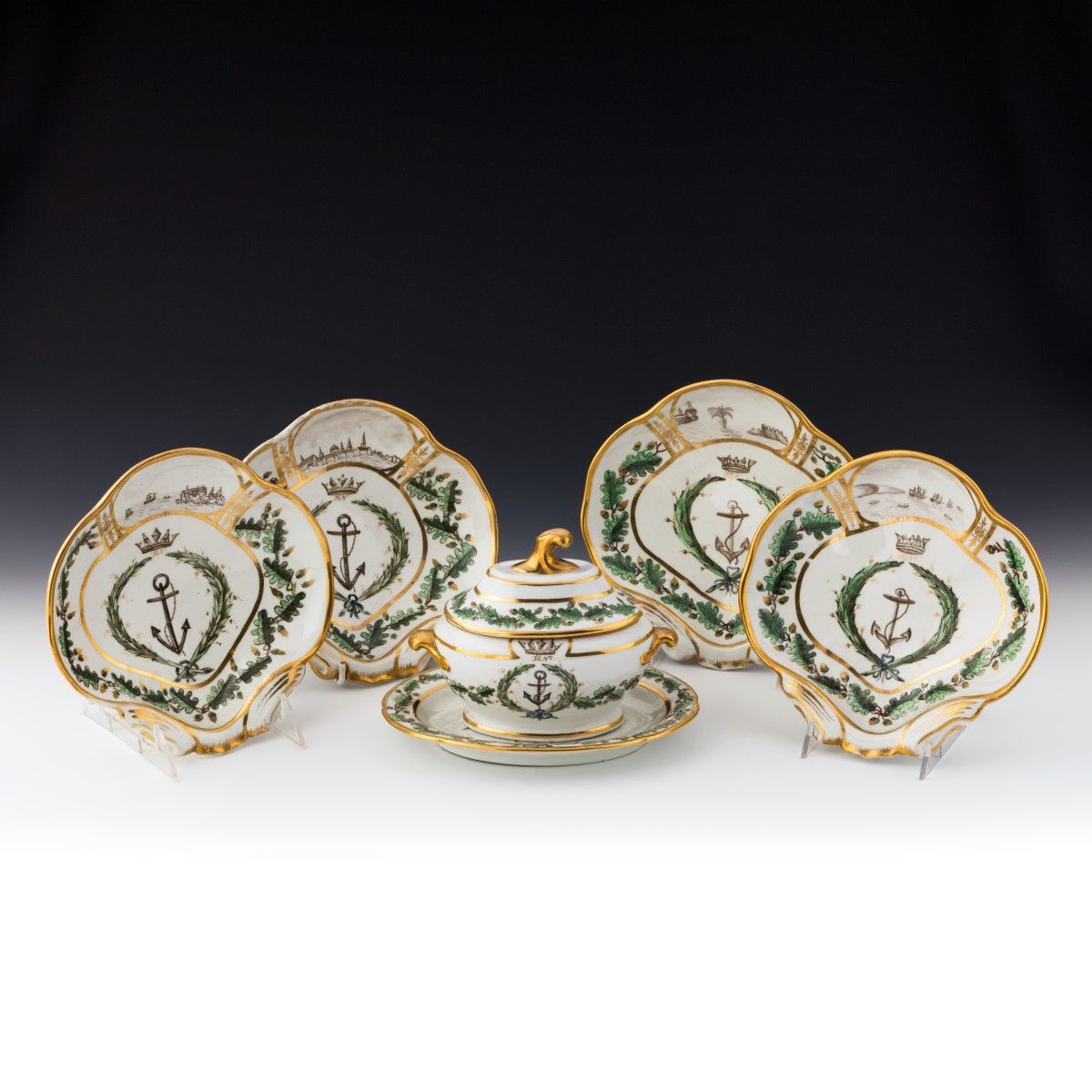 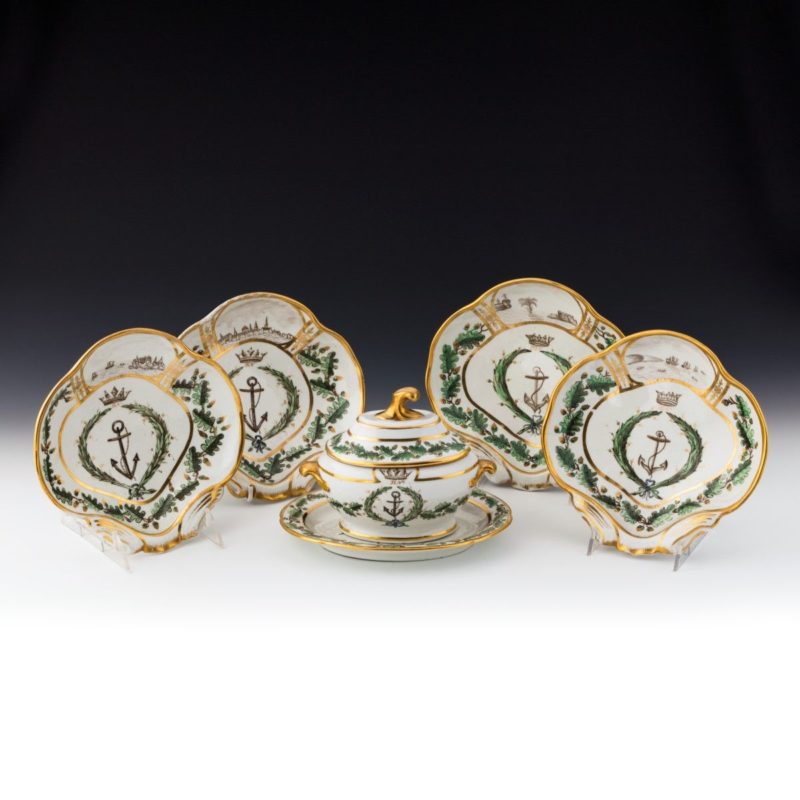 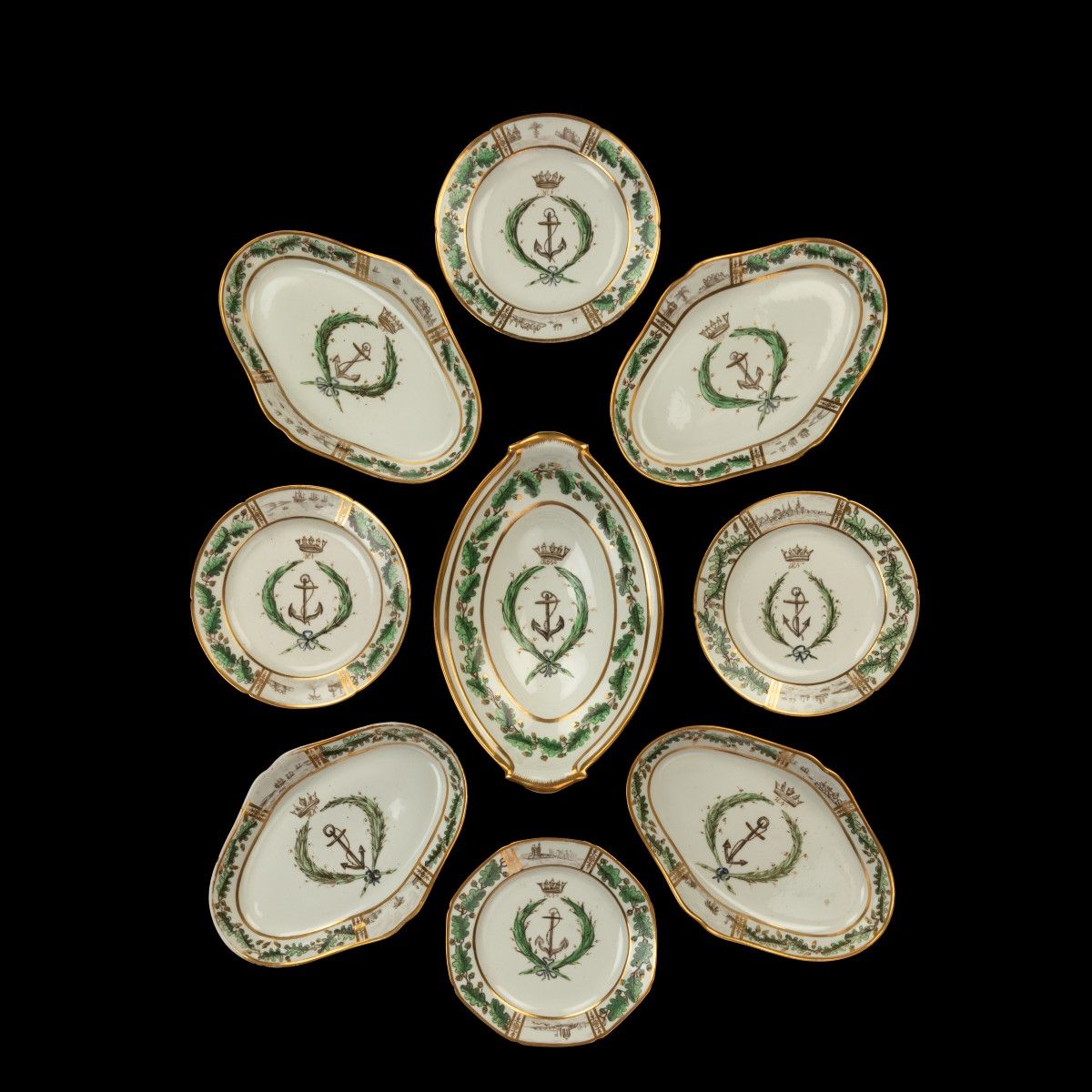 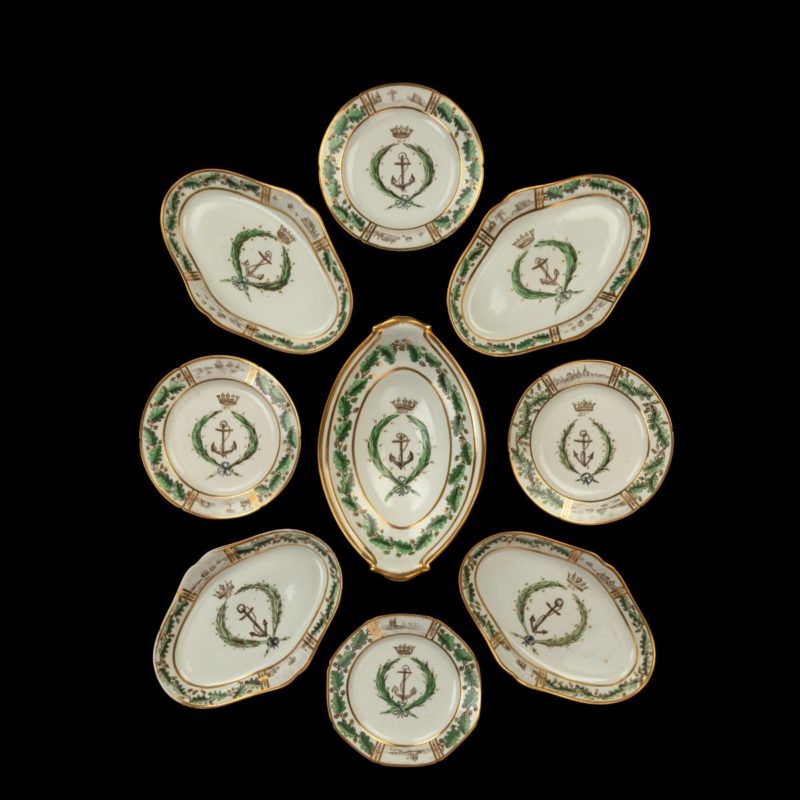 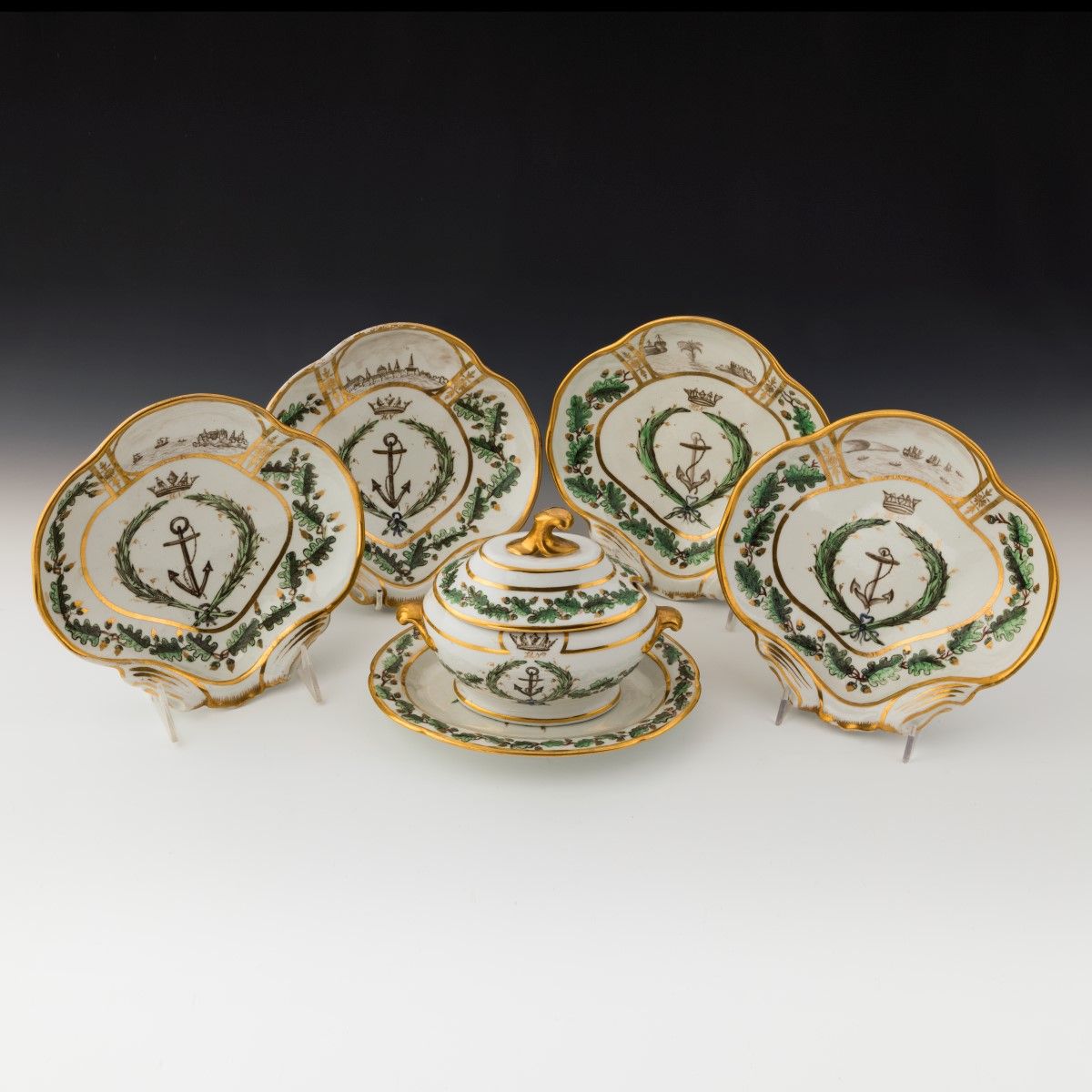 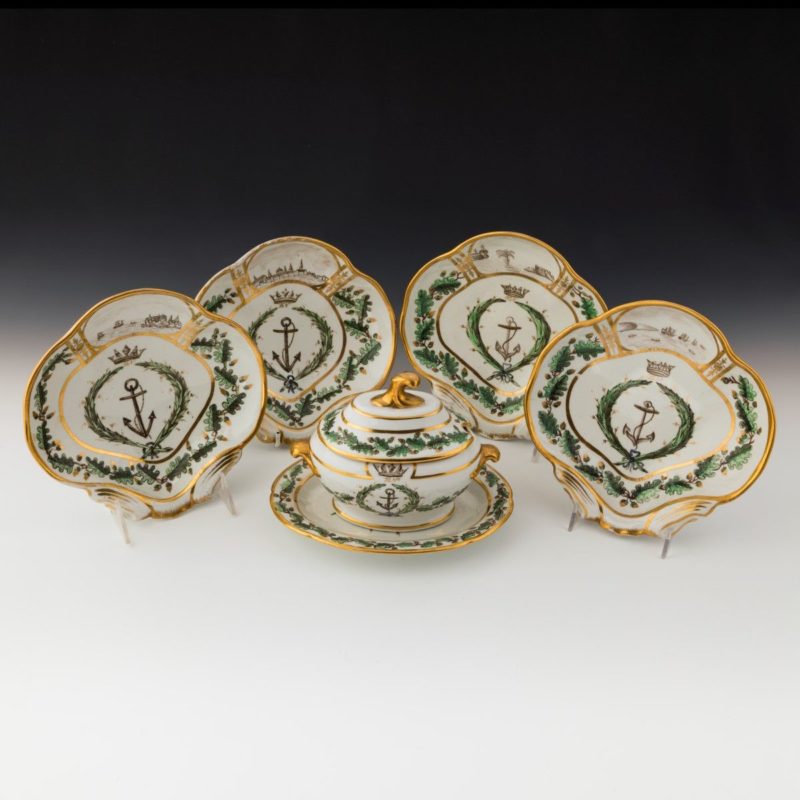 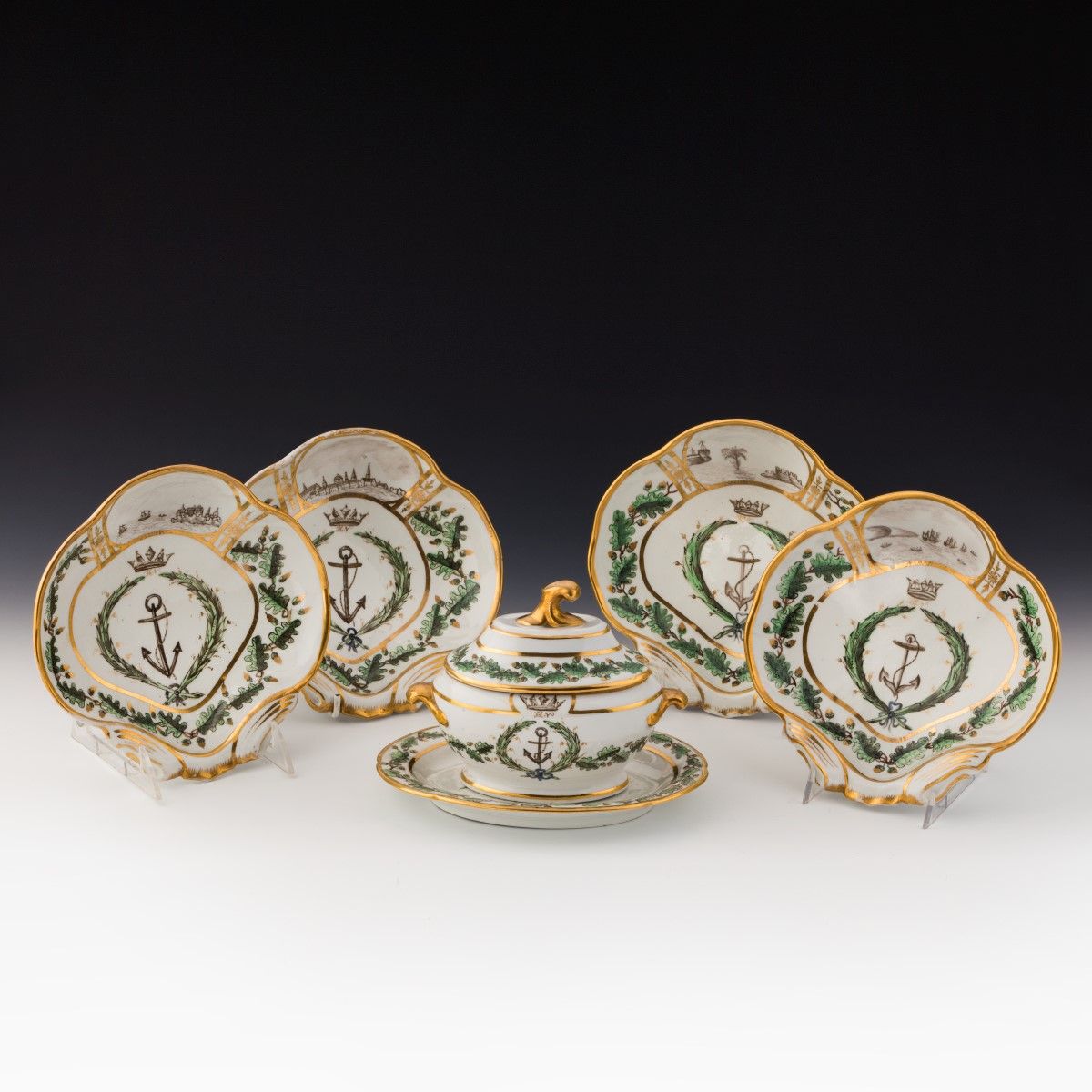 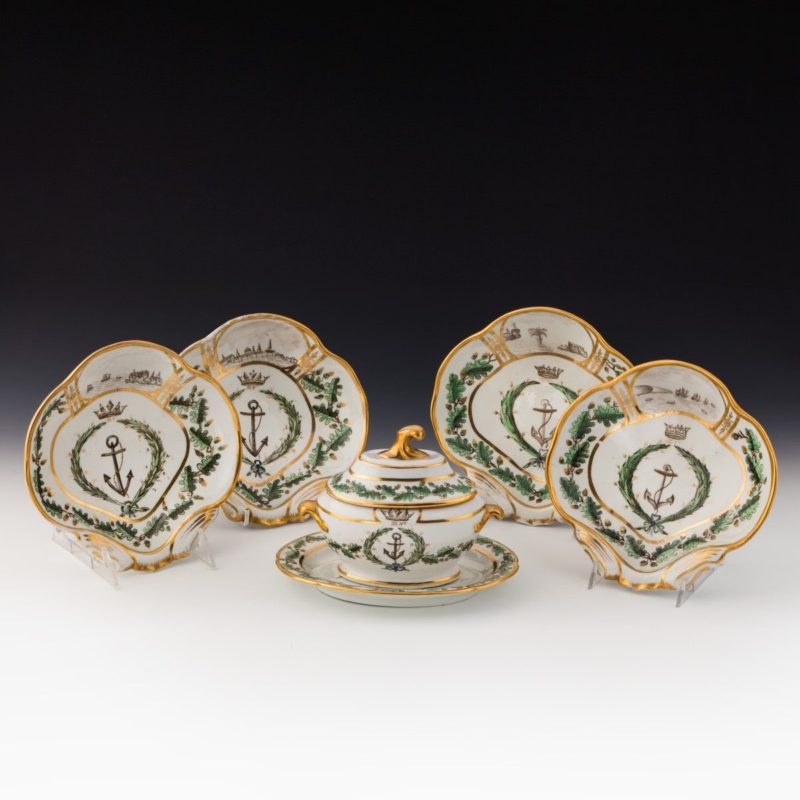 This outstanding dinner service was a gift to Admiral Lord Nelson from Sir William and Lady Hamilton. It is of English, probably Coalport, manufacture decorated in Naples for Nelson’s 40th birthday on 29 September 1798. Each of the twenty-seven pieces is painted in the centre, after designs by Baron de Fages Vaumale (see page 29), with a fouled anchor between palm branches surmounted by a naval coronet and initials HN, the border further painted with trailing oak leaves and with occasional sepia panels depicting views of Alexandria, Aboukir Bay and other Mediterranean scenes, probably after sketches by Cooper Willyams (see page 31). Some of the dishes are painted on the reverse with a black initial H or gilt M.

Believed lost, this part-dessert service comprises all the known surviving pieces of porcelain decorated expressly for the ball held in honour of Nelson’s fortieth birthday at the Palazzo Sessa in Naples on 29 September 1798. Arranged in haste by British Ambassador Sir William Hamilton and his wife Emma, the ball took place just one week after Nelson’s triumphant return to Naples following the Battle of the Nile on 1 August. Writing to his wife the day before the fête, Nelson described how ‘The preparations of Lady Hamilton for celebrating my birthday tomorrow are enough to fill me with vanity. Every ribbon every button has ‘Nelson’ etc., the whole service are ‘H.N. Glorious 1st August’’. Originally in the white, the service may have been stored in the ambassadorial collection at the Palazzo Sessa for decorating in just this manner for visiting dignitaries.

Over 1700 people attended the ball which cost Sir William almost a thousand pounds. ‘Such a style of elegance as I never saw or shall again’, an overawed Nelson reported. The entertainment began with a private dinner
for 80 for which this dessert service was painted locally, and hurriedly; probably at the royal porcelain factory at the Capodimonte Palace which Nelson would visit a few days after the event. The distinctive designs on the service are directly derived from a drawing presented to Nelson by Baron de Fages Vaumale, a French émigré officer resident at Naples (see illustration opposite). Titled An Emblematical Drawing of Large Proportions, the picture was arranged with a series of images symbolising Nelson’s victory at the Nile including the repeated use of fouled anchors surmounted by the initials HN, tied bows and naval coronets between palm branches: all motifs duplicated on the birthday service. (Nelson ceased using the monogram HN after his elevation to the peerage as Baron Nelson of the Nile in October 1798, then Duke of Bronte in 1800 when he adopted the monogram NB.) It seems likely that a monumental version of the baron’s drawing was then used as a painted backdrop for the entertainment at the Palazzo Sessa.

The landscape and shipping vignettes on the borders of the service closely resemble sketches completed by Cooper Willyams (1762-1816) who served as chaplain in Swiftsure at the Battle of the Nile. Willyams’s drawings of his Voyage up the Mediterranean (see page 31) would be published in 1802 and, as an eyewitness account of the battle and its aftermath, proved an instant success. A copy of Willyam’s book was later found in Nelson’s library. It appears Nelson returned to England with this part of his ‘Birthday Service’ as a souvenir of his eventful stay in Naples. No other pieces from the service are known to survive. It was then used by Nelson as the pattern for his subsequent services known as the ‘Nelson set’, a dessert service of Paris porcelain and a tea service of Coalport decorated with Nelson’s arms; and his ‘Baltic Set’, a tea service and a dessert set in Paris porcelain, with a dinner set in creamware. Both these celebrated sets display the same oak-leaf border as the original Birthday Service, with the ‘Baltic Set’ also repeating the fouled anchor motif.

Exhibitions: On loan at the National Maritime Museum, Greenwich until 2005