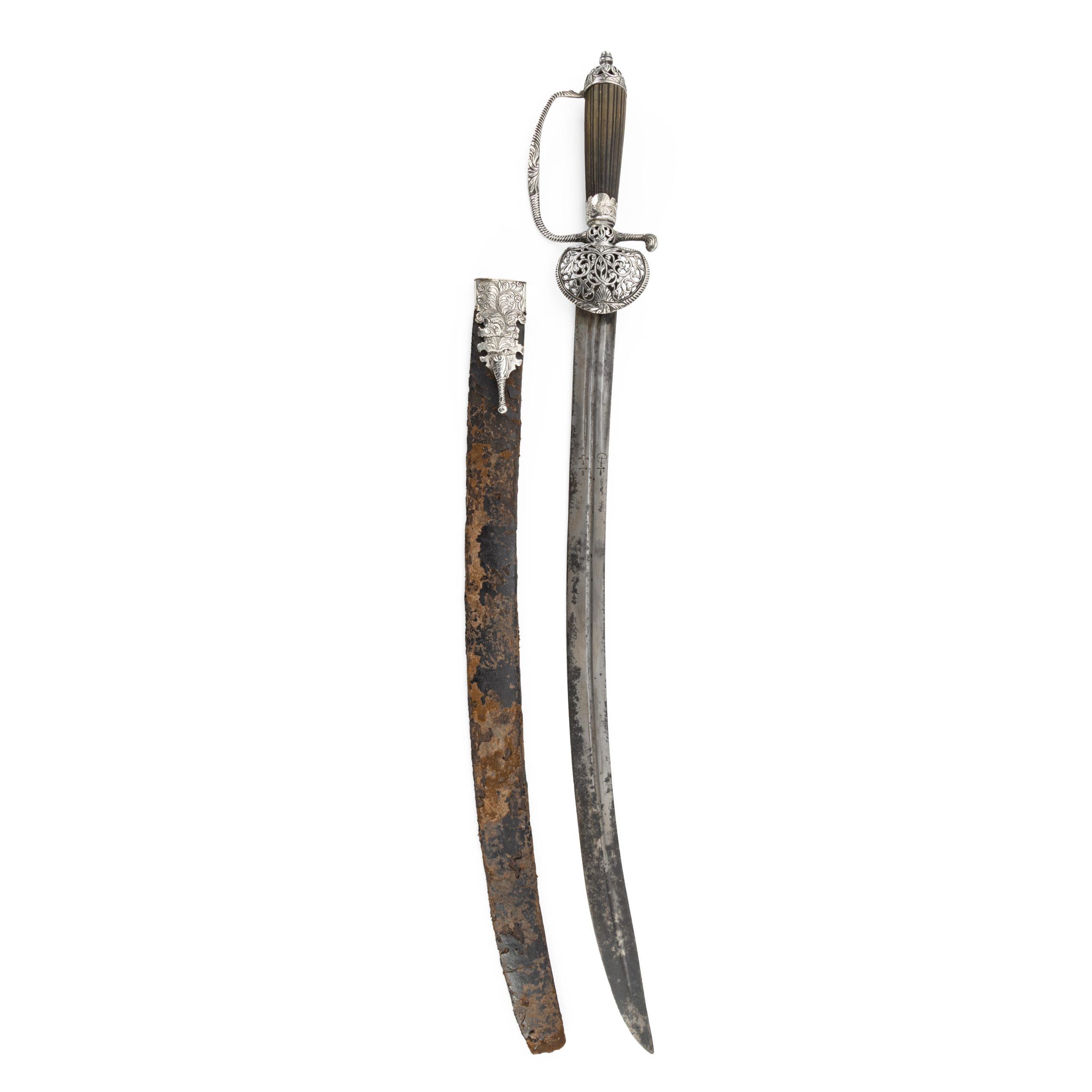 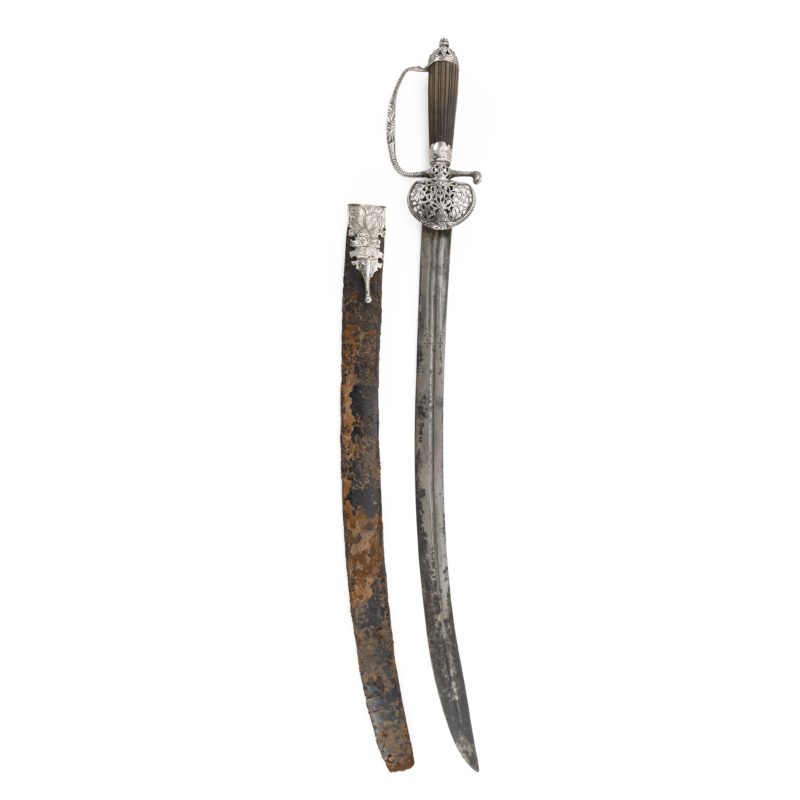 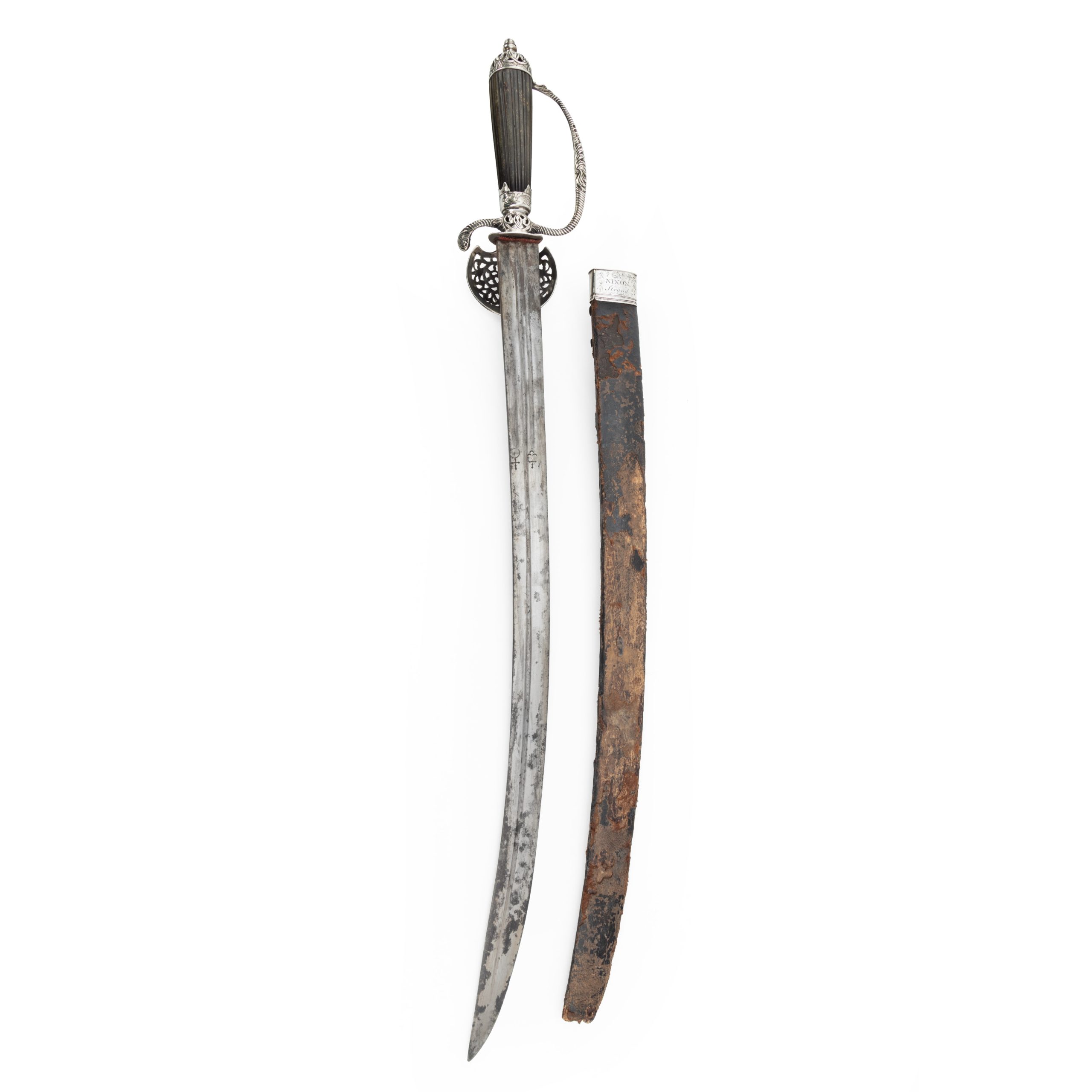 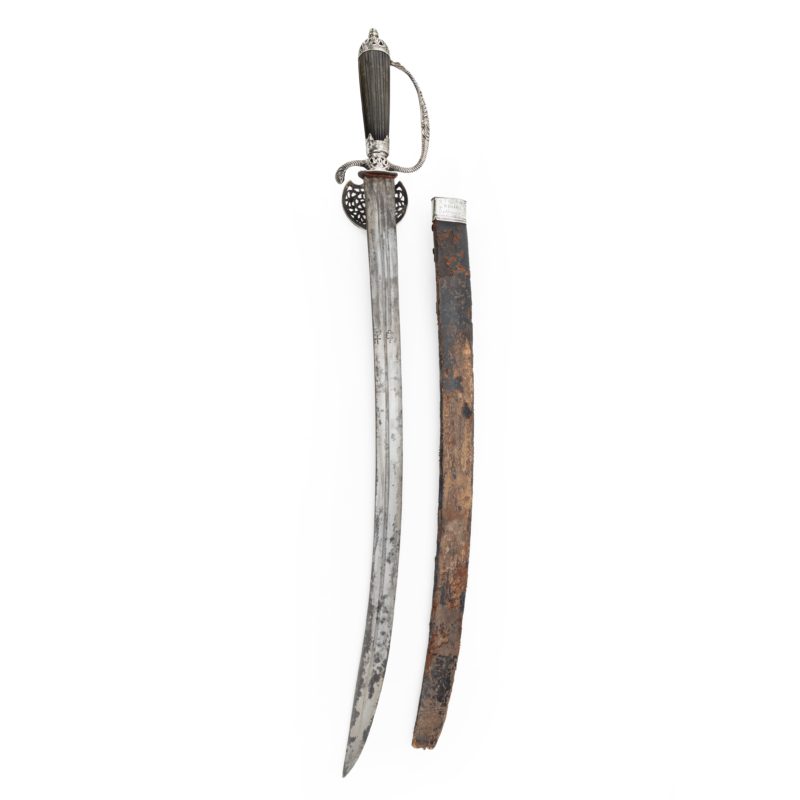 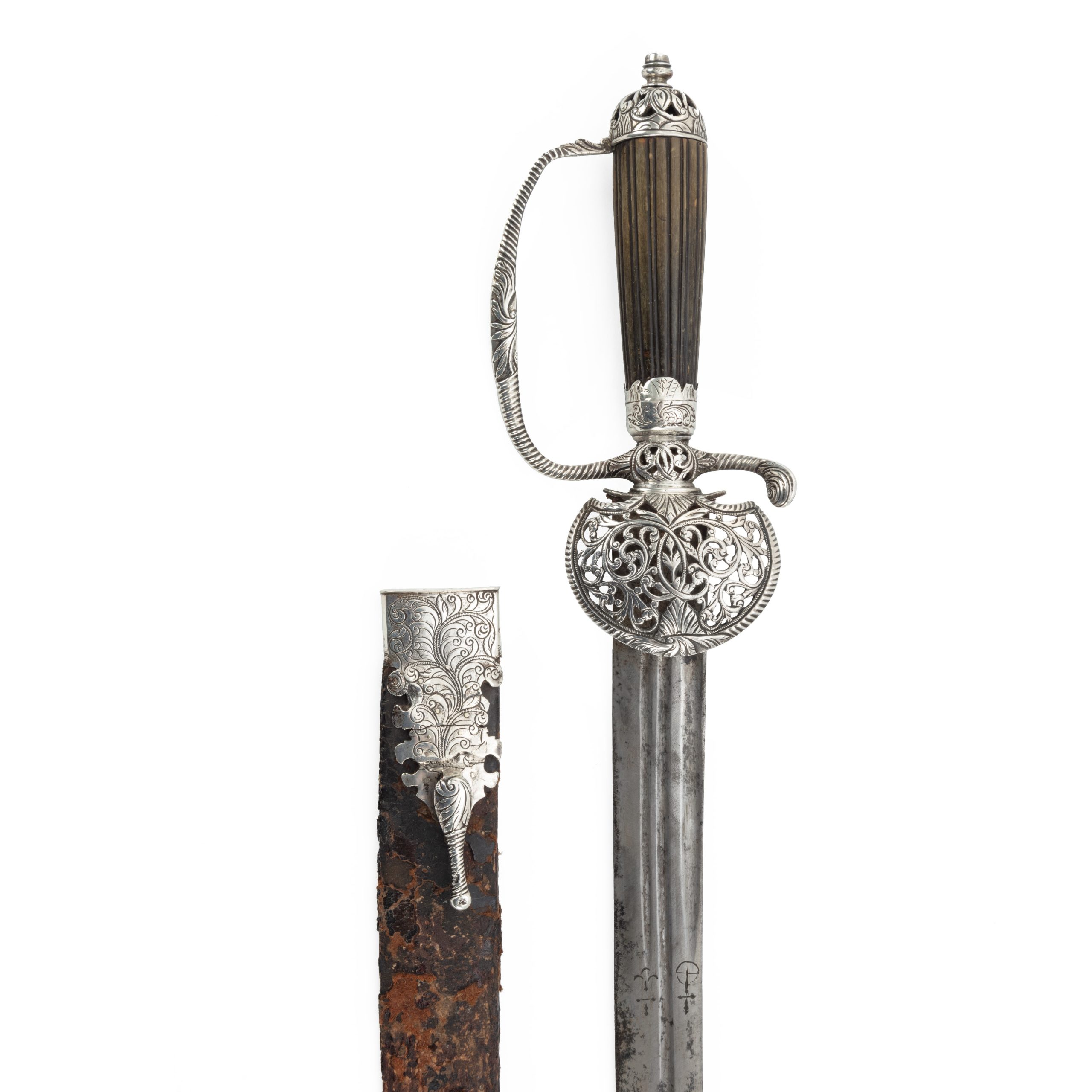 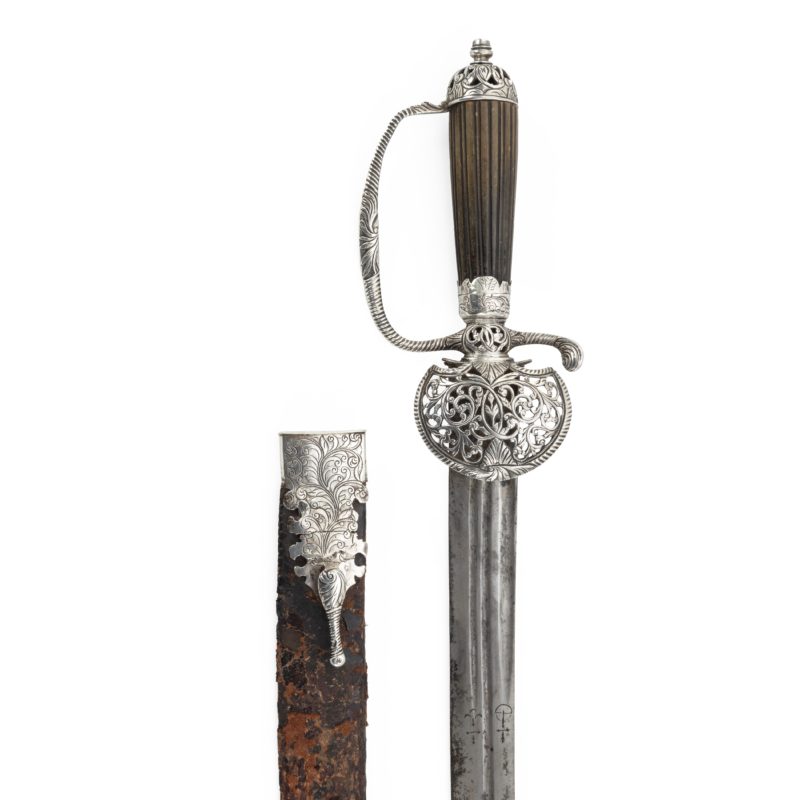 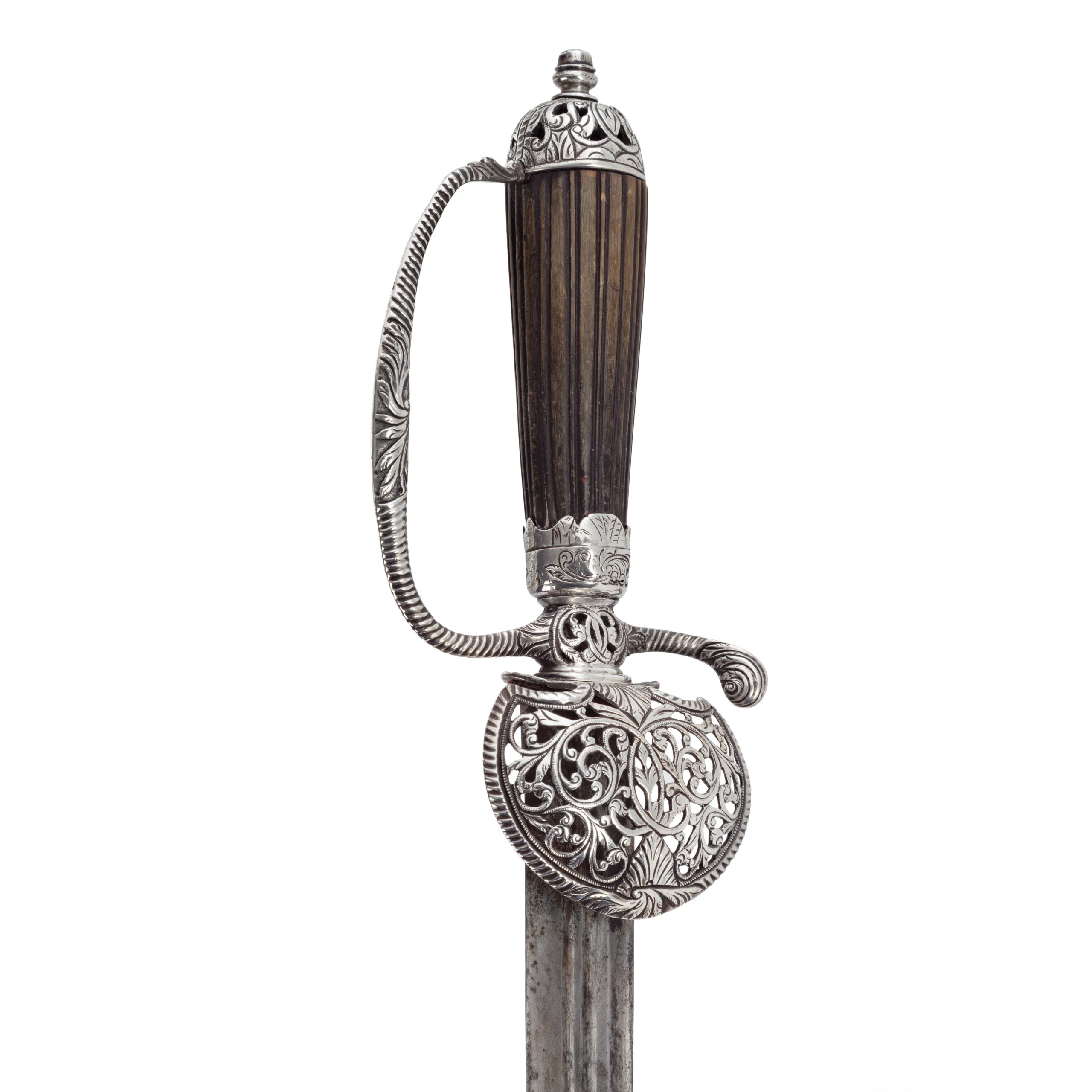 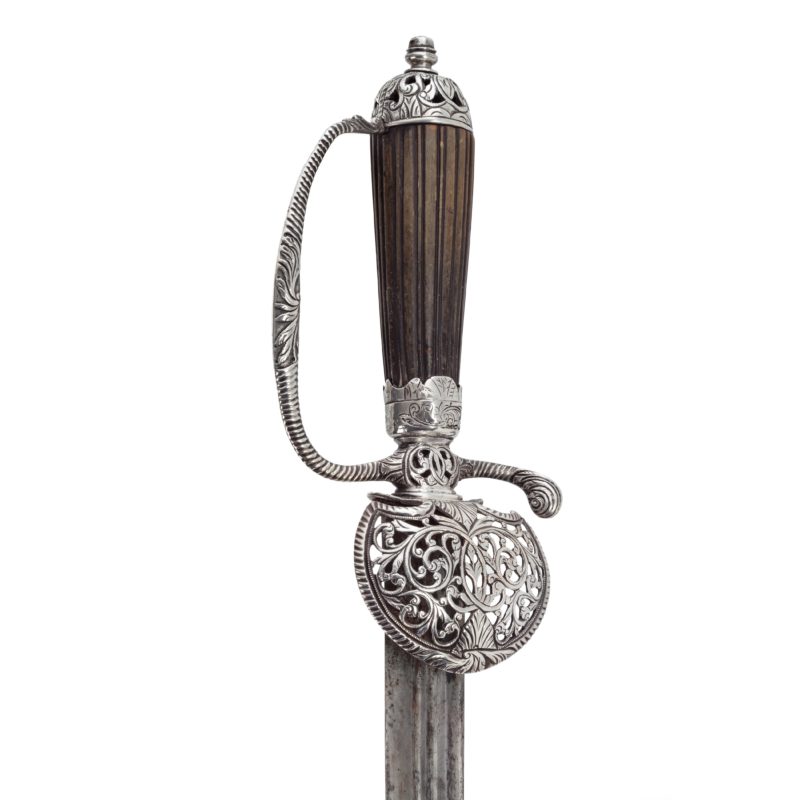 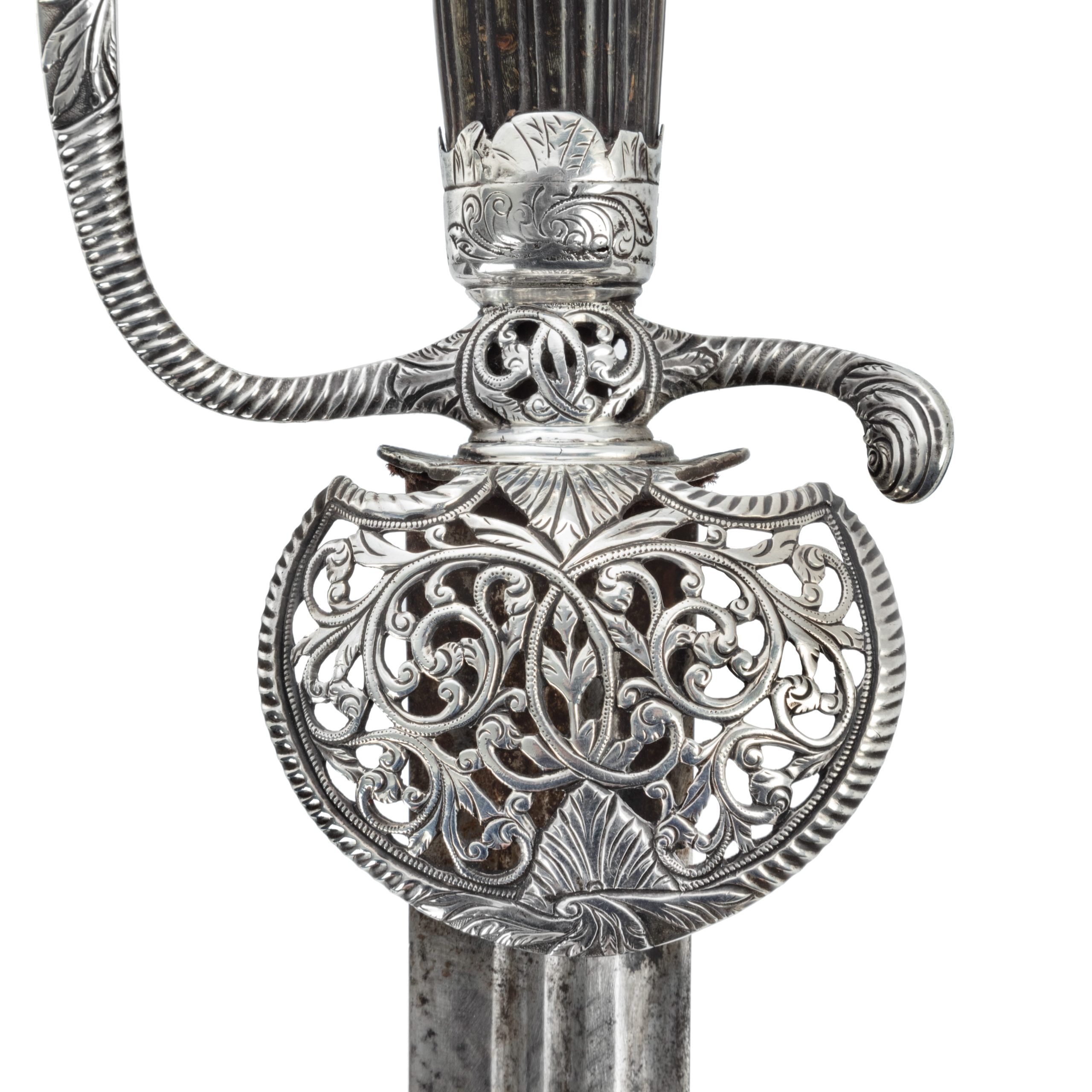 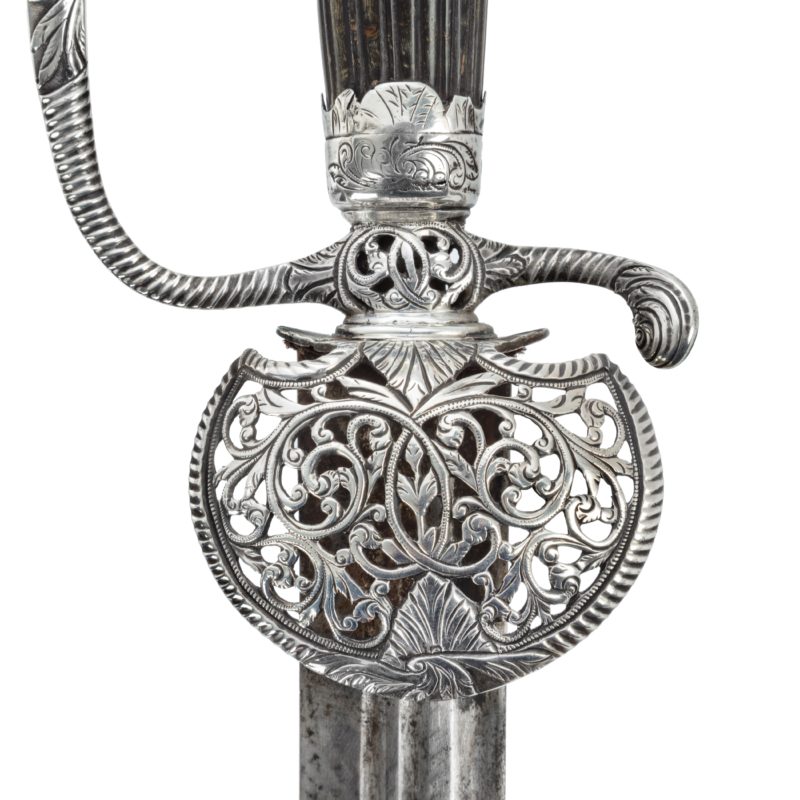 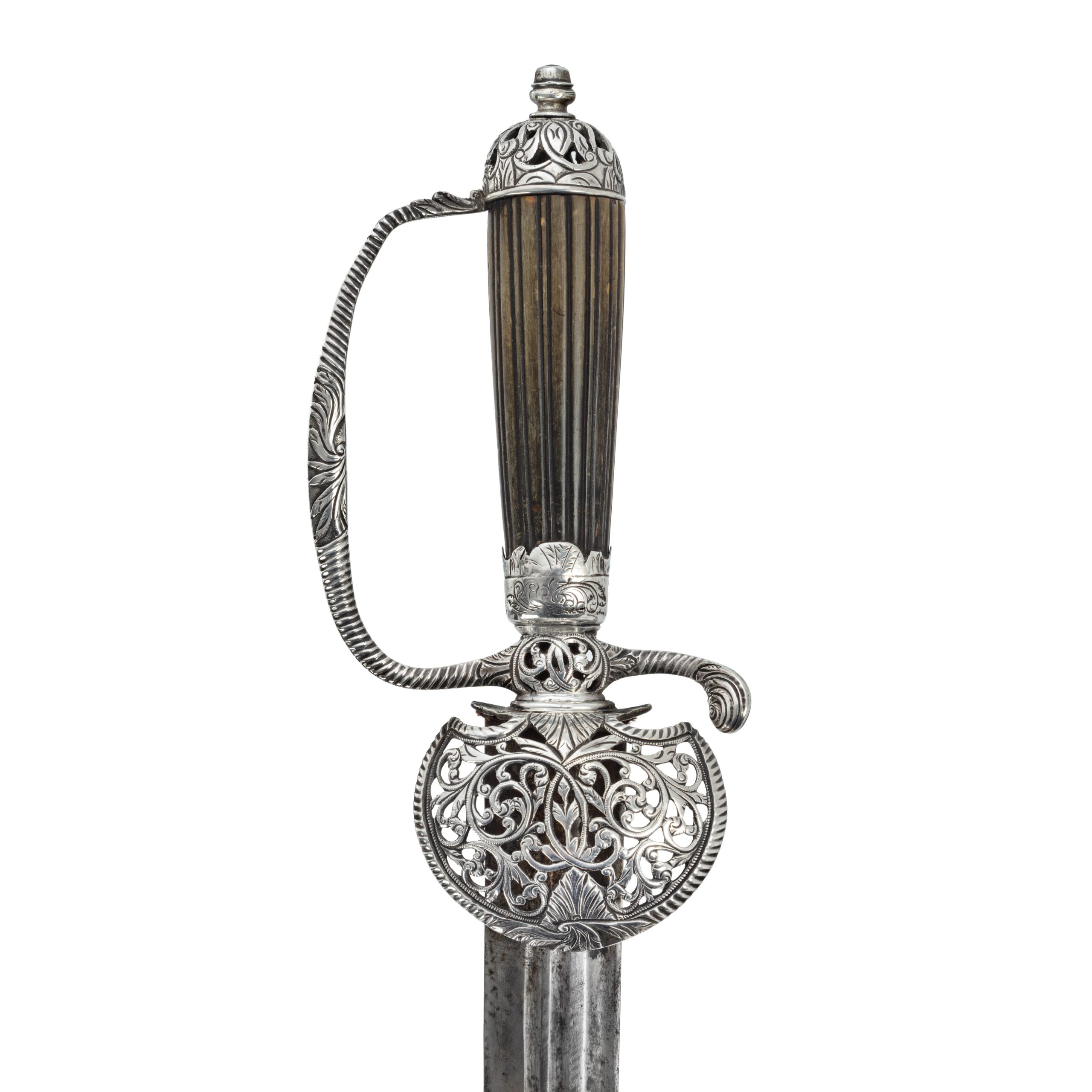 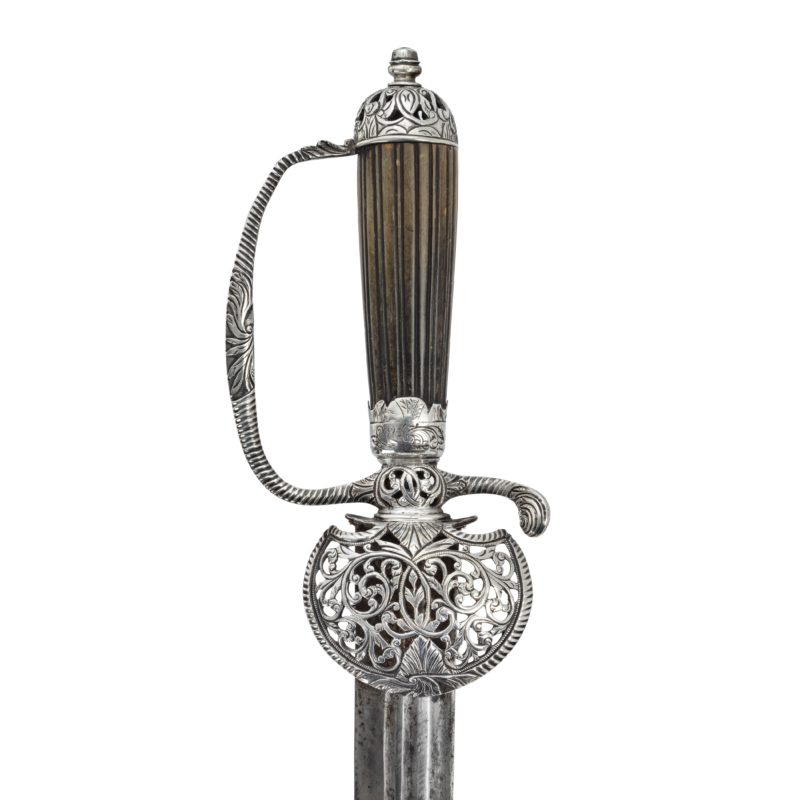 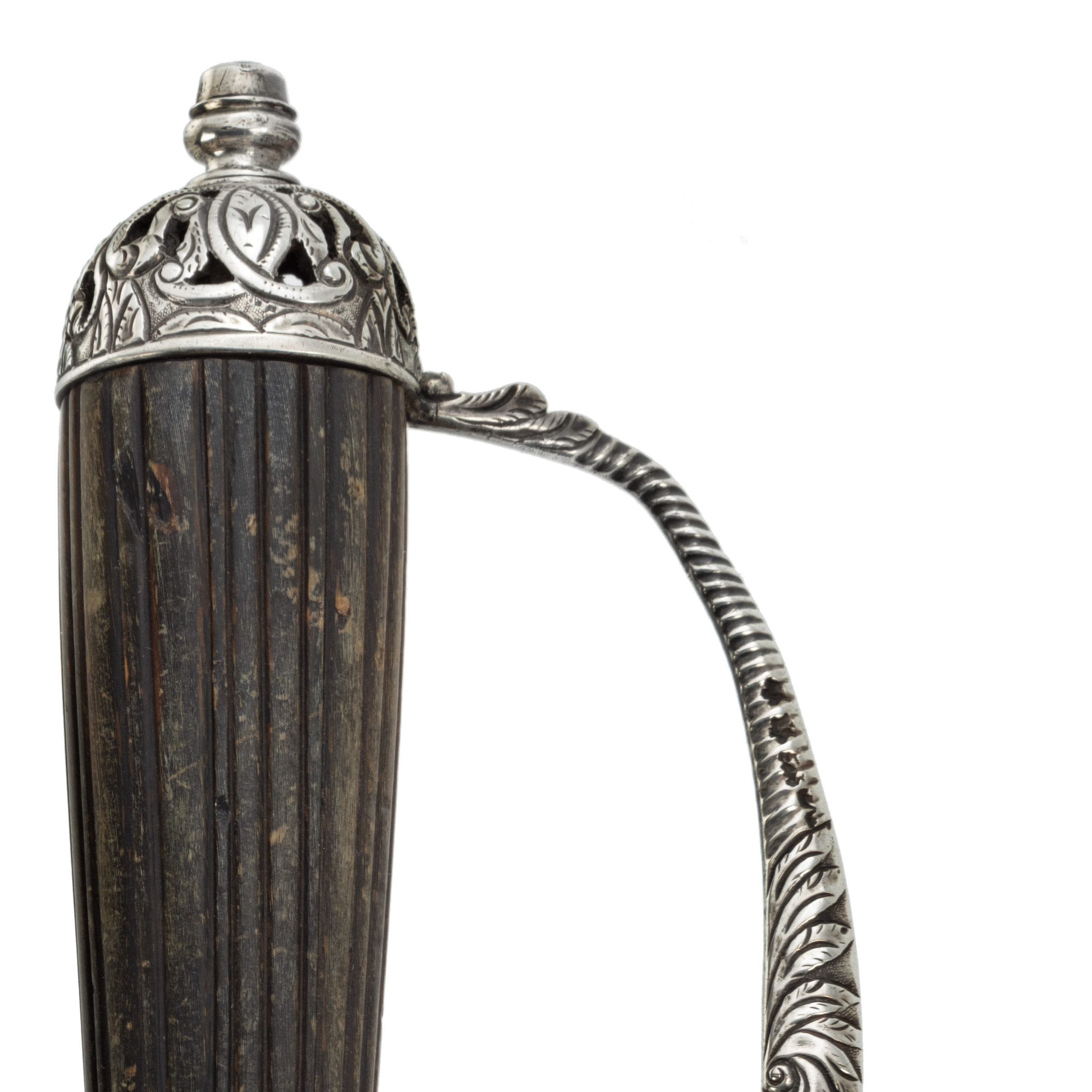 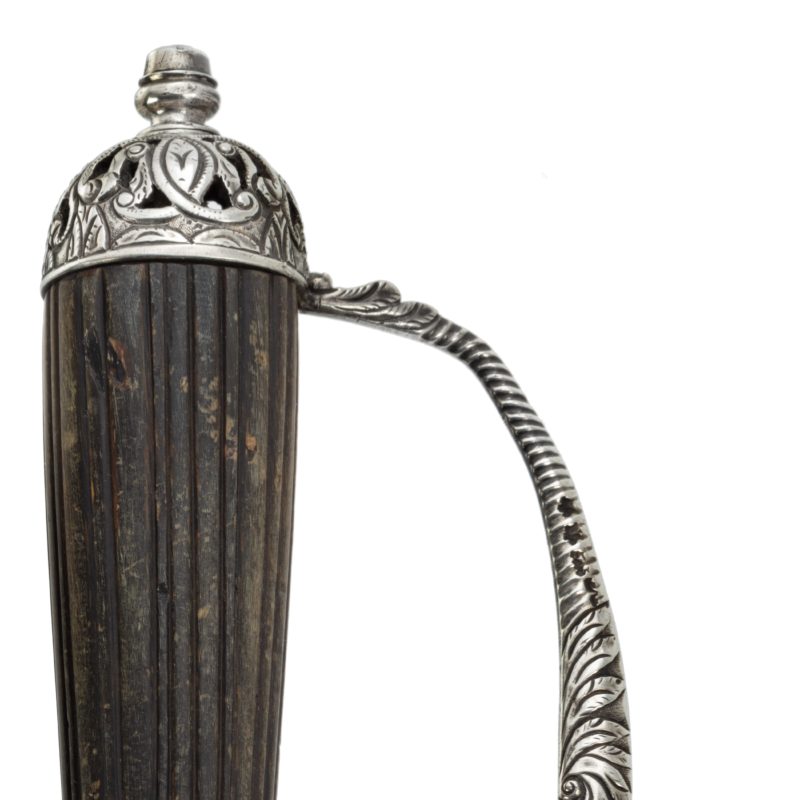 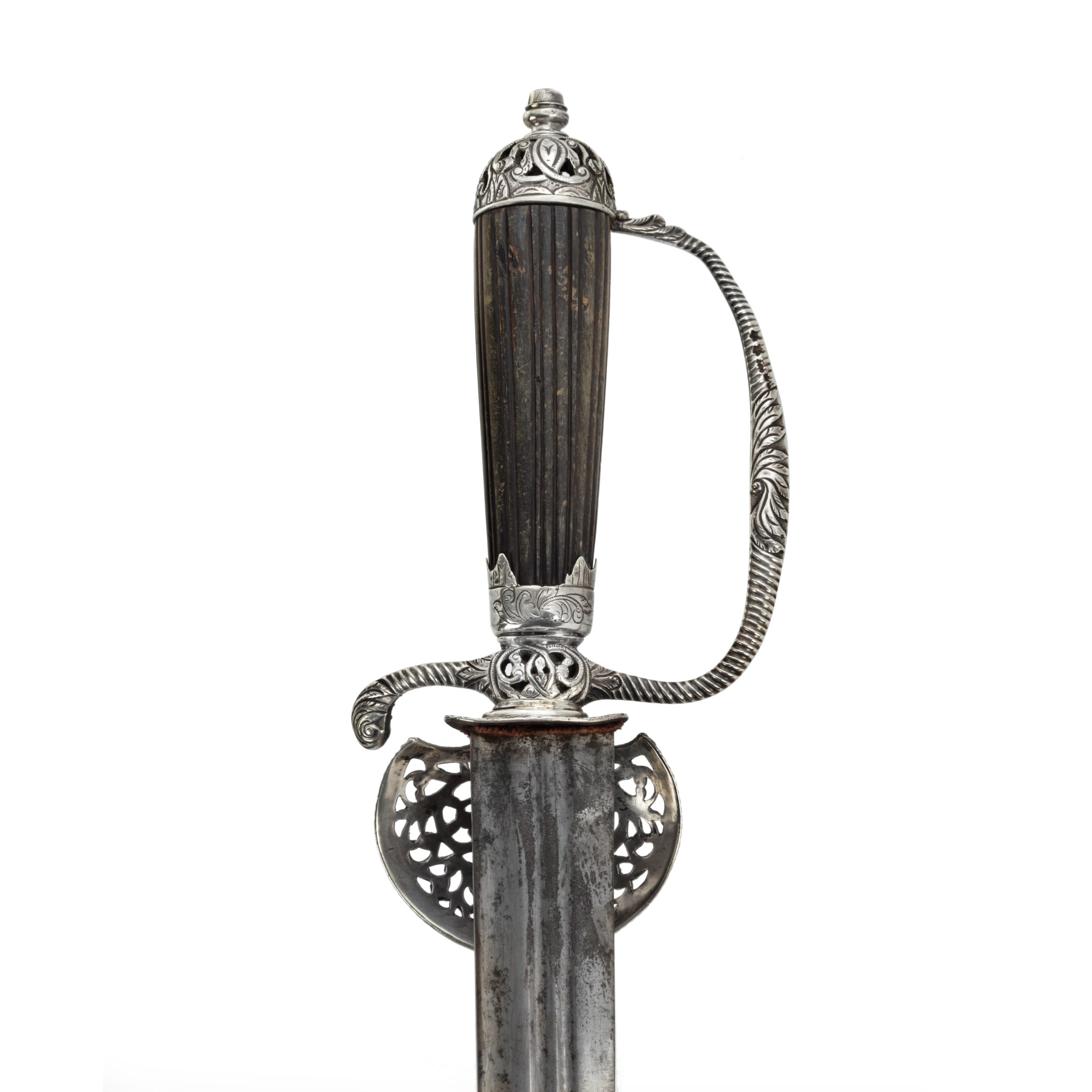 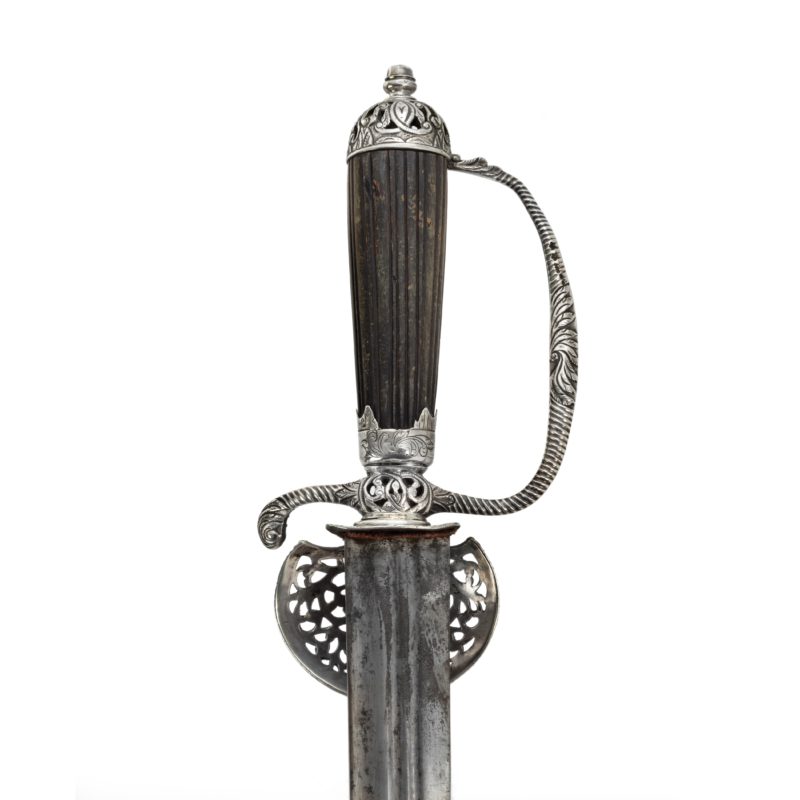 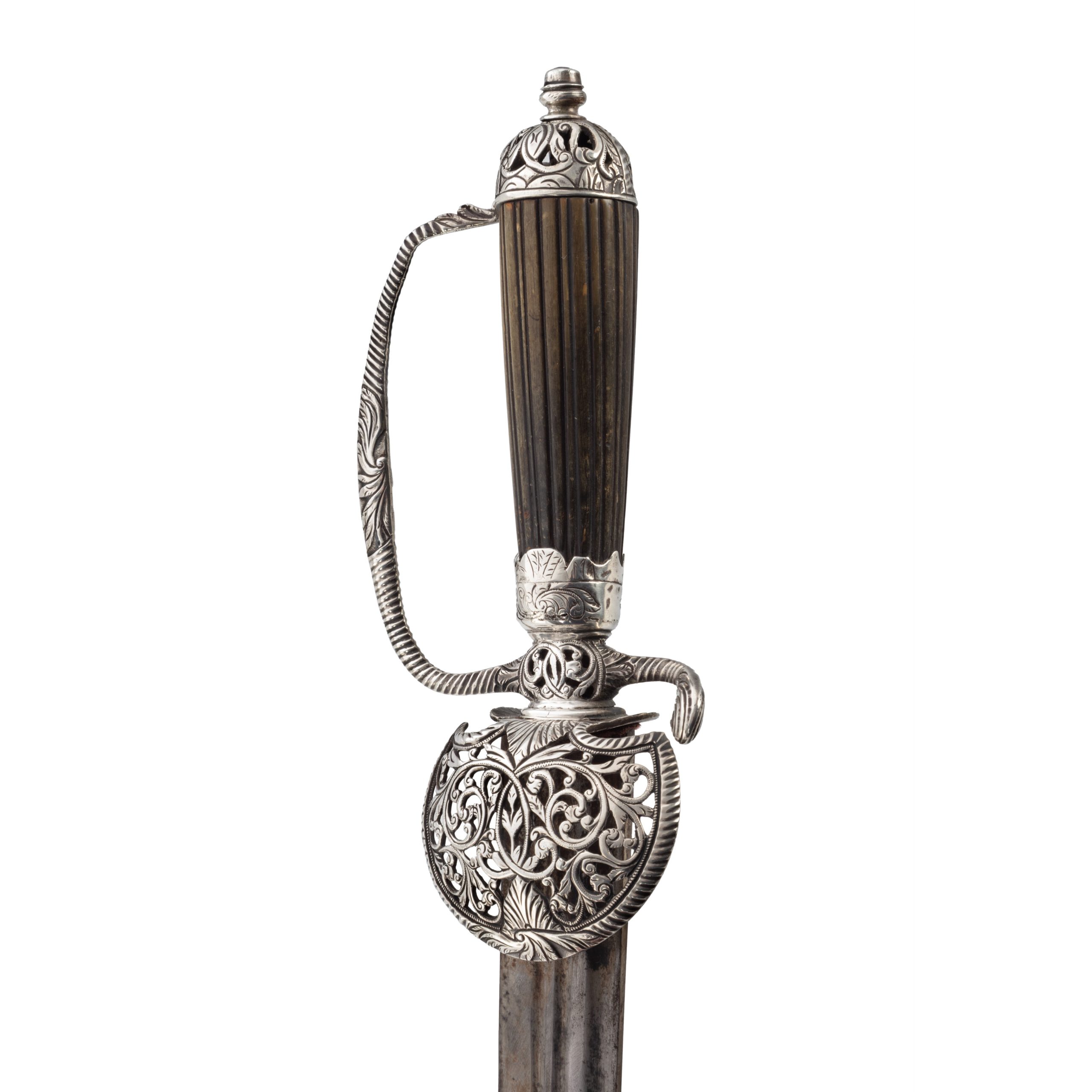 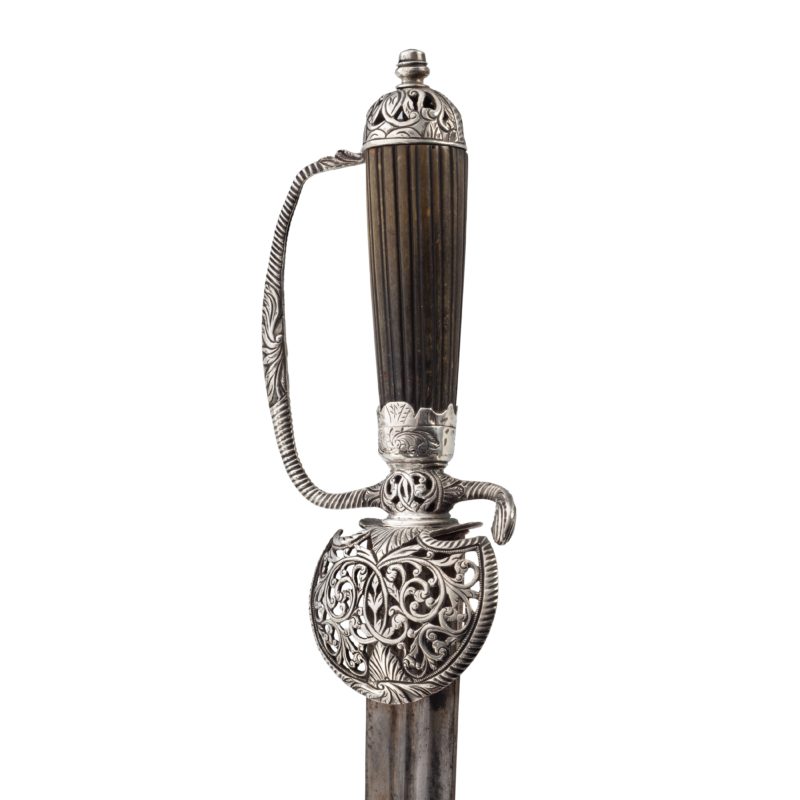 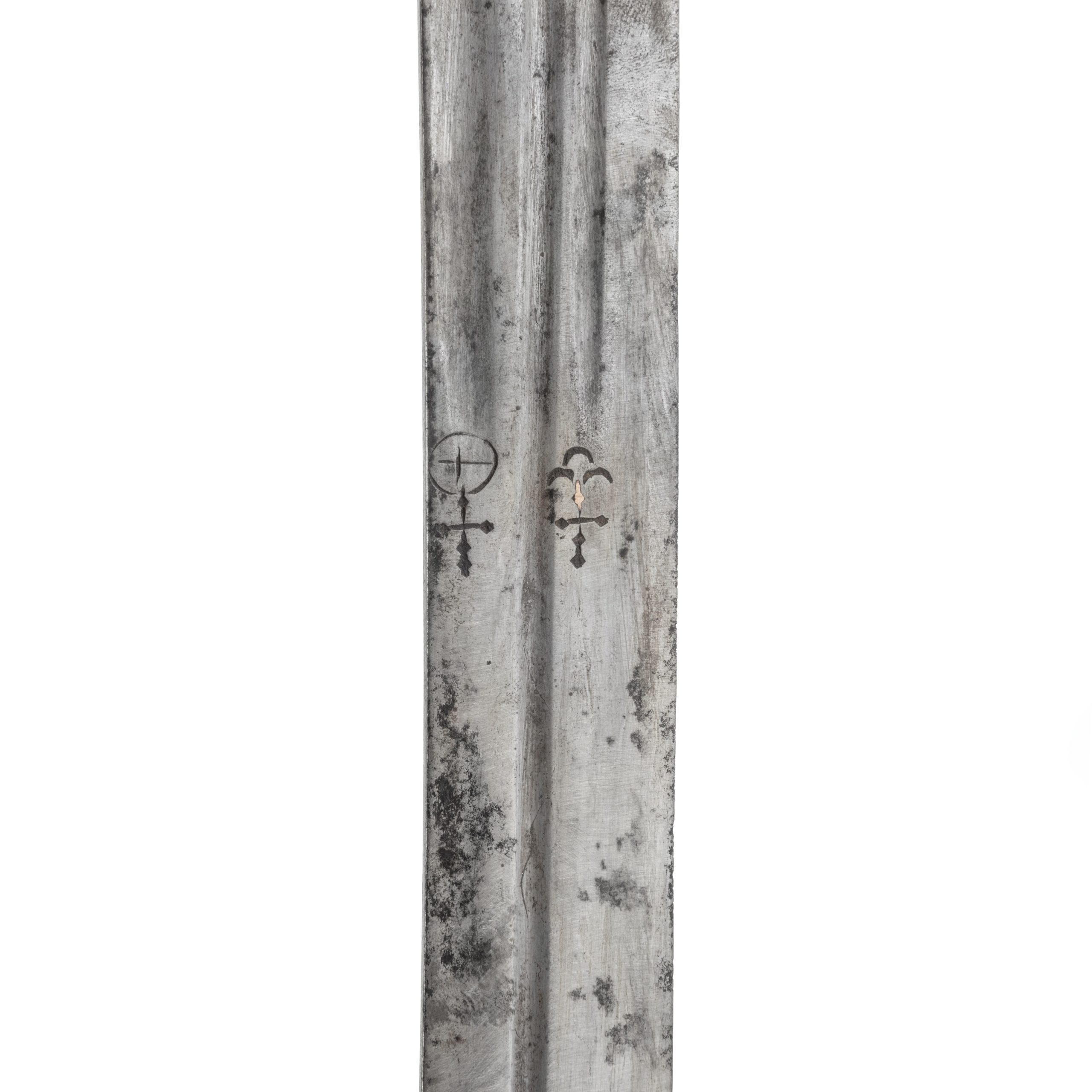 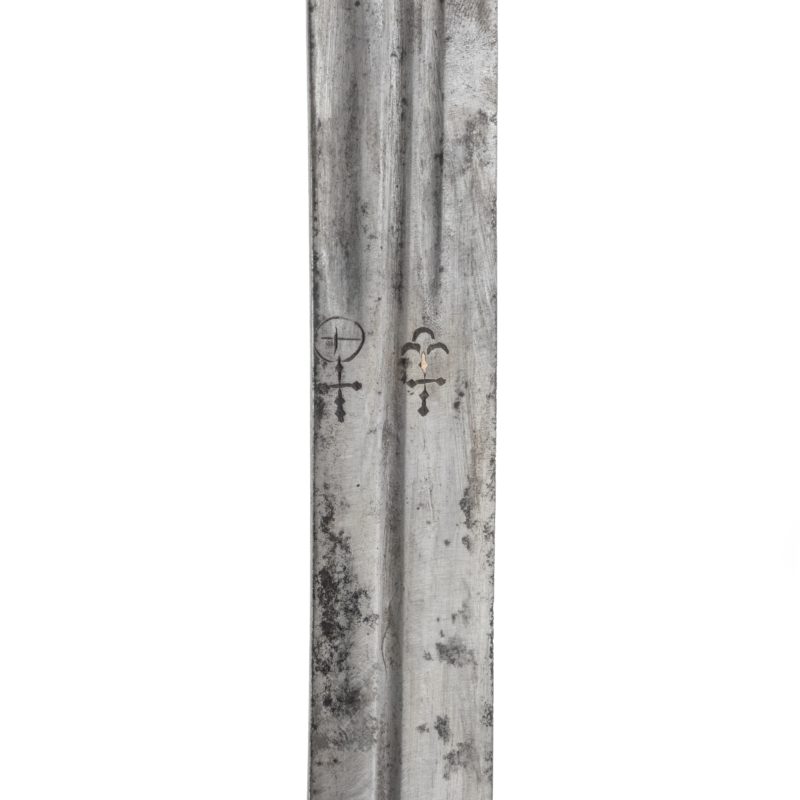 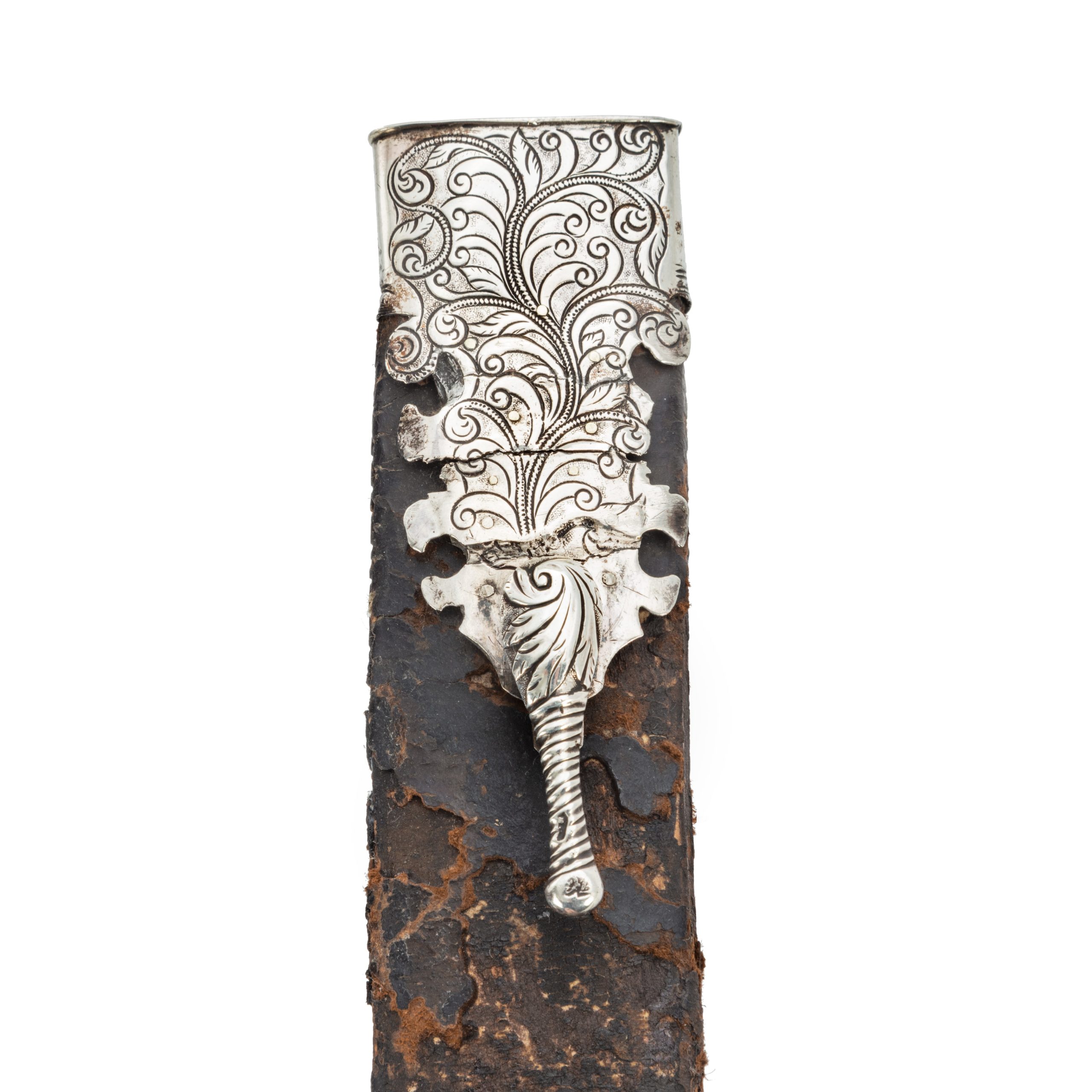 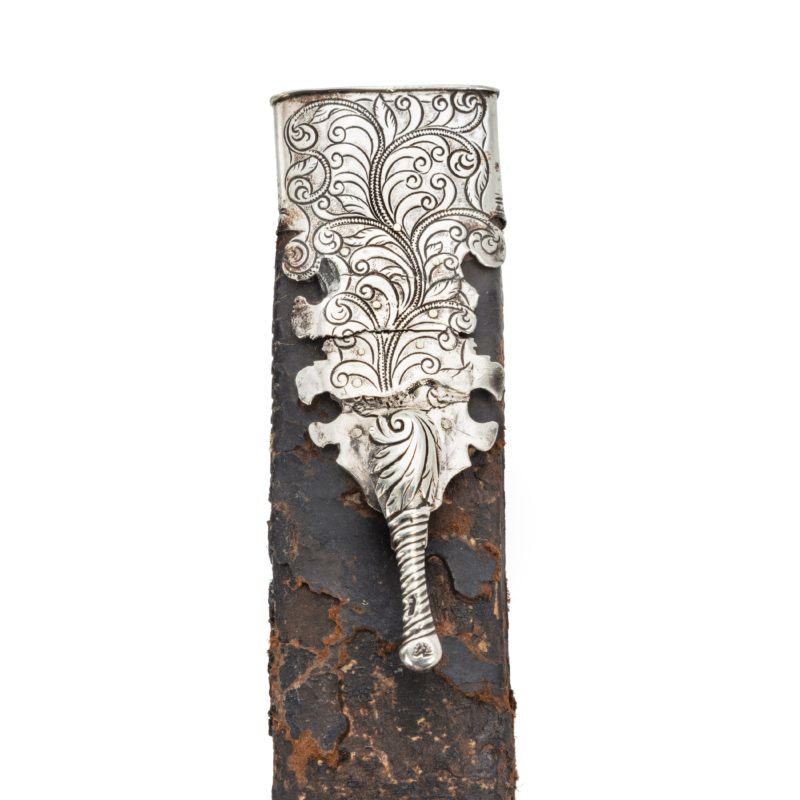 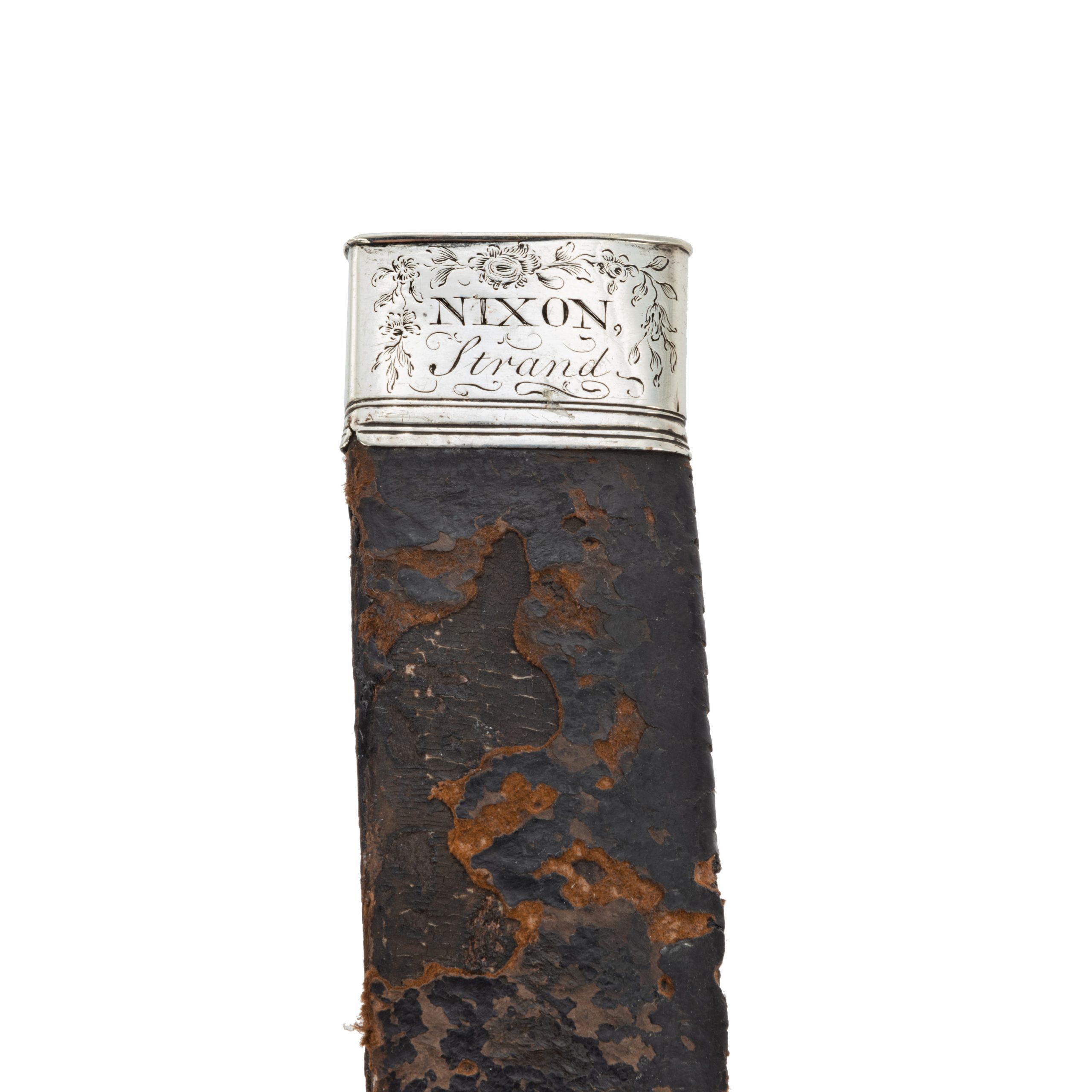 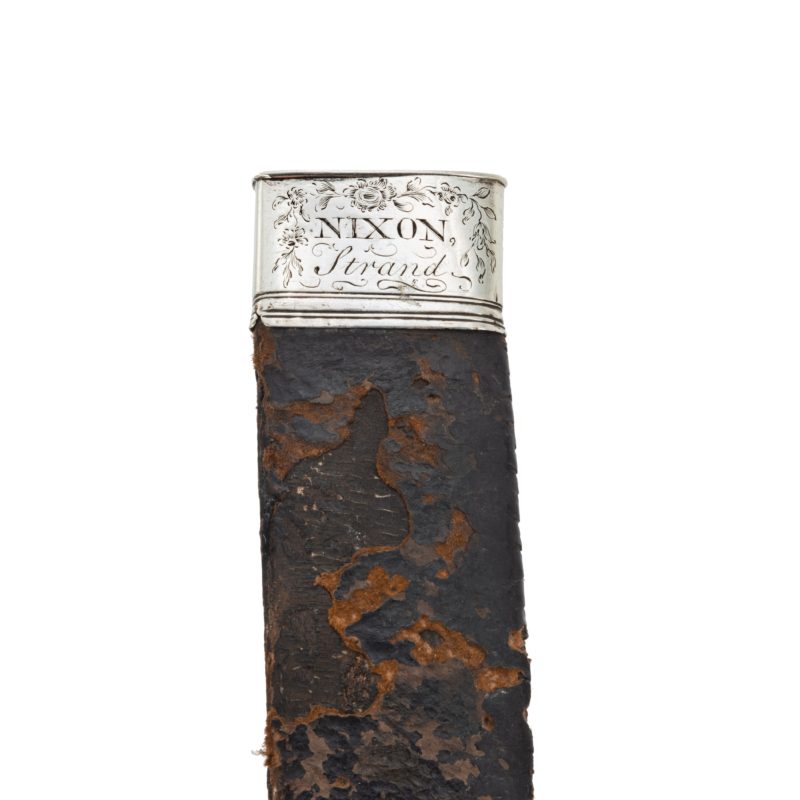 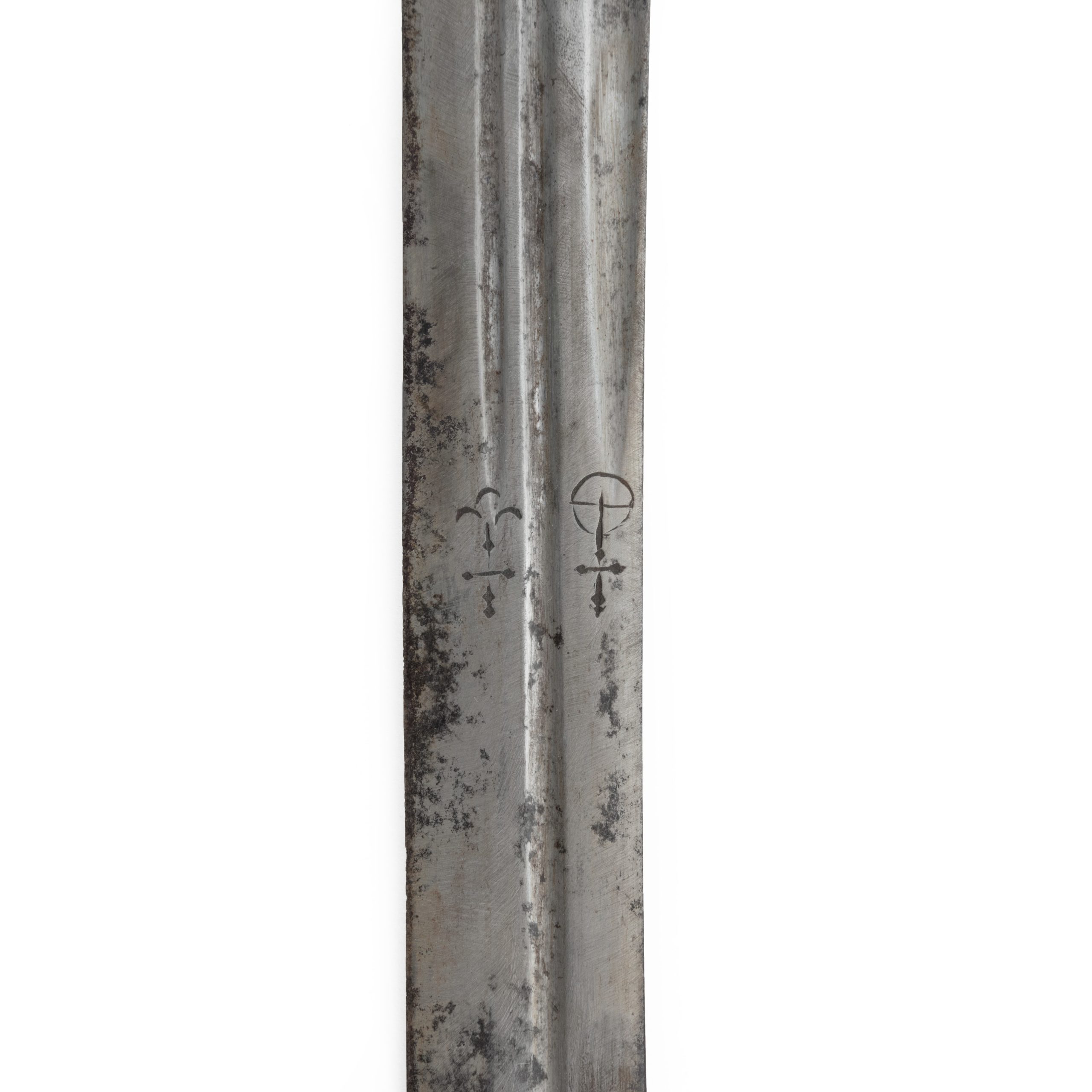 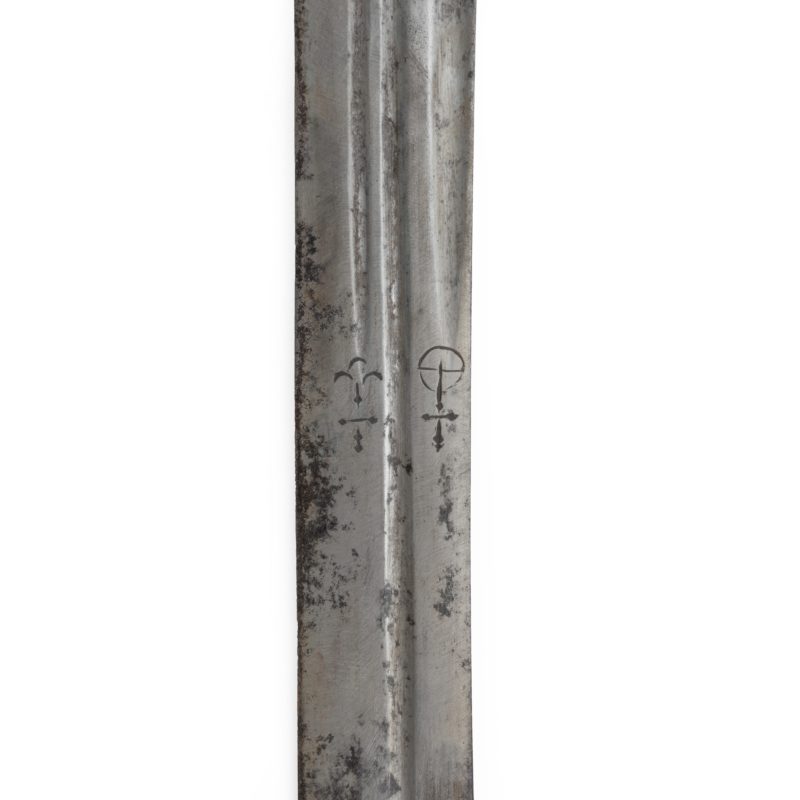 Admiral Lord Nelson’s silver hanger sword This 17th-century single edge, steel blade bears faint armourer marks of a fleur and imperial orb. It is mounted into a later silver hilt and scabbard (hallmarked London 1752) and signed Nixon, Strand. The guard is pierced and chased with scrollwork and foliate decoration and with the cypher CC, which is repeated on the quillon and pommel. The leather scabbard is worn and has the tip missing.

Commander W.E.May, R.N. & P.G.W. Annis, ‘The Galfridus Walpole – Suckling sword’, in, ‘Swords for Sea Service, National Maritime Museum, Greenwich, London’ 1970, vol. I, pp.103-105, The history of this sword is contradictory and confusing. In 1904, Horatio, third Earl Nelson (1823-1913) identified this sword as having been ‘given by the then Captain Nelson of the Agamemnon to William Maurice Suckling, R.N. 1796, when he was returning home on the paying off of the Agamemnon’. He describes it as ‘a most suitable wedding present for a Suckling as Wooton was full of Stuart relics’. The Earl had discovered at Trafalgar House in Wiltshire – the property granted to the Nelson family by the Government after the Battle of Trafalgar – a manuscript in the hand of Hilare, second Countess Nelson (1791-1857), wife of Admiral Lord Nelson’s elder brother William, first Earl Nelson, relating the story behind the royal gift. The countess’s document was either a transcript or the original version of a story which was circulated in the British press in January 1823. It described how Cardinal Henry Stuart of York (1725-1807), brother of ‘Bonnie’ Prince Charles Edward Stuart, the Young Pretender, was forced to flee, destitute, from the armies of Napoleon Bonaparte. Meanwhile Agamemnon was cruising off the Italian coast and Nelson ‘forgetting all those antipathies called up by the name of Stuart, and the Cardinal being an heir-presumptive to the British Crown, determined to assist the last of the Stuarts. He went onshore himself and invited him on board his ship, and found the illustrious unfortunate in rags’. The Cardinal remained on board for seven weeks, witnessing three actions. Six months later Cardinal York’s fortunes were reversed and he welcomed Agamemnon into Genoa ‘with fruit, bread, wine and meat sufficient for several days, and kept open house on shore for all the officers. When taking his final leave, he presented Nelson with a sword or dirk and a cane which the Pretender had used all his life. They were plainly mounted in silver, and highly valued by Nelson’. Unfortunately, the death of Maurice Suckling in 1820 preceded the 1823 publication of this story so there is no additional corroboration of its veracity from that quarter. Alternatively, Nelson recalled meeting a Father McCormick at the Palazzo Sessa in September 1798. The priest had praised his victory and predicted that the admiral would retake Rome with his ships. This was either James McCormick (died 1818) or his brother Michael McCormick (died 1820), Irish priests who had attended as confessors at the death beds of both Cardinal York’s father, Prince James, the ‘Old Pretender’ in 1766; and of his brother, Prince Charles Edward Stuart, in 1788. It seems likely that Father McCormick had also fled Rome and was visiting the Palazzo Sessa with Cardinal York at the personal invitation of Sir William Hamilton. This offered opportunity for the Cardinal to present the sword to Nelson, although coming from a traitor to the British crown; it was not a gift the admiral would wish to publicise. According to the Cardinal’s biographer, Bernard Kelly: ‘Considering Lord Nelson’s long sojourn in Naples, a stay extending to some twenty months, it is in every way likely that he must have met his titular Sovereign at the Court and in general society many times’. It is suggested that William Nixon may have cut down and remounted, in silver, a broadsword blade once belonging to Prince Charles Edward Stuart and abandoned after the collapse of the 1745 Jacobite rebellion or, as it was stated in 1922: ‘The silversmith Nixon, in 1752, would not have used a second-hand blade for a costly mounting of the highest art unless there was a special value attached to it’. Sir Guy Laking (1875-1919), Keeper of the King’s Armoury at Windsor, was ‘much interested’ by the sword: ‘The name Nixon is familiar to me as a sword cutler of the latter part of the eighteenth century. Several weapons mounted by him are to be seen in the Armoury at Windsor Castle. The blade is considerably earlier than its hilt, and may possibly be of the first half of the seventeenth century’. The orb marks, associated with the cutlers of Solingen, are present on a seventeenth century basket-hilted broadsword in the V&A Museum (M.472-1936) and on a blade dated 1617 in a sword associated with King James I in the Royal Collection (RCIN 67123). William Nixon’s premises were recorded in 1745 as being ‘next the Church, over the sewer, Strand’.

Sim Comfort entirely dismisses this provenance. The French, led by General Bonaparte, invaded Italy in May 1796, and whilst Nelson commanded Agamemnon off the coast of Italy until June 1796, there is no record of his meeting the Cardinal, who remained at his residence at Frascati until he fled south to Naples following the capture of Rome in February 1798. The Cardinal remained in Naples for several months until fleeing
again in December 1798 ahead of the French advance. Although there is no documented record of a meeting with Nelson, the Cardinal knew Hamilton and is known to have publicly congratulated him on the British victory before Nelson’s arrival in the city. Comfort refers to this as the Galfridus Walpole sword. Captain Galfridus Walpole (1683-1726) was a noted naval officer from the Suckling (maternal) side of Nelson’s family. The Suckling family of Roos Hall, Suffolk, preserved ‘a silver hilted hunting sword, hall-marked 1752, but with a cut down German blade’, until 2003. ‘This is believed to be the Galfridus Walpole sword’. How this sword then passed down the family to Captain Maurice Suckling (1726-28) is unclear as there is no mention of it in his will. Whatever its antecedents, three facts are not in dispute. This sword belonged to Admiral Lord Horatio Nelson, was subsequently given to his nephew Maurice William Suckling, a lieutenant in the Royal Navy who had served in Agamemnon, and remained in that family until sold by Sotheby’s in 2003.