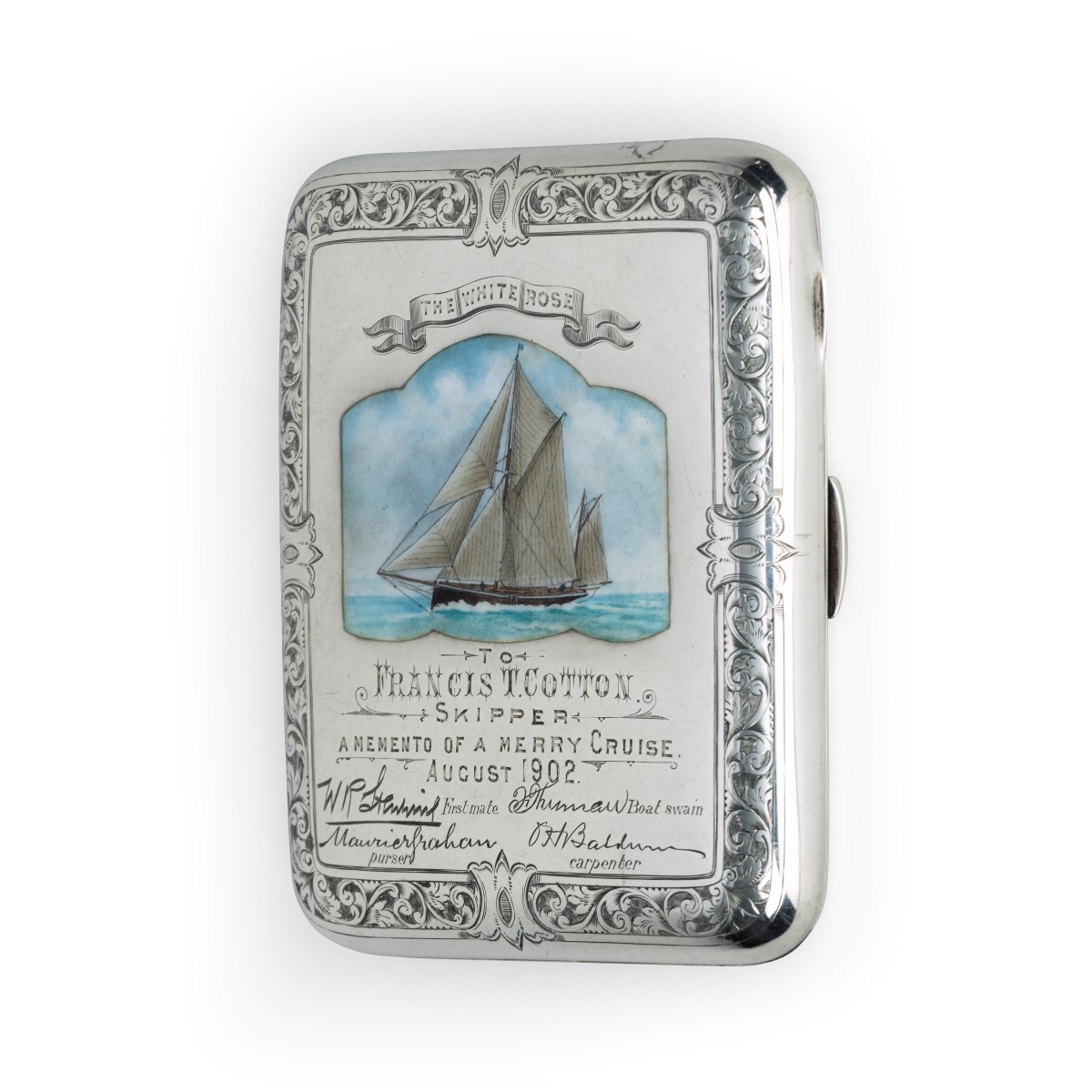 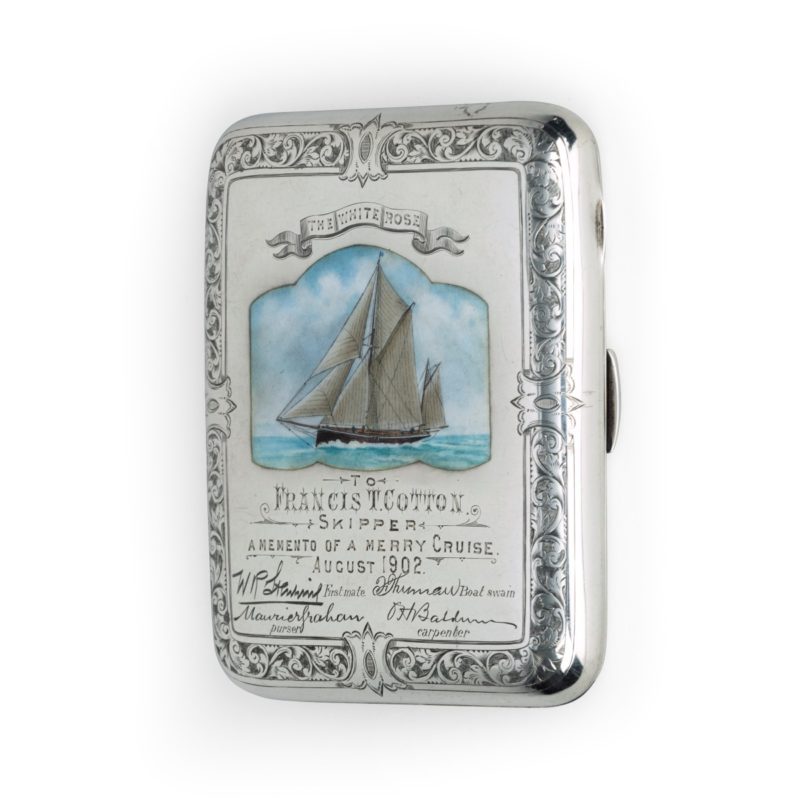 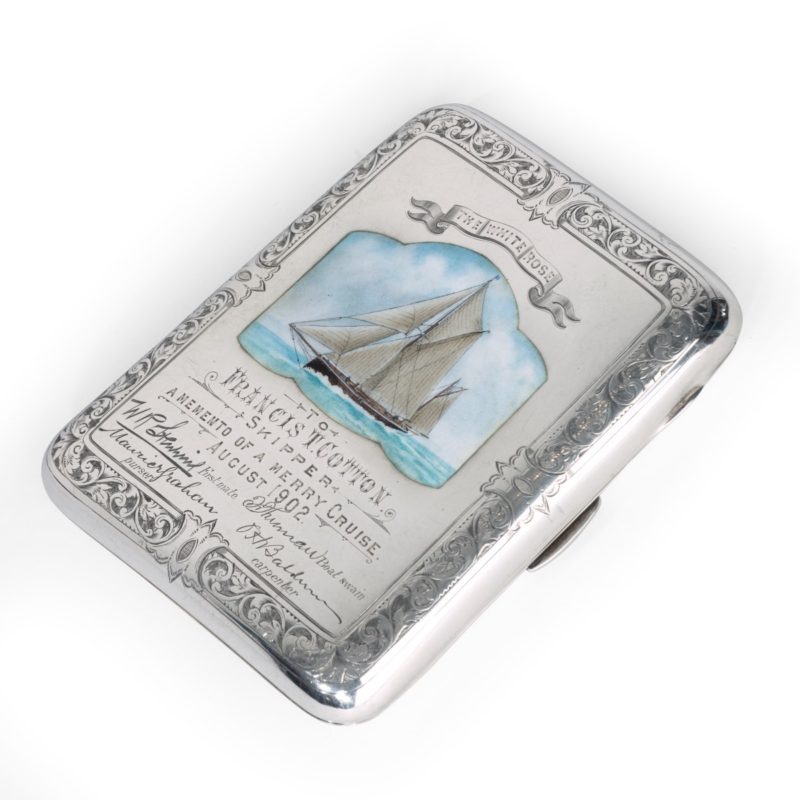 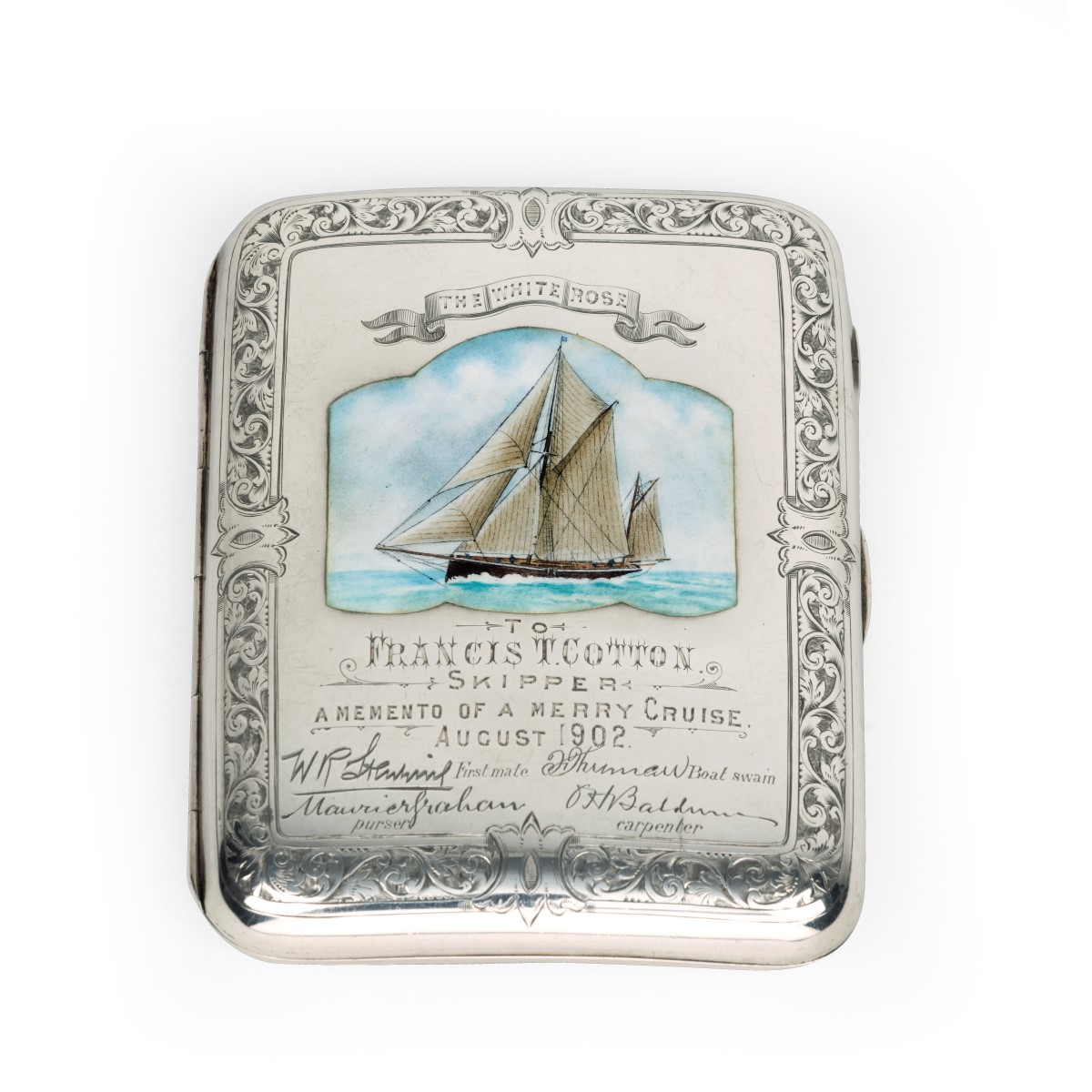 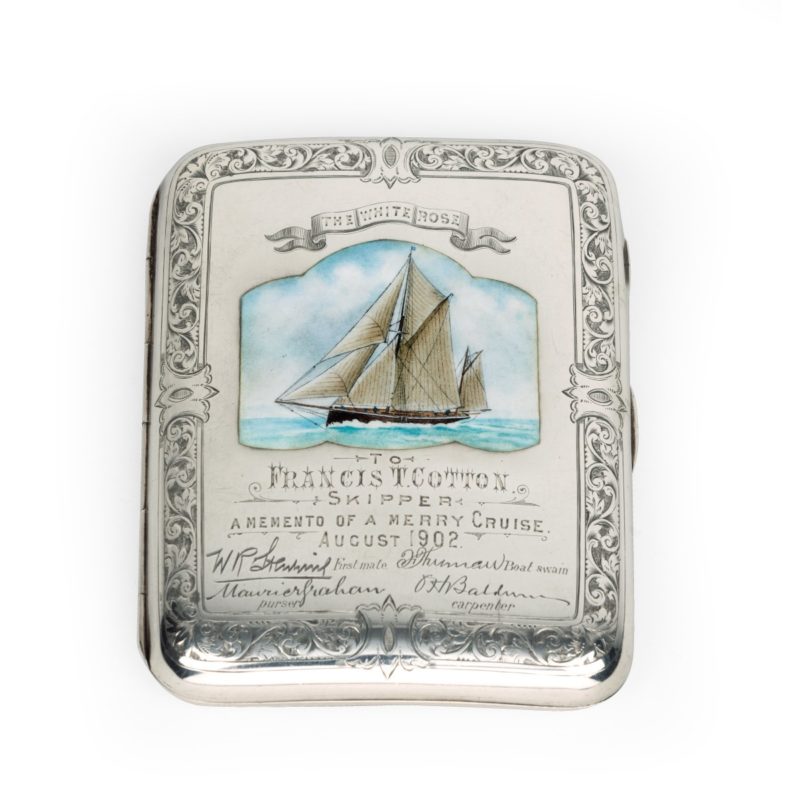 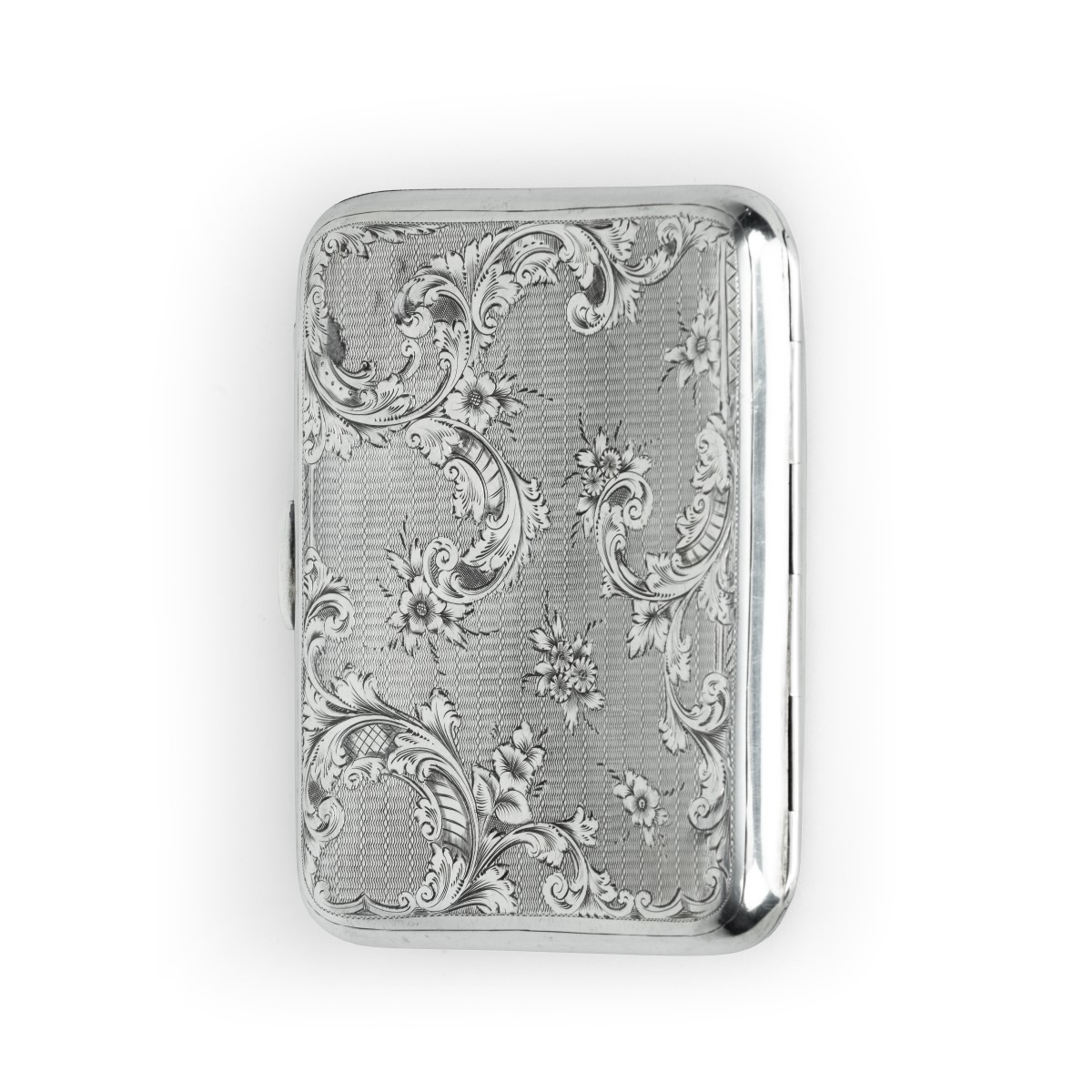 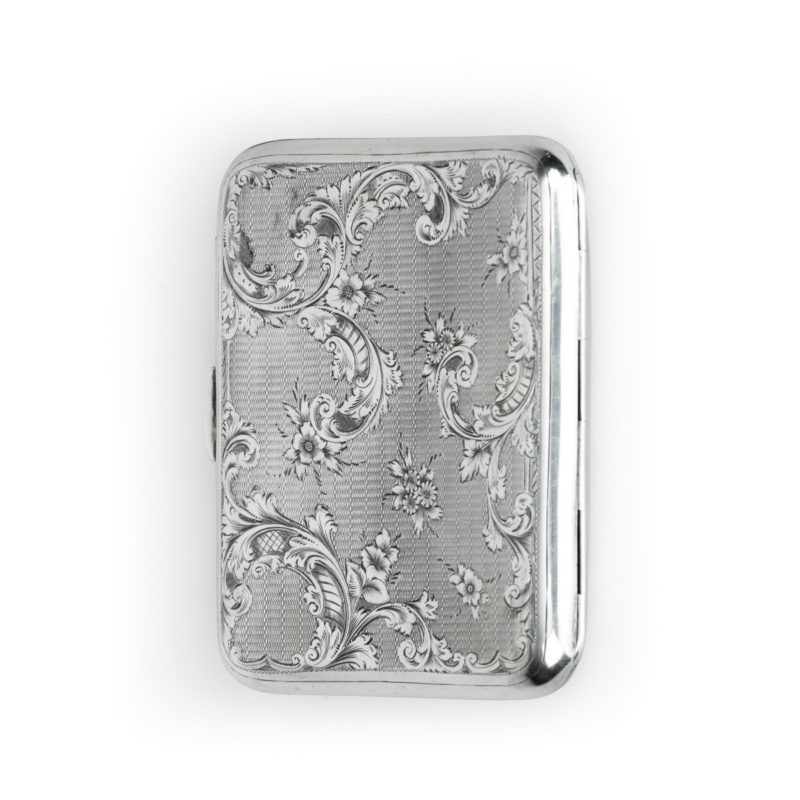 An Edwardian silver and enamel cheroot case belonging to Francis T. Cotton and showing ‘The White Rose’, the central enamel cartouche with an image of a ketch in full sail, a banner above incised ‘The White Rose’ and a personalised inscription ‘To Francis T. Cotton, Skipper, A memento of a merry cruise, August 1902’, with the signatures of the ‘first mate, boatswain, purser’ and ‘carpenter’ beneath, surrounded by a scroll border.  Marks for Colen Hewer, Cheshire, Birmingham, 1902.

The White Rose was a 50 ton yawl fitted out at Kingsend in Dublin in 1891.  It is believed that she was purchased at this stage by William Francis Cotton, a one-time gas examiner in Dublin who worked his way up to becoming the secretary and manager of The Alliance Consumers Gas Company (the forerunner to Dublin Gas).  He also designed an enormous gas lighting fixture for the Mansion House in Dublin and was in charge of procuring his company’s new headquarters in 1882.

In later life, William became an Alderman and later High Sheriff and then MP for South Dublin in 1911.  He died in 1917.  The Cotton family were famous for their hospitality and The White Rose was an essential part of their entertaining.  One of William’s sons, christened Thomas Francis Cotton, is believed to have gone by the name Francis T. Cotton so it is highly likely that this beautiful cheroot case, made to commemorate a ‘merry’ cruise, was from his friends who had designated themselves ‘first mate’,’ boatswain’, ‘purser’ and ‘carpenter’.  The family sent the yacht for refitting again in 1905 and it was still owned by William Francis Cotton in 1908.