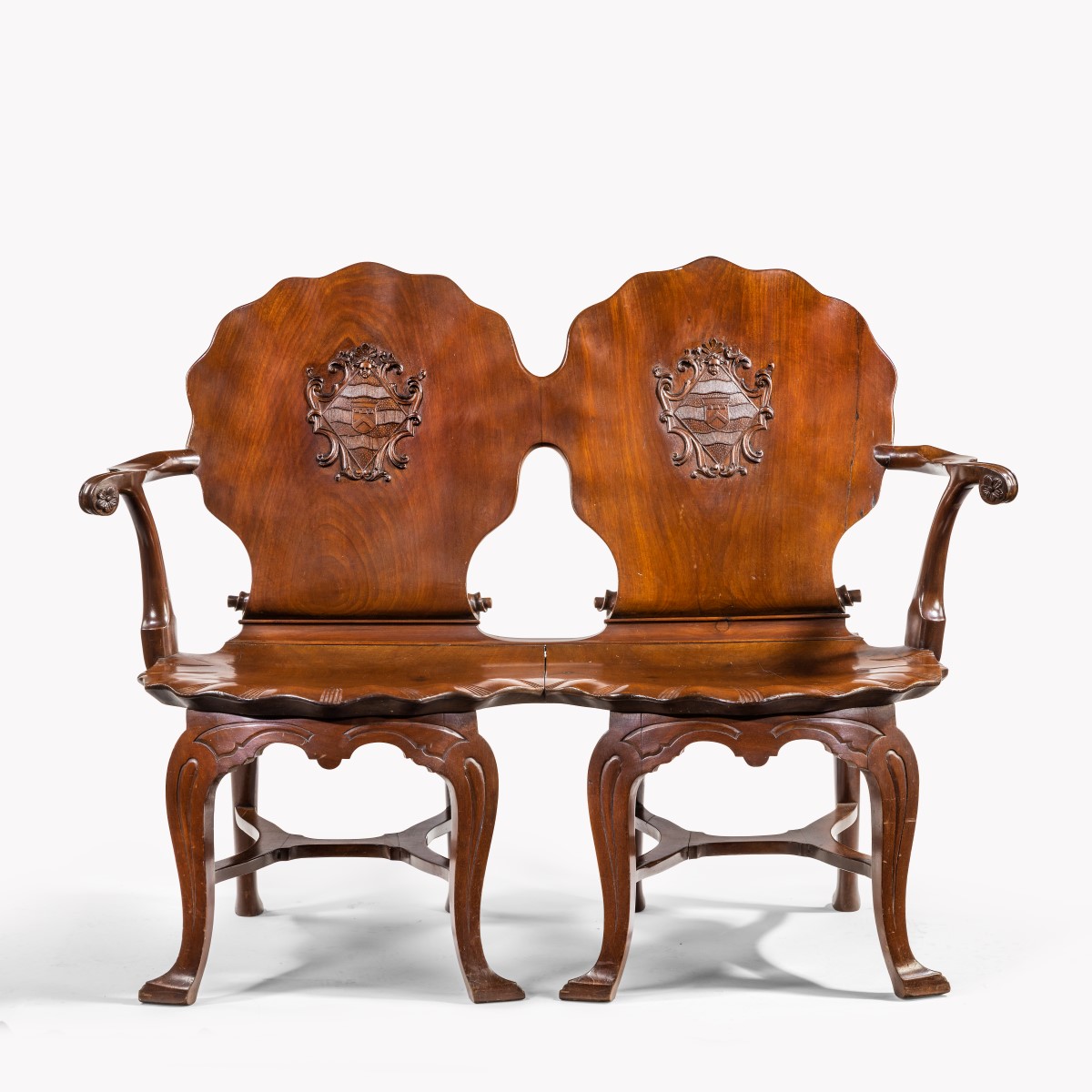 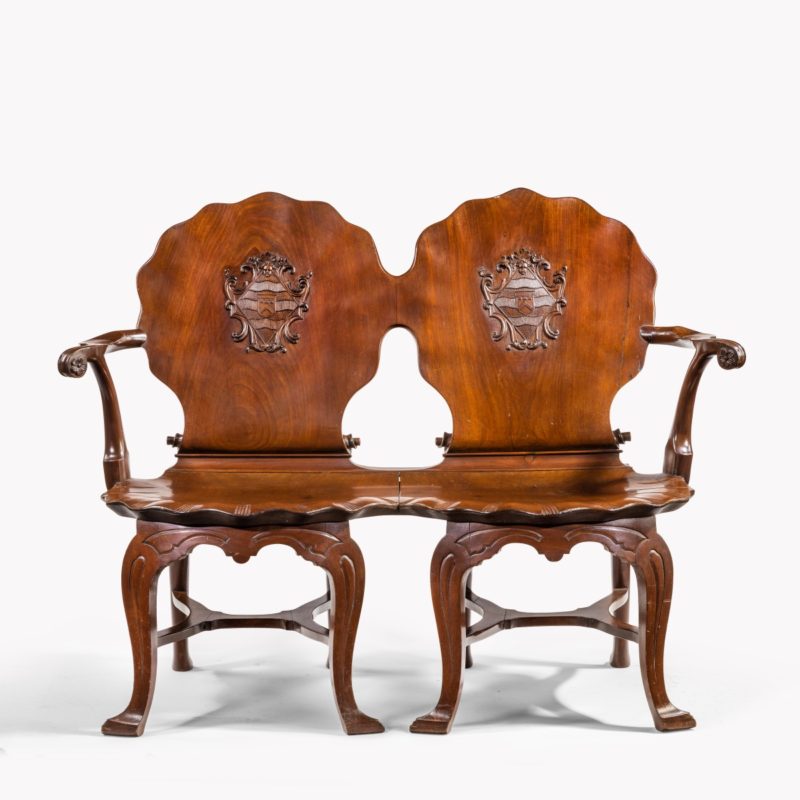 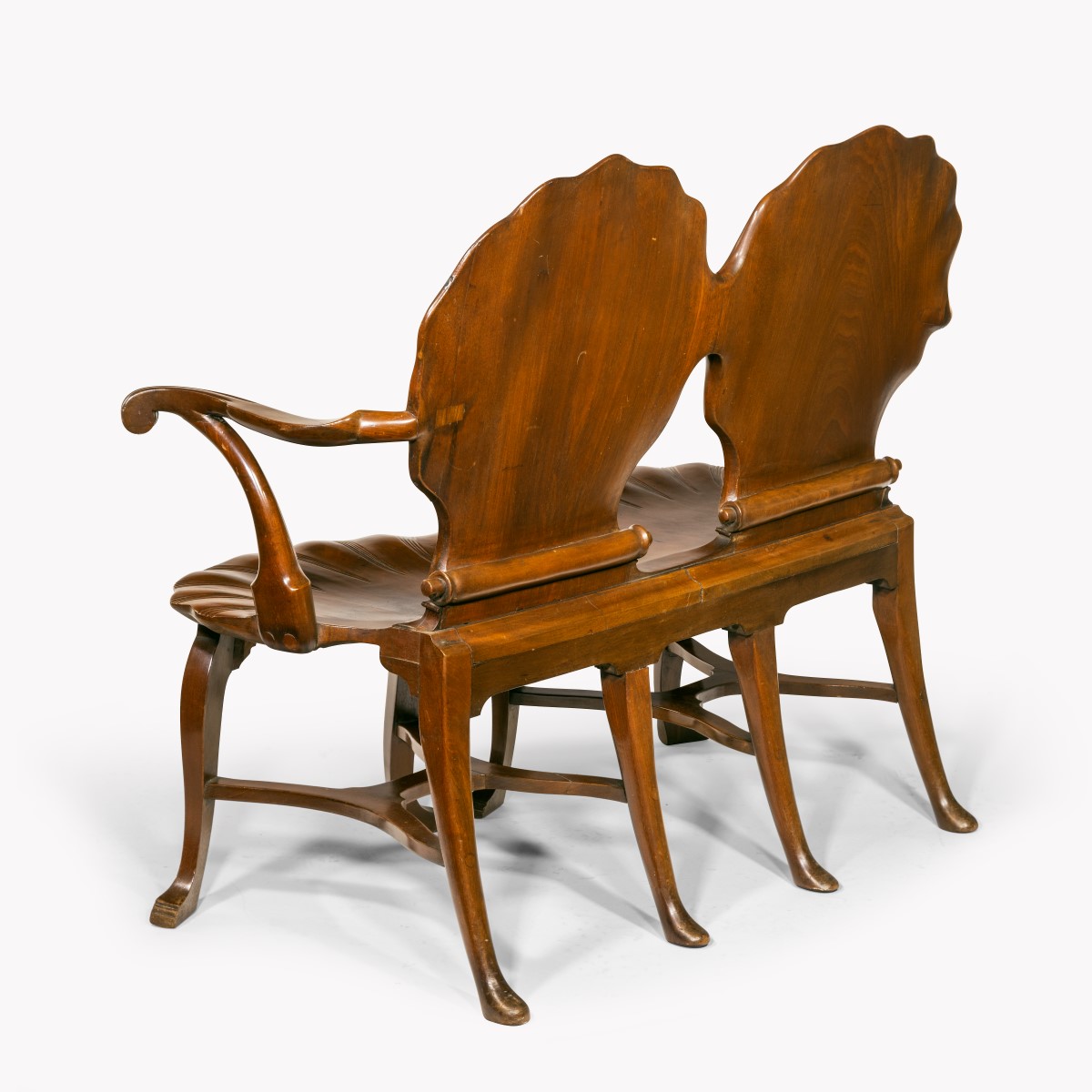 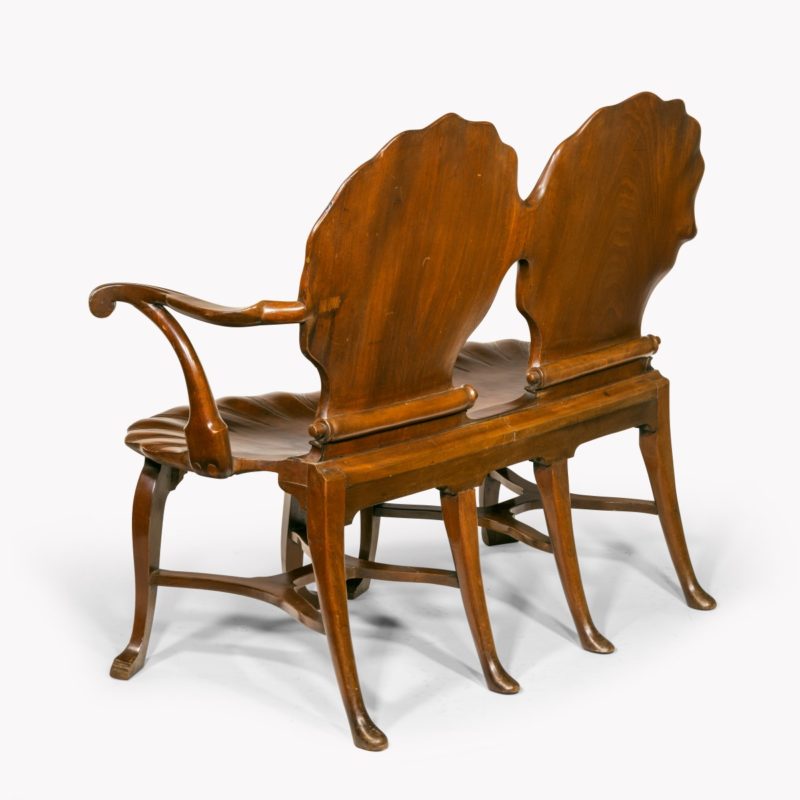 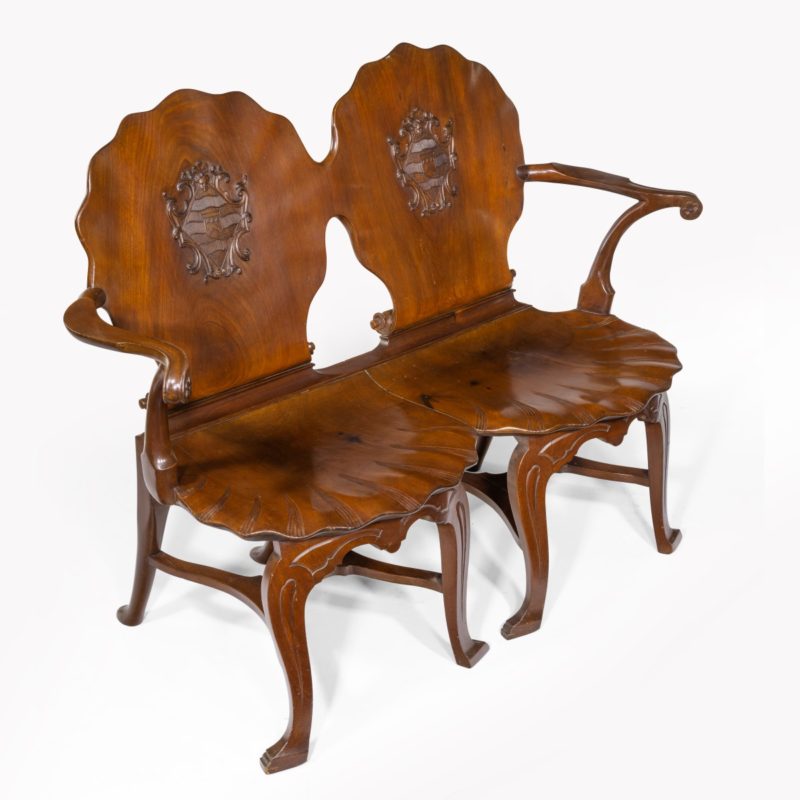 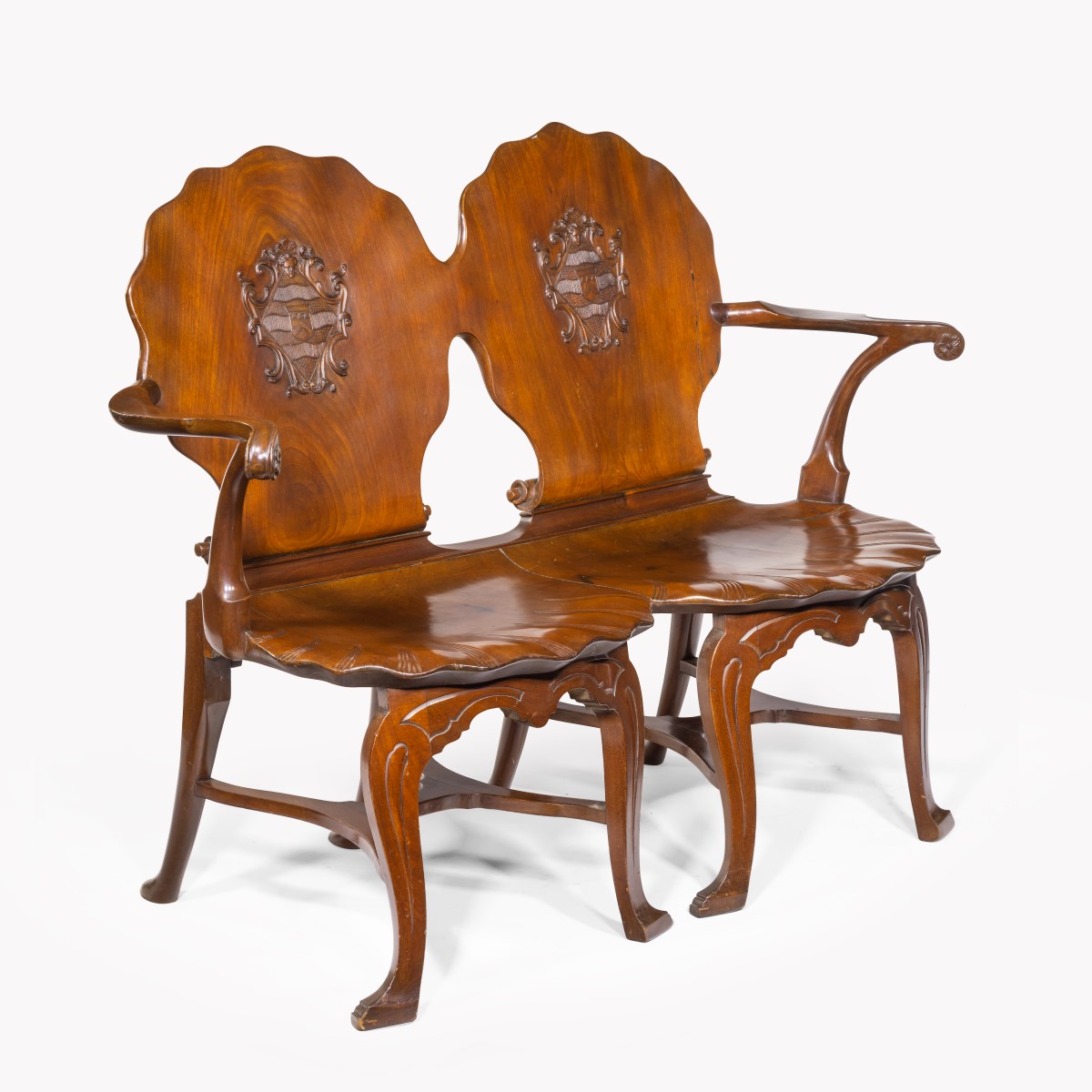 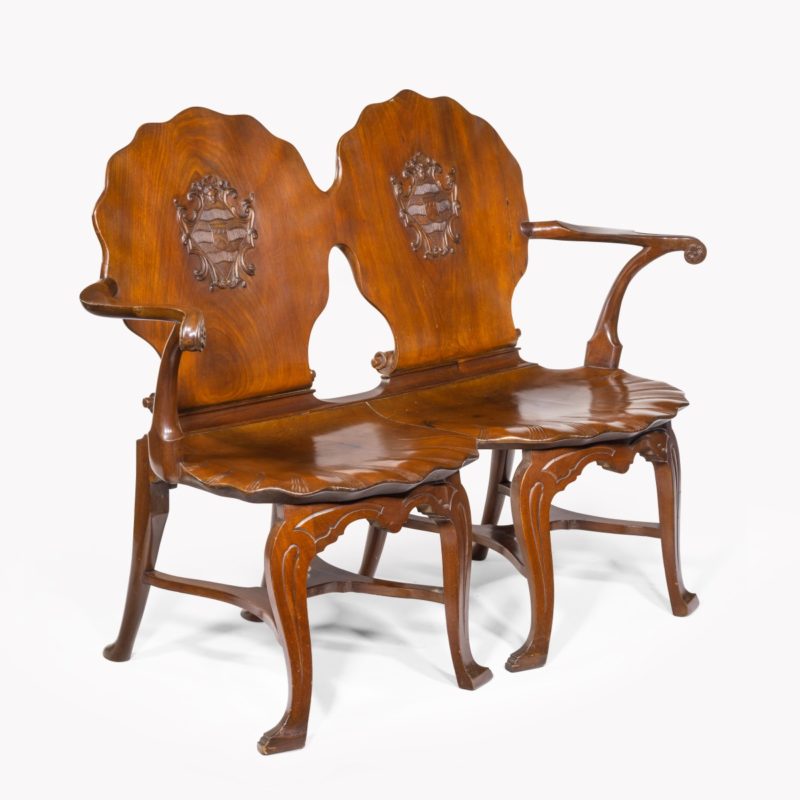 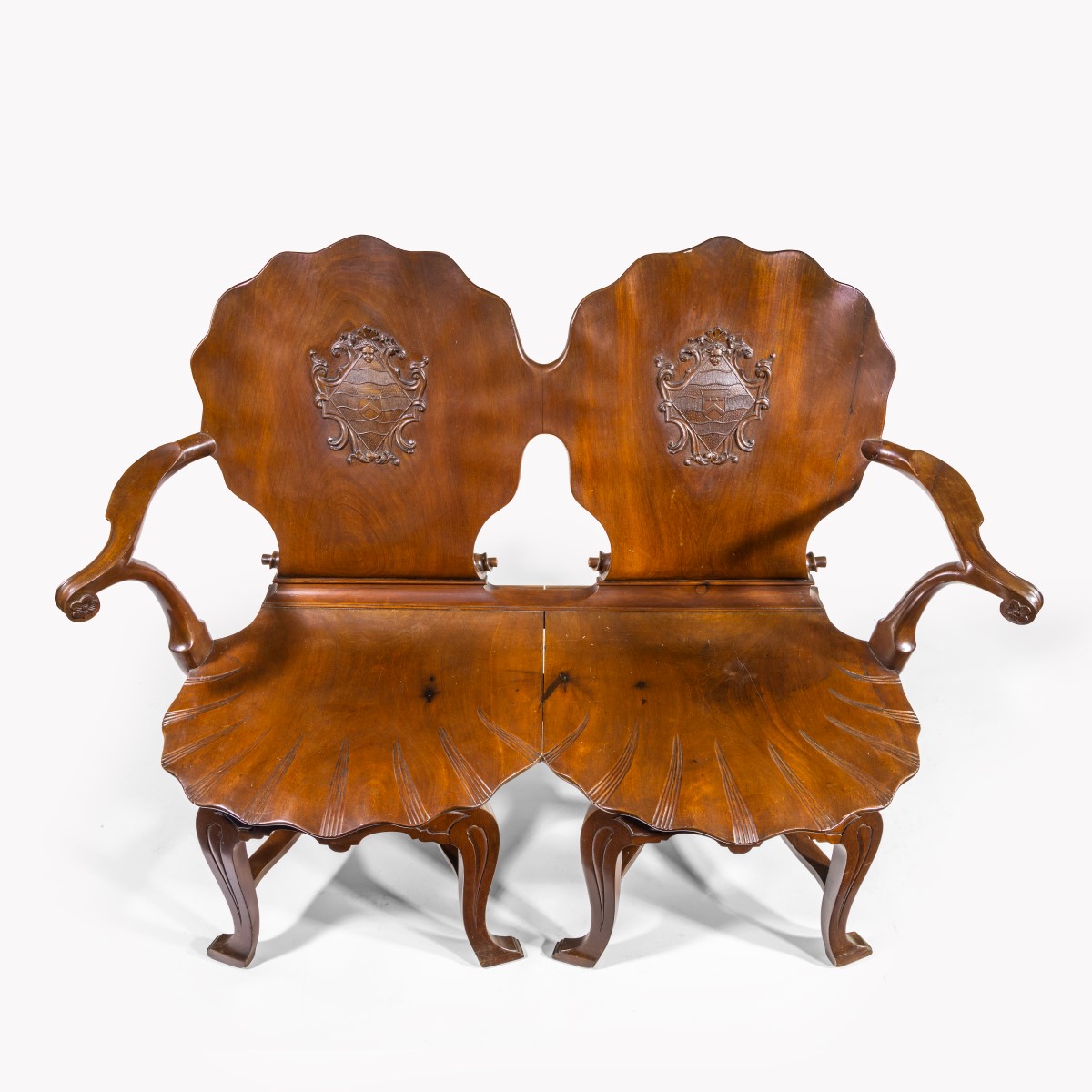 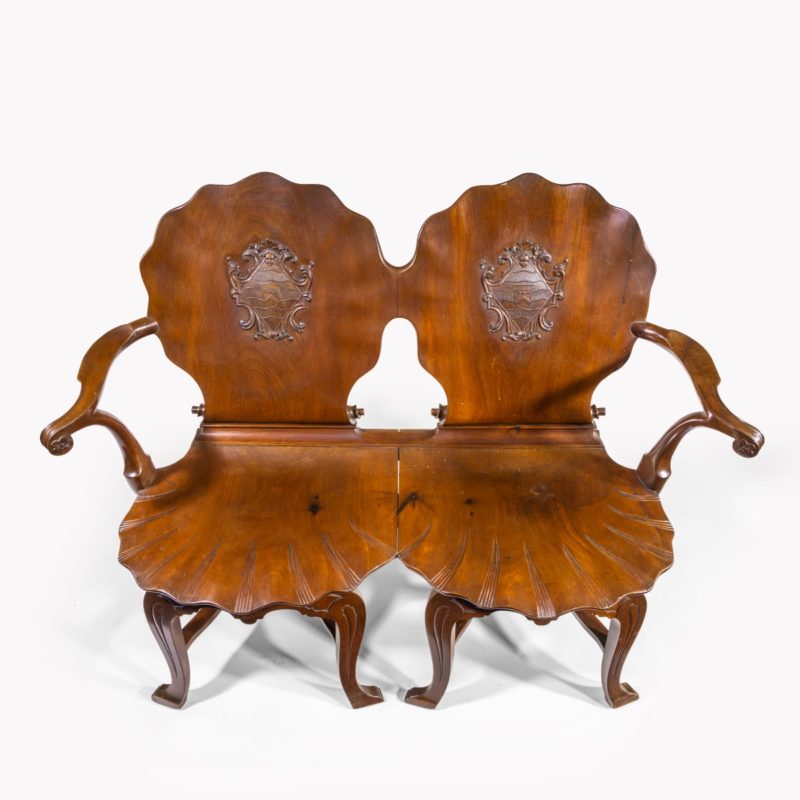 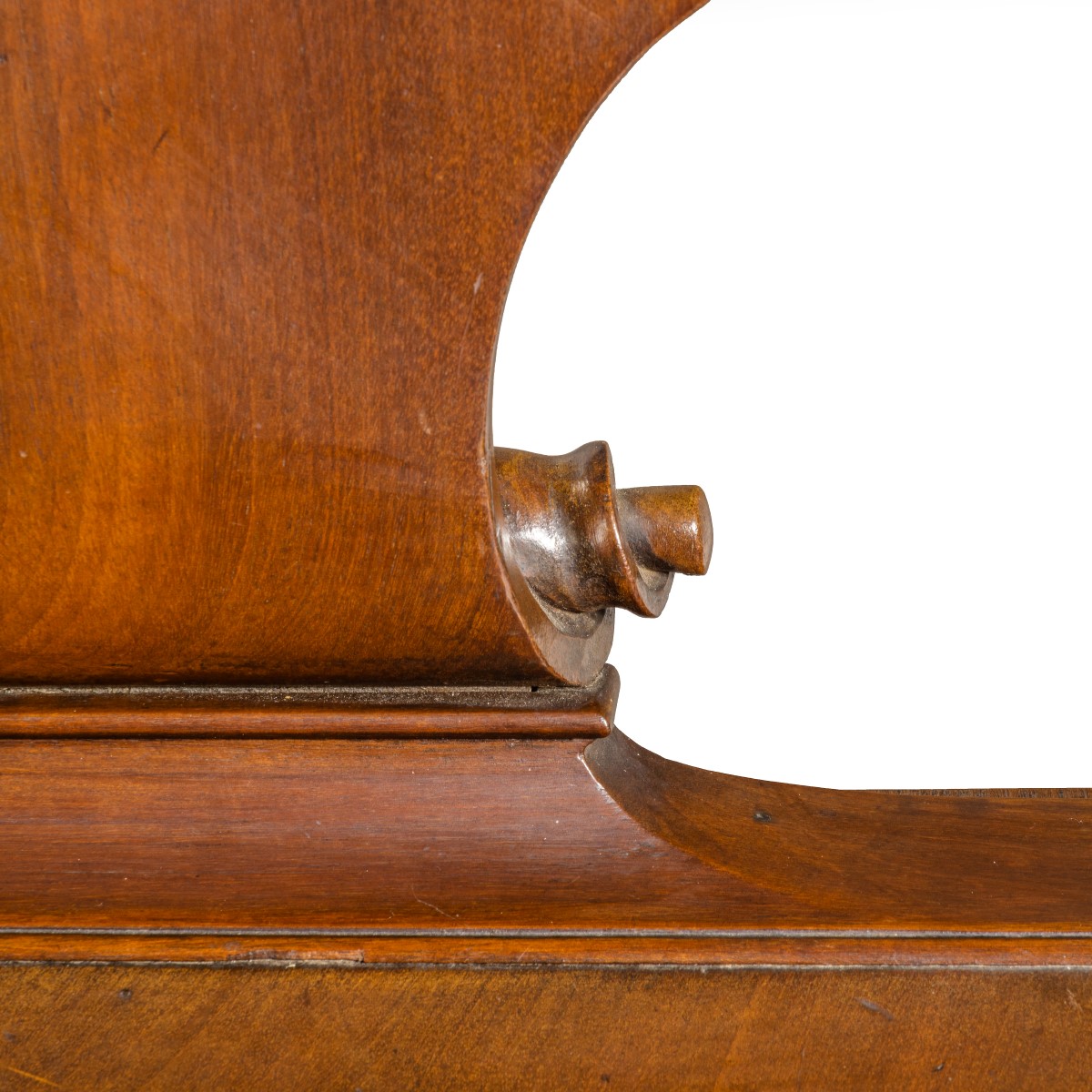 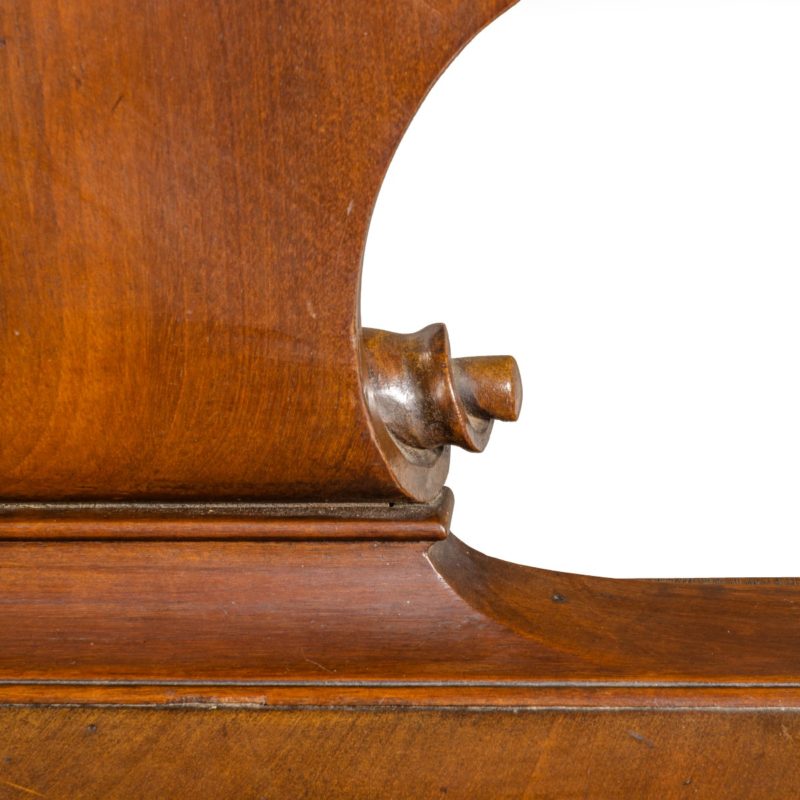 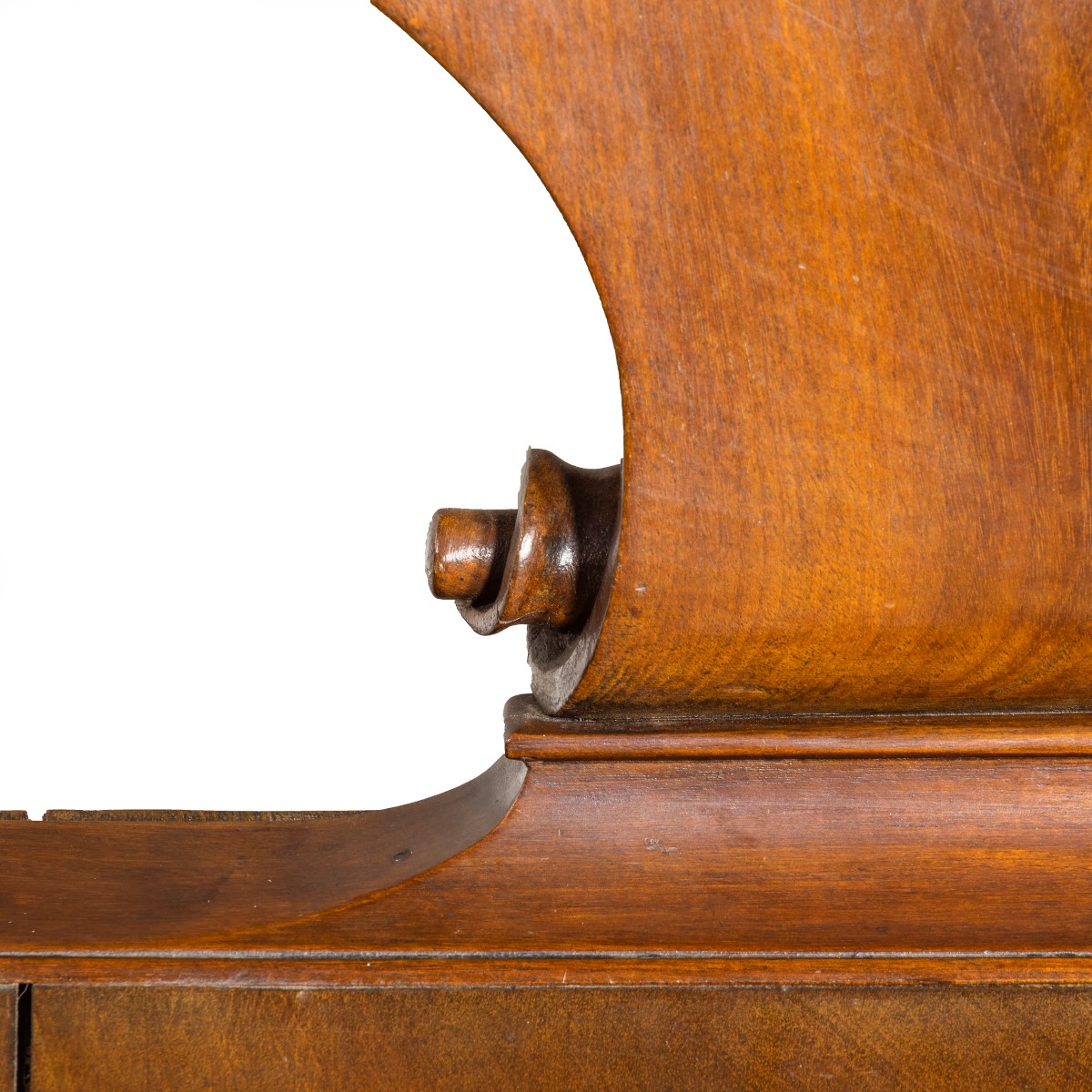 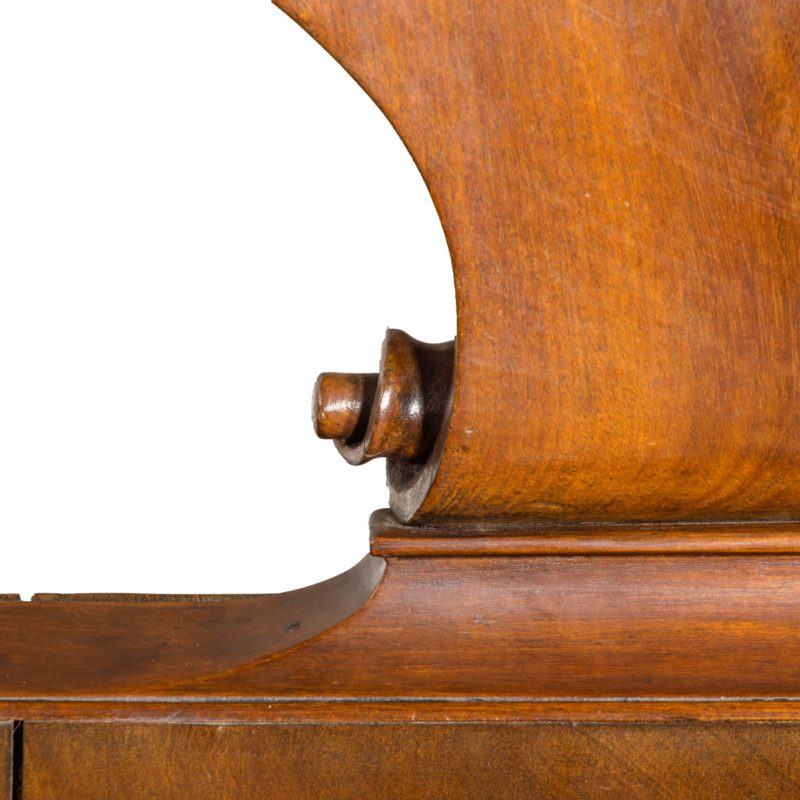 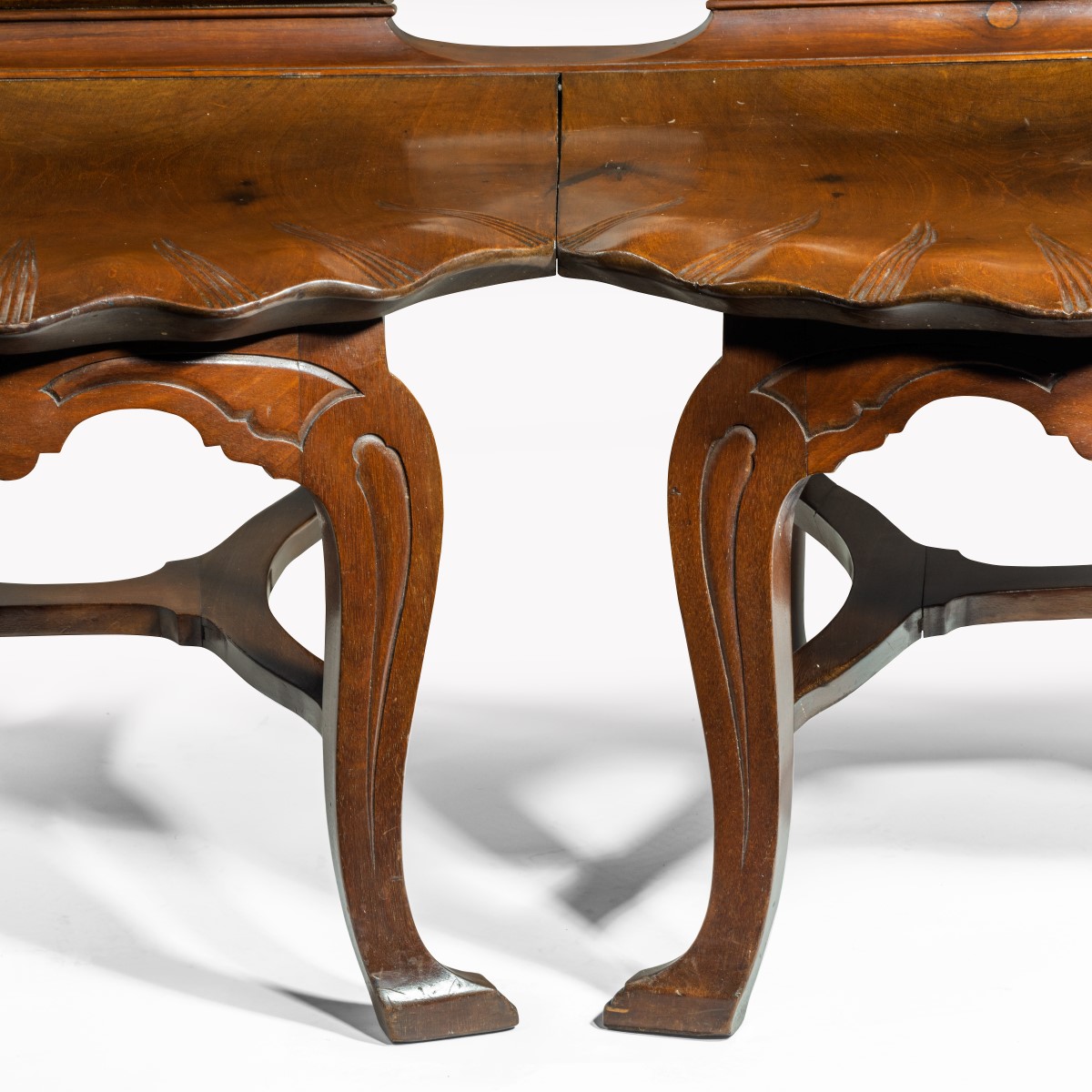 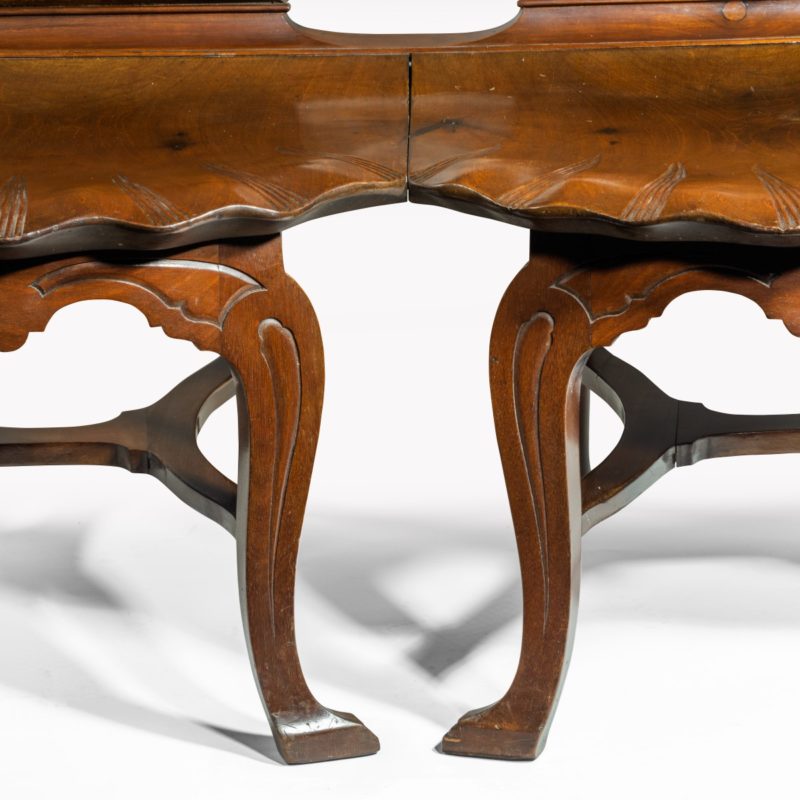 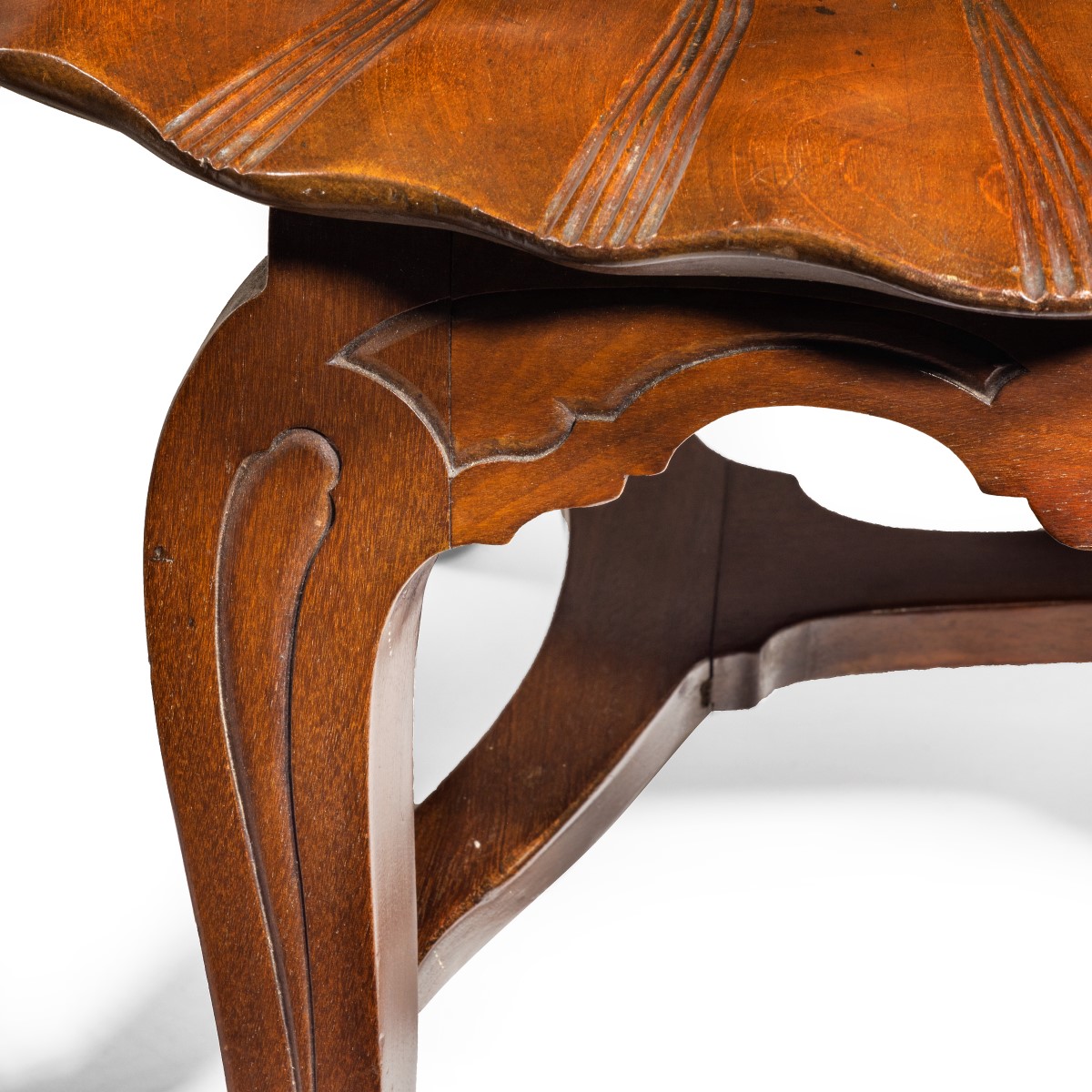 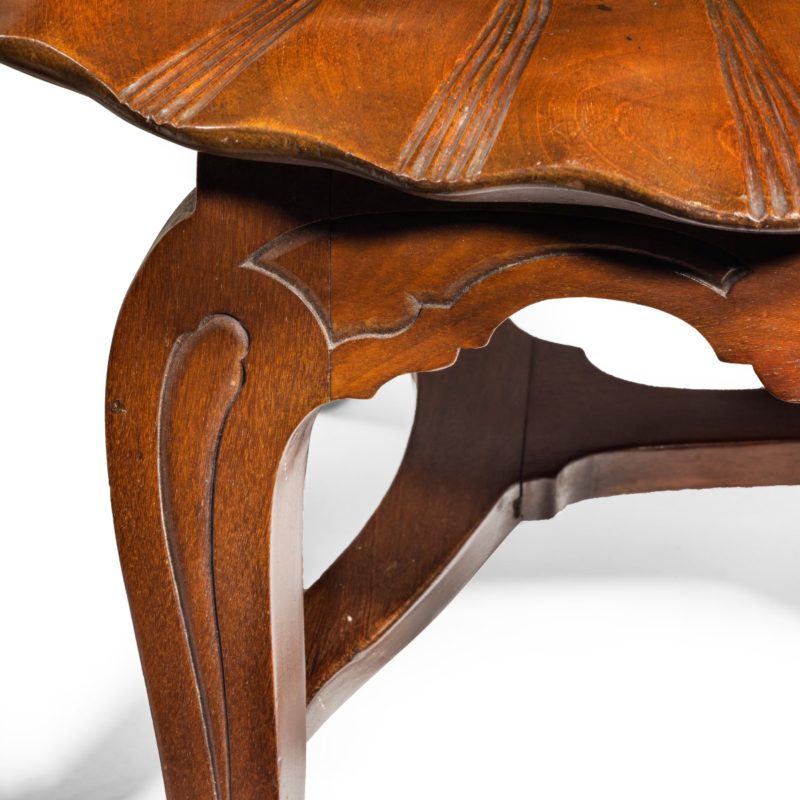 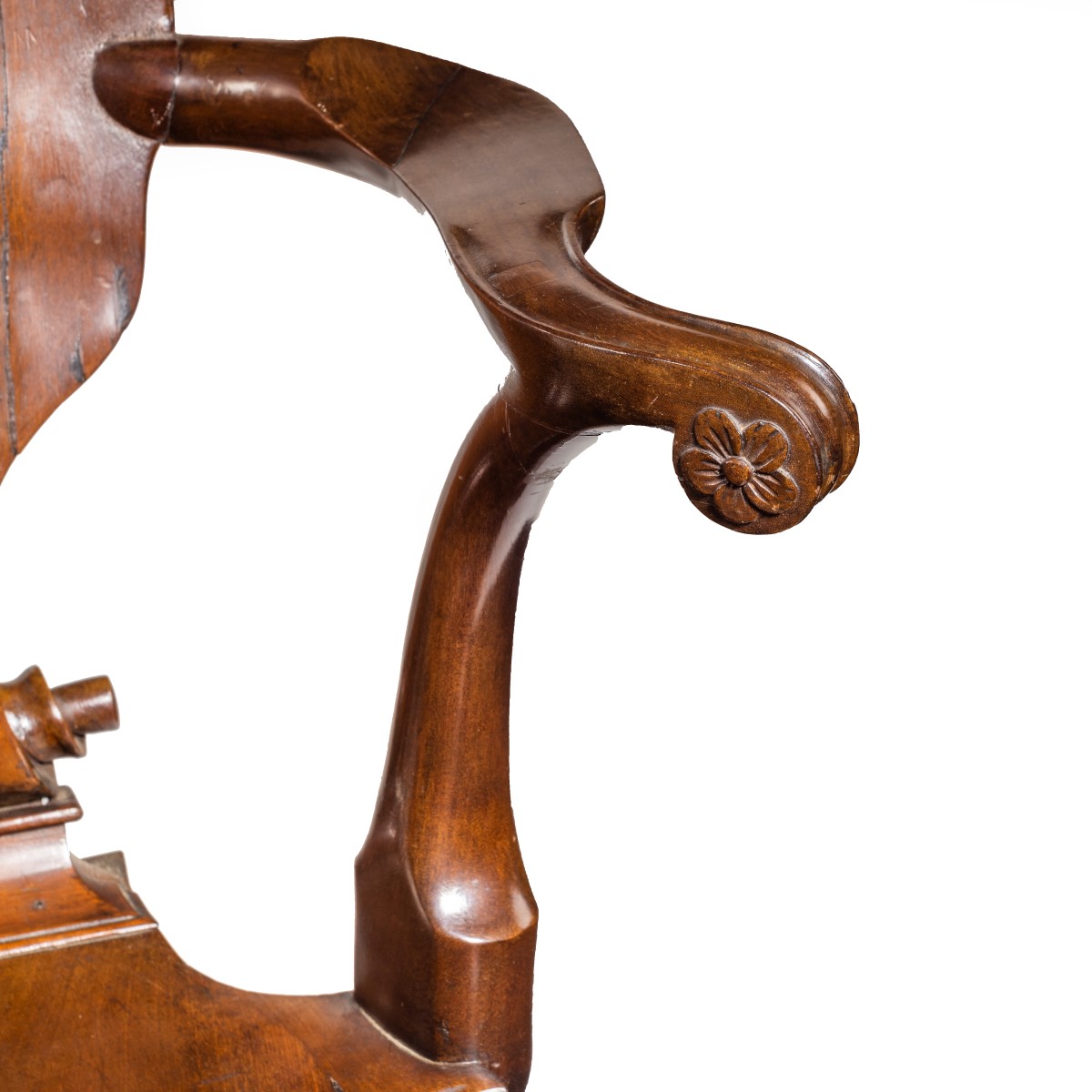 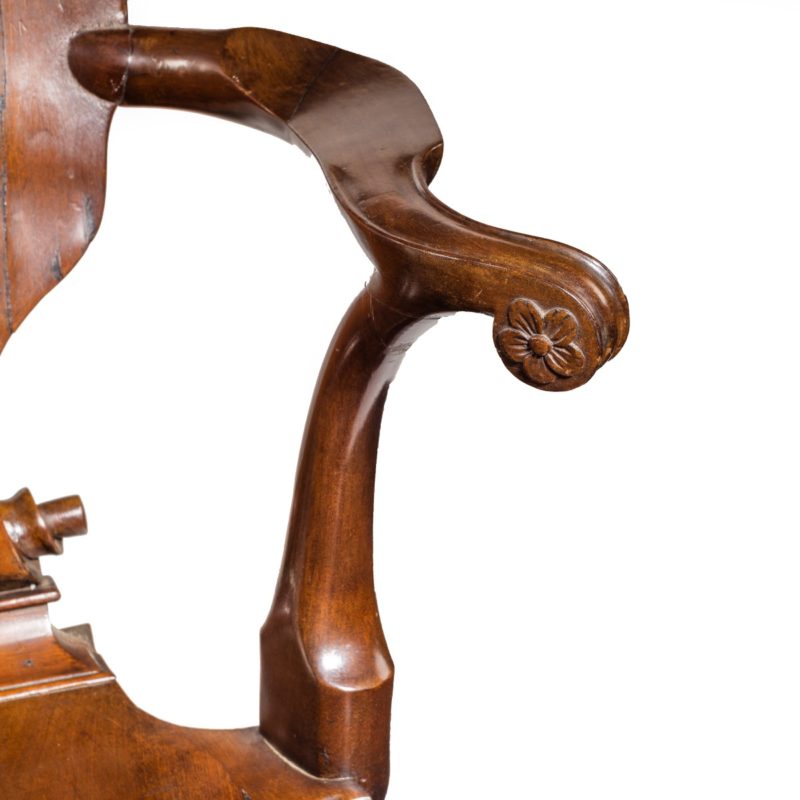 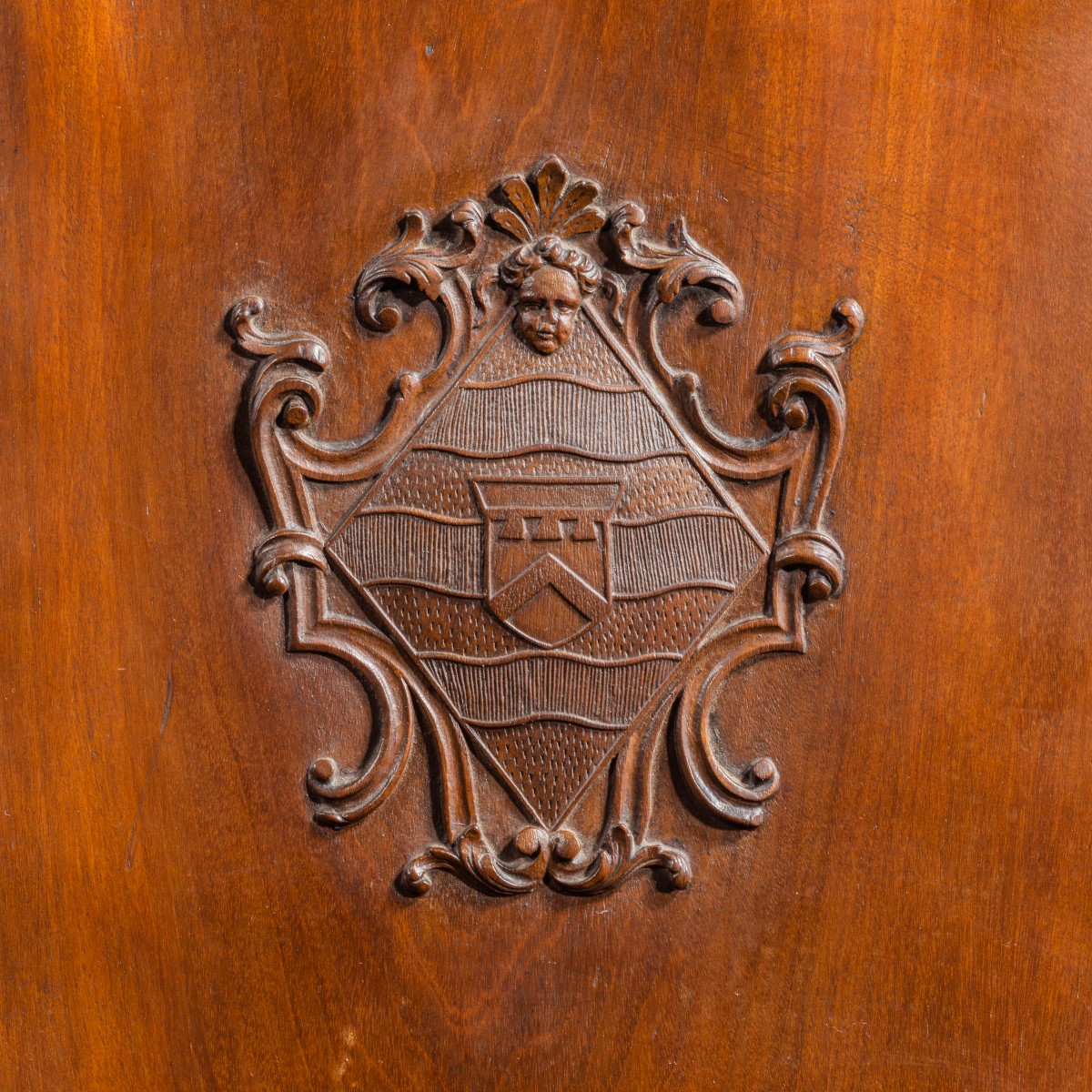 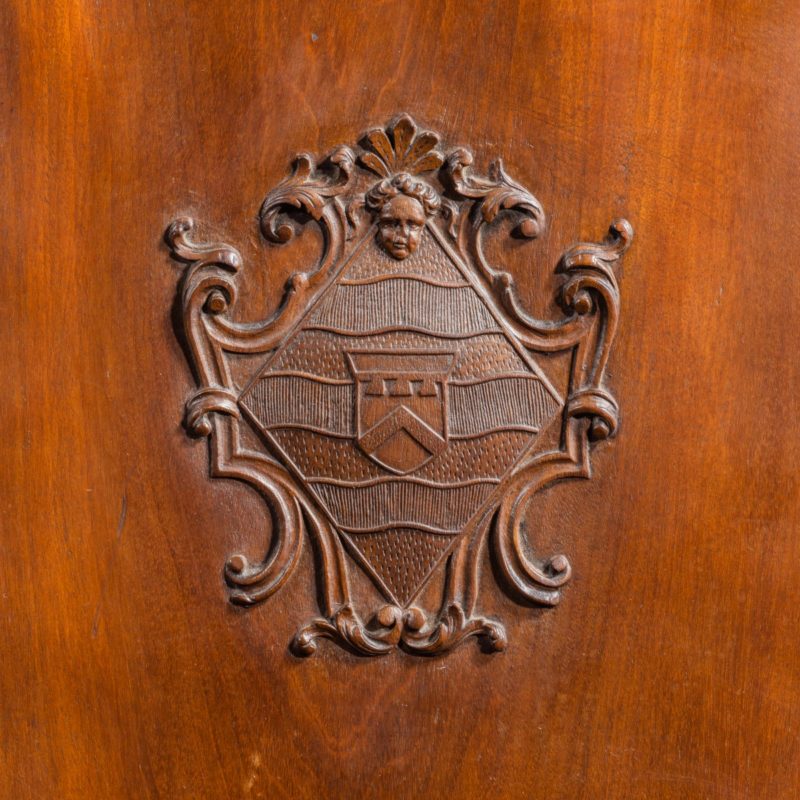 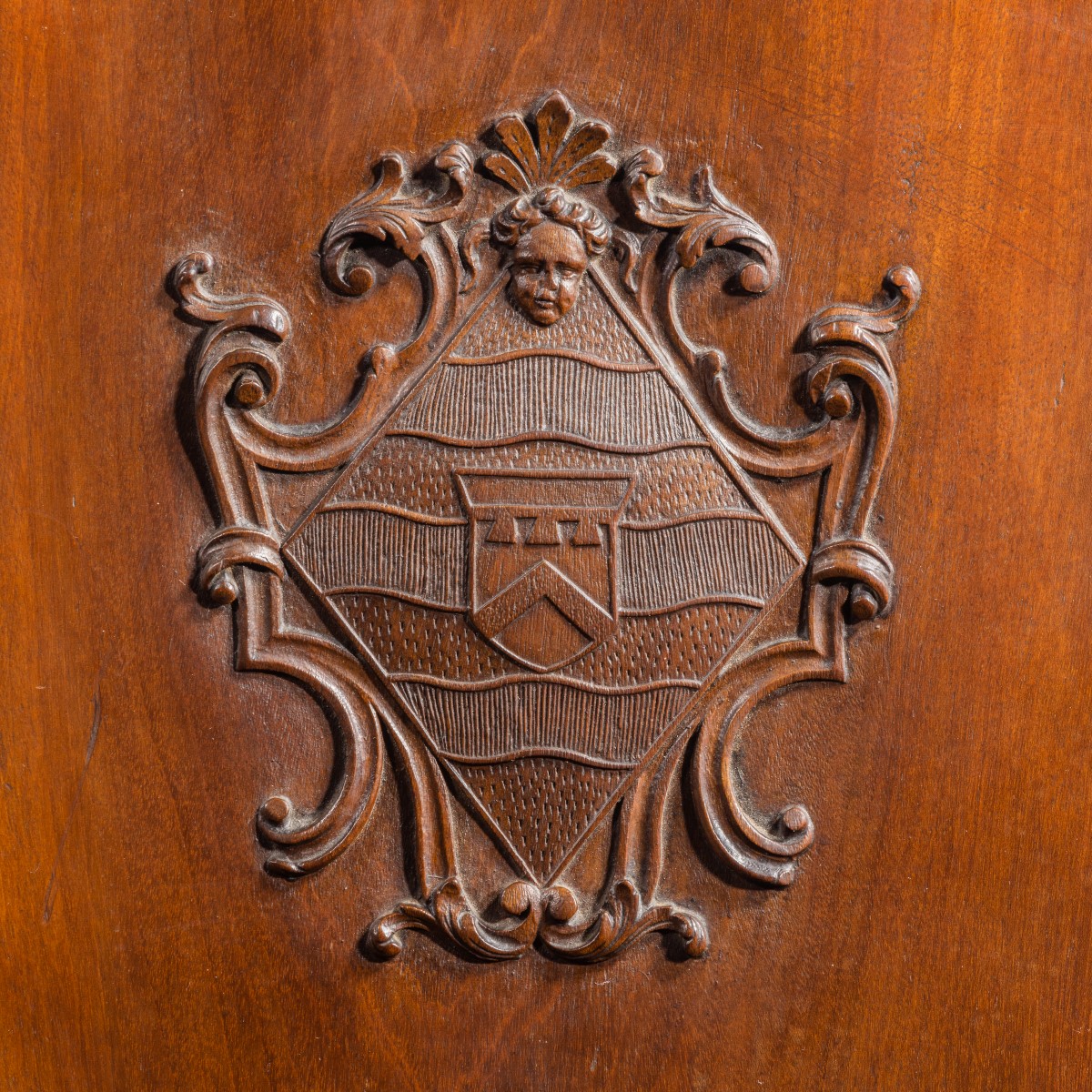 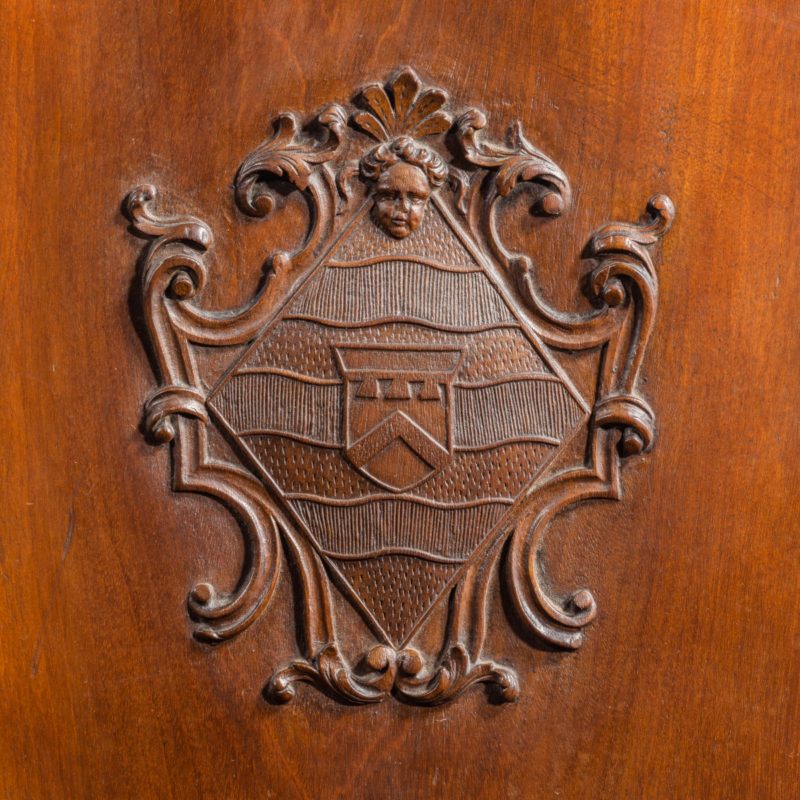 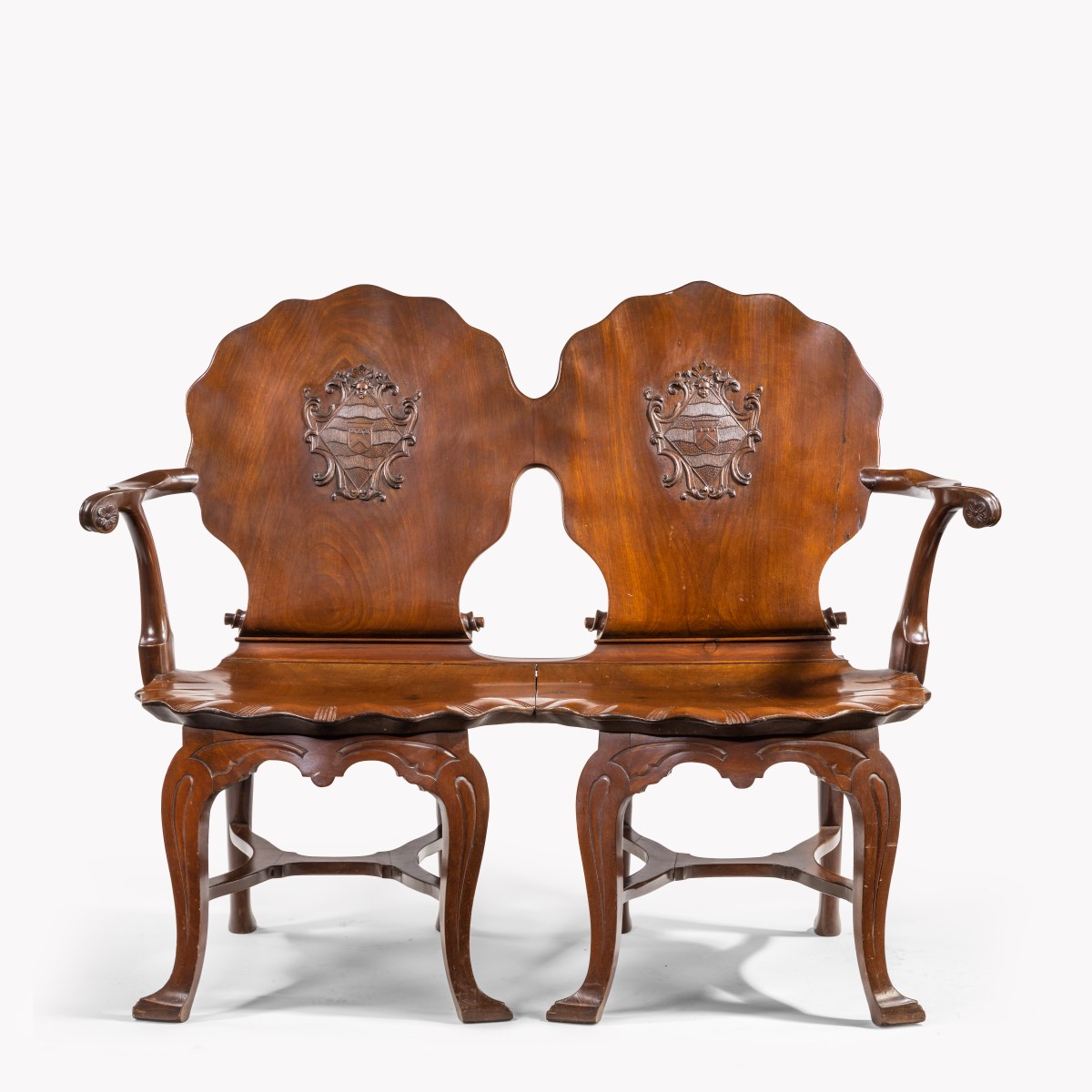 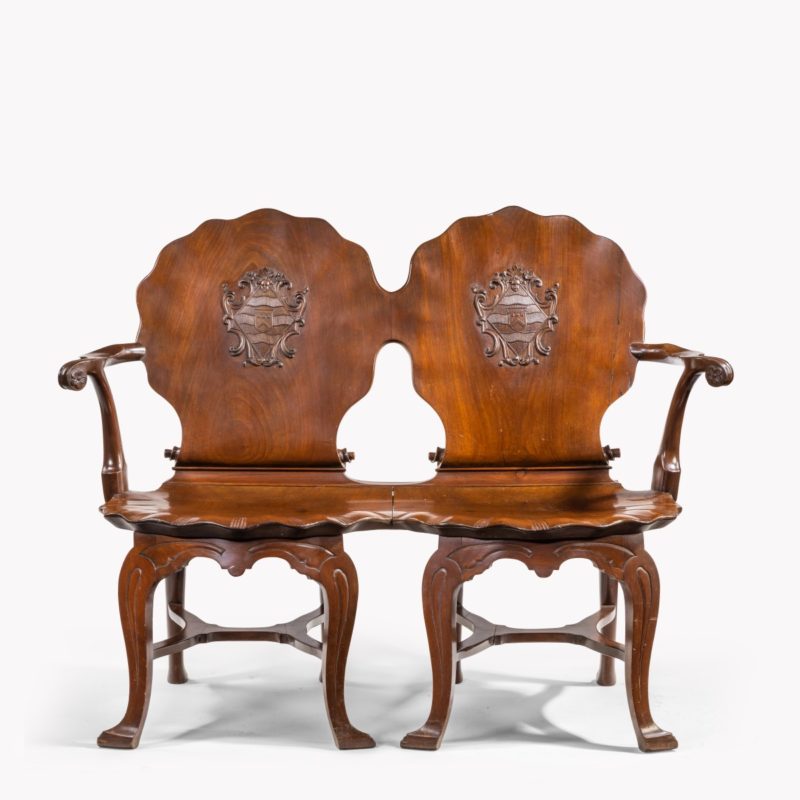 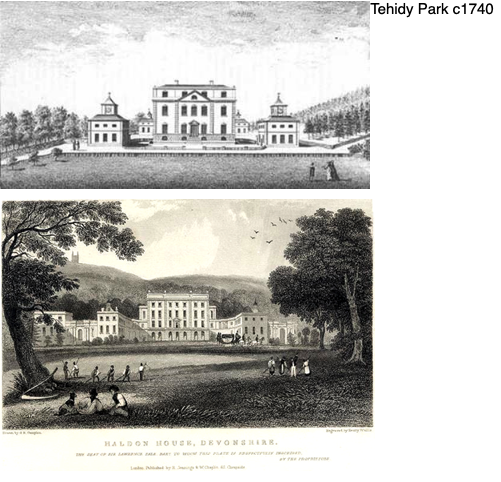 An exceptional late George II mahogany settee, made for Anne Basset, daughter of Edmund Prideaux, 5th Baronet of Netherton, attributed to William Hallett. The double scallop-shell back centred on a carved, scrolled lozenge enclosing the arms of Anne Basset, nee Prideaux (1718-1760), with scrolling arms, the solid shell-carved seat raised on shaped and moulded cabriole legs joined by an X-shaped stretcher.  English, circa 1756.

Footnote:  This fine bench is part of a set of hall furniture made for Anne Basset (1718-1760), the daughter of Edmund Prideaux, 5th Baronet of Netherton.  The arms on the bench are presented on a lozenge and this signifies, in heraldic terms, that the arms blazoned upon it are those of a widow – Anne’s husband John Prideaux having died in 1739.  The Basset family were wealthy Cornish landowners who made their fortune through the abundance of tin and copper that was mined on their lands.

This bench is closely related to a famous and widely-published set of ten hall chairs and two settees with shell backs made for Tehidy Park in Cornwall – Anne Basset’s home until the death of her husband. As she was pregnant at the time, Anne was allowed to continue to live in the house until the premature death of her son, and heir to the Prideaux titles, John in 1756.  At this stage Anne moved to Haldon House and it is likely that this bench was part of a commissioned set of hall furniture for her new home. Given the similarities in design and construction between the Haldon Hall and Tehidy Park suites, it is most probable that both were produced by the same workshop. Surviving suites of shell backed hall furniture are rare and this bench is particularly interesting given that it was commissioned by a wealthy lady patron, making it fascinating as a piece of social history as well as a most exceptional piece of furniture.

William Hallett:  Although the present bench and the Tehidy suite both relate to a design from Thomas Chippendale’s Director (pl. XXIV, fig. C)-a design for shell-backed “grotto furniture” that was also proper for “Halls, Passages and Summer-Houses”, it is likely that the furniture was produced by the eminent  London maker William Hallett.  Cabinet-maker to George II, Hallett was one of the leading craftsmen of his time. He became a silent partner to his apprentice William Vile and later also, John Cobb and they frequently worked in collaboration.  His many commissions included furniture for Badminton House, Holkham Hall, Gothic furnishings for Horace Walpole at Strawberry Hill, and large quantities of furniture for St Giles House in Dorset.  Indeed, a suite of padouk furniture in that house, which is extremely similar in its overall quality, carving and design to this settee, is believed to have been supplied by Hallett 1745 and 1752.