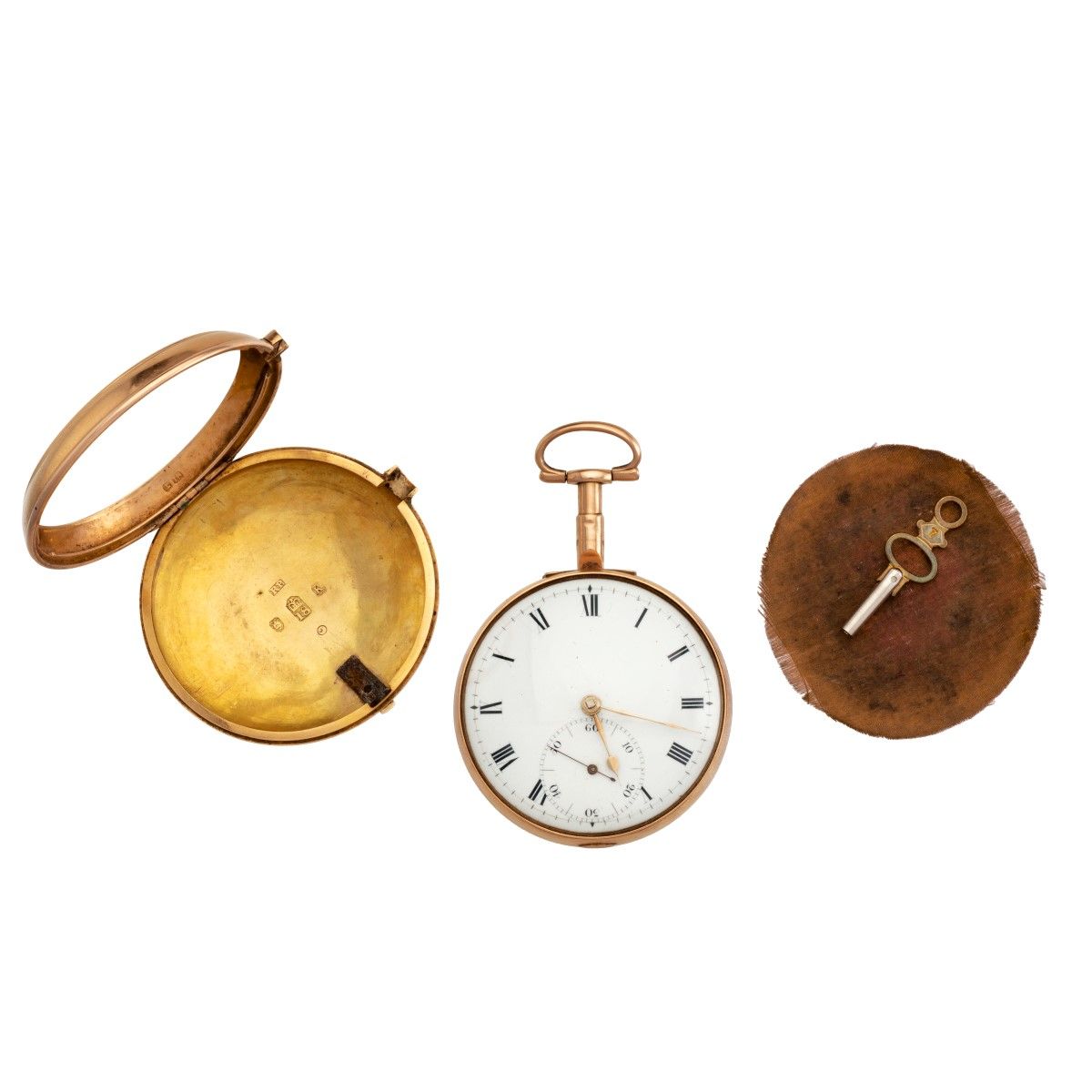 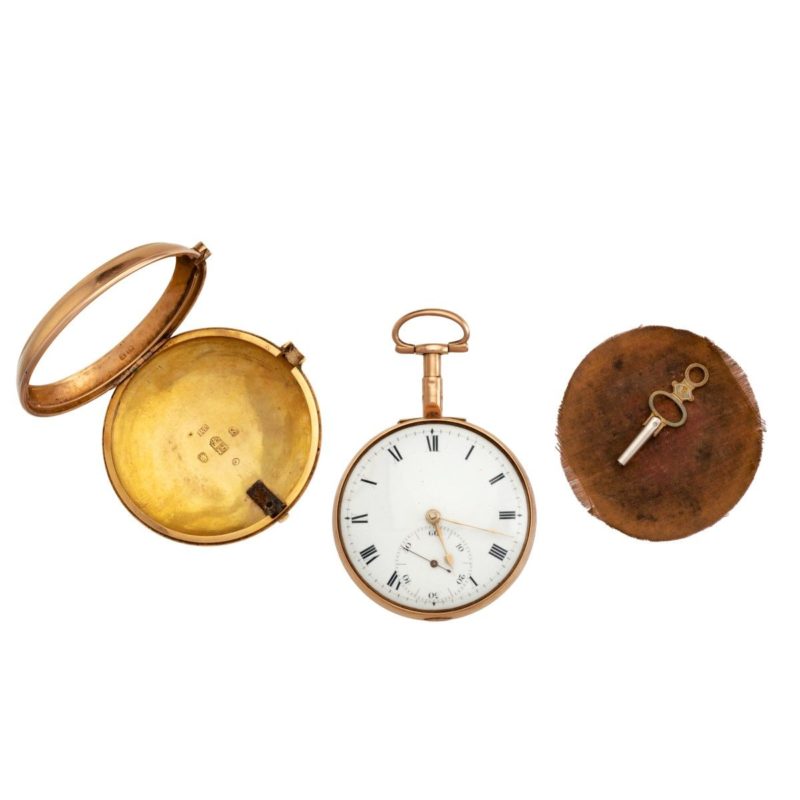 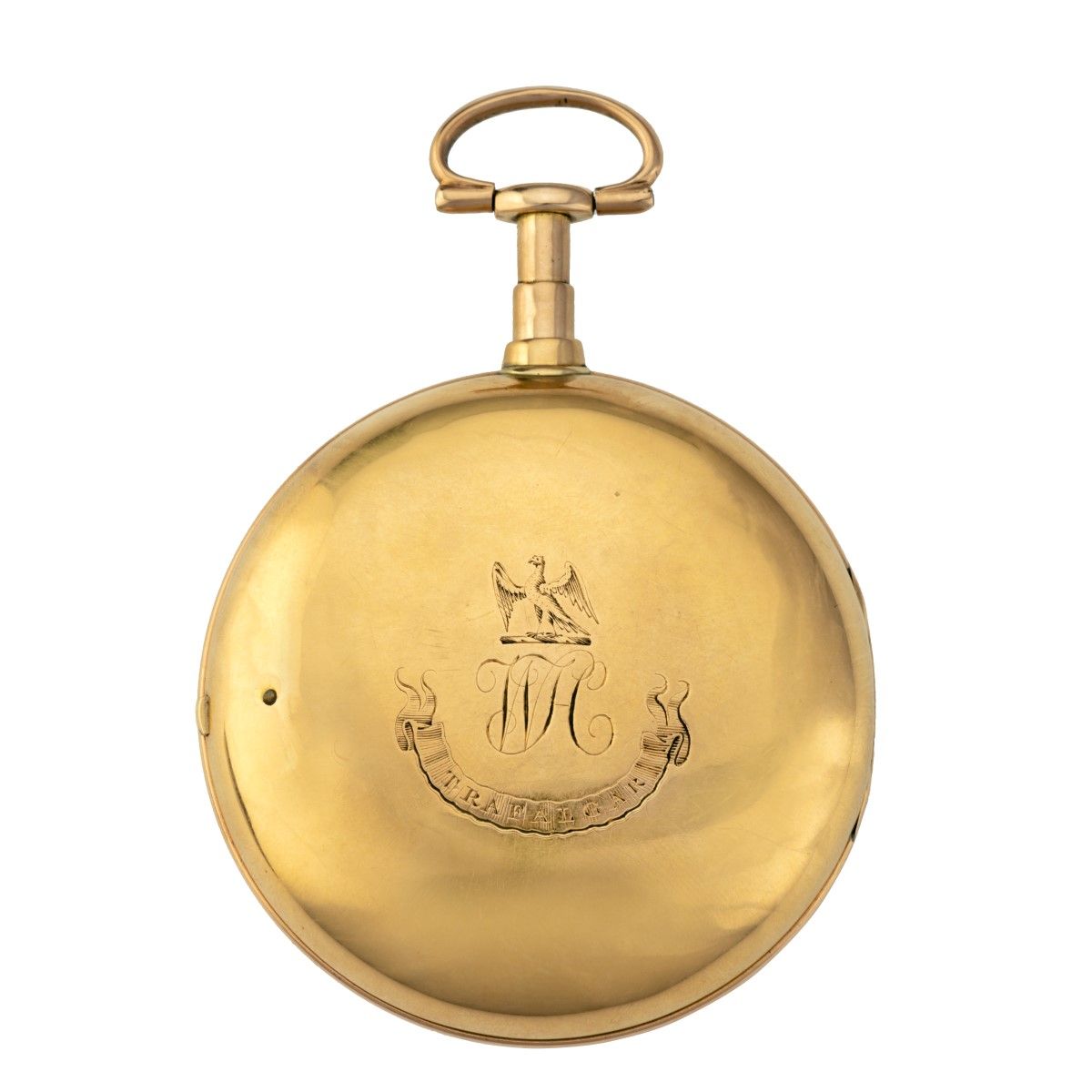 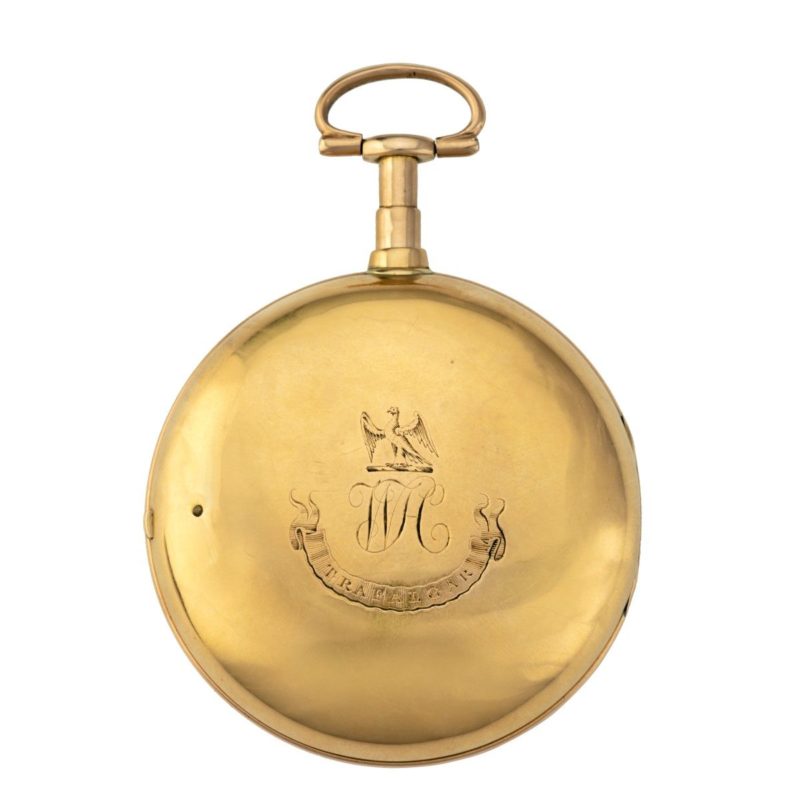 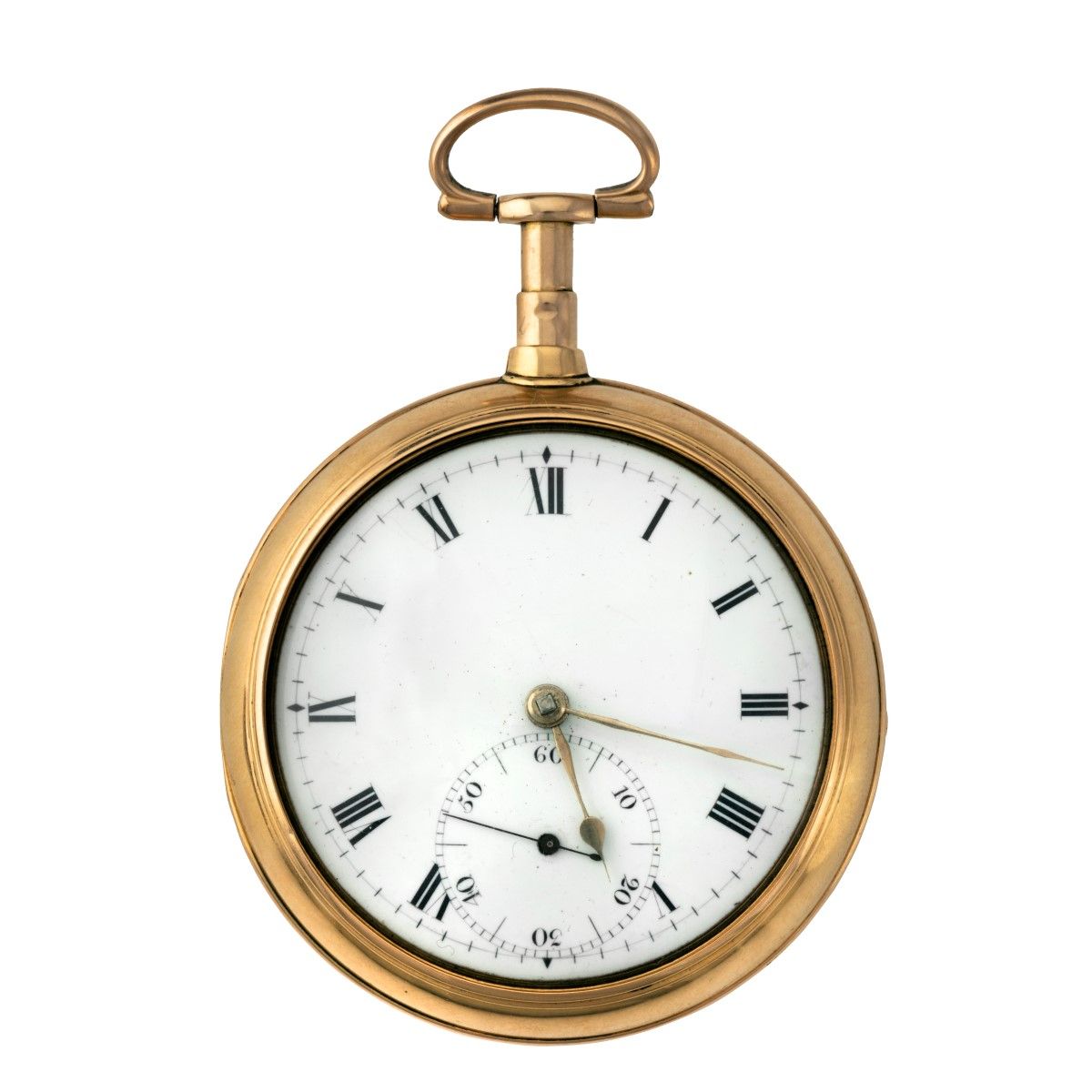 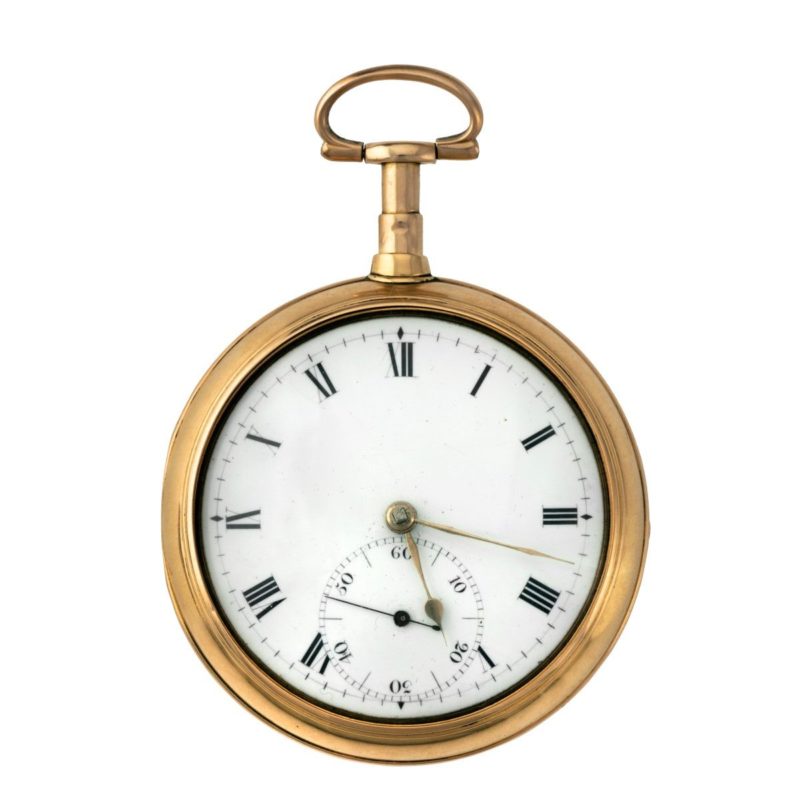 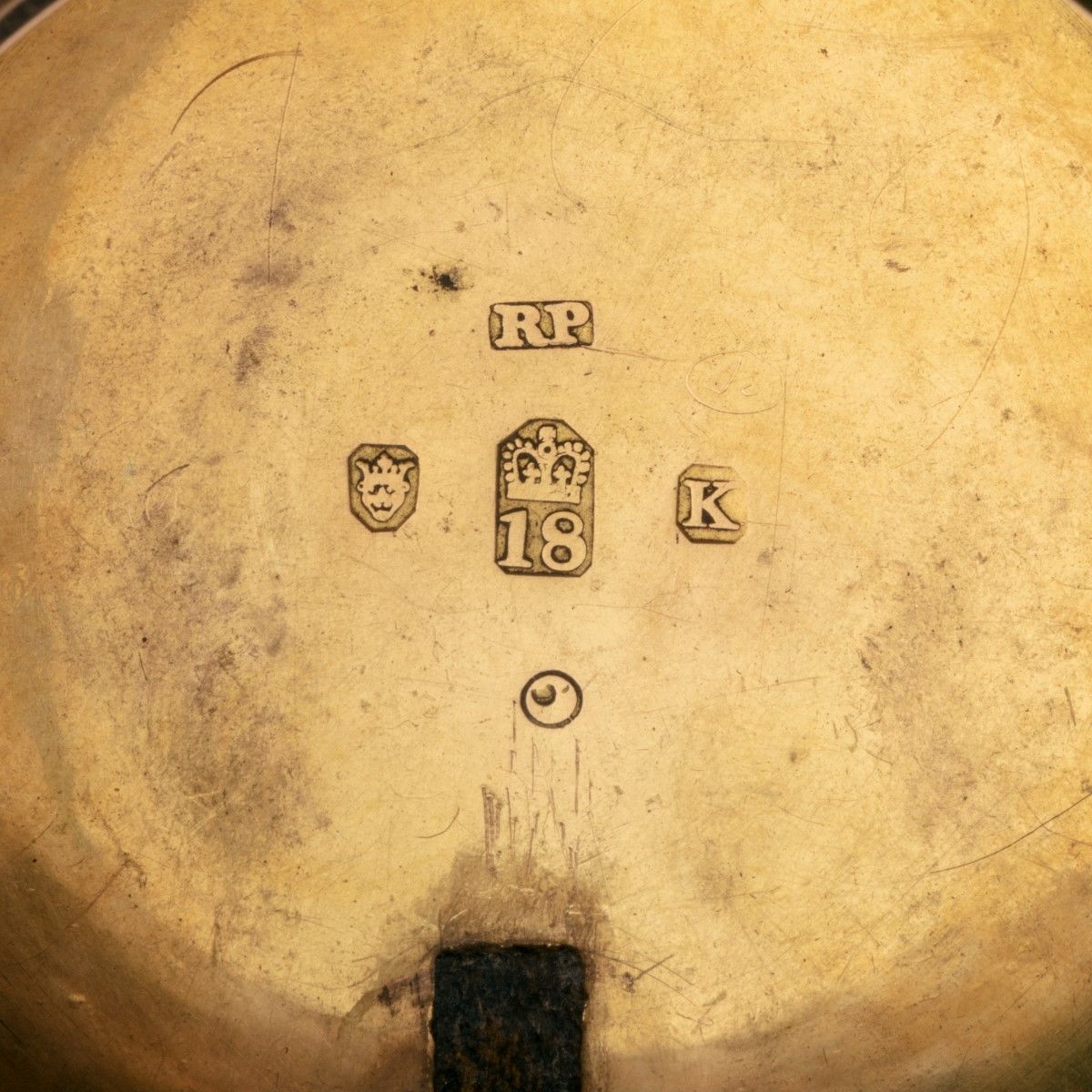 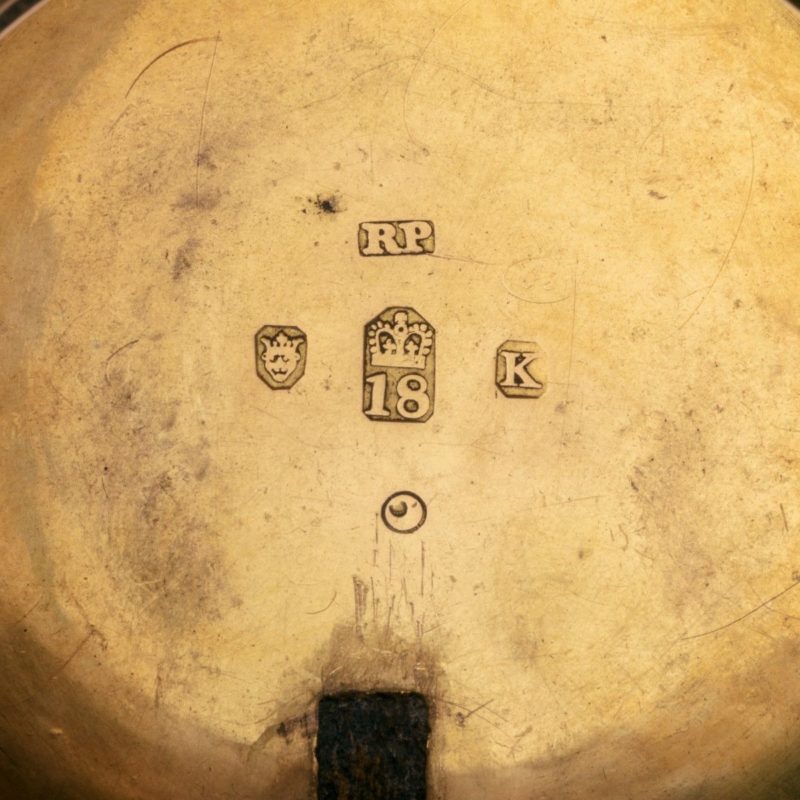 This gold pair-cased pocket watch has a gilt full plate engraved movement, pierced and engraved balance cock with diamond end-stone, Duplex escapement and silvered regulation. The enamel dial has black Roman numerals and five-minute divisions and gilt spade hands. There are both inner and outer gold cases, the outer engraved with the monogram WH and family crest of A Dove Rising for Herringham above a ribbon inscribed: ‘Trafalgar’. Movement unsigned, case maker’s mark RP probably for Richard Palmer, London, 1805.

William Herringham (1790-1865) entered the Royal Navy in 1803 as Volunteer First Class in Leopard, 50 guns, under Captain James Morris. As Midshipman, Herringham followed Captain Morris into Colossus, 74 guns, seeing action at Trafalgar when he was severely wounded for which he received a gratuity from the Lloyd’s Patriotic Fund. Herringham subsequently served in Caledonia, 120 guns, at the storming of the batteries in the Basque Roads in 1810 then, as second lieutenant, in Java, 46, during that frigate’s celebrated engagement with the American ship Constitution, 44 guns, in 1812. Captured by the enemy at the close of the action, Herringham was mentioned in dispatches for his gallantry and bravery during the fierce fight in defence of his ship. On his release, he resumed his naval career making captain in 1837 and, by his death, retired vice-admiral.

Cased in 1805, William Herringham may have carried this gold pocket watch at the battle of Trafalgar the same year. More likely, he purchased the watch – and had it engraved with his battle honour – following the action, possibly using his prize money or funds granted to him by the Patriotic Fund for his wound. It may then have accompanied him for the remainder of his distinguished naval career which included his eye-catching exploits in Java during one of the most celebrated single-ship actions in naval history.