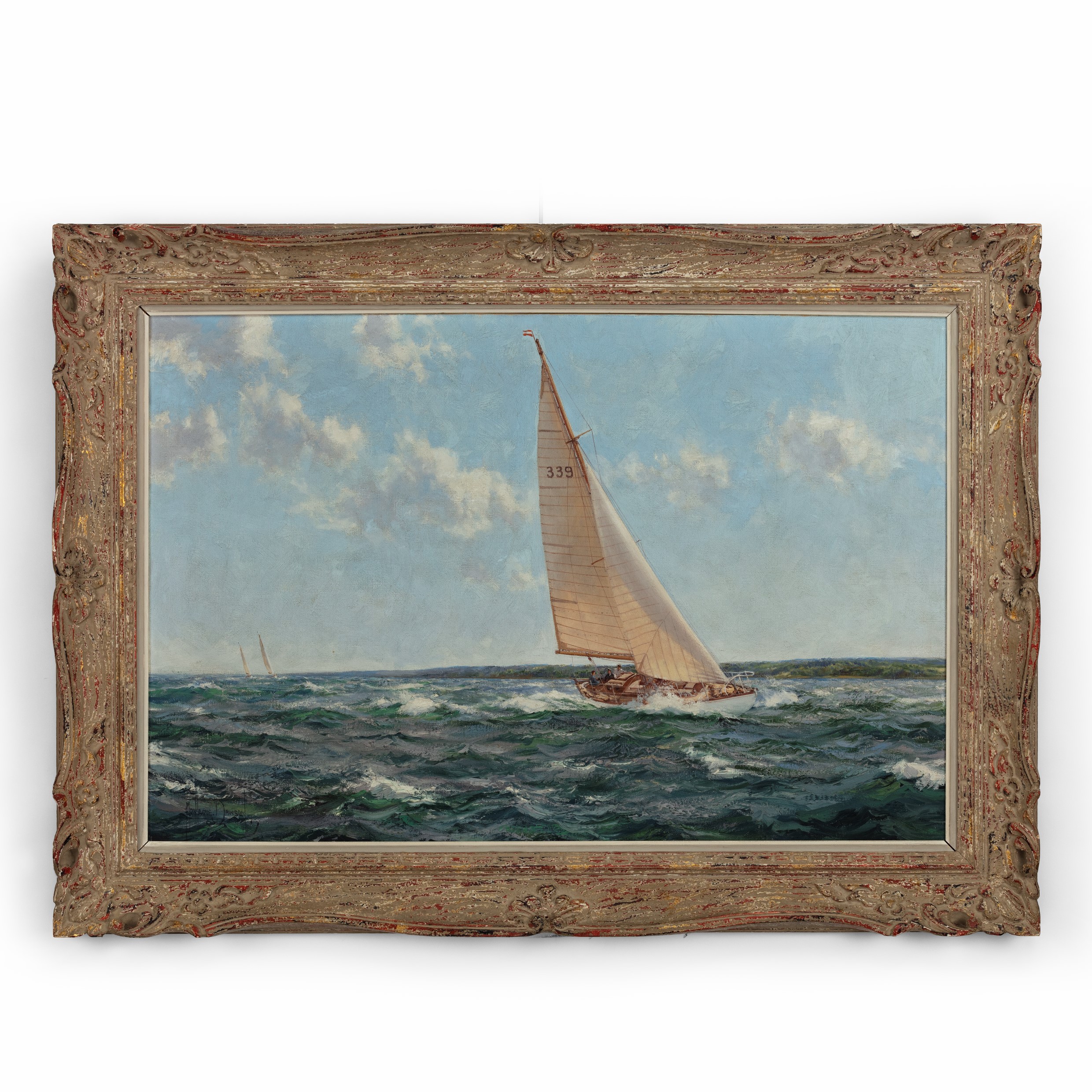 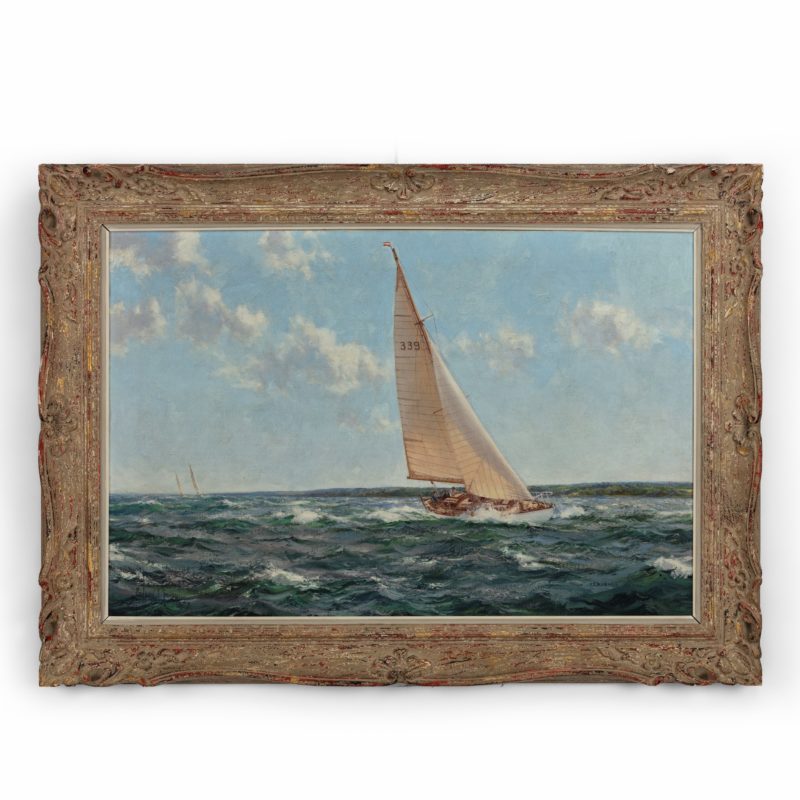 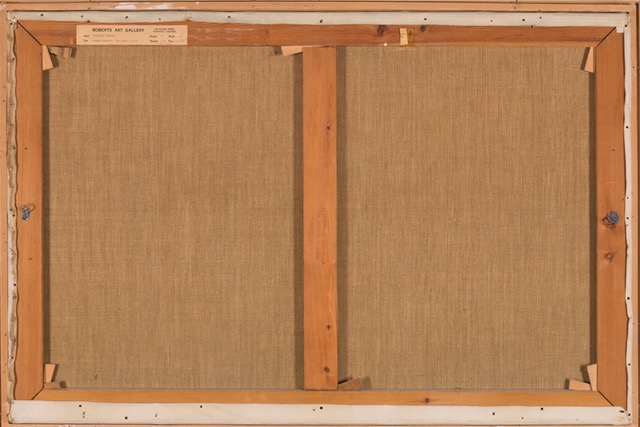 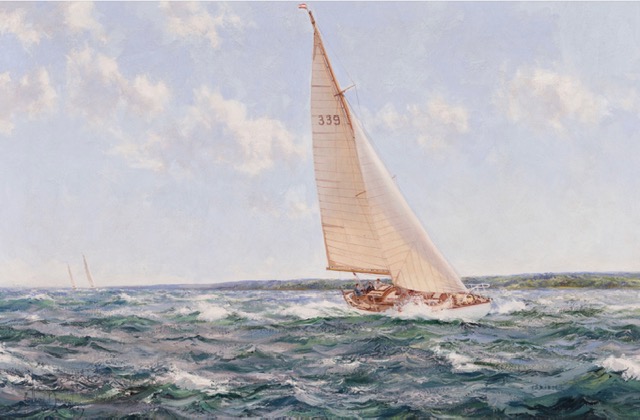 Montague Dawson: ‘Down Solent’ showing ‘Cohoe’, the 1950 Transatlantic Race winning yacht of K. Adlard Coles, oil on canvas, ‘Cohoe’ sail number 339, is on port tack with three figures in the cockpit and two further yachts sailing in the distance.  The reverse with a paper label from the Roberts Art Gallery, 139 Yonge Street, Toronto, Canada stating ‘Montague Dawson, ‘“Down Solent.” The Yacht Cohoe. Height. 24 Width 36in Number 5025. Price 950.’ Framed. English, circa 1950.

Footnotes: Montague Dawson RMSA, FRSA (1890–1973) was the son of a keen yachtsman and the grandson of the marine painter Henry Dawson (1811–1878). He served in the Dazzle Painting Section at Leith in WWI and 1924 was the official artist for an Expedition to the South Seas by the steam yacht St.George.  He was present at the final surrender of the German High Seas Fleet and many of his illustrations depicting the event were published in The Sphere.  After the war, Dawson established himself as a professional marine artist, concentrating on historical subjects and portraits of deep-water sailing ships often in stiff breeze or on high seas. During WWII he was once again employed as a war artist and again worked for The Sphere.  He exhibited regularly at the Royal Society of Marine Artists, of which he became a member, from 1946 to 1964, and occasionally at the Royal Academy between 1917 and 1936.  He was considered one of the greatest living marine artists, whose patrons included two American Presidents, Dwight D Eisenhower and Lyndon B Johnson, as well as the British Royal Family.   Another painting of ‘Cohoe’ by Montague Dawson entitled ‘Racing Days’ – “Samuel Pepys” and “Cohoe” was exhibited at the Royal Society of Marine Artists, Guildhall, London 1952 (No. 4).

Knud Hjelmberg Reimers was born in Århus, Denmark but educated as a shipwright in Germany; first at the Friedrich Krupp Germaniawerft, a yard building large sailing and motor yachts and then as an apprentice at Abeking & Rasmussen.  His first employment was in Stockholm at the design studio of the famous naval architect Gustaf Estlander. When Estlander suddenly died at the age of 54 in 1930, the 25-year-old Reimers bought his design practice. He promptly sold six 22m Skerry cruisers to the Detroit Yacht Club. He later drew plans for the great 75m Skerry cruiser Bacchant (II) that furthered his reputation as a designer of fast cruisers and racers. He argued that in offshore race sailing, the final test is to create boats that can travel at sea in any weather, and said (loosely translated): “The boat is the means to reach the treasure beyond the horizon”. His drawing archives are at the Maritime Museum in Stockholm.

Reimers’ most celebrated construction is the ‘Tumlare(n)’ which was designed in the early 1930s specifically for cruising round the Swedish archipelago but also became a popular class worldwide and is credited with having considerable influence on the development of yacht racing in Australia.