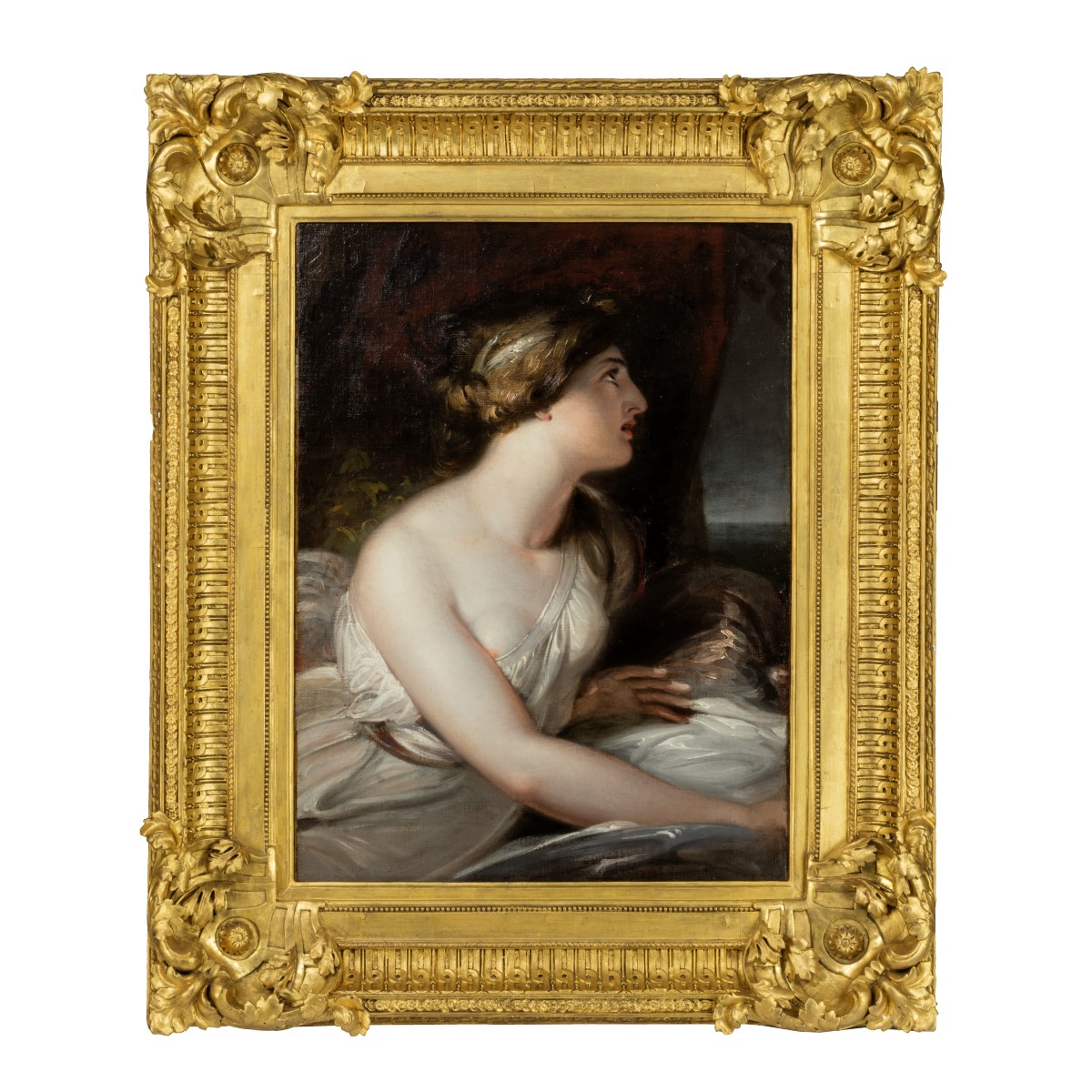 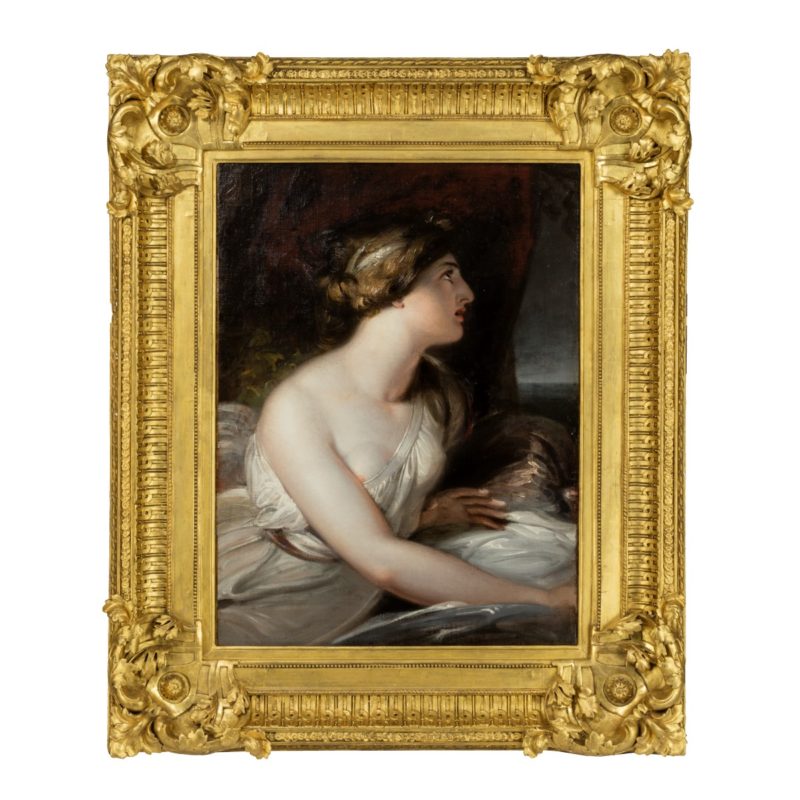 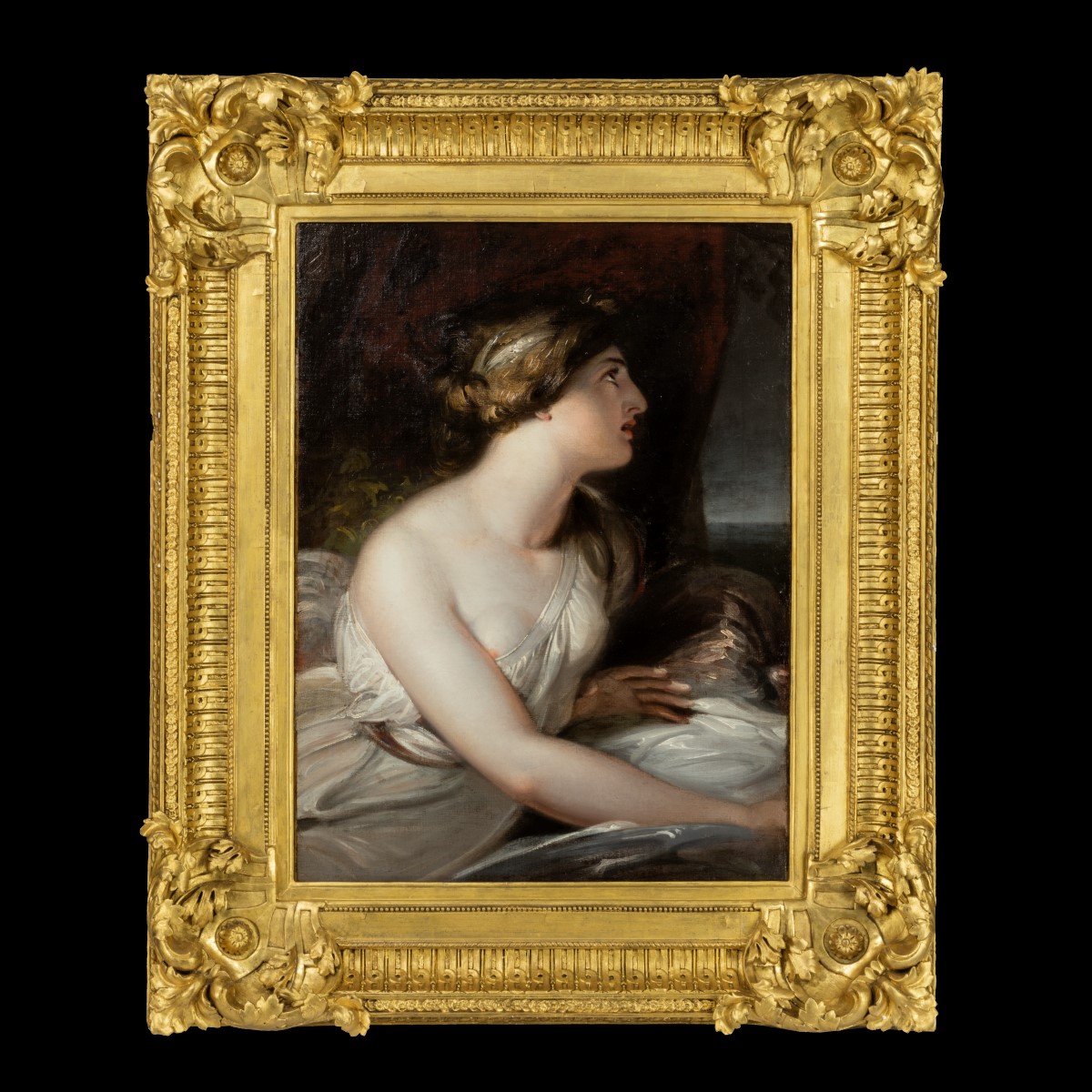 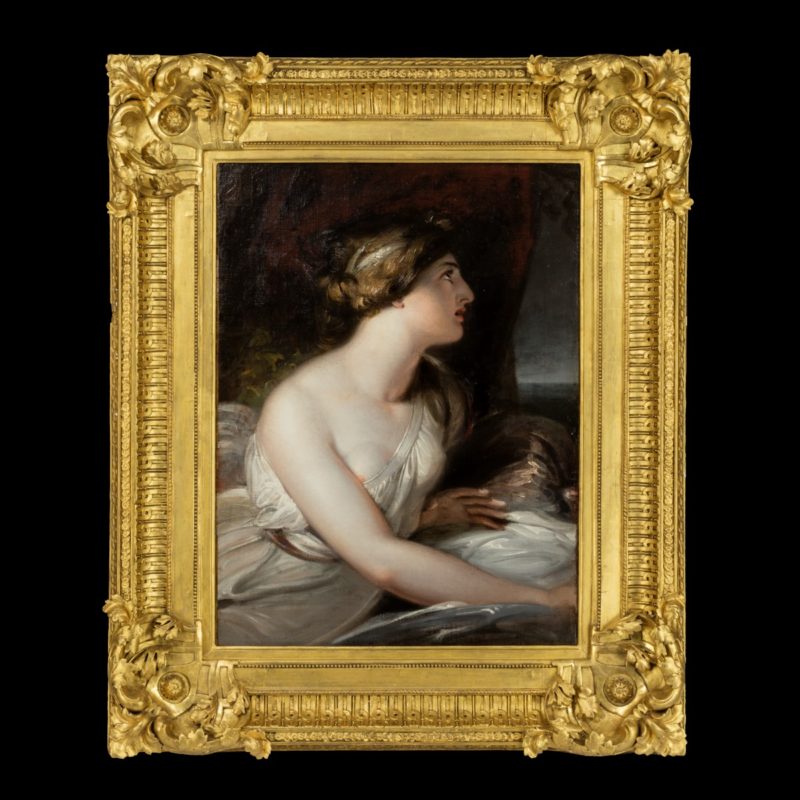 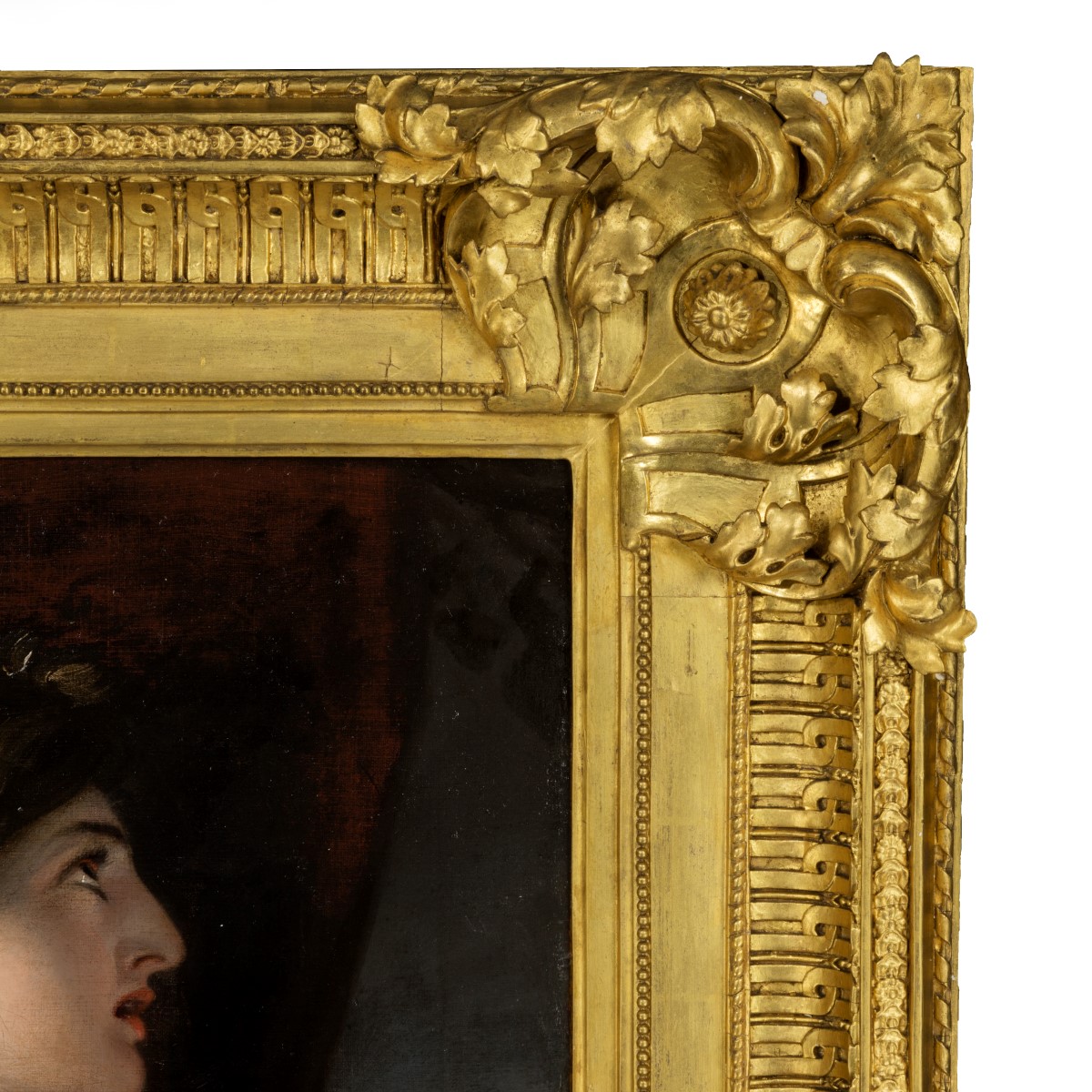 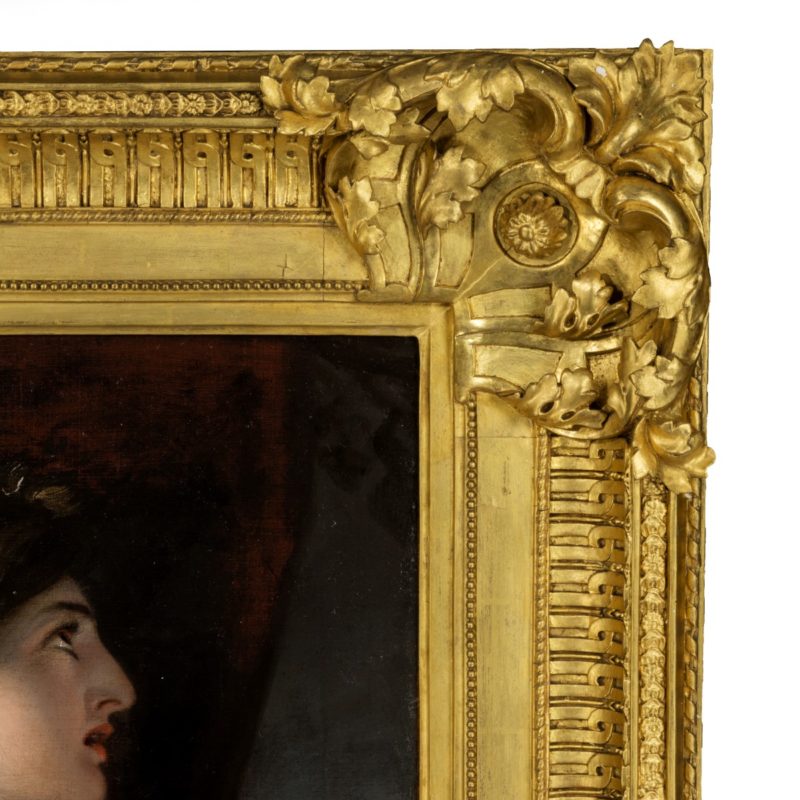 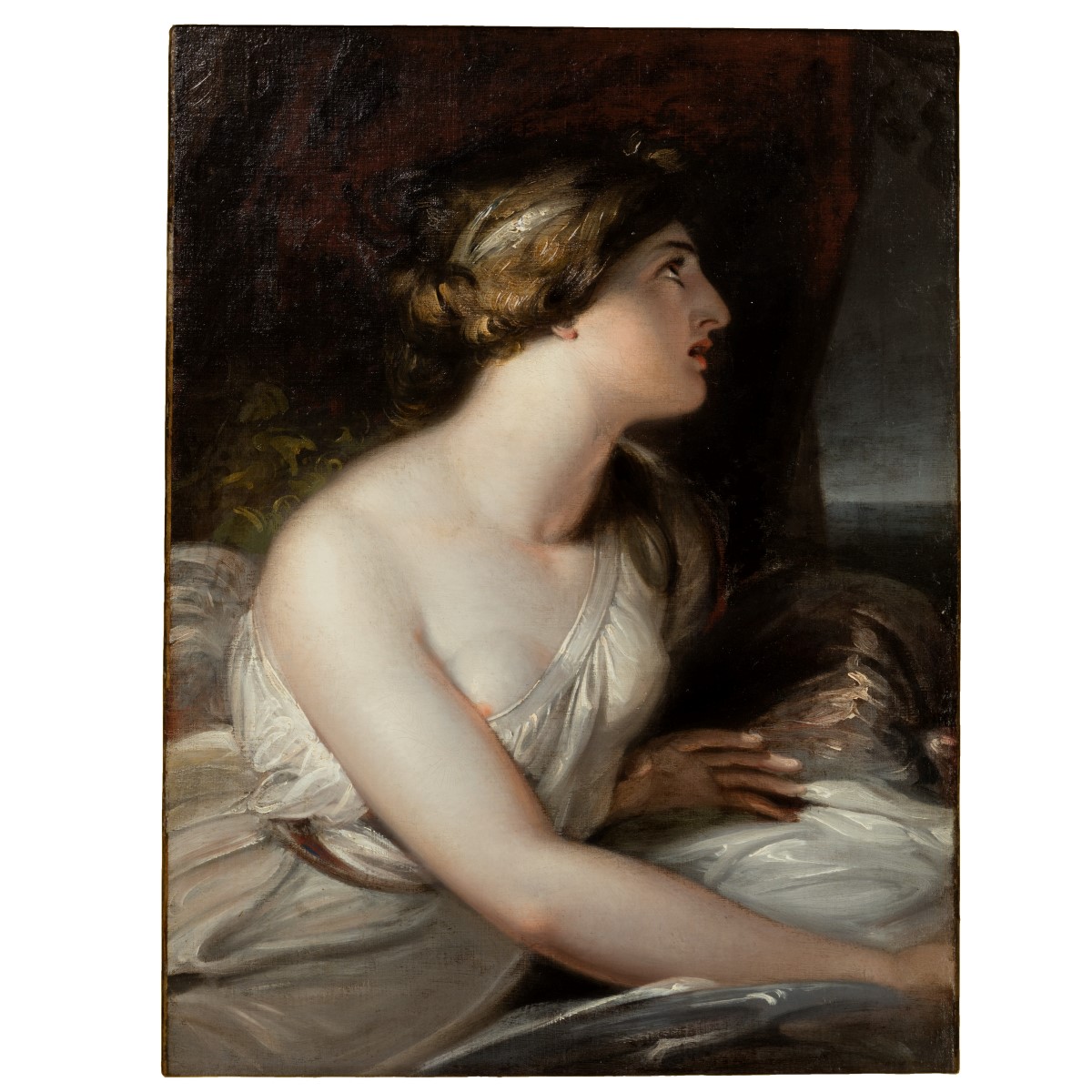 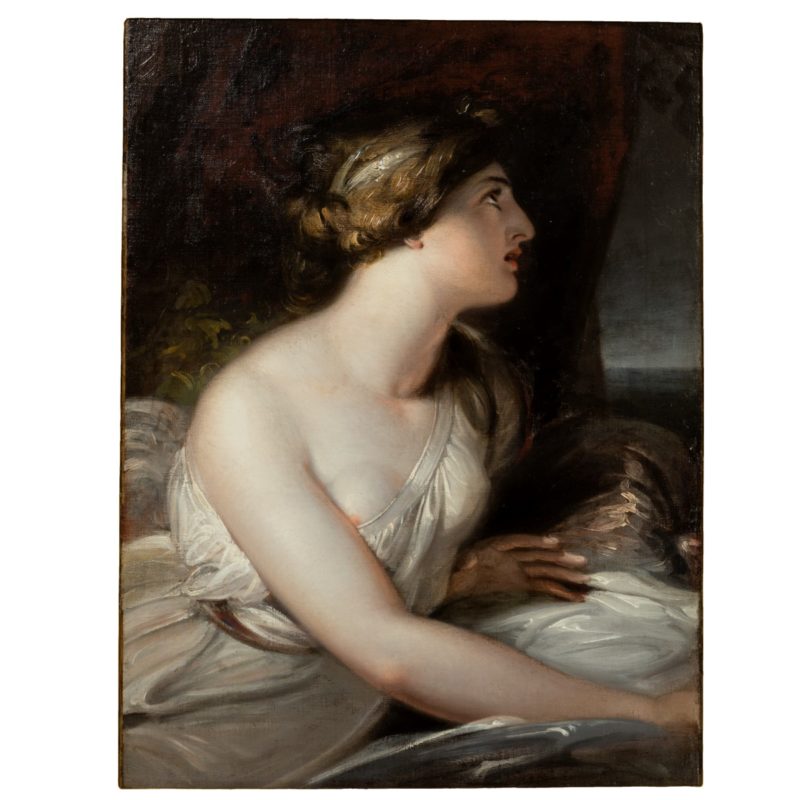 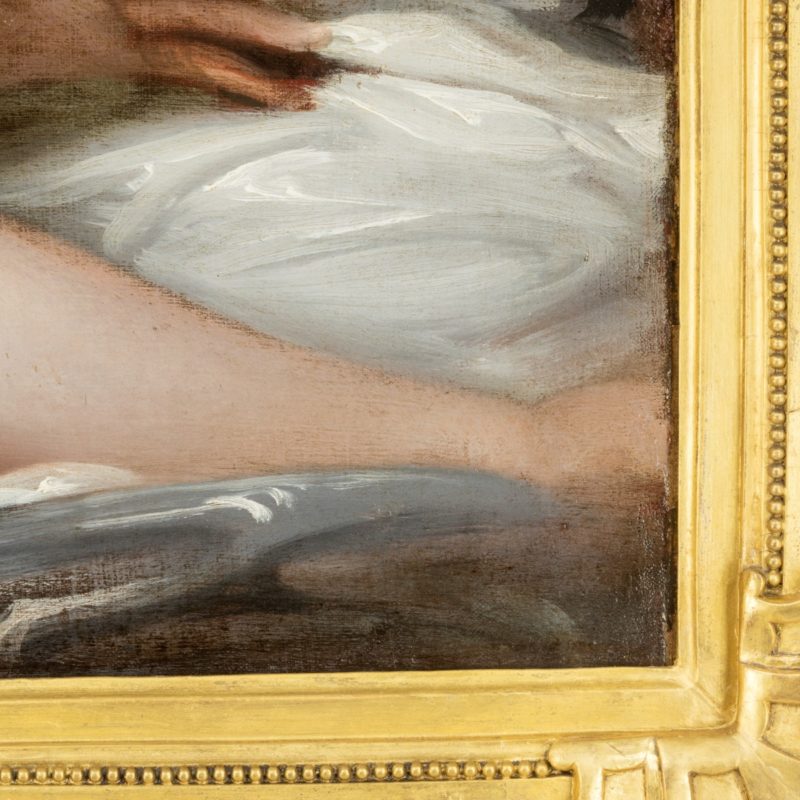 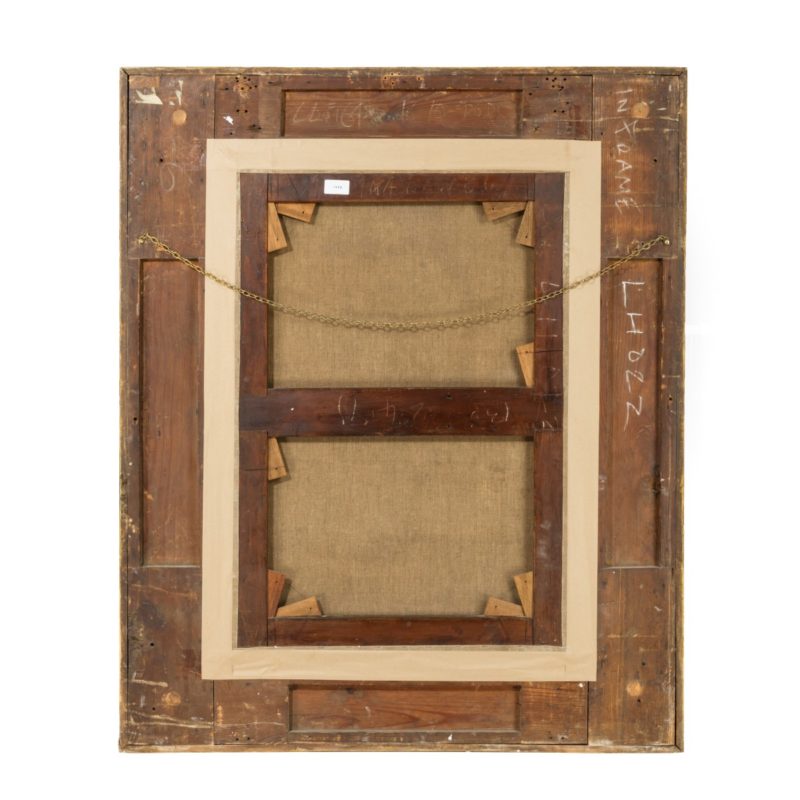 Portrait of Emma, Lady Hamilton as Ariadne; shown half-length on a couch, turned to right and looking up, wearing a loose gown which partially reveals her breast; rocks with foliage in the background.

This newly re-discovered representation of Emma Hamilton as Ariadne completes a quartet of known portraits by Richard Westall of Nelson’s mistress posing as subjects taken from mythology and Classical history.  The companion portraits show Emma as Sappho (National Museums of Liverpool), Saint Cecilia (National Maritime Museum, Greenwich) and as a bacchante (Private Collection). They were all likely to have been completed following Emma’s return to England in company with Nelson in 1800 and before the death of her husband Sir William Hamilton in 1803. A notable art collector who had previously encouraged and actively promoted portraits of his beautiful younger wife, Hamilton would have tolerated and welcomed images of Emma which, despite their classical staging, were highly sexualised with Emma displaying a naked breast in two of the four portraits. This daring feature by such a celebrated and scandalous sitter would have titillated the contemporary viewer and was a detail denied to the other many other well-known artists who portrayed Emma, notably George Romney. At the time of the sittings, Sir William was aware of the sexual relationship between his wife and his friend Nelson and so the otherwise reticent ambassador may have allowed his wife to be portrayed in a manner more familiar to a courtesan.

Norfolk-born like Nelson, Richard Westall may have gained access to Emma Hamilton through kinship links. The artist was also a close friend of Sir Thomas Lawrence (1769-1830) who was engaged by Sir William Hamilton to paint Emma as La Penserosa in 1791-2. In addition, Westall’s most generous patron and collector was the connoisseur Richard Payne Knight (1751-1824), a close associate of Sir William Hamilton at whose house Lawrence had sketched Emma. Westall’s portraits of Emma as Sappho and as Saint Cecilia were later copied, circa 1815, by artist and porcelain decorator Thomas Baxter onto a pair of vases for the Worcester porcelain maker Flight, Barr & Barr. Baxter visited Merton Place on several occasions between 1802 and 1805 making a series of sketches (National Maritime Museum, London) and striking up a close personal friendship with Emma Hamilton. His reproduction on porcelain of Westall’s paintings suggests a relationship between the two artists and supports a dating of Westall’s portraits of Emma to this same period.

The artist’s close ties with Nelson’s circle are also evident when Westall was commissioned to prepare a series of illustrations for John M’Arthur and James Clarke’s ‘official’ biography of the admiral published after his death. Admired as a history painter who contributed to Boydell’s Shakespeare Gallery, Westall supplied several striking oils (all NMM, London) for reproduction notably ‘Nelson and the Bear’ which has come to represent this unlikely episode in the admiral’s youthful career.