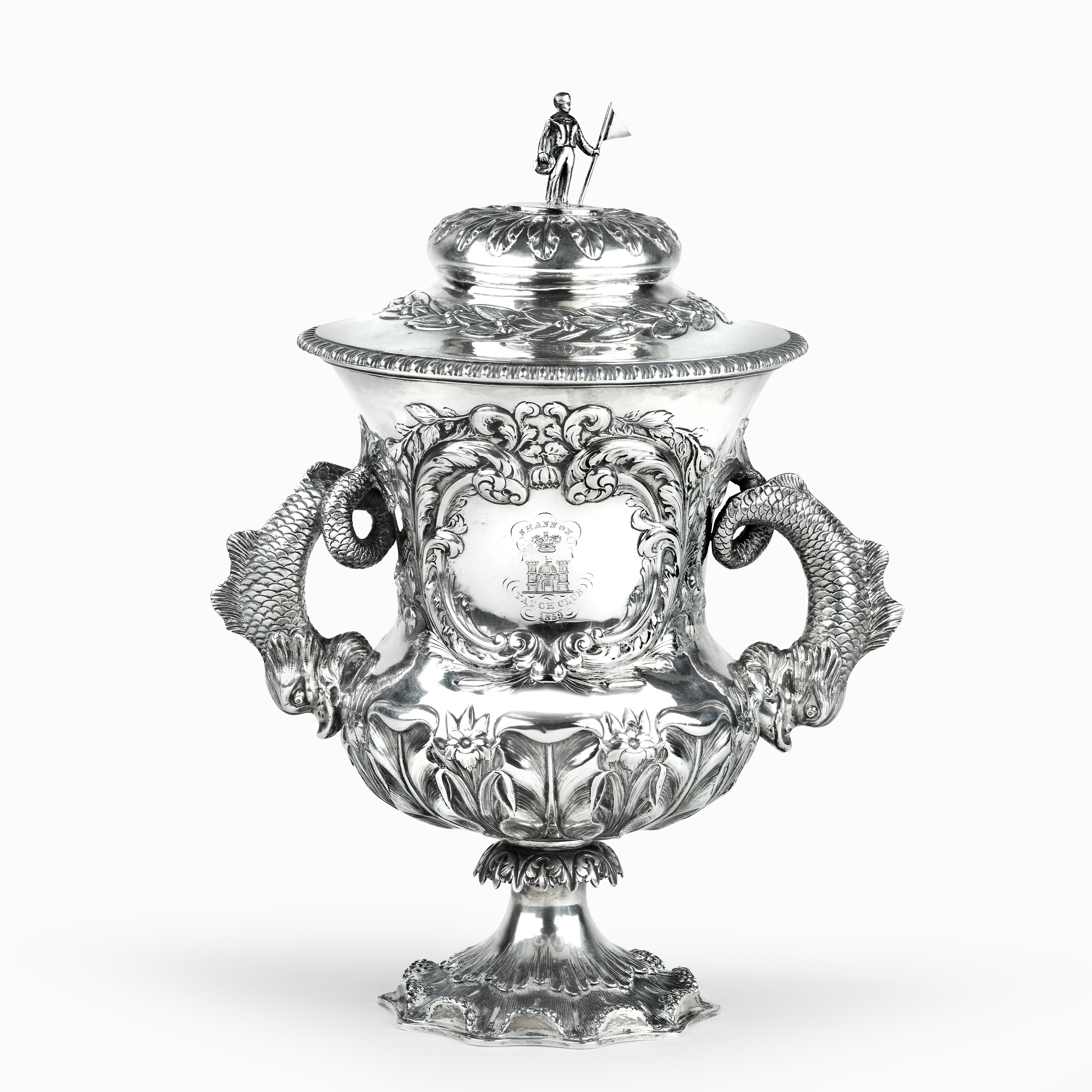 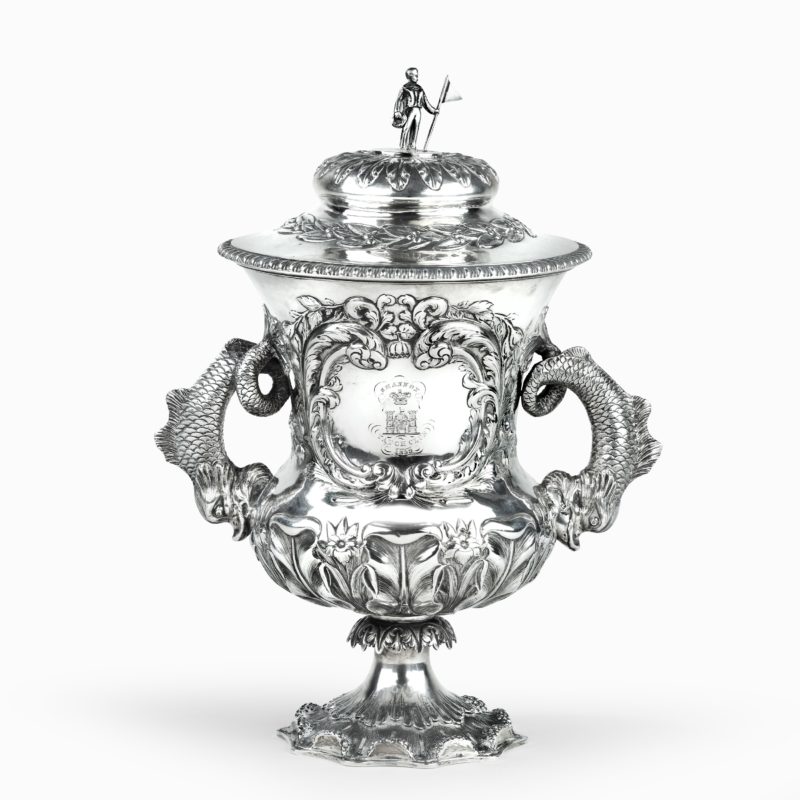 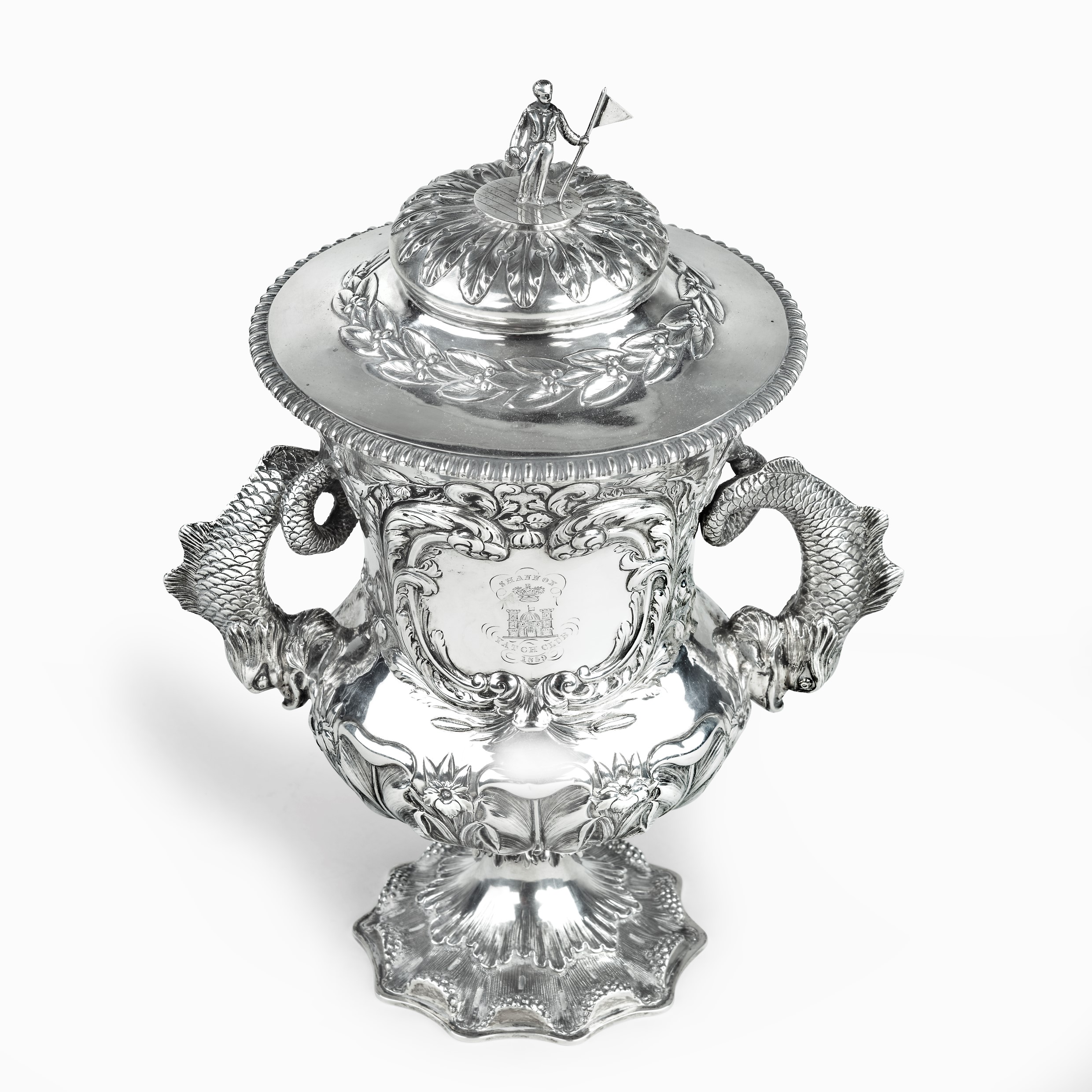 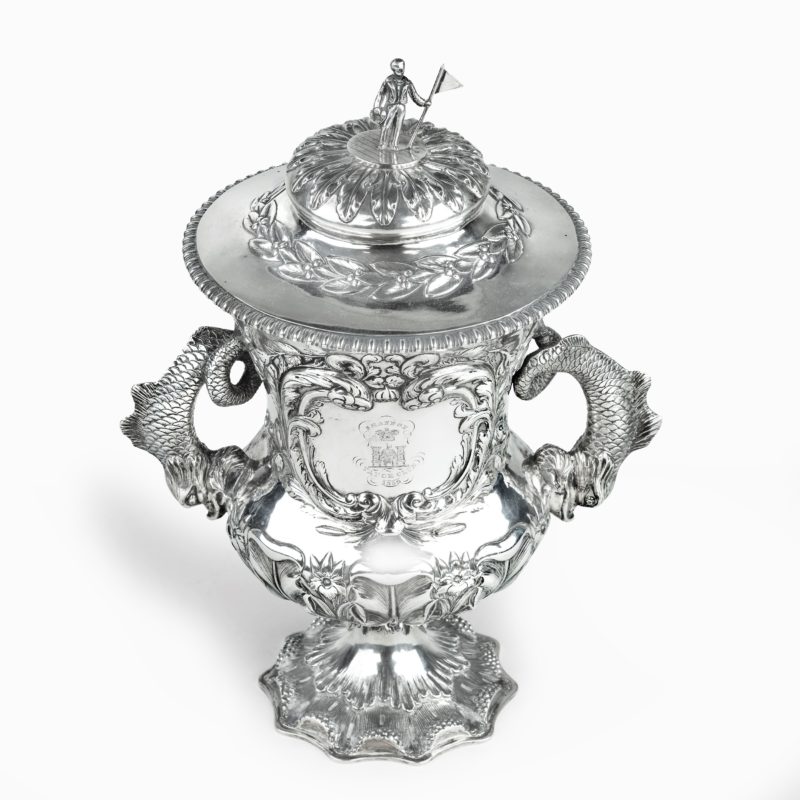 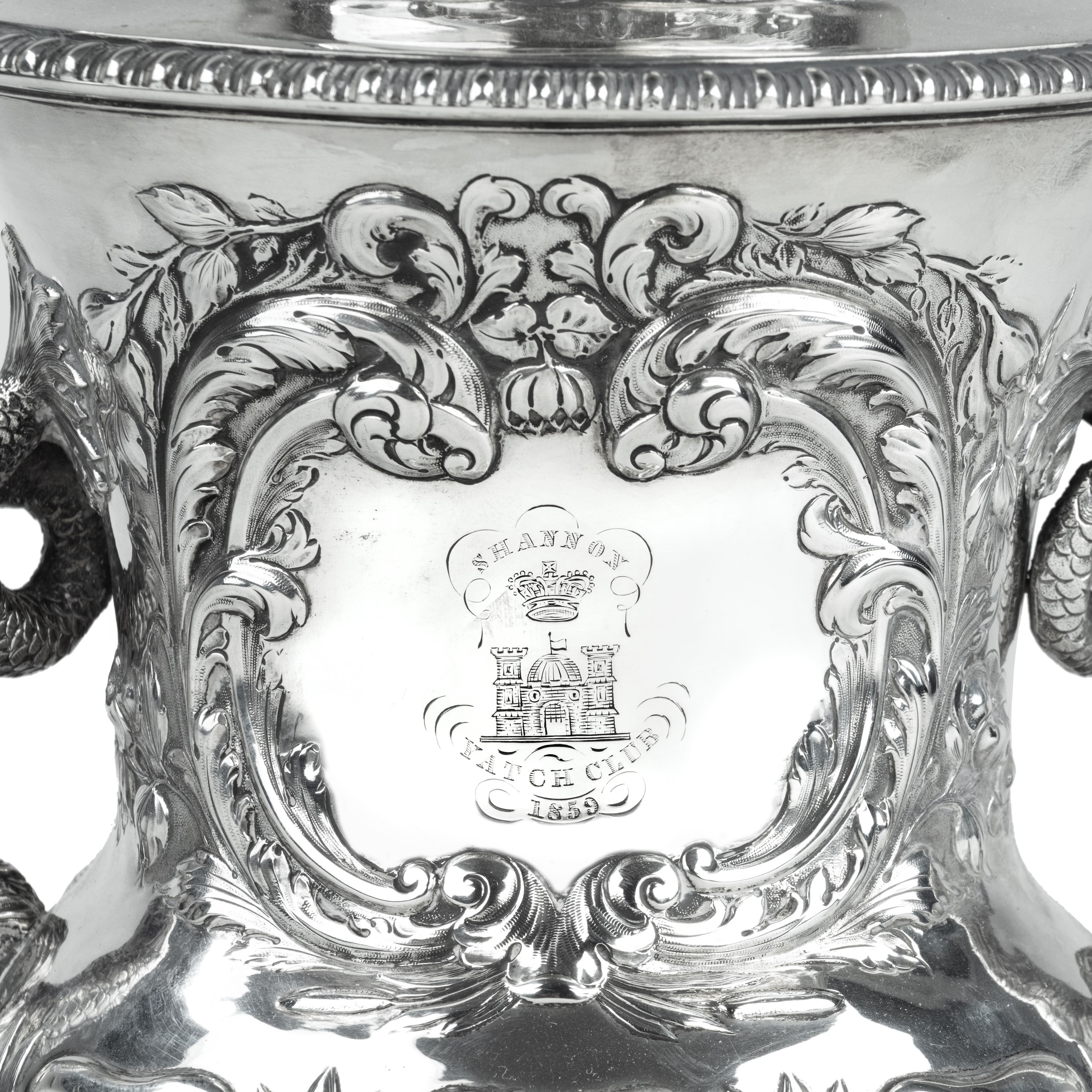 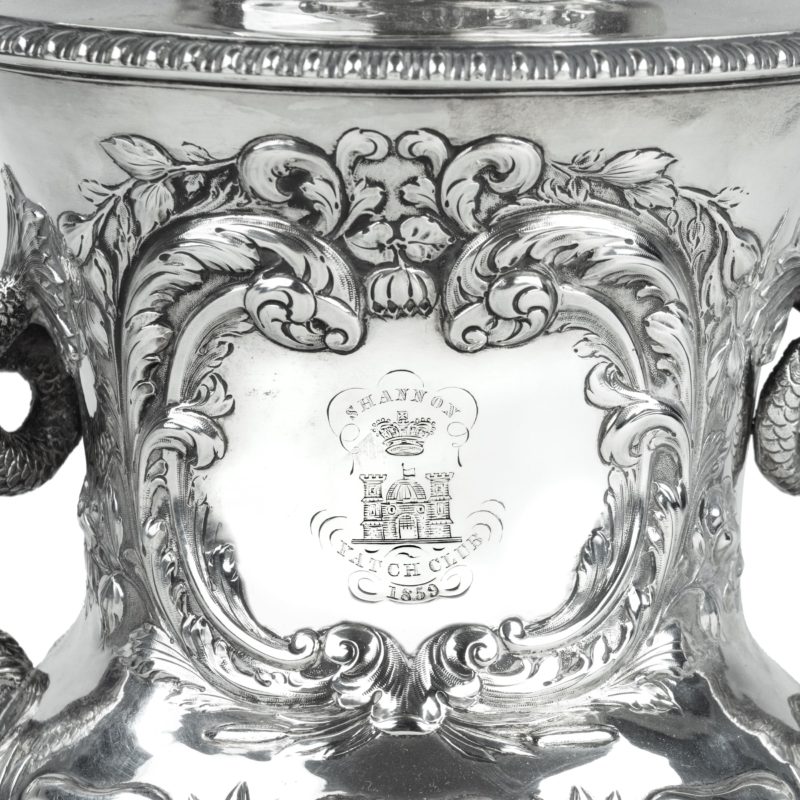 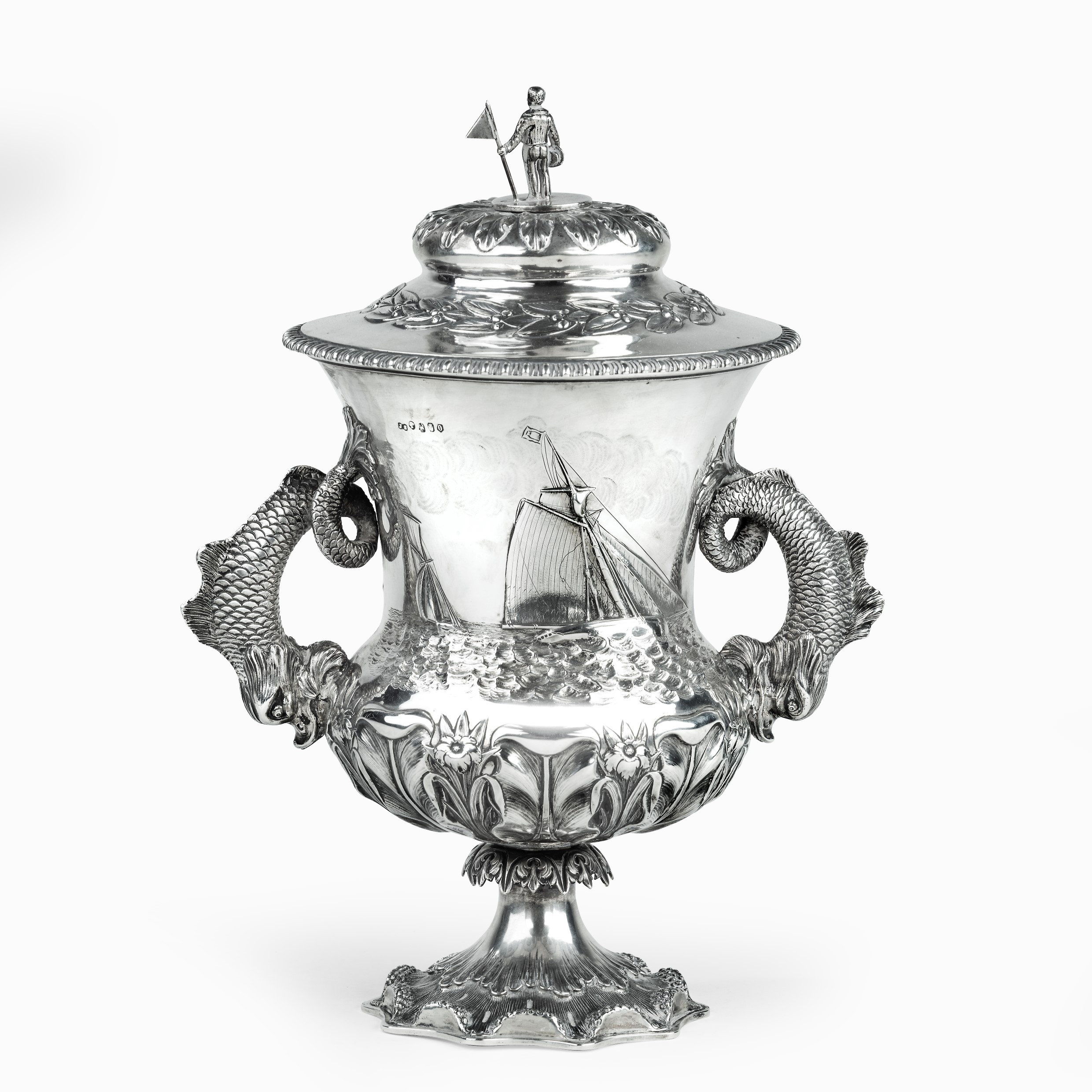 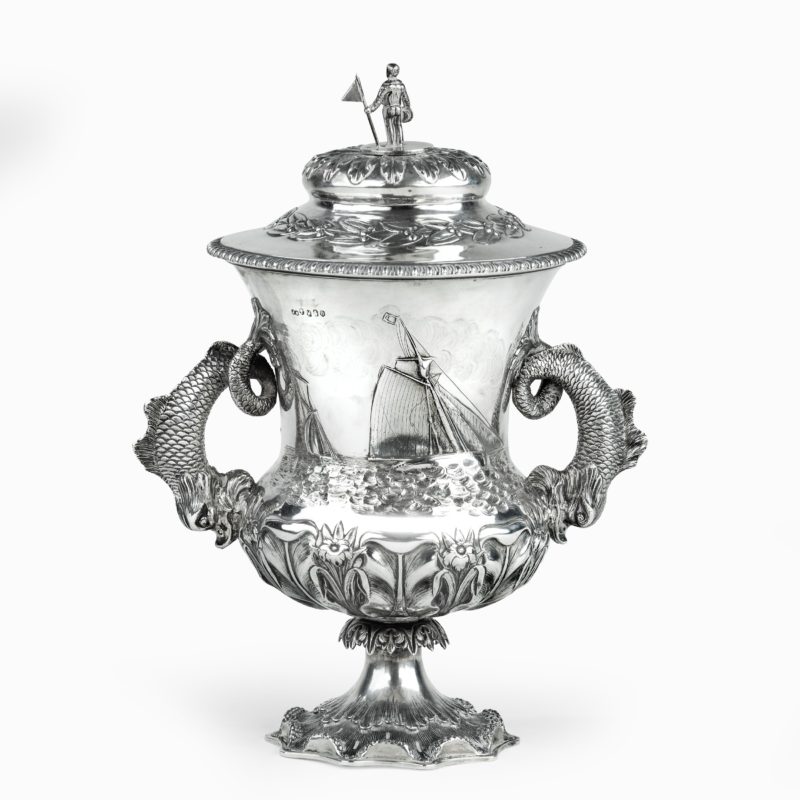 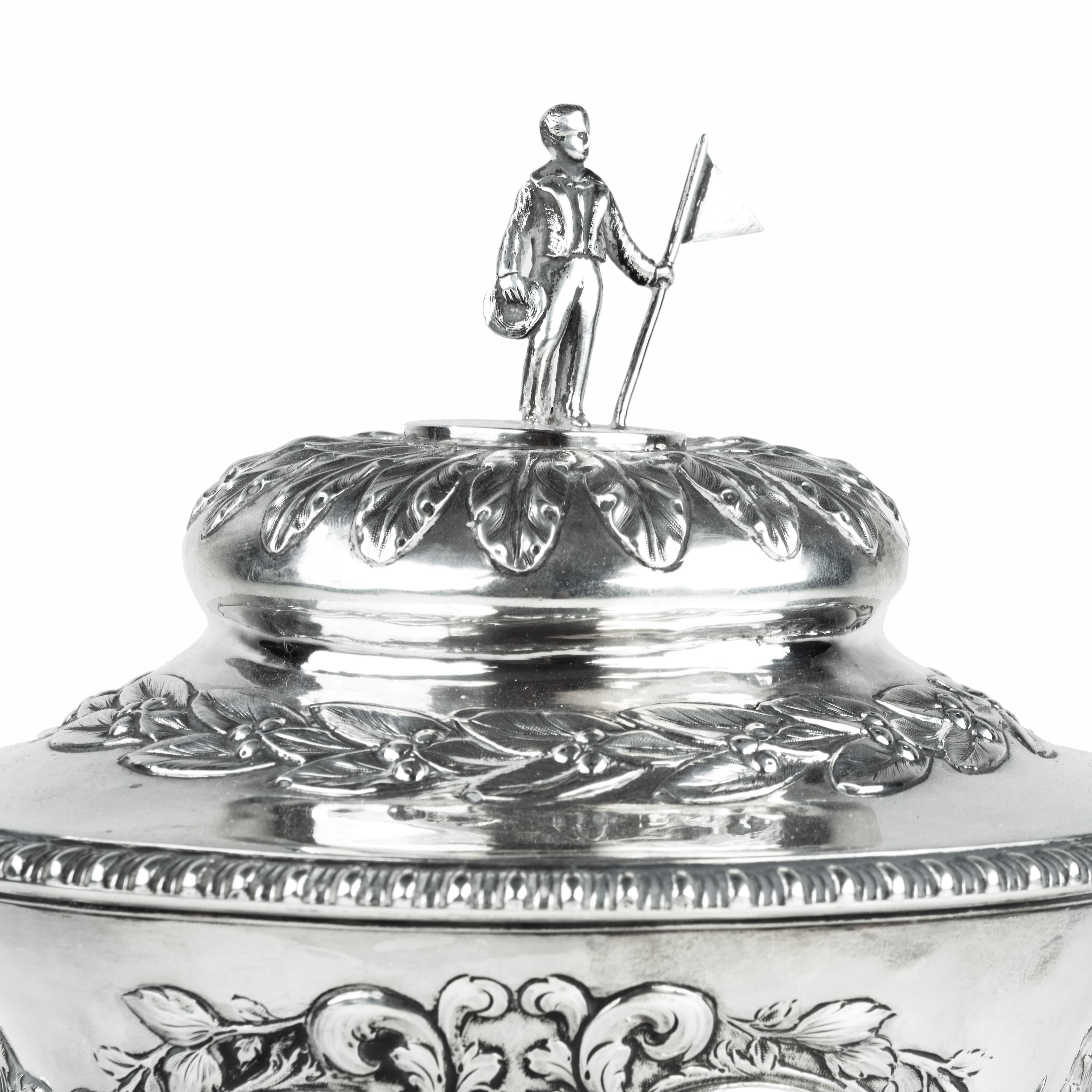 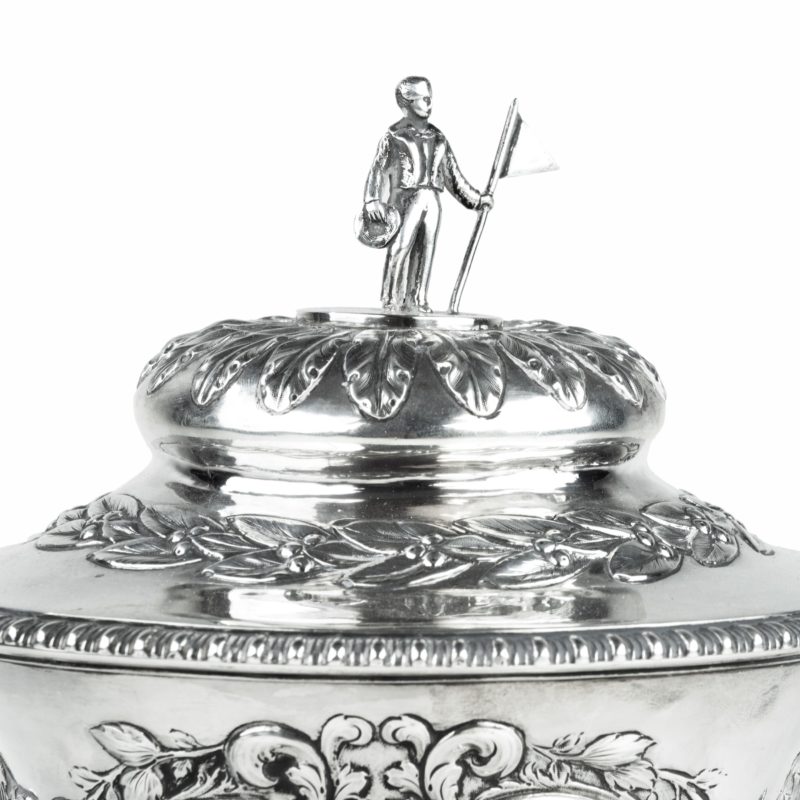 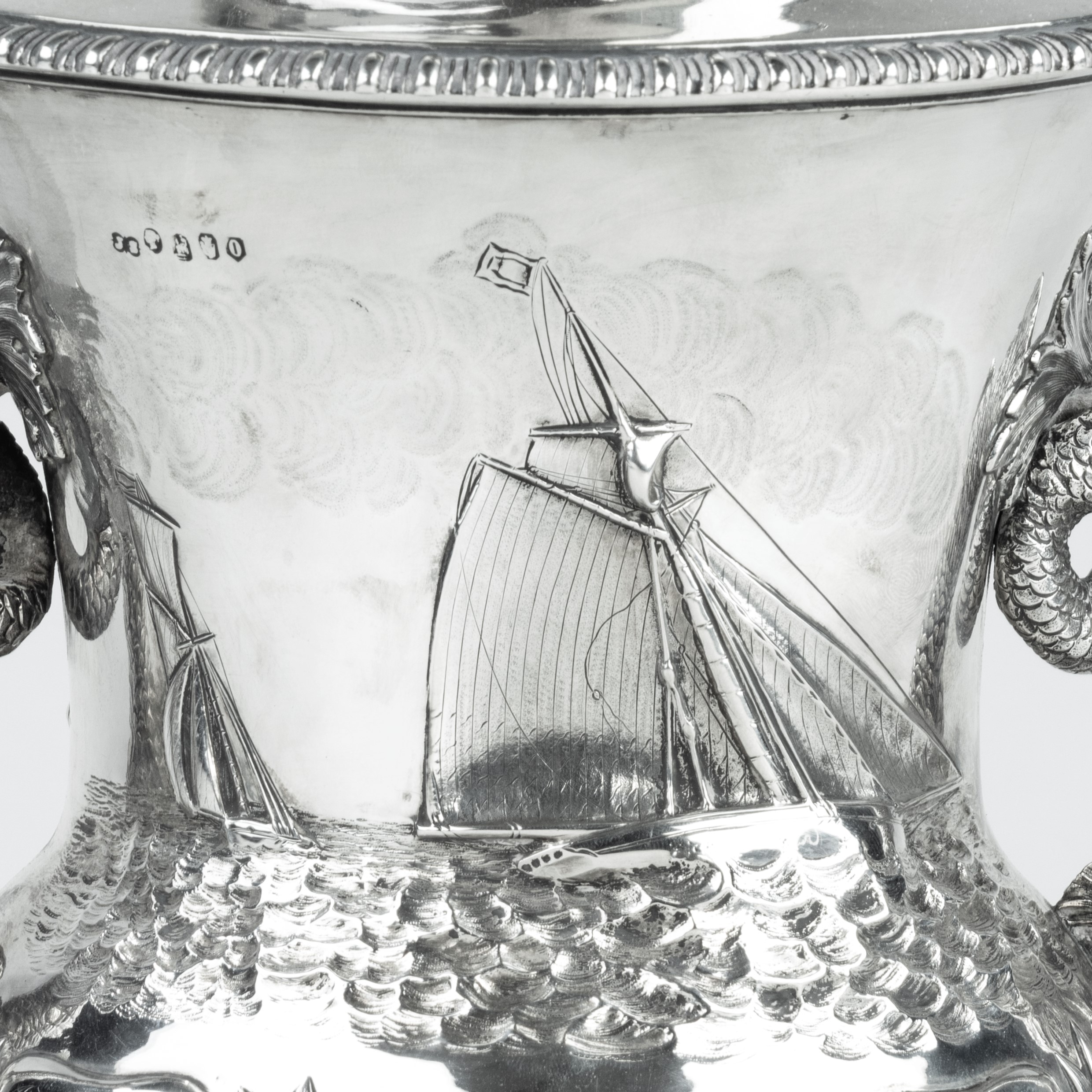 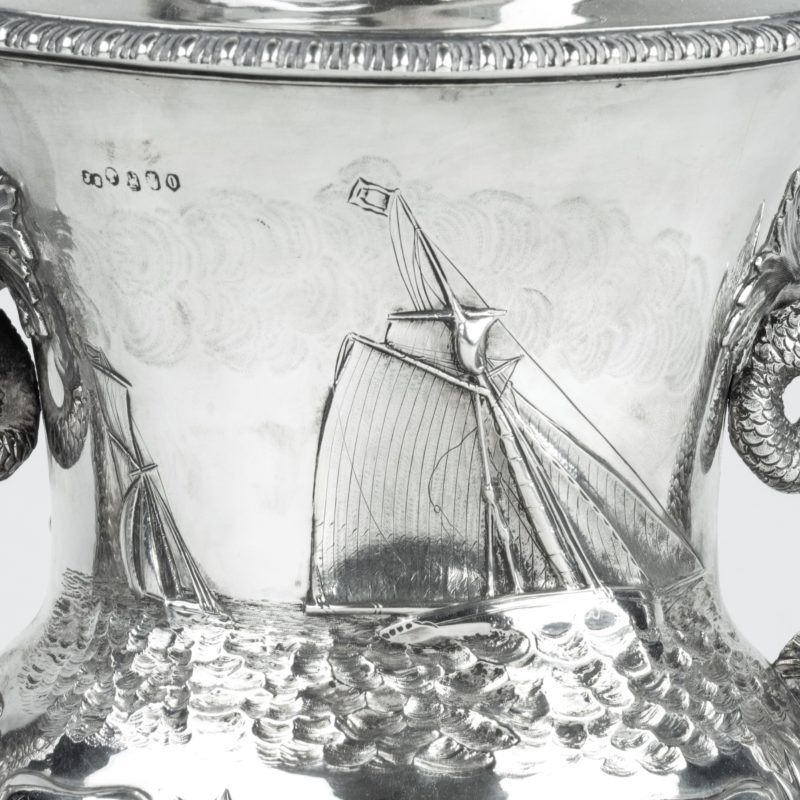 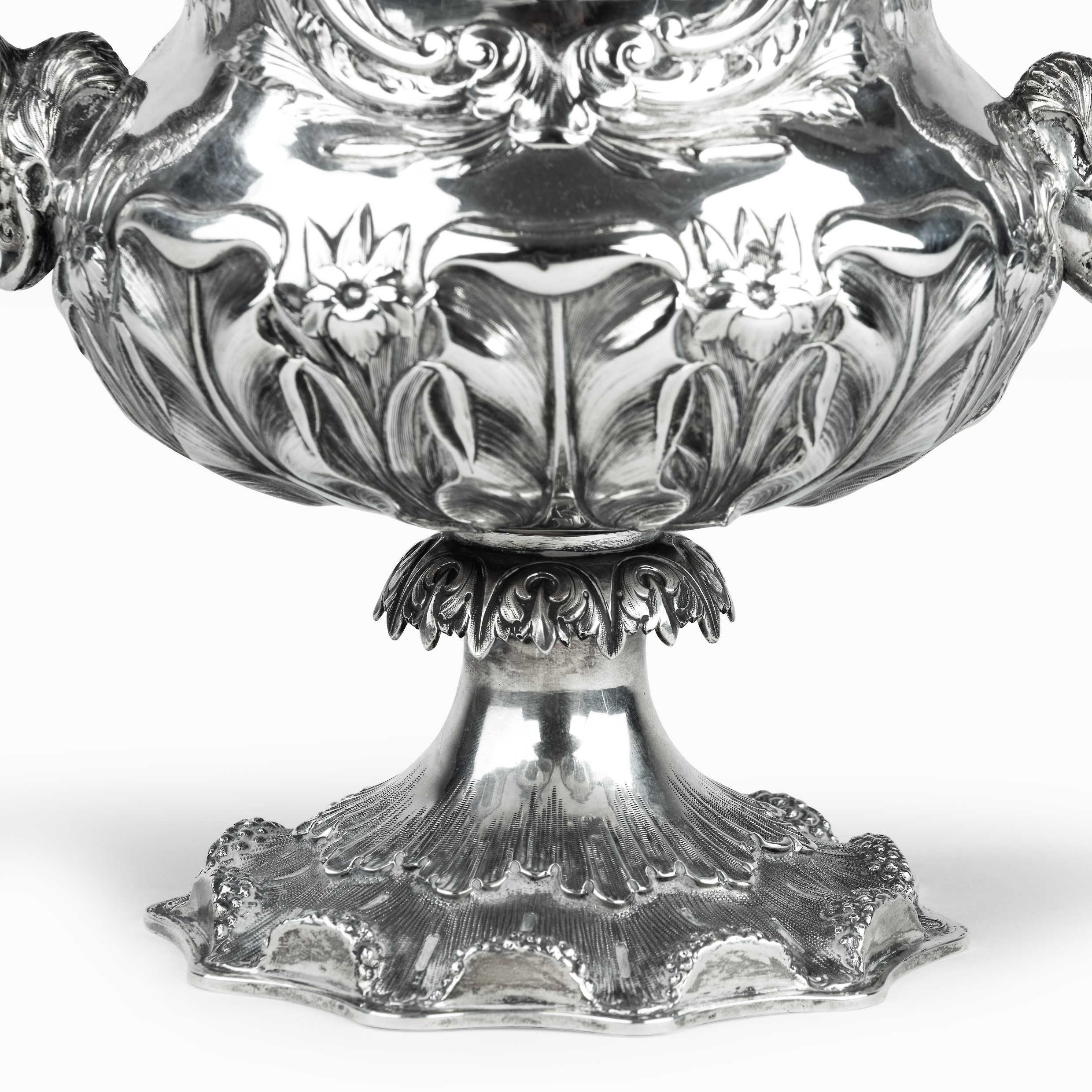 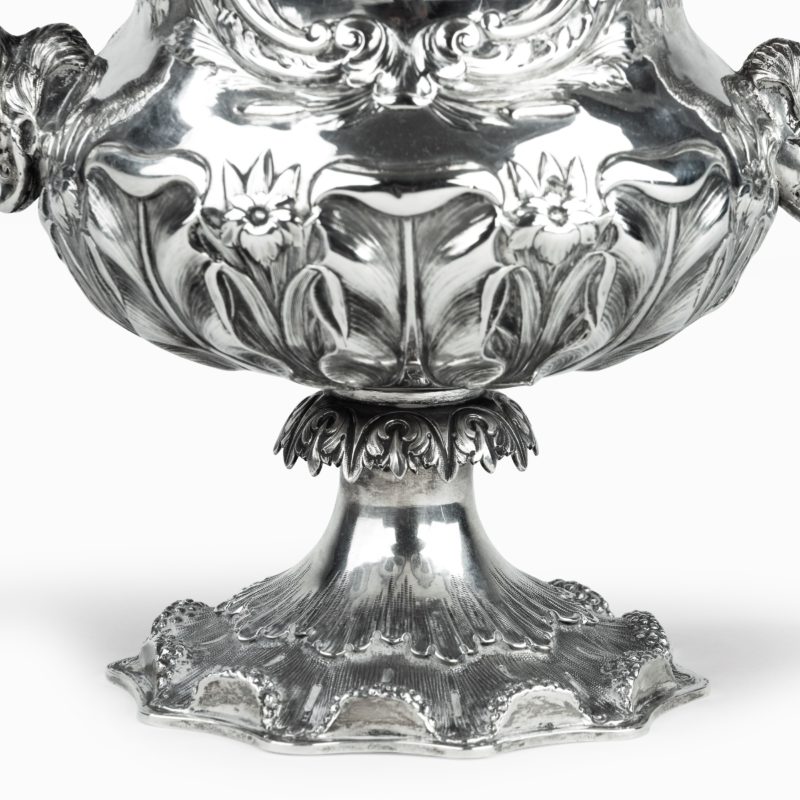 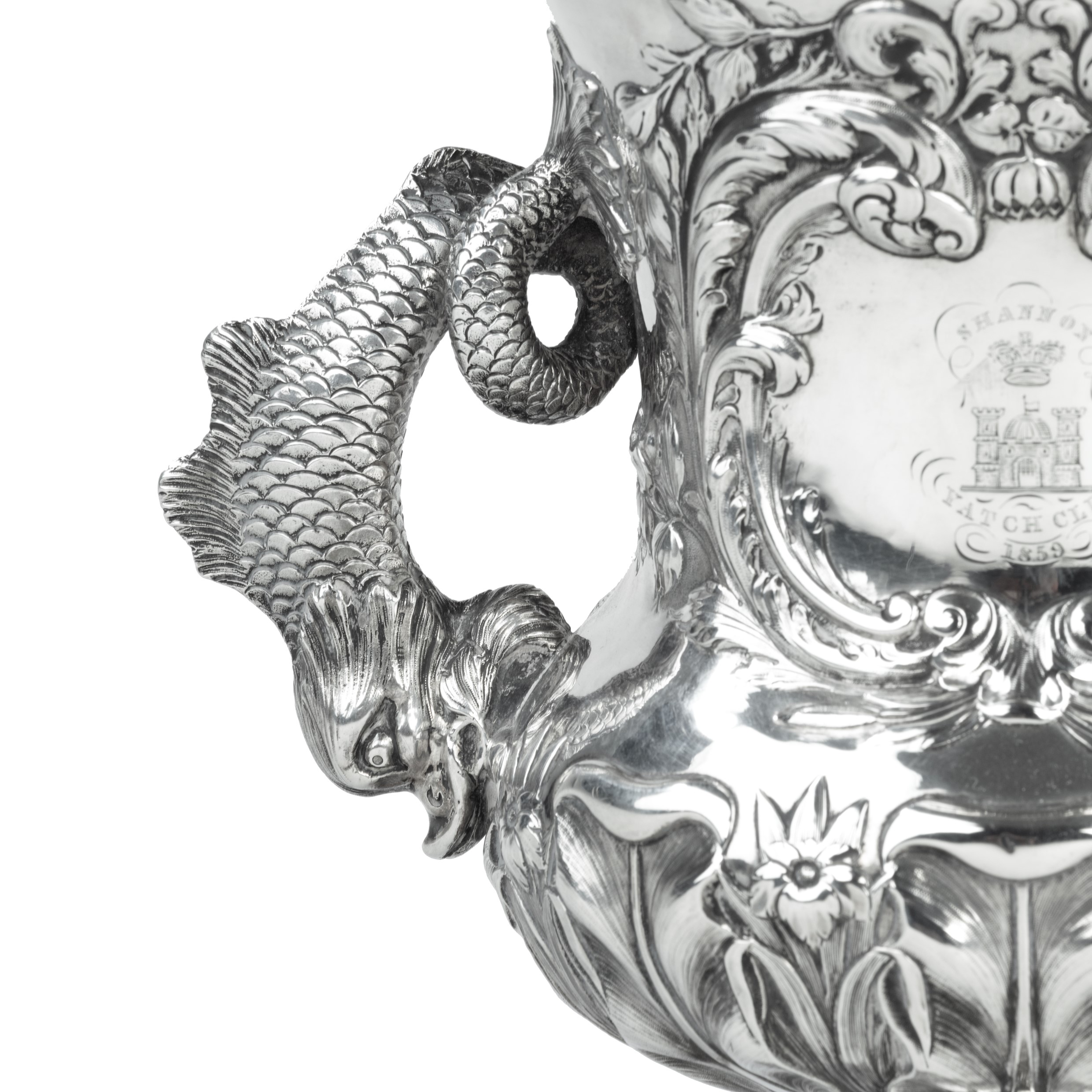 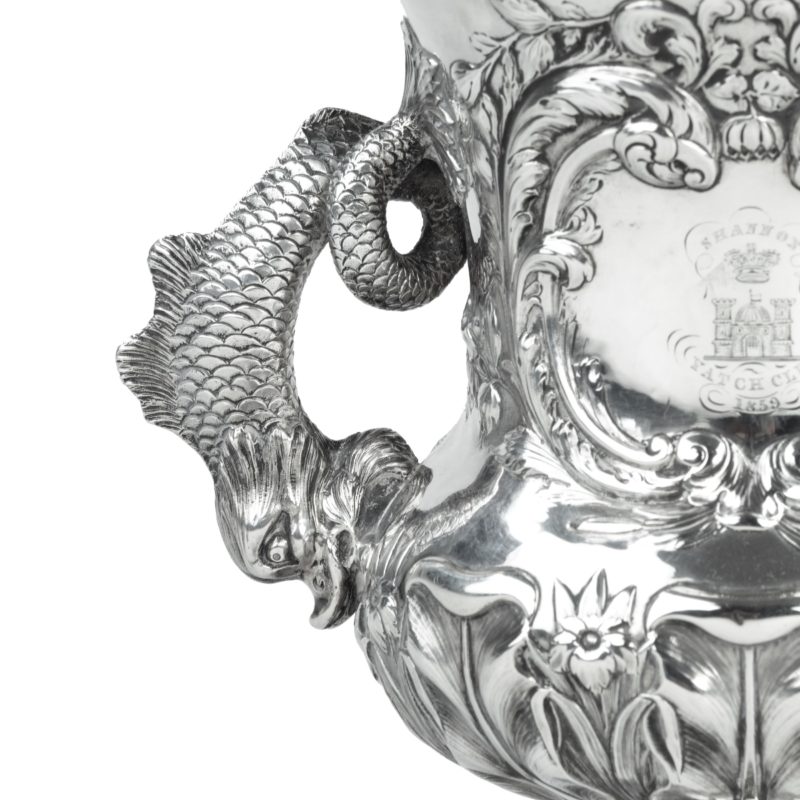 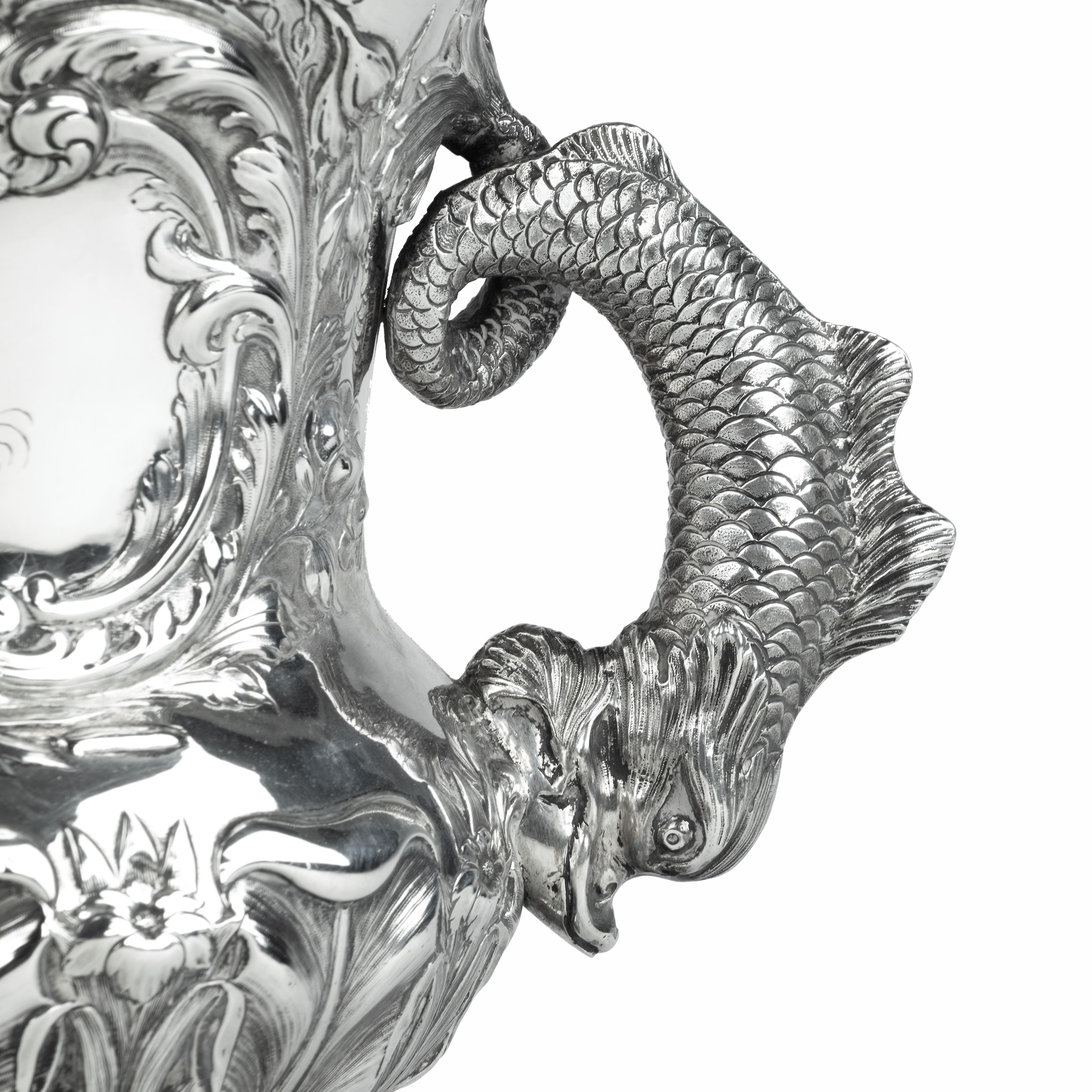 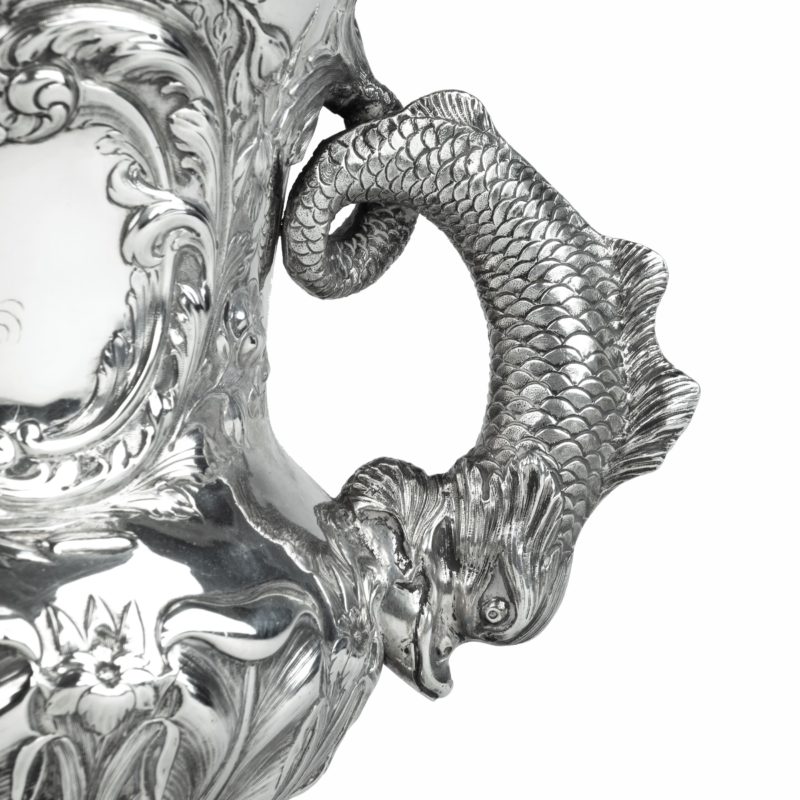 The Shannon Yacht Club silver racing trophy for 1859. This silver cup was made by John Smyth of Dublin (d 1881).  It is embossed and chased with foliate, laurel and rocaille decoration surrounding the badge of the “Shannon Yatch Club” [sic] and dated 1859 on one side.  The other shows gaff-rigged cutters racing.  The handles are designed as downward-facing dolphins with looped tails.  The domed cover is surmounted by a finial in the form of a sailor and pennant with a winner’s laurel wreath round the shoulder.  Irish, 1859.

The crown and castle depict the emblem of the Shannon Yacht Club – the arms of Limerick (the castle) surmounted by the Royal crown.  Permission to use this emblem was granted by the Lord of the Admiralty in the year of the club’s foundation, 1859.  On Tuesday the 26th of July there was a race ‘for a piece of plate presented to the club by the Honourable Secretary’ open to members of any ‘established Yacht Club holding an Admiralty warrant’ and under 10-tons.  Another followed on the Thursday.  On the Saturday the flagship race took place – the Shannon Challenge Cup (valued at £30 10s).  This race was only open to members of the Shannon Yacht Club and was to be contested by yachts of 10 tons and upwards.  Newspaper reports survive and allow us to build a vivid picture of this event.  The Honorary Secretary, Mr Ambrose Hall, entered his 7-ton yachtGem into the first race and finished 3rd out of four entries. For some reason, however, he was also able to enter into the race for the Shannon Challenge Cup, despite his yacht weighing less than the 10 ton entry limit.  According to a report of the time,  Gem ‘was allowed a certain additional time in proportion to her weight’ and she was successful, winning the race and beating the 12-ton Esk and 10-ton Pet in the process.  The subsequent glowing newspaper report described Gem as “beautifully constructed and well-formed for beauty and swiftness”.  There seems to have only been one further Regatta contested in 1860 and then, for some reason, the Club evidently ceased to exist.

Ambrose Hall (1824-1908) was an influential local Limerick man, eventually rising to become Mayor for a year in 1875.  He was a magistrate of some repute and lived at Mignon North Strand (now Clancy Strand).  He was a member of the Limerick Corporation for many years from the early 1860s onwards and a successful businessman.