Pieces by Zobel are rare but of his surviving compositions, most tend to feature pastoral scenes and farmyard animals as they appear to have been the artist’s favoured commercial subjects. The present pair of paintings are much more unusual and feature battle scenes taken from paintings by de Loutherbourg that were in turn engraved for use in the publisher Robert Bowyer’s edition of Hume’s History of England, published in 1804.

The first scene, depicting a knight with a raised axe at the centre, represents King Richard I in Palestine. 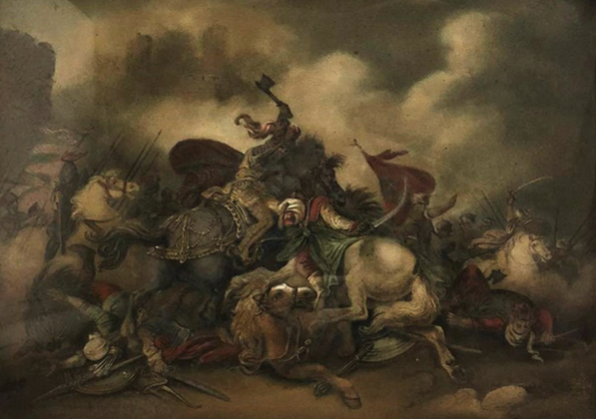 The print upon which this scene is based was made by Anker Smith. There is a fine impression in the British Museum, registration number 1858,1009.117

(Courtesy of the Trustees of the British Museum)

The second scene is an image depicting the Battle of Hastings and this time the printmaker was William Bromley. Again, the BM has a fine impression, registration number 1858,1009.115

(Courtesy of the Trustees of the British Museum) 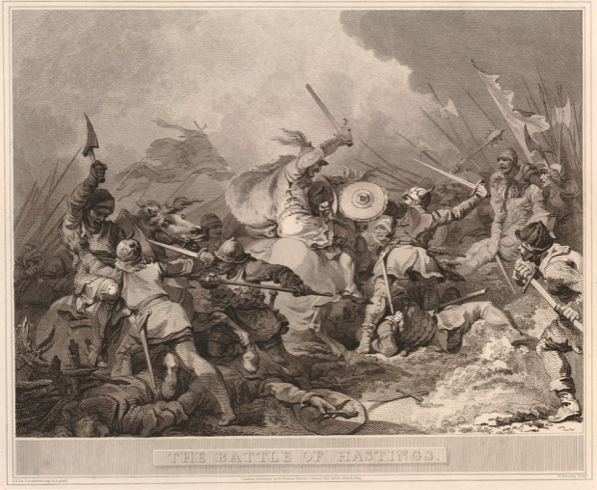 As can be seen in both cases, the quality of the image is extraordinary and it is no surprise that Zobel is recognised as the probable inventor of the particular type of sand painting in which he specialised. Trained as a confectioner in the family firm in Bavaria, Zobel then moved to Amsterdam to study painting before moving to London at the height of the craze for “table decking” where elaborate sugar sculptures were made and painted for the dinner table. After some time working for a wallpaper and fabric design business he was employed at Windsor Castle designing such elaborate table decorations for the Prince Regent. The technique for sifting sugar for these decorations and sand for his pictures was essentially the same and reputedly used a cut and folded playing card as a minute sieve. Zobel was friendly with the great painter George Morland and often used his works as inspiration for his own but these particular scenes and very unusual subjects indeed and are particularly well executed.

Philip de Loutherbourg was born into a family of painters in France and won great aclaim in England as a history painter in particular. He was elected a Fellow of the Royal Academy in 1801 and in 1807 was titled “Historical Painter to the Duke of Gloucester”.