James Peake “The Modern Grinling Gibbons” and his masterpiece 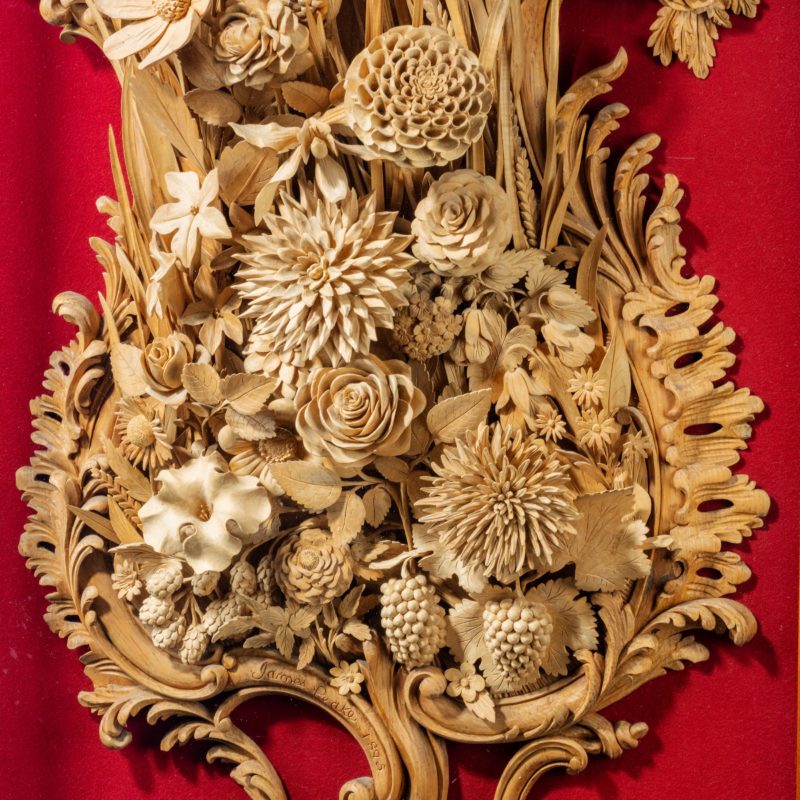 An exceptional carved lime and soft wood plaque by the carver James Peake, signed and dated 1895

James Peake “The Modern Grinling Gibbons” and his masterpiece

Last year marked 300 years since the death of the great Grinling Gibbons, regarded by many as the finest wood carver who worked in England. At the same time as the Gibbons exhibition was drawing crowds to Compton Verney, we were working on researching an exquisite wood carving signed by James Peake. Peake was not a name that was familiar to us and the level of knowledge of his work can be summed up by his entry in BIFMO (the British and Irish Furniture Makers Online database) which simply reads:

As we were to discover, however, Peake was a master craftsman with some very interesting commissions to his name.

James Peake (c.1838-1918) seems to have established himself in trade as a carver, gilder picture frame maker and mount cutter in 1866-this information coming from a surviving label attached to a pair of mirrors that appeared at auction several years ago. He worked from various addresses in the Waterloo and Lambeth area with his 276 Waterloo Road address being the site of his workshop at the time that his most famous surviving work was produced.

An article from the Brixton Free Press, published c.1914, quotes Peake talking about the time that he visited Archbishop Temple at Lambeth Palace. Apparently ‘the Archbishop was so affected when examining a piece of his carving that he stood steadfastly staring at it for about ten minutes without saying a word, is eyes searching every detail. The first words he said were “You are the living Grindling (sic) Gibbons”’. Carvings by Peake are reputed to remain in Lambeth Palace to this day.

In March of 1899, Peake exhibited some of his floral carvings at the Catford and District Natural History Society. A report from the Kentish Mercury, dated the 24th of March, stated:

‘Mr Peake’s wood carving, and especially his groups of fruit and flowers, formed an especially attractive feature. Botanists who inspected the work expressed warm admiration of the truthfulness to nature, exquisite delicacy of execution and artistic taste displayed in grouping.’

Looking at our piece, which may well have been one of those exhibited at that time, it is clear that Peake was not only a wood carver of immense skill but also a very talented designer. The cartouche used to frame the back of this piece is very much in the Chippendale style but, unlike so many rococo revival pieces, Peake manages to stay true to the exuberance of the 18th century rococo whilst also exhibiting a 19th century desire to depict the botanical specimens with near-forensic accuracy.

Peake was clearly “antiquarian” in his tastes, as demonstrated by the fact that he purchased all the old oak from Kennington Palace when it was demolished and used it to carve fine picture frames. He also taught students the art of carving and won a bronze medal at the 1900 Exposition Universelle in Paris for a fine carved mantelpiece that was still in his shop in 1904 when the South London Free Press visited:

‘While I was waiting for a bus one day this week I was attracted to the window of Mr James Peake, 276 Westminster Bridge Road, by some wood carving of the most delicate and exquisite description, obviously the work of true genius and creative artistic skill of the highest order. Up stairs I found Mr Peake himself beside a mantelpiece which won the prize medal at the Paris Exhibition of 1900. This carving is of such extraordinary beauty that a mere bald description could not possibly convey an idea of it, but I wish my readers, particularly those interested in works of art, would go and see it themselves. The festoons of flowers look absolutely real but dipped in oak colour. Another mantel, but of Jacobean style, is carved in beautiful lines. I cannot understand why either of them-the former especially-has been permitted to remain in this workshop. When Kennington Palace, interesting as the home of Edward the Black Prince, was demolished some time ago, Mr Peake bought all the oak in it, and is using it for picture frames etc., which thus have a double interest. One which I saw is carved as only a master hand could carve such seasoned oak. Mr Peake is a professor in wood carving and has many pupils eager to learn the intricacies of the work, and who soon get the artist’s fire in their blood  as they see the flowers and fruit grow and come to life under their hands.’

What is interesting is that the wonderful carving we have-which was displayed framed in Peake’s own shop-appears to have been designed purely in his free time as a demonstration of his talents and to prompt visitors to place orders of their own. When Peake was interviewed by the Brixton Free Press in c.1913 the paper photographed our carving in his shop and stated that it was ‘a wonderful shield, the carving of which occupied the artist’s “leisure” hours for four months. He describes it as a labour of love’. Unlike with the mantelpiece described above, there is no suggestion that the carving was ever for sale.

The carving is also illustrated and described in an edition of The Journal of the Society of Estate Clerks of Works published at around the same time. There the carving is described as follows:

‘is the art of wood carving becoming extinct? Many persons would have us believe so, who shake their heads and mention Grindling (sic) Gibbons with a sigh. The illustration is, however, a case in point to prove that the talent for wood carving is still in existence; it represents a shield upon which a group of flowers is mounted, and is undoubtedly a marvellous piece of workmanship. It was designed and executed by Mr James Peake, of Westminster Bridge Road, a working carver, and who says it was commenced and finished within four months, and in his leisure hours only”’.

Even after Peake’s death, the carving was still viewed as a masterpiece. The Brixton Free Press, claiming credit for “discovering” Peake in its earlier article, refers to the master once again in a piece dated the 30th of May 1924. By this stage the piece had entered the possession of “Mrs Wyatt a former member of the Borough Council and widow of the late coroner for Brixton” and she generously presented the carving to the Borough of Lambeth. How the carving left the possession of the borough and came on to the open market is unclear. It appeared at auction in 1986, catalogued as anonymous for some extraordinary reason, despite the obvious date and signature.

This was clearly a master’s masterpiece and is precisely the sort of discovery that excites dealers, researchers and collectors alike and we are delighted to be able to present it for sale. It was chosen by the journalist and art historian Huon Mallalieu as one of his highlights from the LAPADA website recently and is due to be published by Christopher Payne in a forthcoming book on great 19th century furniture and design.

To view this carving in more detail click here