The wonderful Japanese gardens at Cowden Castle in Scotland-frequently referred to as the best Japanese garden in the west-were created by a great partnership between two outstandingly talented and ground-breaking women, both pushing the limits of their roles in society. The first of these two women was Isabella “Ella” Christie (1861-1949), the owner of Cowden Castle, who was a pioneering adventurer, determined to push the boundaries of what was considered normal behaviour for a lady of her social class. She travelled extensively in Asia and met the Dalai Lama on one of her many trips. She was fascinated by travel and was one of the first women admitted as fellows by the Royal Geographical Society. She was fluent in four languages and was keenly interested in other cultures.

On a trip to Japan between 1907 and 1908, Ella formulated plans to introduce a Japanese garden to Cowden. Ella’s father had specifically selected the land to build Cowden due to its suitability for growing trees and his daughter was to introduce very exotic species to the area.

At this point, Ella Christie was fortunate enough to be introduced to Taki Handa, a Japanese garden designer who, though affiliated to the Royal School of Garden Design in Nagoya, was studying at that point at Studeley College in England. Handa was employed for just two months to create the new Japanese garden and, despite it being highly unusual for a female designer to be employed for such a high-profile project at this time, the garden was recognised immediately as a masterpiece of its kind. From the garden’s completion in 1908 until 1925 Professor Suzuki, the Hereditary Head of the Soami School of Imperial Garden Design visited Cowden in person on multiple occasions to prune the trees and shrubs. Many of the gardeners entrusted with the everyday maintenance of the garden were also Japanese and traditional Japanese garden practices were followed.

We are lucky enough to have a piece of furniture in our stock which has a link to both of these remarkable women. The piece is a wonderful display cabinet, made around 1890 for Ella’s father John Christie. As mentioned before, Mr Christie was a keen arborist and what is particularly wonderful about this cabinet-apart from its design and usefulness-is that it was made from Douglas fir and laburnum trees that were grown on the Cowden estate but brought down by high winds. The use of these unusual timbers is both exotic and a wonderful form of 19th century recycling. The timber was not wasted and, although the Castle itself was sadly demolished in the 1950s, this wonderful cabinet is a link with a great house of the past and a fascinating family of horticulturalists.

Although the cabinet pre-dates Taki Handa’s time at the Castle, it is likely that she would have approved of the family keeping the memories of their trees alive after the storm-quite literally bringing the outside inside at Cowden.

The Cowden cabinet was later owned by the great furniture dealers H.W. Keil of Broadway-a firm that specialised primarily in English oak furniture. Although this piece would have been very different from most of their stock, it shows that for a dealer as well as a client the very best of the best will always work well together in an interior-whether a house or a showroom. We hope that you will feel we have achieved this same effect on our stand at the upcoming Masterpiece fair. The Cowden Castle display cabinet, with a brass plaque recording that the piece was made from trees felled by a storm on the Cowden estate.

The description of the cabinet in the Cowden Castle sale held by Dowell’s of Edinburgh in 1950. 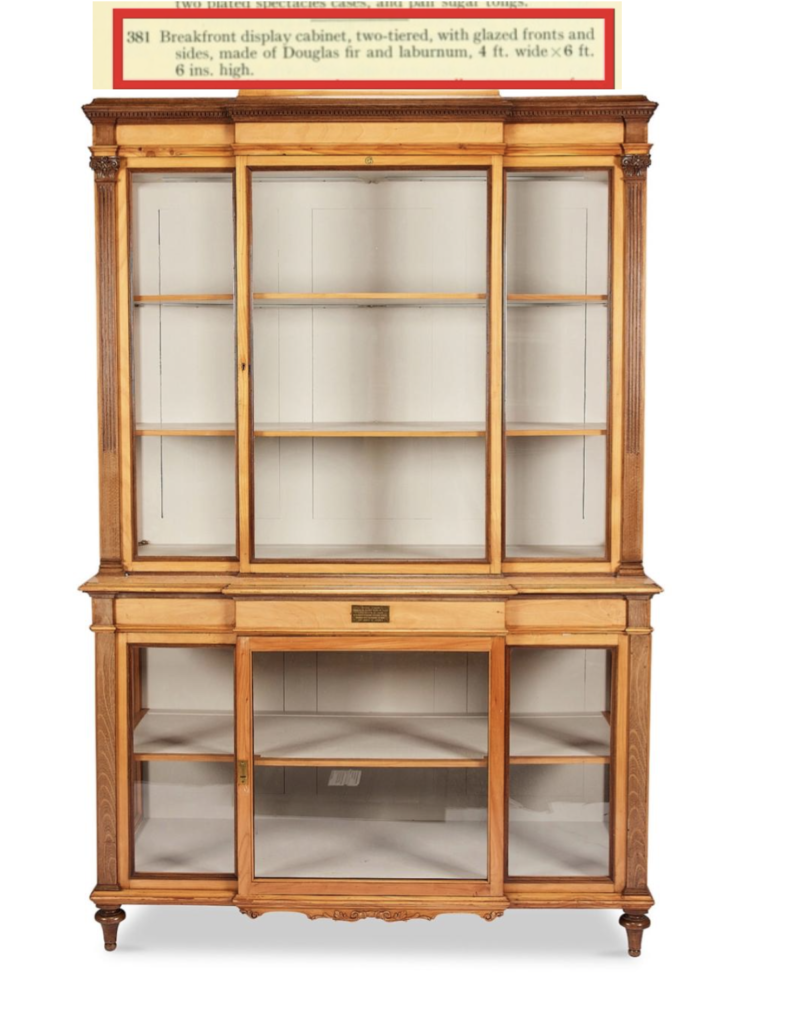