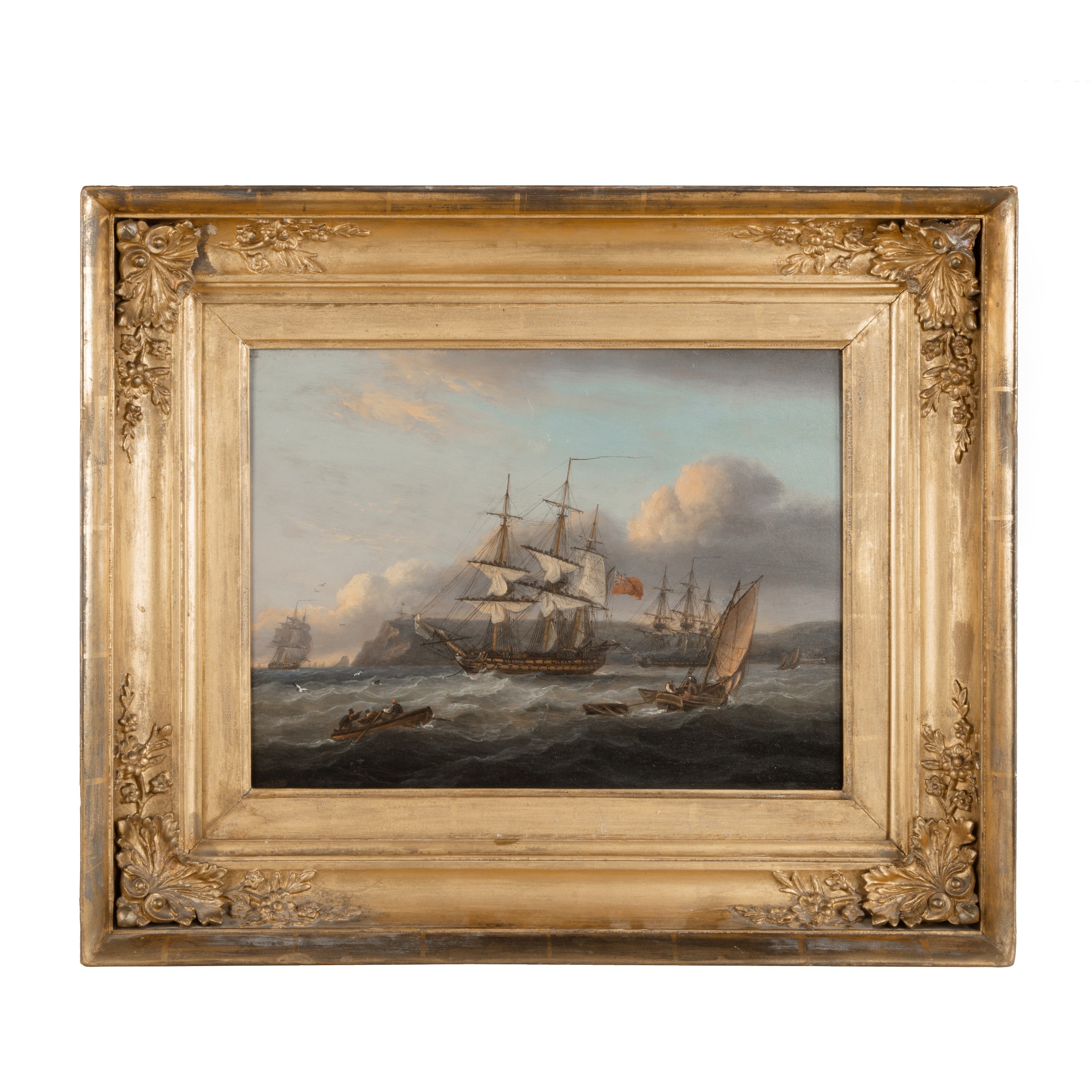 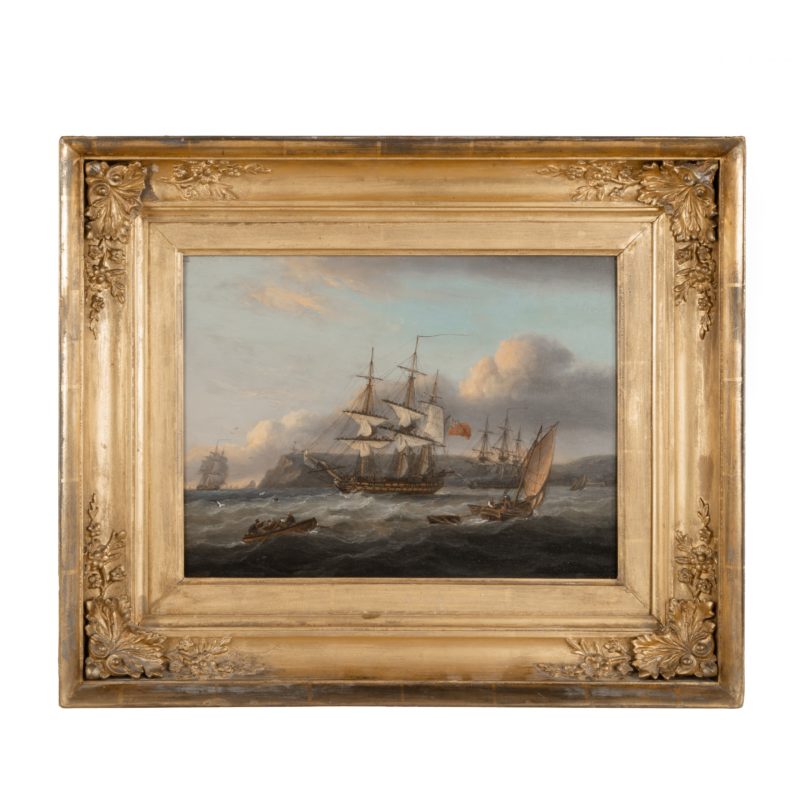 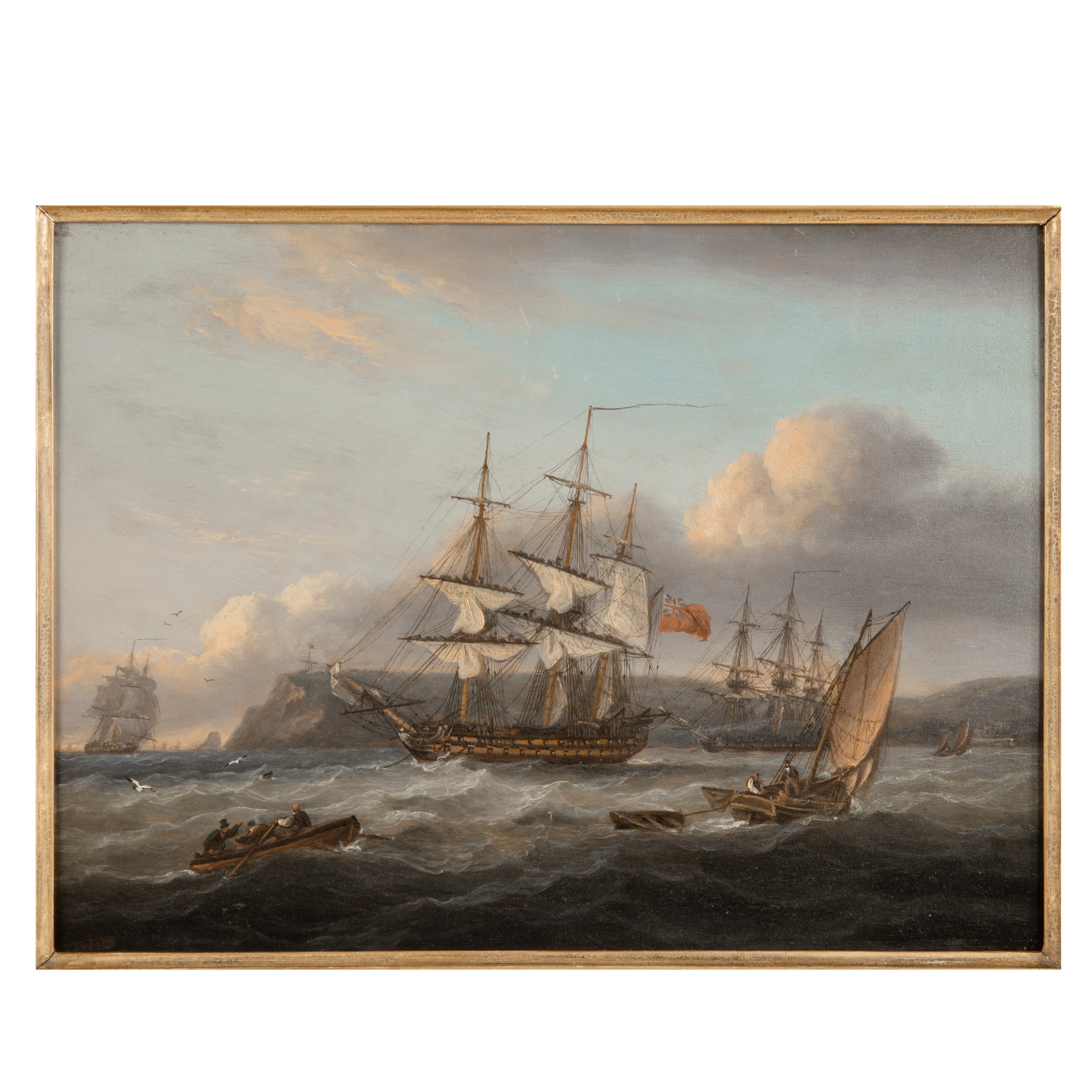 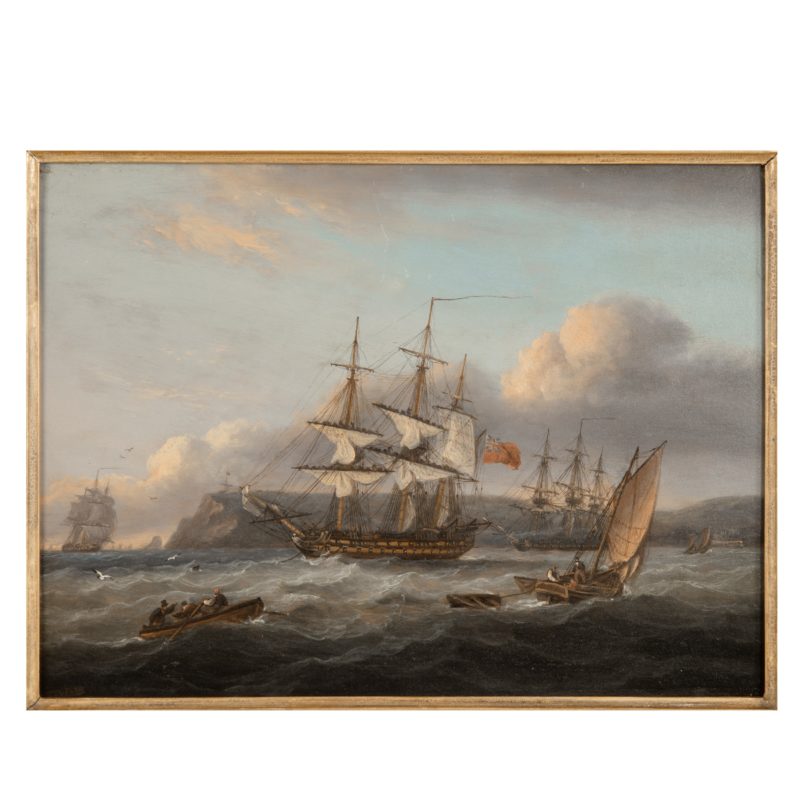 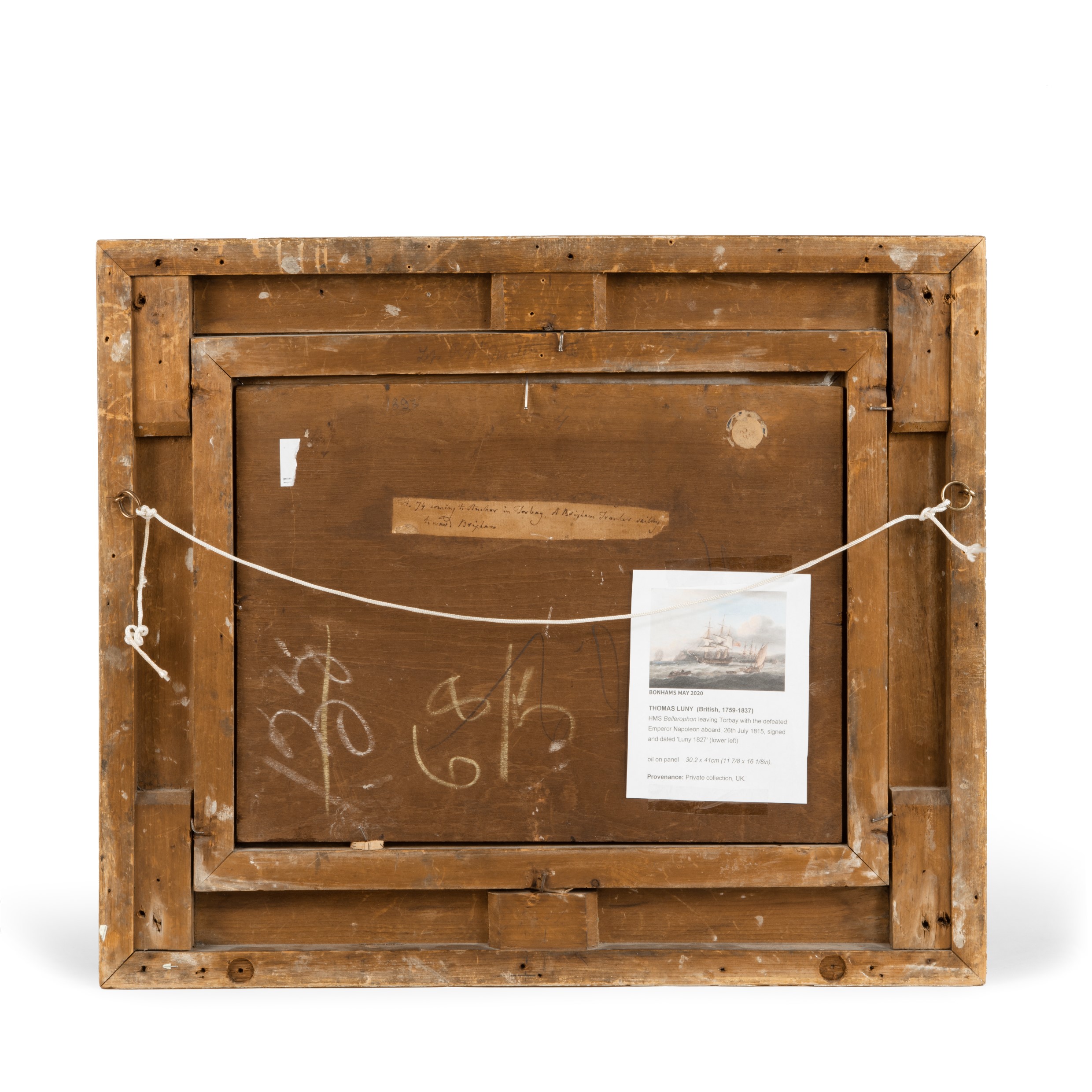 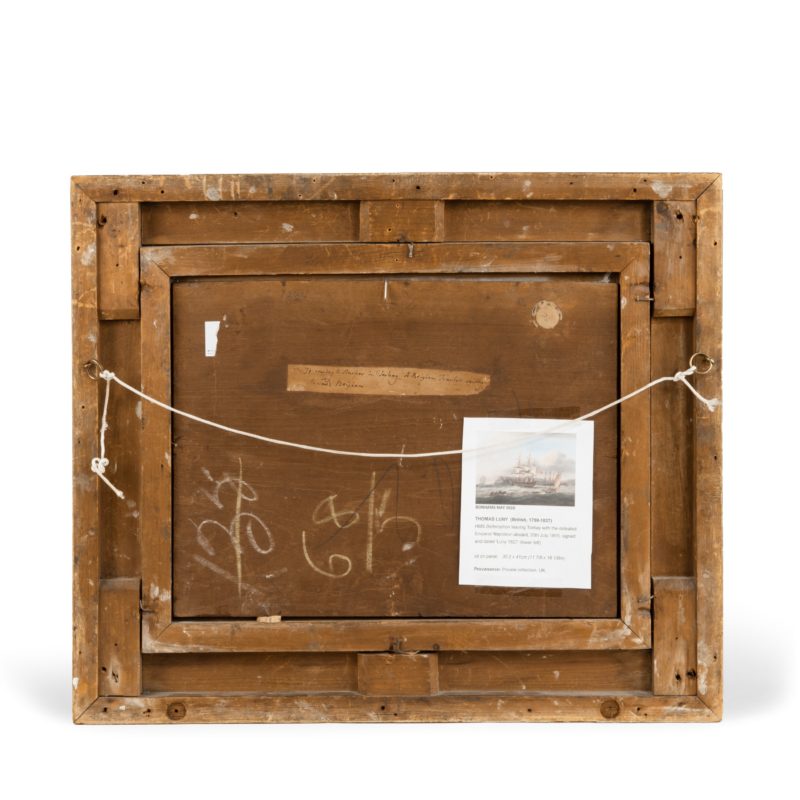 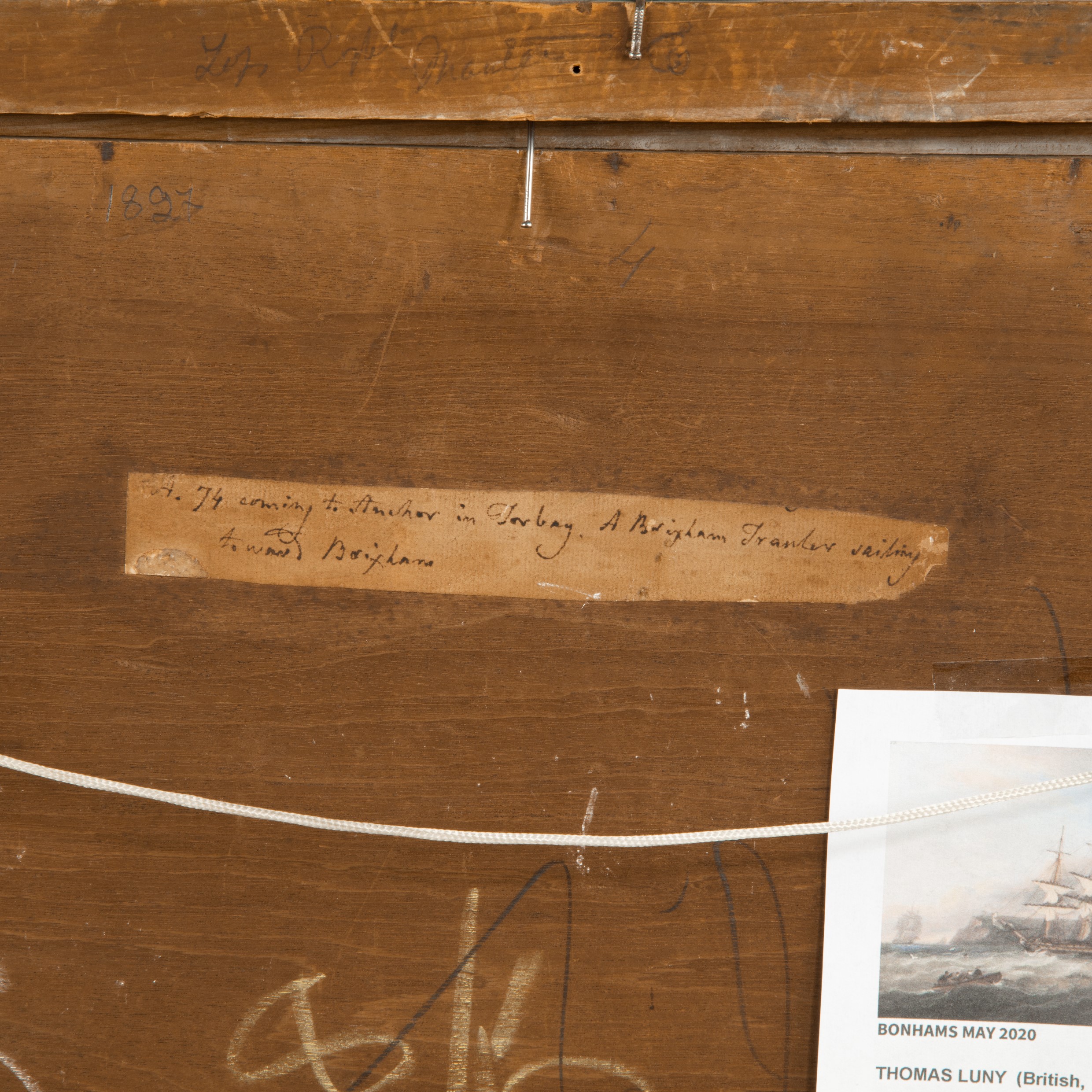 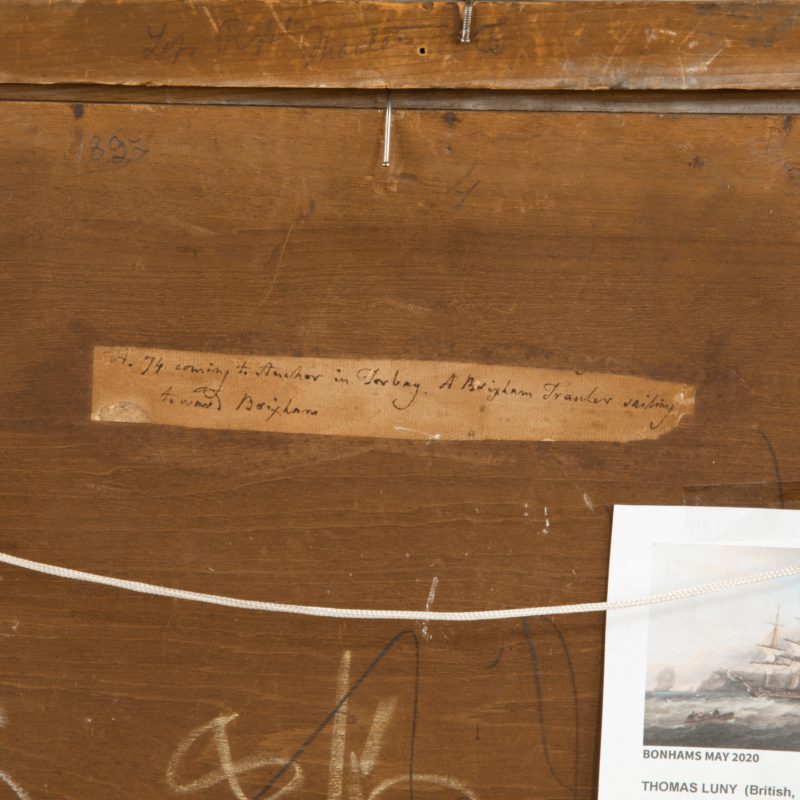 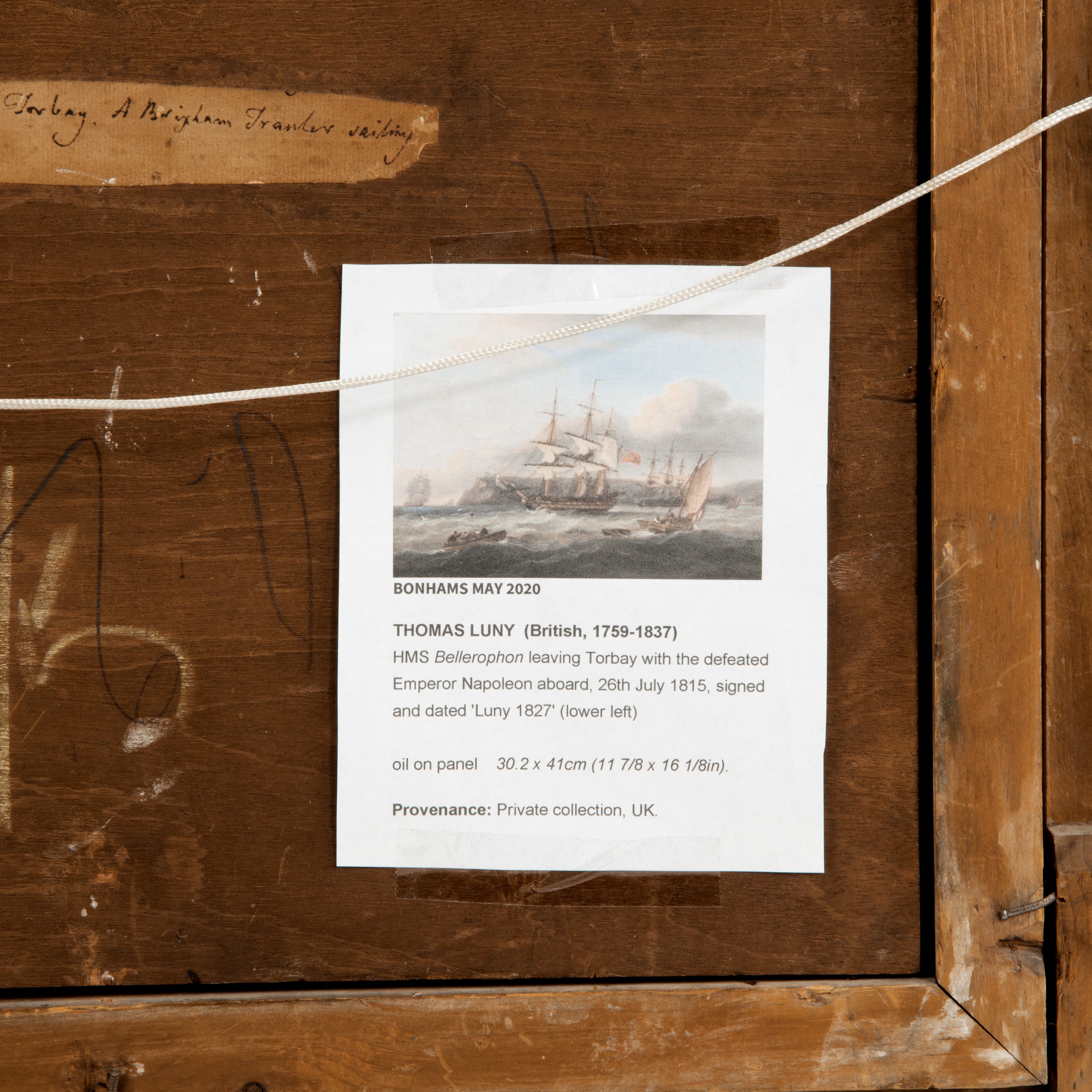 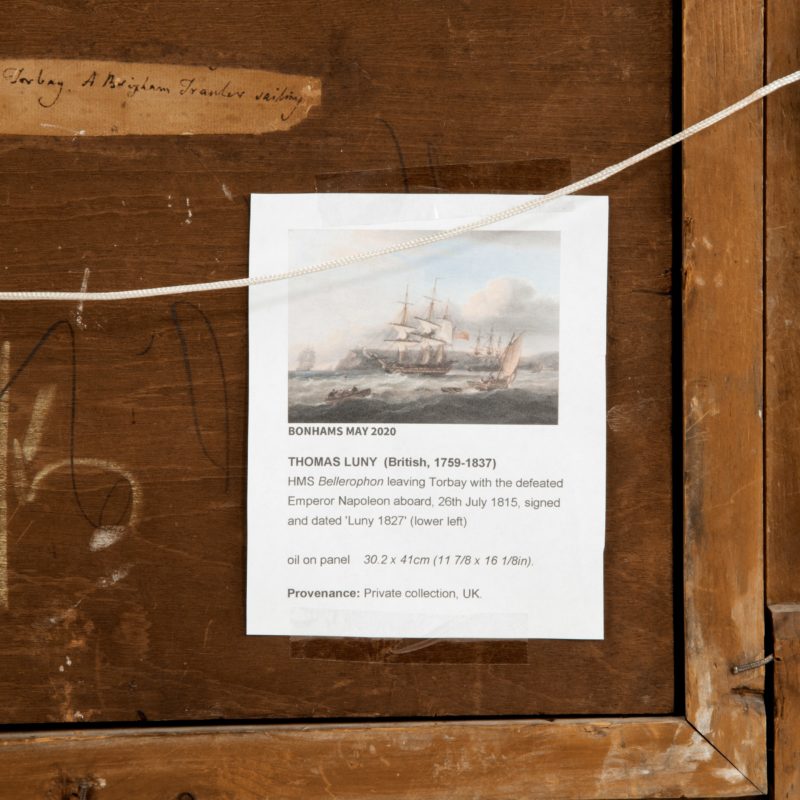 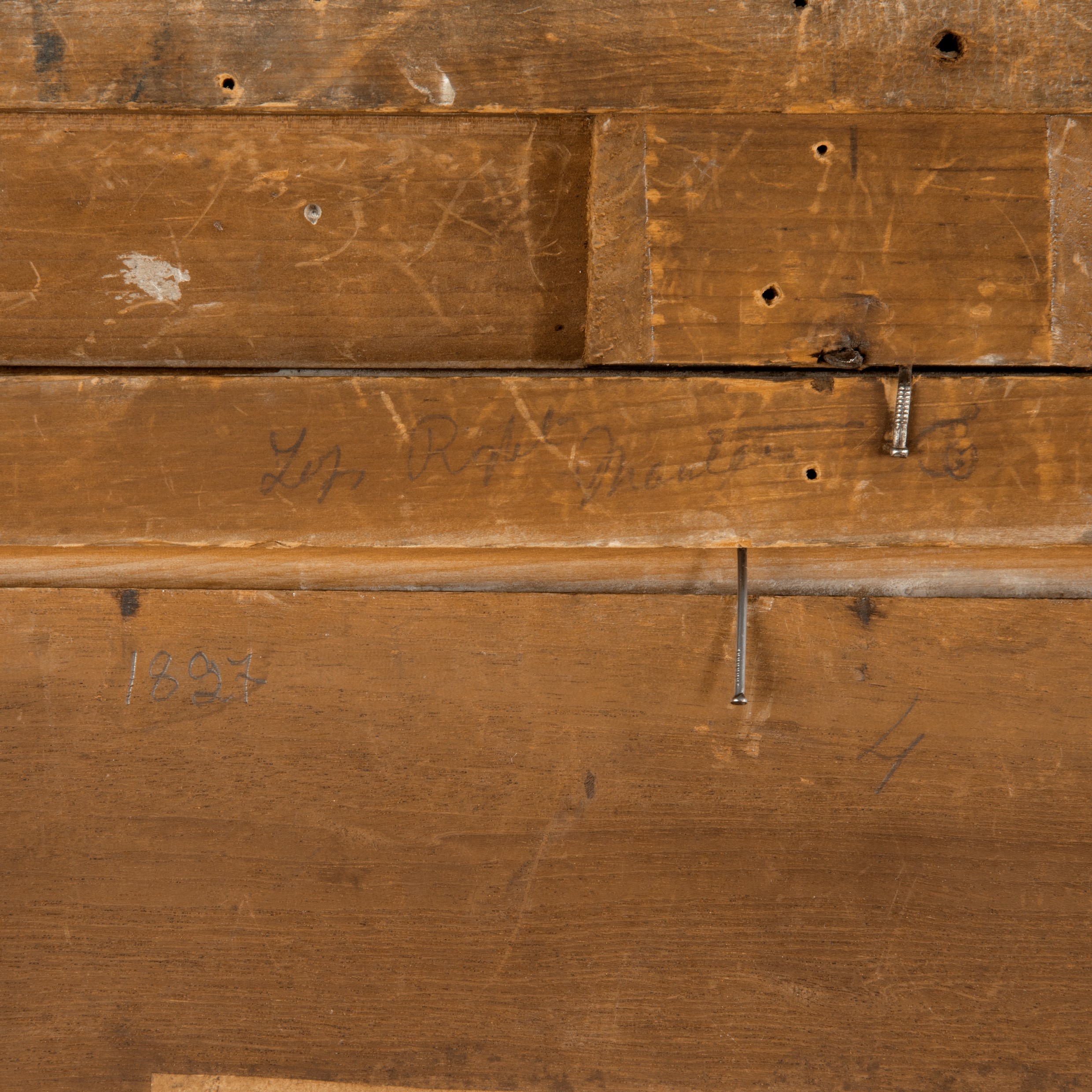 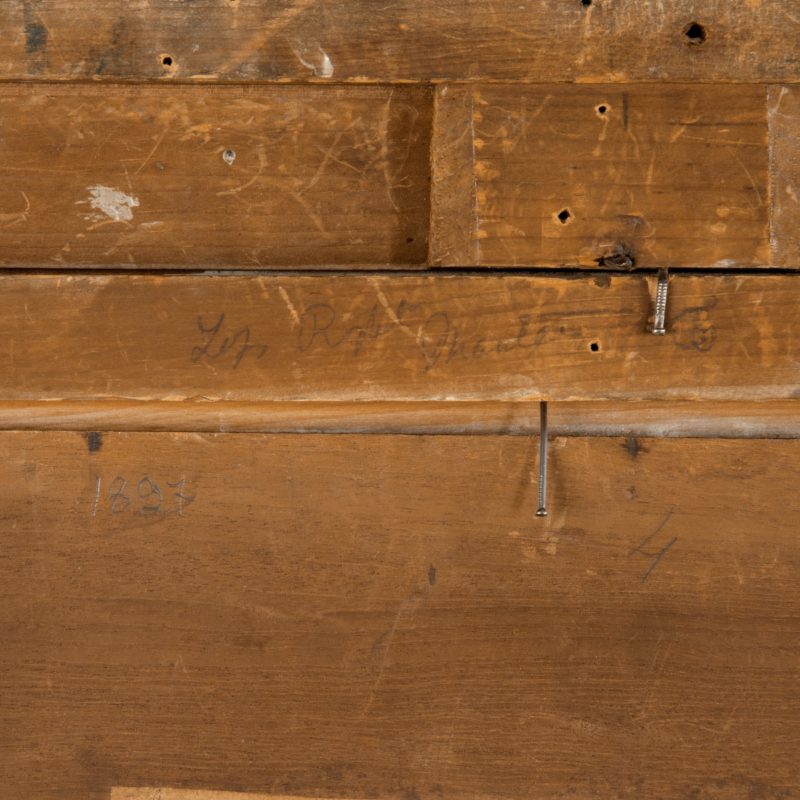 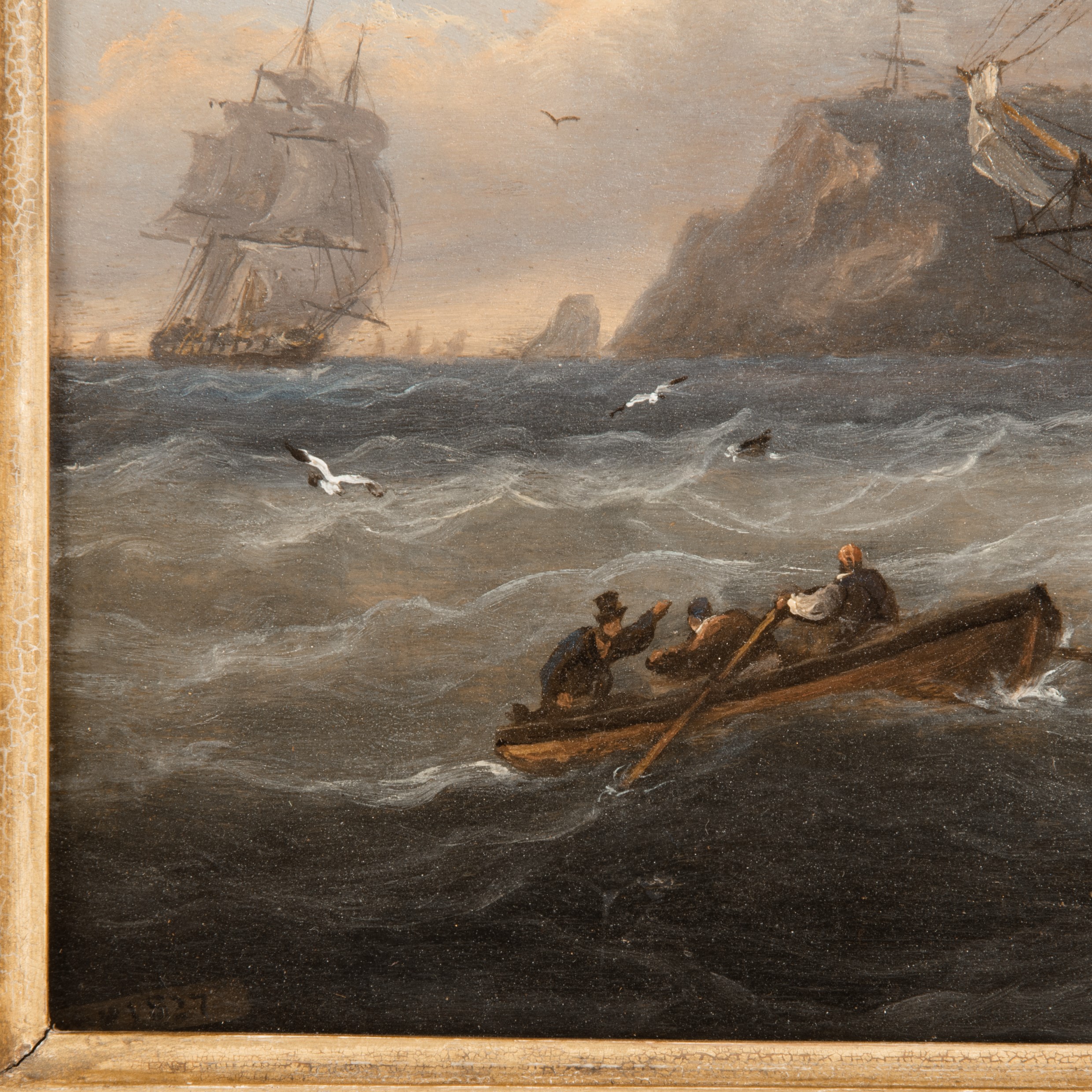 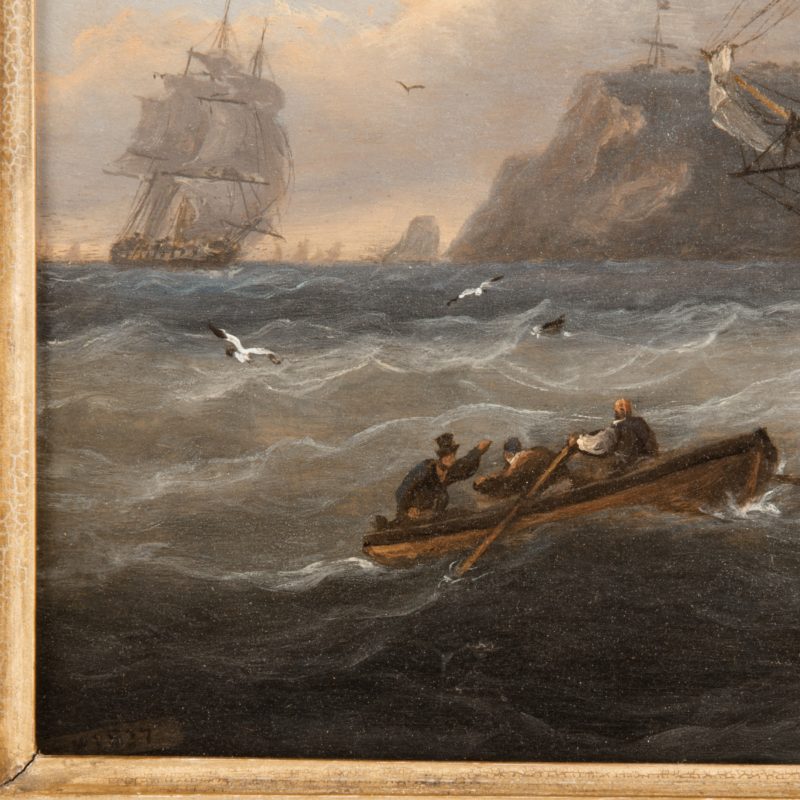 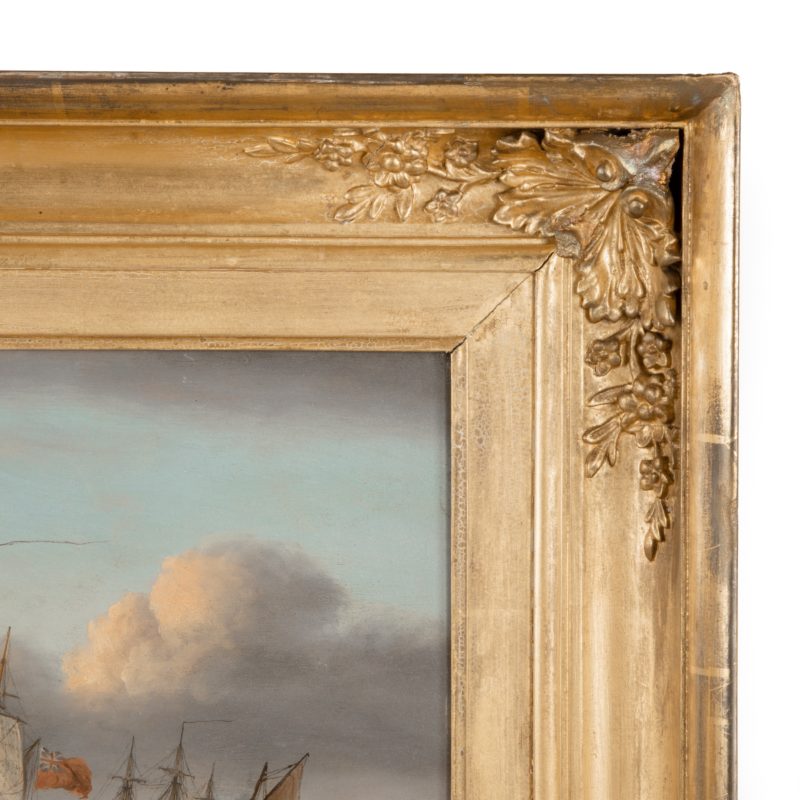 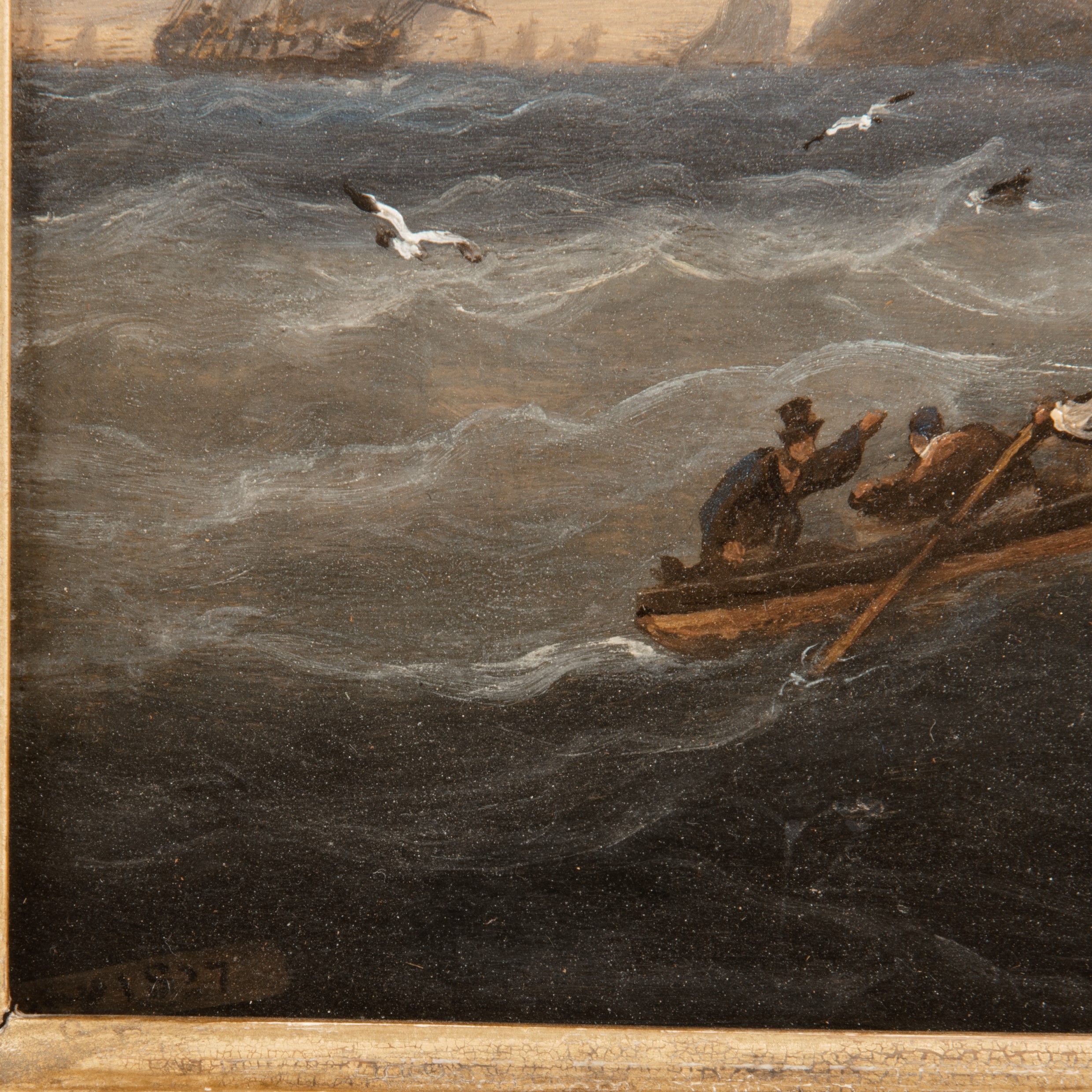 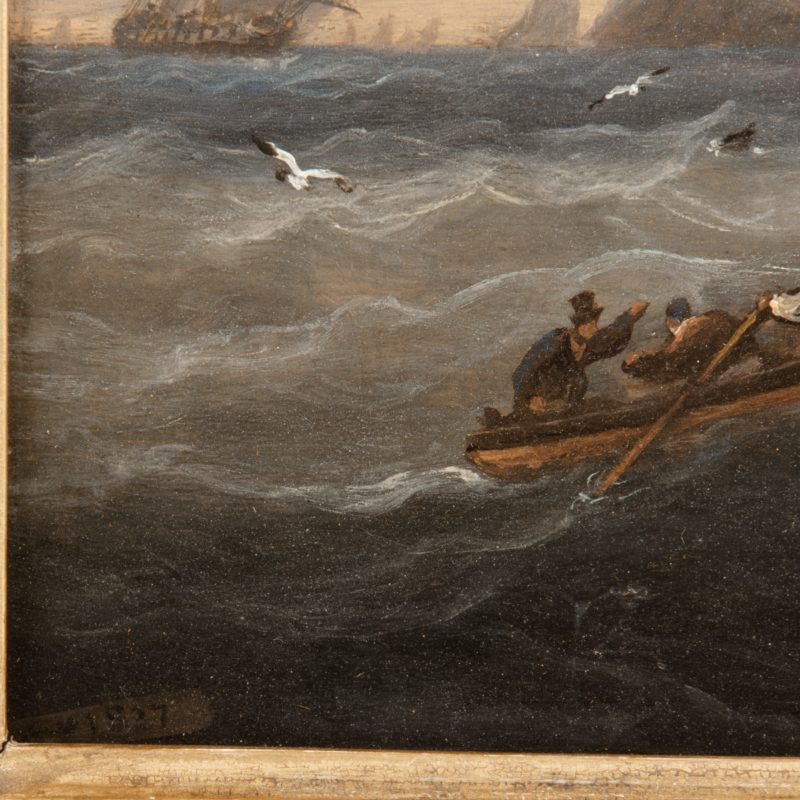 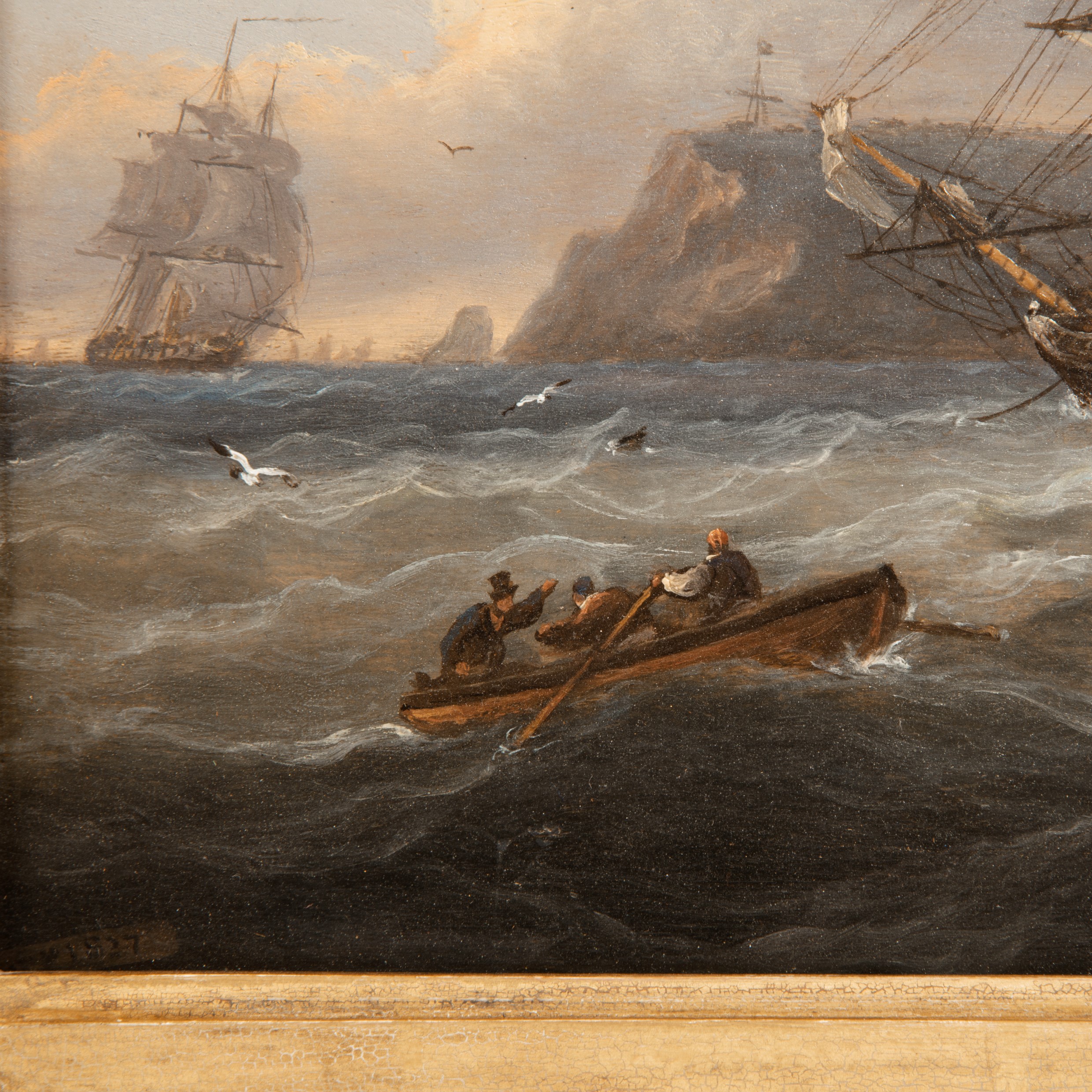 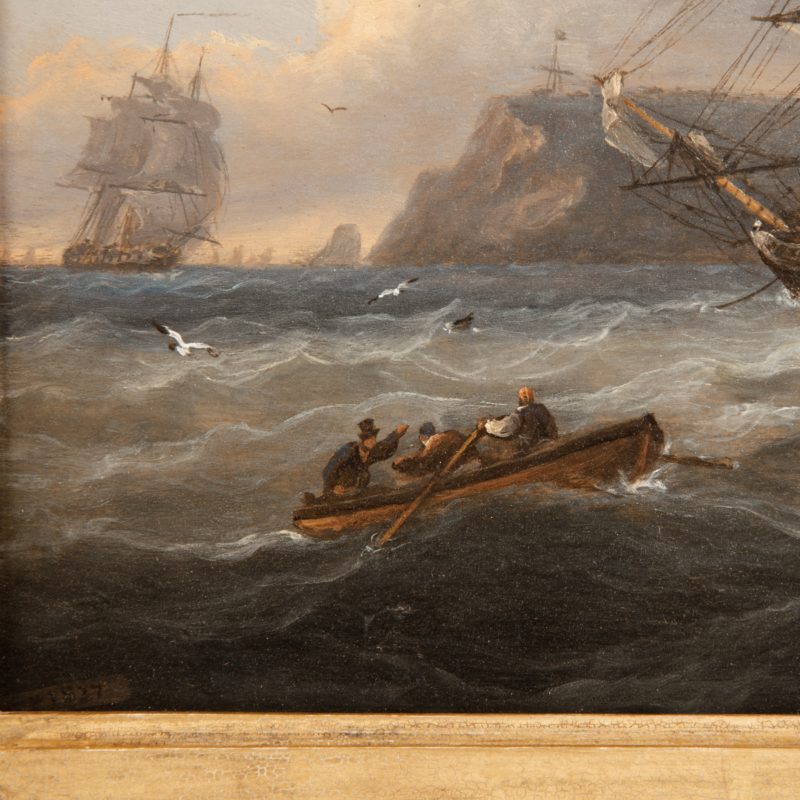 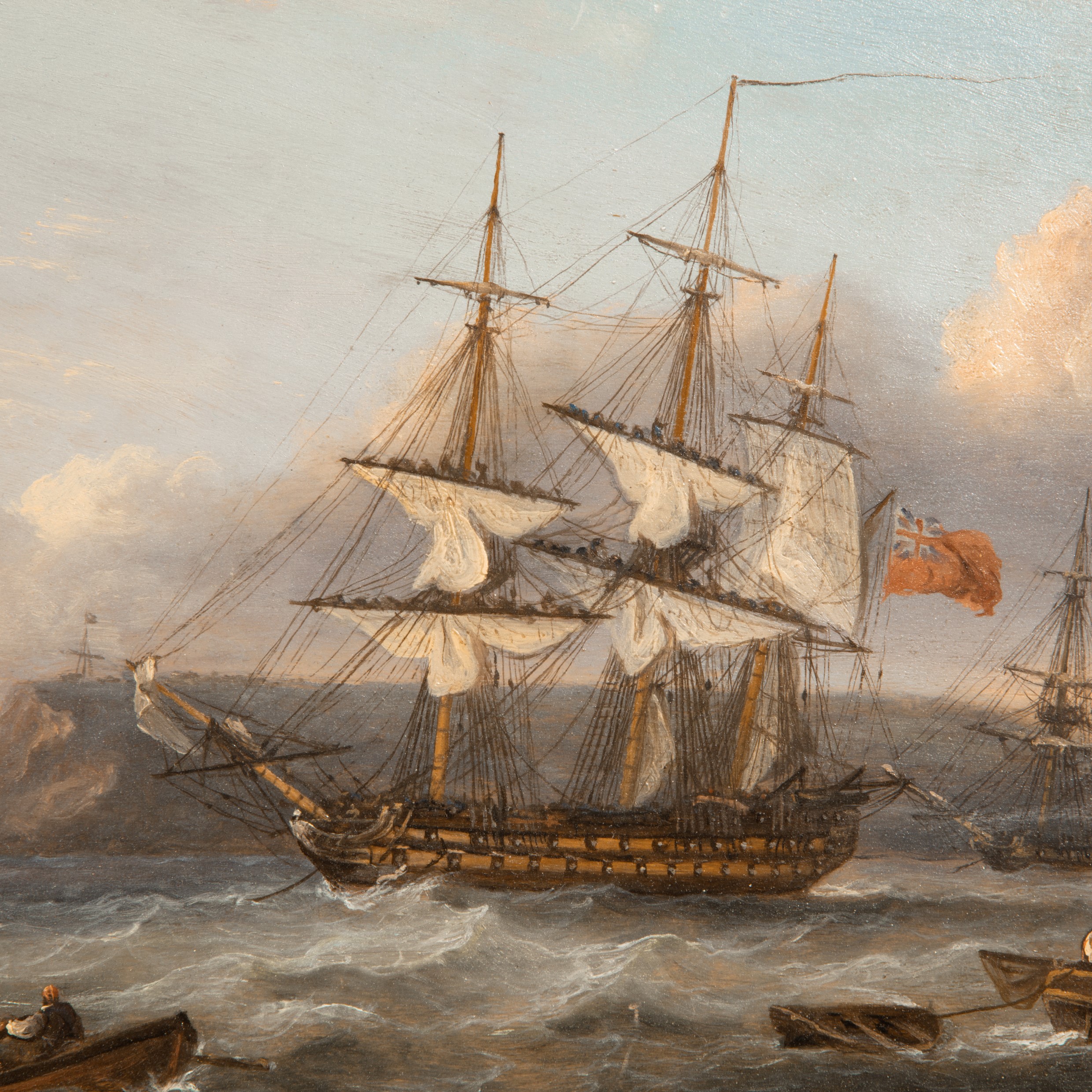 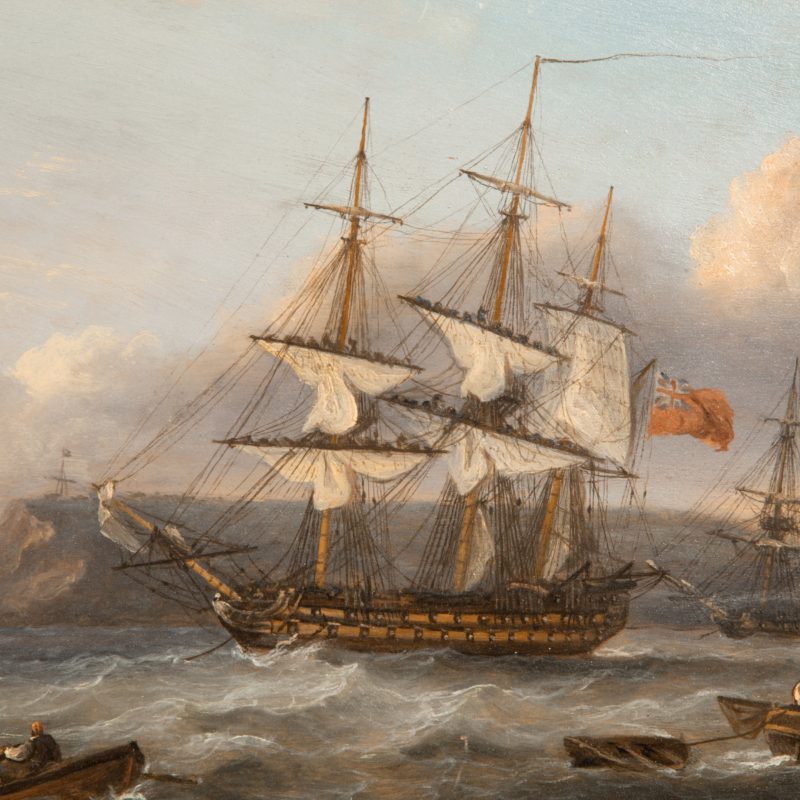 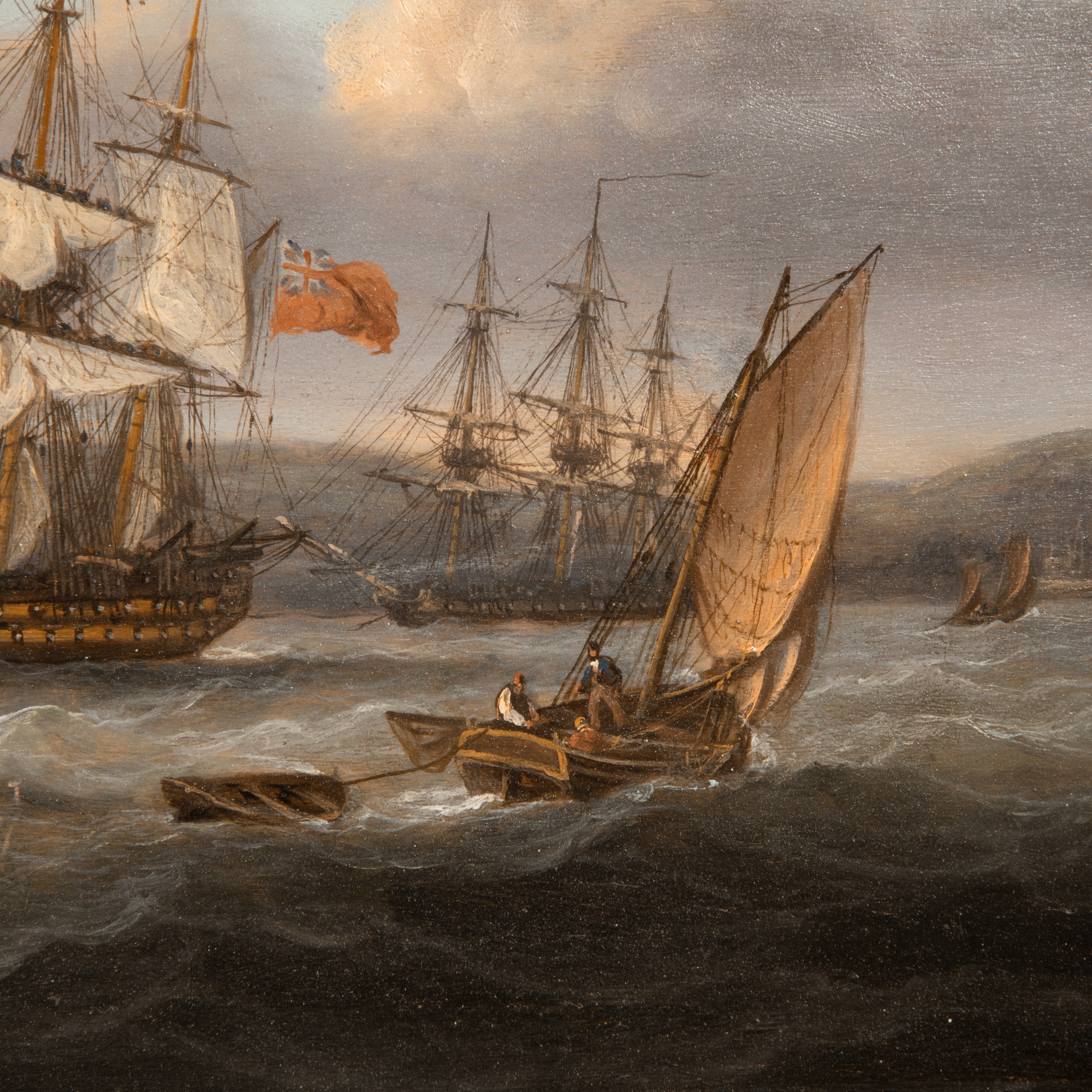 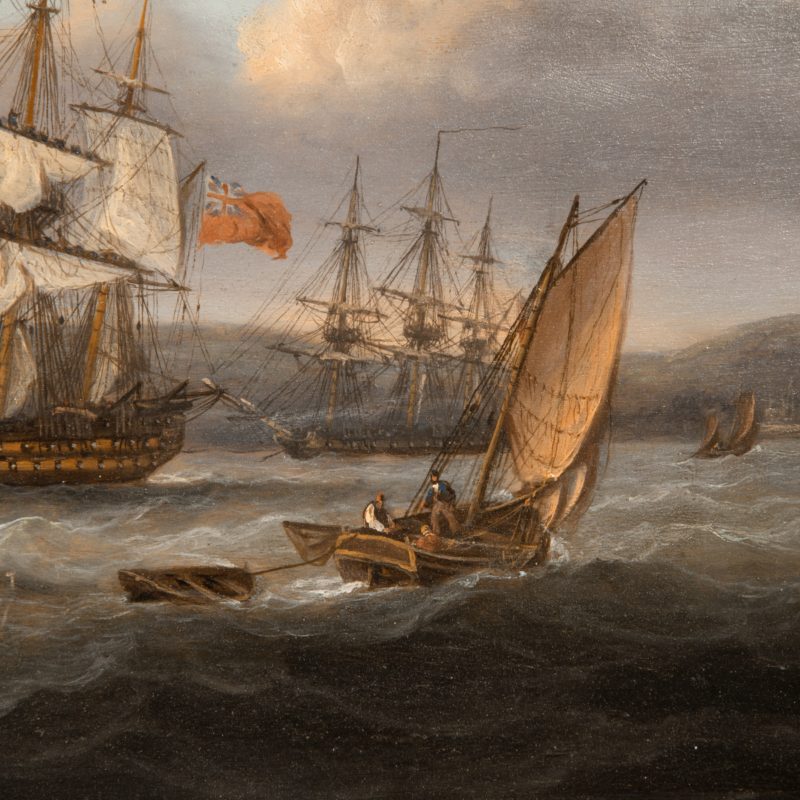 THOMAS LUNY (BRITISH, 1759-1837)  HMS Bellerophon leaving Torbay with the defeated Emperor Napoleon aboard, 26th July 1815, this oil on panel shows the crew manning the yards to bring in the sails, having just dropped anchor in Torbay, with another battleship anchored astern and a further ship under sail in the distance, the foreground with working boats approaching, signed and dated ‘Luny 1827’(lower left). In the original gilt-wood frame.

Footnote:  Despite a service career as illustrious as any fighting ship in the Royal Navy, Bellerophon is principally remembered as the vessel to whose captain Emperor Napoleon surrendered after Waterloo and which then conveyed him to Plymouth, via Torbay, on the first stage of his long journey into exile.

One of the fourteen ‘Arrogant’ class 74-gun Third Rates designed by Surveyor Slade in 1758, Bellerophon was built in Edward Greaves’ yard on the Medway at Frindsbury, near Rochester, where her keel was laid in May 1782. Launched on 17th October 1786, she was measured by her builder at 1,613 tons and was 168 feet in length with a 47 foot beam. Completed at Chatham in March 1787 at a total cost of £38,608, she was laid up for three years until fitted for sea in August 1790 and commissioned under Captain Thomas Pasley. By 1794 Pasley had been promoted to Rear-Admiral and Bellerophon acted as his flagship at the battle of the ‘Glorious First of June’ where she engaged the huge 110-gun Révolutionnaire alone for an hour-and-a-half before the Russell and the Marlborough came to her assistance. Because of the damage she had sustained aloft, Bellerophon had then to withdraw from the scene but her conduct at this opening fleet action of the War laid the foundations for what was to follow.

By the time Nelson located the French fleet anchored in Aboukir Bay on 1st August 1798, Bellerophon was commanded by Captain Henry Derby and when he took his ship in to engage the enemy she found herself pitted against Admiral Bruey’s 120-gun flagship L’Orient. In a fierce action exactly reminiscent of what had happened at the ‘Glorious First of June’, Bellerophon pounded her greatly superior adversary but was completely dismasted in so doing. Despite heavy casualties, including Captain Derby, she remained at her station and was the nearest vessel to L’Orient when the latter finally blew up during the night. Repaired and refitted, she was continually in action until Trafalgar where, under Captain John Cooke, she fought nobly, first against the combined fire of four enemy vessels, then in a spectacular duel with L’Aigle and, finally, with the Spanish Monarca which surrendered to her. Her gallant fight cost her the second highest casualty list at the battle and amongst the dead was Captain Cooke himself.

After extensive repairs at Plymouth, she returned to sea and, by the War end, it was said that “during the period 1793-1815, she saw more action than any other ship.” Her enduring claim to fame however came when, after fleeing the field at Waterloo, the defeated Emperor Napoleon made his way to Rochefort where, on 15th July [1815], he surrendered to Captain Maitland of the Bellerophon. Maitland had been sent to Rochefort when intelligence reached the Admiralty that Napoleon was planning to embark there for America; in the event, the Emperor chose to place himself under the protection of British law, whereupon Maitland sailed for England, Napoleon catching his final glimpse of the French coast (off Ushant) on 23rd July. The English coast was sighted the same evening and, early the next morning, Bellerophon anchored in Torbay where Maitland awaited his orders. As soon as news of the former Emperor’s arrival became known, presumably by means of a careless word ashore from one of the ship’s officers, large numbers of small craft packed with curious spectators made for the ship and provided a carnival atmosphere all around her. Two days later, on the 26th, Maitland weighed anchor for Plymouth where he and his celebrated passenger arrived within hours; Napoleon remained aboard Bellerophon for twelve days whilst the government decided what to do with him and, on 7th August, he transferred into H.M.S. Northumberland and embarked for St. Helena and exile. With the War over and the need for warships sharply decreased, Bellerophon was afterwards fitted out as a convict hulk and served thus for the remainder of her career, being renamed Captivity in 1824, until broken up in 1836.